by Elizabeth Claire Alberts on 25 March 2022

The Great Barrier Reef is experiencing a sixth mass bleaching event, the marine park’s authority confirmed today after completing aerial surveys of the region. This is the fourth time the region has bleached in the past six years, raising concerns that the world’s largest reef system will be unable to recover.

The current bleaching event is impacting all four management zones of the Great Barrier Reef, with the most severe bleaching happening in a 650-kilometer (400-mile) span between Cooktown, Queensland, and the Whitsunday Islands, said Neal Cantin, a research scientist at the Australian Institute of Marine Science involved in this year’s surveys.

“The frequency of severe bleaching is going to make it harder for the reef to recover,” Cantin told Mongabay in a video interview. “Certainly there’s been signs of natural recovery throughout a lot of the Great Barrier Reef since the 2016 and 2017 bleaching events. We hope that that will be the case following this event. But certainly, we’re seeing signs of mortality during the aerial surveys.”

The region is presently going through a climate pattern known as a La Niña, which would typically bring monsoons, heavy rain and cooler temperatures. But this year, the majority of the rain occurred further south, bringing record-breaking floods to a vast area between Brisbane and Sydney. Sea surface temperatures around the Great Barrier Reef have also been higher than normal, with some temperature anomalies more than 3.5° Celsius (6.3° Fahrenheit) above average, Cantin said. 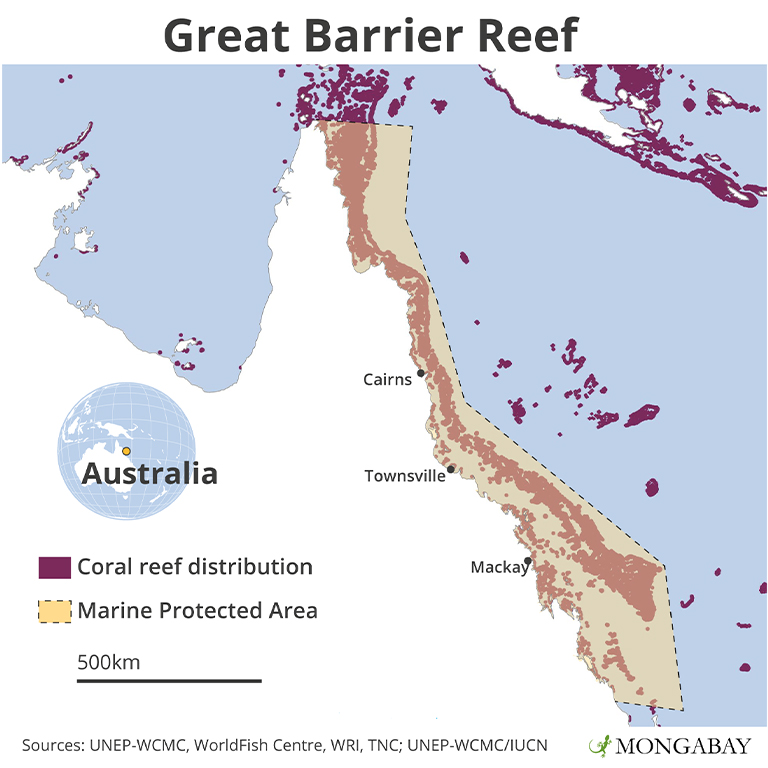 “The ocean warming signal for this region has really escalated beyond normal La Niña years in the past,” Cantin said. “The biggest threat to the Great Barrier Reef and reefs globally is the rate of ocean warming associated with climate change.”

While heat stress and bleaching does not automatically kill coral, Cantin said that a lot of mortality had already taken place.

“When you start to see bright green algae overgrowing white skeleton, it’s a clear sign of intense heat, pushing that coral beyond its survival capacity,” he said. “You can definitely see mortality at the peak of the event. Not all of the colonies are at that point [but] we won’t know the survival rate of bleached corals for the next few months.”

Cantin said that while the 2016 and 2017 bleaching events had more extreme heat, this year’s event is impacting a much larger area of the Great Barrier Reef. However, a full analysis of the bleaching event’s spatial footprint will not be available for at least a few weeks, he added.

Richard Leck, the head of oceans and sustainable development at WWF-Australia, said this was a “very concerning moment on the Great Barrier Reef,” adding that some reefs appear to have experienced bleaching on 90% of the corals.

“At this stage, we’re averaging a bleaching event more than once every two years, which is really climate change writ large,” Leck told Mongabay in a phone interview. “To have those events happening so regularly, it really isn’t giving the reef the time it takes to recover.”

According to WWF, the mass bleaching announcement occurred right around the time when a U.N. monitoring group arrived in Queensland to assess whether the Great Barrier Reef should be added to the World Heritage in Danger list. Last year, the Australian government successfully lobbied to block the Great Barrier Reef being placed on this list, despite U.N. advice to the contrary. It was also revealed that the current government led by Scott Morrison argued that the wording in the latest report from the Intergovernmental Panel on Climate Change should not indicate that the Great Barrier Reef was in crisis.

“The timing is quite extraordinary,” Leck said in a statement. “The world heritage experts should be given the opportunity to see firsthand what climate change is doing to the Great Barrier Reef.”

On the other side of Australia, high sea surface temperatures have also caused coral bleaching in the Kimberley, Dampier Archipelago and Exmouth Gulf regions of Western Australia, according to the Western Australian Coral Bleaching Group. With temperatures expected to rise even higher next month, bleaching may also occur at places like Ningaloo Reef, Shark Bay and Rottnest Island, the group said.

While the outlook for the Great Barrier Reef and other reefs around Australia looks grim, Leck said that Australia has the ability to play a key role in bringing down global emissions by turning to renewable and clean energy sources.

“There is a lot that is within our power to change,” he said.