‘Small-scale fishers have a Ph.D. in the ocean’: Q&A with Vatosoa Rakotondrazafy

by Malavika Vyawahare on 8 March 2022

As a young woman, Vatosoa Rakotondrazafy is not the obvious choice as a spokesperson for a sector dominated by men.  Yet, today she is one of the most recognizable faces in marine conservation and a staunch advocate for small-scale fishers’ rights. Rakotondrazafy contends she is not their representative, but rather is helping coastal residents represent themselves.

Rakotondrazafy completed graduate studies in geography at the University of Antananarivo and went on to research ocean governance and fisheries policy in the U.S. and Canada. However, she says it is her work in Madagascar, the time spent living and engaging with coastal communities, that showed her what governing the ocean looks like.

With 1.2 million square km (463,000 square miles) of territorial waters, Madagascar is still mapping and learning to manage its marine wealth. The island, larger than California, is also very exposed to cyclones. This year, a series of storms including the intense Cyclone Batsirai, wreaked havoc, killing scores and displacing thousands, especially in coastal areas. 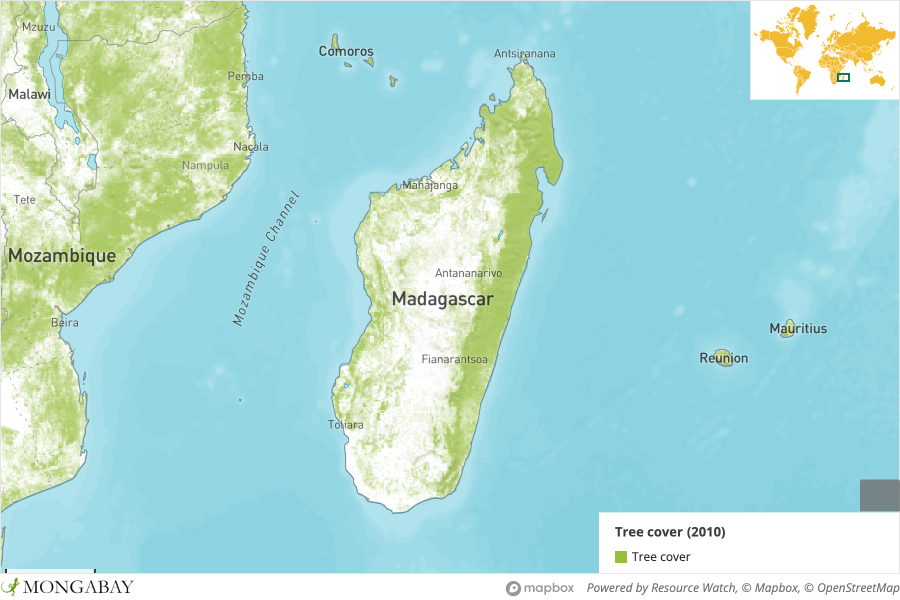 Rakotondrazafy won the Whitley award in 2019 for her work with Mihari (Mitantana Harena Ranomasina avy eny Ifotony), a network of locally managed marine areas (LMMAs). She says LMMAs could be the way forward for the country to sustainably manage its expansive marine area.

LMMAs are not marine protected areas. They are parcels of a country’s nearshore waters that are under community management. This includes deciding which sites to fish, what to leave undisturbed, which gear to use, and what species to harvest. There is a particular emphasis on coastal residents setting the agenda, not outsiders, be they funders, NGOs or government officials.

Promoting conservation is not an explicit requirement for an LMMA, but most incorporate some version of sustainability. Another common feature is blending traditional know-how with recently acquired knowledge about marine spatial planning, animal behavior and the intricacies of oceanic ecosystems.

In 2012, 18 LMMA communities from southwest Madagascar banded together with help from local and foreign NGOs like Blue Ventures to form the organization Mihari. Their work gained momentum in 2015 with a fresh injection of funds, and Rakotondrazafy came on board as national coordinator, becoming the network’s first full-time employee.

Rakotondrazafy says the remoteness of coastal settlements and a lack of formal education made it hard to diffuse knowledge among communities and kept them from relaying their concerns to decision-makers. She was also disappointed by the absence of women and women’s voices in Mihari’s engagements. It wasn’t just in the fishing communities. Even as the network grew, until 2018, she was the only female employee at Mihari. Rakotondrazafy helped launch the FisherWomen Leadership Program (FWLP) in 2020.

In late 2020, she left Mihari to co-found INDRI (l’Initiative pour le Développement, la Restauration écologique et l’Innovation), a Malagasy think tank. Rakotondrazafy spoke to Mongabay over the phone about how a city girl and a stranger to the local Vezo tongue spoken by many of Madagascar’s fishing communities, came to become the “Mama of LMMAs.”

Mongabay: Can you tell me how you became a conservationist? Do you consider yourself as one?

Vatosoa Rakotondrazafy: It was not my plan to work on the environment. I was interested in human rights. So I pledged to become a lawyer. But I failed the law exam and did a degree in geography instead.

I wanted to become a lawyer because I wanted to defend the rights of vulnerable populations. I thought working for Mihari would allow me to be a lawyer for vulnerable small-scale fishers.

Mongabay: Why are these communities marginalized?

Vatosoa Rakotondrazafy: Madagascar is a big island. Most small-scale fishers live on the coast in isolated, remote areas. They do not have access to basic needs, like education, health care, or the market. They struggle to sell their products because they are too far, or they don’t have the proper storage equipment like coolers to store their product. If they cannot sell it in the village, they have to throw their catch away.

They live from the sea. This means if we have cyclones or other natural disasters, some of those small-scale fishers don’t have anything to eat. Last year, I visited small-scale fishers in the southeast of Madagascar, and there was bad weather for a few days. They didn’t have any fish, so we ate meat. It was a kind of meat that humans do not normally eat. I think it was the liver of zebu [cattle].

Mongabay: Since you don’t come from a fishing community, was it challenging to work with the fishers?

Vatosoa Rakotondrazafy: It was really challenging. I come from the capital, and the small-scale fishers were on the coast. We have 18 dialects and, at first, we could not understand each other. I had to come with a translator when I visited them. I thought to myself, how can the fishers trust me as a young woman from the capital who doesn’t know anything about small-scale fisheries? I do not belong to them. It was weird.

But then it changed. Now, they call me the mama of LMMAs.

Mongabay: How did you win the trust of the communities?

Vatosoa Rakotondrazafy: Because most small-scale fishers are not educated, sometimes we think we know more than them. I have a master’s degree, but when I worked with small-scale fishers, I forgot about my master’s degree. I valued their traditional knowledge because I’m really amazed at how well they know the ocean. They do not have higher education, but for me, they have a Ph.D. in the ocean.

I gained their trust by letting them know they need their traditional knowledge to conserve the area better.

Mongabay: When you talk about fighting for the rights of small-scale fishers, who or what are they fighting against?

Vatosoa Rakotondrazafy: It’s not really fighting. There was a misunderstanding between industrial and traditional fisheries. Traditional fishers were complaining that the industrial ones were taking all of the resources and fishing near the coast. Also, the small-scale fishers don’t know who the industrial fishers are and what they are catching. They are just afraid when they see big boats not far from where they fish.

Mongabay: Do women play a role in small-scale fisheries?

Vatosoa Rakotondrazafy: It’s a man’s world. For example, when I organized the National Fisheries Forum — I have organized maybe 10 or more — if we had 100 small-scale fishers, only two were women, and the women don’t talk. When I asked them, why are you not talking, they say that the fisheries stuff is for men, they have to take care of the home, and it is difficult for them to travel because they have children.

Based on all of that, in 2020, I launched the FisherWomen Leadership Program to empower women in fisheries. I think in the southwest of Madagascar, more than 50% of the octopus cleaners are women. But we don’t see those women. When we launched that program, we involved men too to make sure they could see what it is like to have women leaders.

Mongabay: What does valuing traditional knowledge mean? How do you incorporate that knowledge into decision-making?

Vatosoa Rakotondrazafy: Mihari is for representing the voices of the small-scale fishers, so they are consulted when high-level decisions are taken or making national strategies, for example about industrial fisheries or fishing regulations. We inform them if there is any new legislation or any new information they need to be aware of, and then we do consultations.

When steering committees are created at the government level, we make sure that Mihari is represented and that small fishers are integrated into that committee. We make sure that if there are national workshops in Antananarivo, Mihari is invited, and we bring small-scale fishers to talk about what is happening in the field.

Mongabay: Is their knowledge taken seriously once they are at the table?

Mongabay: Is there something that they wanted and managed to get because they were at the table?

Vatosoa Rakotondrazafy: One of the biggest lobbying activities we did was to get a motion for reserving a fishing area for traditional fishers.

In 2017, we organized a national fisheries forum, and there the small-scale fishers put forward three motions. The first one was for formalization and implementation of [traditional] dina bylaws that govern natural resources management within LMMAs. The second is the regulation of destructive fishing gears, and the last one is the creation of an exclusive fishing zone for small-scale fishers.

In 2018, the former minister of fisheries agreed to consider reserving an area for small-scale fishers. In 2021, there was a law that trawlers cannot operate within 2 [nautical] miles [3.7 kilometers] from the country’s coast.

We also want a national framework for LMMAs in Madagascar. We requested a meeting with the government ministries. They welcomed small-scale fishers. They asked fishers why it is important to have that legal framework. , we brought different stakeholders from the government to see the reality of LMMAs.

Mongabay: Are you disappointed that LMMAs are still not recognized in the national legal framework?

Vatosoa Rakotondrazafy: I would say LMMAs are recognized because even the Ministry of Fisheries recognizes that they’ve seen behavior change when fishers create LMMAs. It’s just the formal recognition that doesn’t exist. For now, it is not an issue. But I think it could be really helpful if we have a formal LMMA policy explaining the history of LMMAs, how many there are, what they do, and the rights of fishers. This means that if they have challenges, you can see what their rights are in the document.

Mongabay: You worked briefly for the government, then at the Mihari network. What inspired you to co-found INDRI?

Vatosoa Rakotondrazafy: It is to mobilize the collective intelligence of all stakeholders to find solutions to sensitive issues. This kind of national platform has never existed because people are working in silos.

My new job is as national coordinator of terrestrial landscapes and seascapes at INDRI. There were two reasons for the decision. First, Madagascar is losing its forests. We were known as the Green Island, now we are known as the Red Island. It’s an emergency to save Madagascar’s forests.

With Mihari, I saw that there is some kind of lobbying that we don’t win because we are just at the community level. It can be helpful to have another organization, a think tank where funders, private sector actors like industrial fisheries, civil society, small-scale fishers, and researchers can get together.

For example, for the Agora Forest [project], we worked on how to fight forest fires. We have experts, but we also consult citizens who use charcoal. Based on all the interviews, online consultations, workshops, meetings with stakeholders in the field, we produced a national road map for the issue.

Mongabay: Do you think the solutions will have more power? More sway with government and funders?

Vatosoa Rakotondrazafy: Yeah, I think so. We involved the government in the platform. For example, we have produced a document with 11 measures to fight against fires. The government was involved in the drafting of that document.

Mongabay: Does it make a difference that INDRI is a Malagasy think tank? Is there a gap it is trying to fill?