Civil conflict in Cameroon puts endangered chimpanzees in the crosshairs

Lazarus Nwobegai, who holds a government permit to harvest timber around Mount Cameroon National Park, knows perfectly well it’s illegal to hunt the chimpanzees and other threatened primates that live on the mountain’s slopes. But that, he says, isn’t enough of a deterrent for himself and his companions.

“We come across most of these primate species we are talking about and even hunt them,” Nwobegai says. “The paradox here is that wildlife officials and other security agencies that are supposed to prohibit us from hunting them are the ones who encourage us to hunt and give to them as bribes or sell to them to take home to their loved ones.”

More than a decade after Mount Cameroon and its surroundings were declared a protected area, the persistence of the attitudes described by Nwobegai sharply illustrate the challenges facing the park and its peripheries: the combined and growing pressures of armed conflict, population growth, agricultural incursions, weak governance, and steady demand for timber, bushmeat and other forest products.

An arc of biodiversity

At 4,100 meters (13,450 feet) above sea level, Mount Cameroon is the highest mountain in West and Central Africa. Rising from lowland rainforest at its foot to alpine grassland at its summit, the mountain is a unique biodiversity hotspot with many endemic flora and fauna. It also hosts endangered and threatened primates, including Nigeria-Cameroon chimpanzees (Pan troglodytes ellioti), drills (Mandrillus leucophaeus) and Preuss’s guenon (Allochrocebus preussi preussi), as well as other large animals including forest elephants (Loxodonta cyclotis) and several varieties of duikers.

With the creation of Mount Cameroon National Park in 2009, 58,178 hectares (143,761 acres) of the mountain and its surroundings gained formal protection. In addition, multiple neighboring forests share some degree of protection, including the Southern Bakundo, Monono and Bomboko forests reserves, and three community forests bordering the park: Etinde, Bakingili and Woteva.

The park’s 2015-2019 management plan says that “by 2025, the Mt. Cameroon National Park ecosystem, biodiversity, environmental services and its integrity will be managed effectively with the participation of all stakeholders and will be recognized as a worldwide ecotourism destination.”

With that goal just a few years away, park authorities can count a few successes. Thomas Esoka , the park’s biomonitoring and research officer, says government pressure on illegal hunting has led to an increase in the area’s chimpanzee population. According to Esoka, there are now close to 1,000 chimpanzees in the Buea and West Coast clusters, at the park’s southern and eastern ends. Elsewhere in the park, however, numbers are uncertain. “Unfortunately, there are no figures for the Muyuka and Bomboko clusters where conflict has led to the halting of activities for about five years now,” Esoka says.

Biomonitoring, research and community outreach efforts have been disrupted by conflict that has wracked the area near the park since 2016.

The crisis is rooted in Cameroon’s troubled colonial history. Upon independence in 1960, the country inherited two distinct and uneasily coexisting traditions: one French-oriented and the other British-oriented, each with distinct systems of education, justice and governance. In October 2016, Anglophone lawyers’ and teachers’ unions launched peaceful street demonstrations against the obligatory use of French in schools and courts in the country’s two English-speaking regions, which are home to about 5 million of Cameroon’s 24 million people.

Following the suppression of protests, the conflict degenerated into a secessionist armed struggle for the independence of a country called Ambazonia.

About 2.2 million people in the two English-speaking regions have been affected by the conflict, including some 3,000 people killed and 956,000 internally displaced, according to the local U.N. Office for the Coordination of Humanitarian Affairs.

This conflict has also taken a toll on the park and its wildlife, says Ndimuh Bertrand, executive director of the NGO Voice of Nature (VoNAT), based in the locality of Buea and currently carrying out a great apes conservation project around the park. “Over 700,000 people have fled their homes, villages razed, and those fleeing, especially women who hitherto depended on farming, are now seeking safety around the Mount Cameroon area especially the Buea and Idenau clusters which are relatively safe.”

This influx of refugees puts a strain on the forest, Bertrand says. “Where the internally displaced persons don’t have skills to get financial and other resources, they encroach into the park for farming.” 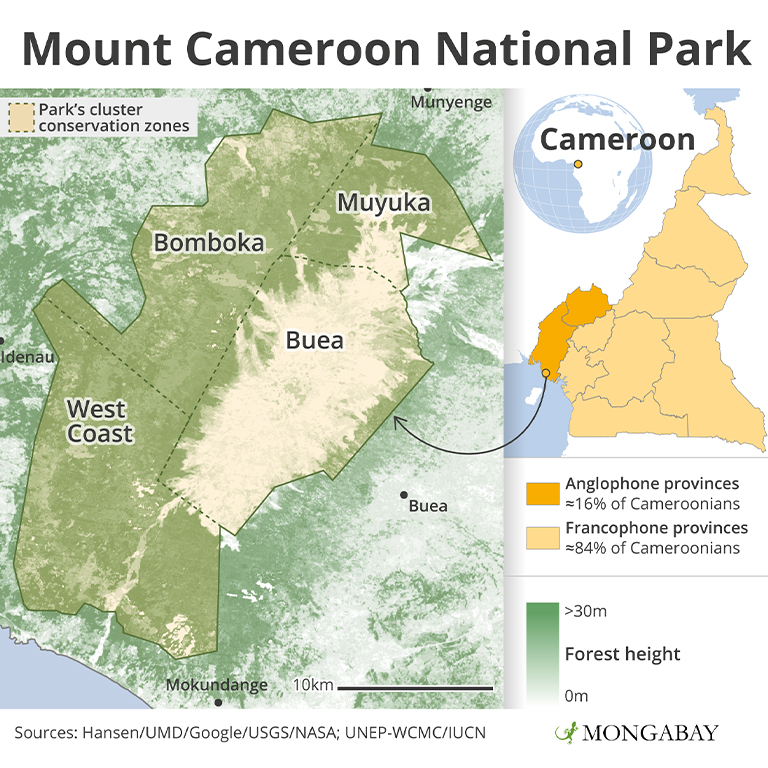 In other areas, Bertrand says, armed combatants have built camps in the forest. “They threaten the apes with their presence,” he says. “Many conservation organizations have escaped with their lives; and so, no ongoing research to carry out informed decisions. Conservation education is limited only to villages that are more secured. In villages that there is presence of armed groups, conservation workers do not go there.” This, he says, not only makes it difficult to monitor species, but also increases the likelihood of apes being killed. “The continuous education sensitization and provision of alternative livelihood that have hitherto deterred communities from engaging in destructive activities are no longer there,” he says.

Regina Leke, an environmental journalist working in the region, says armed combatants also pose a direct threat to apes and other wildlife. “This park has become a home for armed groups,” she says. “When we have separatist fighters with … modern weapons living in the forest which hosts several endangered species, including chimpanzees, monkeys and others, it becomes easy to hunt the animals down because they are now fighting for space.”

In addition, Leke says, eco-guards on patrol are not always respected, and don’t have the resources or firepower to stand up to armed separatists. “Before the crisis there were threats. The crisis come to compound the situation,” Leke says.

Charlie Ntonifor, a conservationist with more than two decades of experience in Cameroon’s Southwest region, concurs. The threats to wildlife are numerous he says; at times the mountain itself can be a danger. “Mount Cameroon is a volcanic mountain,” Ntonifor says. “The last eruption in 1999 destroyed habitat, food sources and this has made great apes fragile. Worse still, human interventions have forced the great apes to push up near the volcano.”

“We have forest roads created by illegal logging,” he adds. “These cause apes to shift and [they] are exposed to attacked by poachers. Most poachers are from neighboring farming villages and they have huts on farms. These huts serve as a place for them to smoke bushmeat. Poachers are aware of laws, but because of corruption they go unpunished.

“Weak governance and corruption exacerbate the situation,” Ntonifor says. As the population grows, and as more and more people migrate into the area, agriculture has expanded into the park, especially cocoa plantations, he says. Large agribusiness companies, including the Cameroon Development Corporation and PAMOL Plantation Limited, have also moved into the area to produce palm oil, rubber and bananas.

Daniel Ndive, mayor of the district of Mokundange, which lies on the park’s periphery, says there’s high demand for land for homes and businesses in his district. Land that’s legally designated as part of the park has been “invaded,” he says, “even when we do not give them permission to construct houses there.” The problem, Ndive says, is extremely difficult to manage; influential actors in the issue range from local chiefs to judicial officials hold varying degrees of authority over land tenure. “This multiplicity of stakeholders in land management issues makes it extremely difficult to control intrusion into the park,” Ndive says.

Kombe Mbake, a tribal chief in Munyenge, one of the villages within the park, says the land around the mountain is exceptionally fertile. “Given that villagers, as well as other migrants are farmers, they rely on the forest for livelihood through clearing the forest to grown cocoa, which is their mainstay,” Mbake says. “It is from cocoa farming they get money to take care of their families and provide an education for their children.”

The use of forest resources extends beyond just agriculture. Wasa Therese, a small restaurant owner in Bova Bomboko, another village within the Bomboko cluster, says women in the community depend on forest products and wildlife to help support their households.

“I run this small restaurant where I also sell bushmeat,” Wasa says. “We have hunters who harvest the species from the forest and sell to us. Wildlife officials come here for controls. We know the animals they don’t want us to consume, especially ape species and other small animals. But despite their routine visits, the hunters still kill those animals and sell clandestinely.”

Nwobegai, the timber trader, says that restrictions ostensibly put in place to protect the forest can add to the problem. Because obtaining a license to exploit timber is so difficult, he says, people who manage to get one make the most use out of it, with little regard for the wildlife in the area. “Getting a license is very expensive. Sometimes we have to go through very corrupt networks to be able to get one. And once we get it, and equally pay huge taxes, we do everything to recover the money spent.”

In the face of seemingly intractable problems, Esoka, the park’s biomonitoring and research officer, points to a series of actions his team is taking. This includes getting feedback from local conservationists, taking legal action against those who violate the forestry regulations, gathering information from biomonitoring teams and camera trapping and using them to make decisions, and community outreach and education about protected species.

Ndimuh of the NGO VoNAT says that education efforts focus specifically on young people. “Those are our target and we know they will grow up with that consciousness,” he says. “If they are the ones to educate their parents, the parents will believe more in them.” His team has run conservation education programs for 120 children ages 7 to 18. “We use storytelling, folk tales, take them to forest environments, trying to resonate the culture of storytelling and local conservation ethics,” he says. Children are also invited to take part in biomonitoring, going to the forest to look for dung and other signs of apes. “In doing that, we reconnect them to nature, especially as some of them doubt that some of these species exist,” Bertrand says. By July 2022, the group aims to work with another 50 children around the park.

The NGO also makes available educational media and art such as conservation poetry, music, films and magazines, which it distributes to organizations working around the park.

However, a 2016 study on local community involvement in Mount Cameroon National Park found that although 95.4% of respondents supported the park project, only 34.7% had ever taken part in forest management activities; the most commonly cited reason for lack of participation was never having been invited to do so. Respondents wanted more mobilization and sensitization, direct employment and incentives to get them on board.

Authorities in Cameroon have made consistent efforts to protect apes and other species: tightening wildlife protection laws in 1994, declaring Mount Cameroon National Park, and developing strategic management plans. But armed conflict, the increase in the human population and activity in and around the park, corruption, and weak implementation of existing regulations all present challenges and point to the need for broader and more effective conservation measures.

“If we don’t redouble effort,” says conservationist Ntonifor, “there will come a time the Mount Cameroon forests will be there but there will be no apes.”