Brazil’s ecosystem of crime in the Amazon (commentary)

by Laura Waisbich; Melina Risso; and Ilona Szabo on 21 March 2022

It’s a long way from Kyiv to Itaituba, but Brazil’s busy wildcat gold prospectors don’t need a map. The war on Ukraine has sent international gold prices soaring and word in the Amazon basin is spreading faster than claim-staker’s quicksilver.

This city in the eastern Amazonian state of Pará is a longtime hub for miners, their commercial enablers and a fleet of puddle jumpers that service the dozens of gold pits cratering the banks of the Tapajos river. Not surprisingly, the garimpeiros – as miners are known – are mobilizing.  So should the Brazilian authorities. Every uptick in gold prices translates unfailingly into new assaults on the rainforest. If the miners make good on their pledge, our research at the Igarapé Institute shows, it will represent yet another offensive in Brazil’s losing battle for the environment, sensible development, the integrity of indigenous groups and the rule of law.

Keeping the Amazon intact and its inhabitants safe is a job that is never done. Late last year, federal police raided an Amazon gold operation organized on a scale rarely seen. Even as world leaders and top executives fretted in Glasgow over the gathering climate crisis, the Brazilian Feds found a real time environmental disaster: Hundreds of floating gold dredges spanned the girth of the Tapajos, packed so tightly they looked like a floating bridge.

Wielding high pressure pumps, a small army of miners dredged the river bottoms for gold, all the while trashing forests and fouling watersheds. Police made arrests, seized equipment and torched what they couldn’t remove. The bust set the miners back 14 million reais (around $2.8 million). But not for long.

On March 11, a group calling itself the Independent Miners of the Upper Tapajós blocked highway BR-163, a major agribusiness route used to haul grain from the ever expanding Brazilian farm belt to southern ports. The blockade, which backed up traffic for 30 kilometers, was described as a reprisal for last year’s police raid. It may also be a glimpse of the mayhem to come.

In Brasilia’s playbook, the real threat to the rainforest is an international conspiracy. “We have what no one else does: the Amazon forest,” President Jair Bolsonaro warned in a recent webcast. So how to assure that Brazil stays green and sovereign? “Maintain the armed forces capable of inhibiting possible foreign interference,” he added.

If only it were that simple. Drawing on records between 2016 and 2021, our team at Igarapé Institute  documented 369 federal police operations in the nine states of Brazil’s Legal Amazon. The federal agents were backed by some 50 other national and local institutions, from regulatory bodies to prosecutors and police.

Our study that wildcat excavators are just one reason Brazil’s security services have had their hands full. This is because the storied South American rainforest is not just a set piece for the tale of the 21st century environmental emergency. It is also an active crime scene.

Freelancers and retail opportunists are not the problem. While police operations targeted organized illegal forest clearing and environmental degradation, Igarapé’s study showed multiple task forces going up against a veritable shadow economy of resource predators, clandestine buyers, official enablers and cross-border money movers, all of whom thrive by razing the forest for quick bounty and dirty cash. 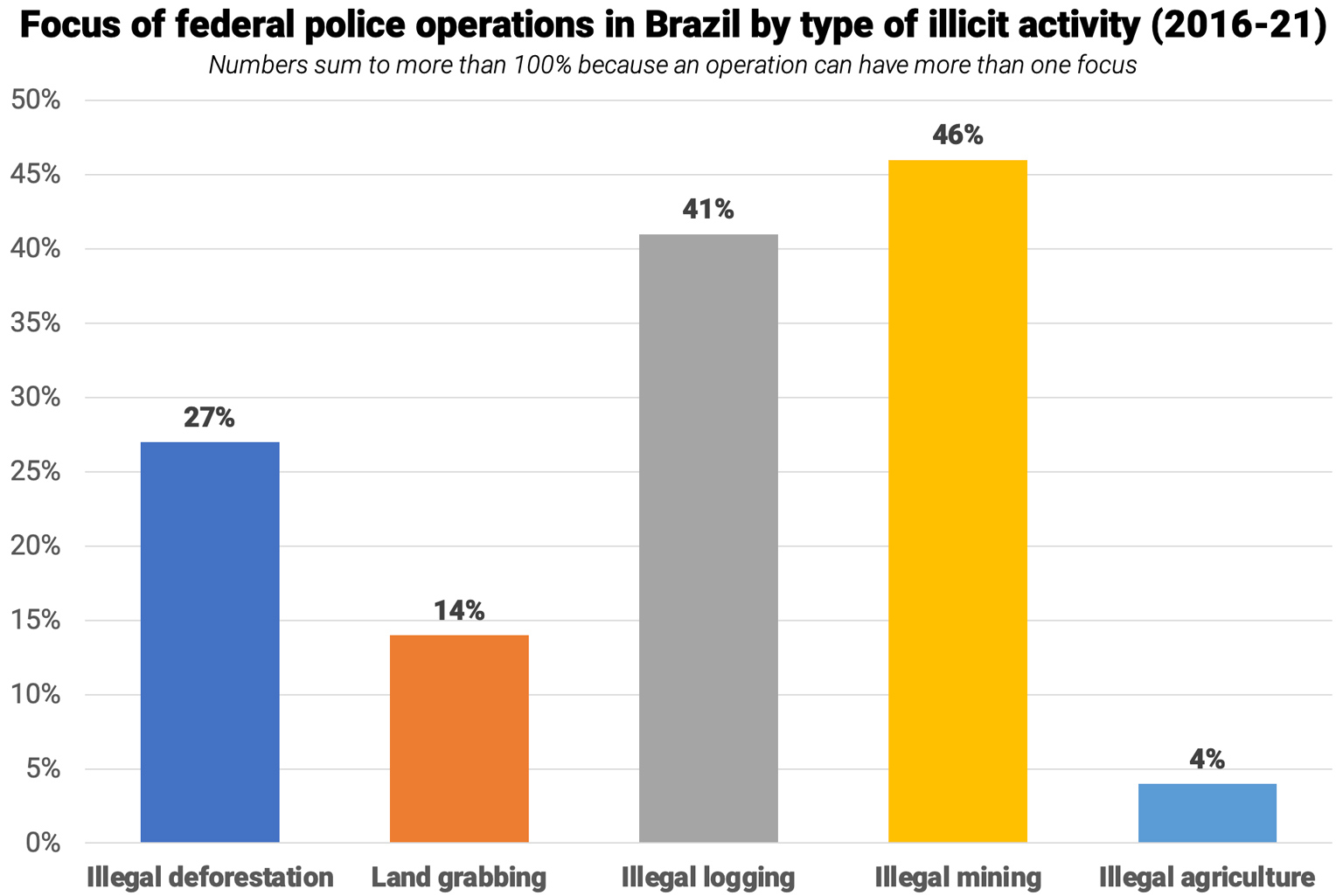 The criminal economies vary with the venue and the prize. In Rondônia, in the western Amazon, more than 40 percent of operations were triggered by illegal logging. Many others targeted illegal gold and diamond mining and unauthorized clear-cutting. Elsewhere, shady agriculture practices were tied to land grabbing and unauthorized deforestation. In most cases, police found themselves simultaneously tackling a combination of environmental crimes. And the illicit forest economies routinely rely on fraud, money laundering and tax evasion.

And yet while security forces have been diligent, their operations are often thinly staffed and widely scattered, which means that enforcers fight an asymmetrical battle against agile and moneyed outlaws. A paucity of official data on environmental offenses and the interlocking groups behind them keeps the authorities in the dark.

Complicating matters is the reflex among enforcers and bureaucrats to treat environmental violations as lesser crimes and their perpetrators as second-tier threats, compared with more charismatic outlaws such as drug traffickers or smugglers. That would be a mistake. Our research shows that criminals who make short work of the forest also often carry guns, steal land, intimidate local producers and authorities, defraud permits and buy favors. Half of the police ops we tracked pointed to organized crime (conspiracy), while weapons turned up in 21% of illegal mining busts. 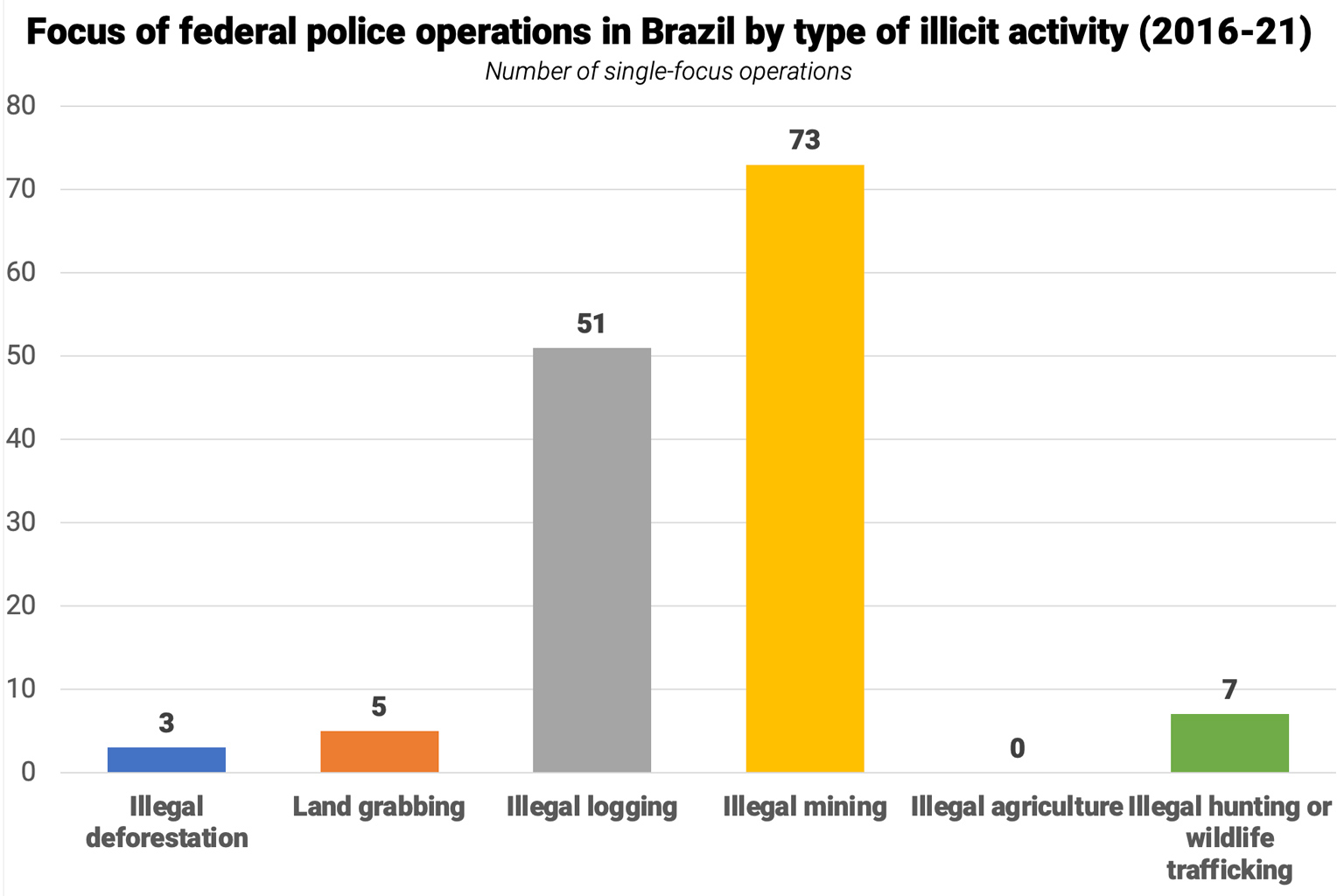 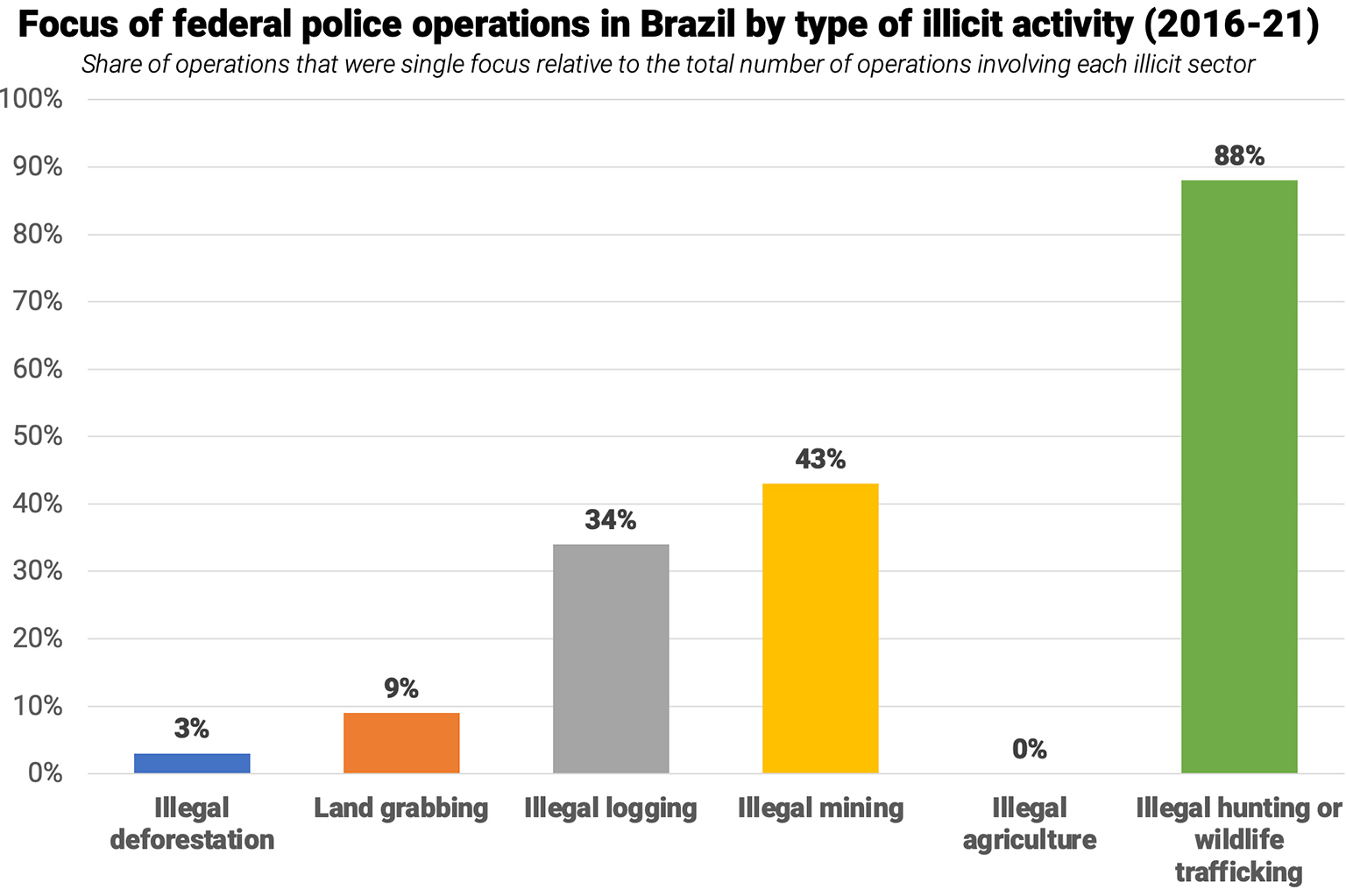 Igarapé’s research also draws attention to how webs of illicit interests – from drug trafficking to bootleg timber extraction – mingle and merge under the canopy. Such complex interactions point to the transnational dimensions of organized crime, raising tricky questions about cross border cooperation, which is still a work in progress.

Yet Amazon nations may have little choice but to make common cause against an existential threat. Bashing imperialists may make pulses race in Brasilia. Those with boots on the ground know that the credible threat to Brazilian sovereignty comes from a more familiar invasive species – an outlaw consortium with neither flag nor doctrine.

Taken together, they represent a remarkably resilient criminal ecosystem, practiced at exploiting legal loopholes, enforcement blindspots, and indulgences by officials willing to look the other way for a price. With every violation, the country’s vaunted “green patrimony” and its sovereignty are diminished.

If crime in the Amazon is an ever more organized threat, combating these illegalities has to be as well – in Brazil and beyond.

Laura Waisbich is a senior researcher for the Igarapé Institute. Melina Risso is the Institute’s program director. Ilona Szabo is the president of Igarape Institute. Igarapé researchers Terine Husek, Lycia Brasil  and Mac Margolis along with co-founder Robert Muggah also contributed to this piece.