Vietnam is a nation of nearly 100 million people, a long, skinny, tropical country stretched along the western side of the South China Sea. For a quarter-century, its economy has been growing at an average annual rate of more than 6%. Investment dollars pour in because multinational corporations have found that Vietnamese workers are very good at making products that the rest of the world wants to consume.

Since 2010, by World Bank criteria, Vietnam has been a “middle-income country.” Its leaders aim higher. Their goal for Vietnam, set at a Communist Party congress in January 2021, is to be a “high-income developed country” by 2045, with per capita income of $18,000 in current U.S. dollars.

That’s not likely unless Vietnam gets free of its dependence on coal to provide its electricity. The nation’s power grid is overtaxed and its energy sector is highly dependent on coal-fired power. In 2021, Vietnam produced 141 gigawatt-hours of electricity from coal. Worldwide, only eight other nations burned more coal.

Mongabay reported 18 months ago that Vietnam’s governing class had reached a consensus that reliance on coal is the principal brake on Vietnam’s quest for a permanently high quality of life. In parallel, civil society groups like Green Innovation and Development Centre (GreenID) had persuaded a large swath of ordinary citizens that only big changes in the energy policy could reverse palpably worsening environmental quality.

And yet, as recently as the second half of last year, power planners were still fighting a sharp break with the coal-centric policies of the recent past. The officials who populate the senior ranks of the Ministry of Industry and Trade (MOIT) and three big state enterprises — Vinacomin (coal), EVN (electricity) and PetroVietnam (oil and gas) — are protégés of people who trained in the USSR in the days of central planning. Thus it’s no surprise that many in the nation’s energy establishment are skeptical of new approaches and unfamiliar technologies.

In October 2021, MOIT presented to the prime minister’s office a redrafted power development plan that was sharply at odds with top-level guidance, the Politburo’s Resolution #55, issued 18 months earlier.

Typically, it has been the energy establishment that has decided what needs be done to meet projected demand. In the first decades after Vietnam was unified, there was heavy emphasis on hydropower, coal and, later, also on burning natural gas from offshore fields. In time, these were fully exploited. Attention turned for a while to nuclear power. PDP-7 (2010) envisioned the construction of up to a dozen nuclear power plants.

The energy establishment’s nuclear dreams didn’t last; they were shelved a few years later as prohibitively expensive, too long in gestation and, after Japan’s Fukushima disaster, highly unpopular with the Vietnamese public. Planners concluded that to meet surging demand, Vietnam had to double down on coal-fired power plants, many more of them, and as quickly as investors and financing could be arranged. A 2016 revision of PDP-7 forecast that coal’s contribution to national energy supply would rise from 35% in 2015 to 55% in 2025.

Vietnam’s bet on coal collided head-on with rising concern over the impacts of climate change. One by one, international development banks swore off financing coal plants; by 2020, only a few South Korean, Japanese and Chinese lenders would consider backing new ventures in Vietnam or anywhere else. Although in 2018, Vietnam had 32 gigawatts of further coal-fired generating capacity under construction or planned, most projects were falling well behind schedule and others would soon be cancelled. 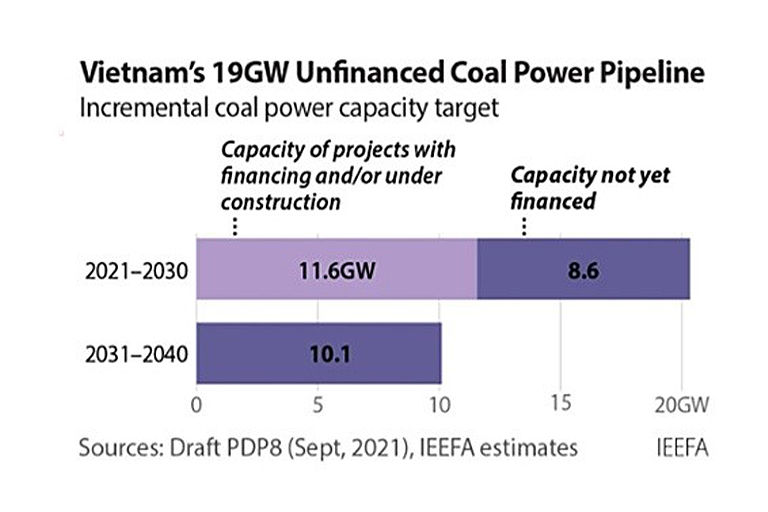 The nation’s energy establishment had run out of ideas and credibility. Although Vietnam is exceptionally blessed with solar radiation and steady onshore winds, neither MOIT nor EVN showed genuine interest in renewable power technologies. Instead they insisted that a power supply that fluctuated at Mother Nature’s whim would destabilize the national power grid.

It took an informal coalition of stakeholders — local officials, scientists, businesspeople, foreign experts and investors and like-minded civil society groups — to prompt the seismic shift in policy orientation that was signaled in February 2020 by Politburo Resolution 55. Mongabay reported later that year that PDP-8’s emphasis would be squarely on rapid deployment of solar and wind power, on using domestic and imported LNG to meet load-balancing needs, on building out the national transmission grid, and on marketizing energy supply and demand.

And yet, as noted above, by mid-2021 that commitment was in doubt. MOIT had seemed at first to accept the Politburo’s guidance, but now it was circulating a rather different draft of PDP-8. When GreenID obtained a copy, it was startled to find passages explaining why renewable power sources were, in the ministry’s view, unreliable and sure to destabilize Vietnam’s power grid. Projections for wind and especially solar power were therefore reduced. To make up the difference, the ministry had penciled in a doubling of coal-fired power capacity – to be achieved by finding investors for coal plant projects that were approved years ago but so far had failed to find financing.

None of this made it into Vietnam’s closely supervised national media. So GreenID took the initiative of posting the text of a letter from its executive director, Nguy Thi Khanh, to Prime Minister Pham Minh Chinh. If MOIT’s draft is implemented, Khanh warned, fossil energy would account for 68% of national electricity production by 2030, and “risk Vietnam’s isolation in the international community.”

Two weeks later, the prime minister traveled to Glasgow for COP26, where he made headlines by pledging unequivocally that Vietnam would achieve zero net emissions of CO₂ by 2050. A few days later, his minister of industry and trade, Nguyen Hong Dien, joined a 40-nation pledge to phase out coal use by 2040.

For Vietnam, the coal pledge amounts to a commitment to retire some 30 coal plants. Most will be nowhere near retirement age. More than 80% of Vietnam’s current coal plants were commissioned in the past 10 years. A few more are under construction. Others have yet to be built, though they are listed as having secured financing. The think tank Carbon Tracker calculated in mid-2021 that 99% of Vietnam’s new coal projects, ventures intended to add 23.4 gigawatts of new capacity, have a negative net present value when competed against clean energy alternatives. That makes it unlikely they will ever be built.

On Nov. 11, Deputy Prime Minister Le Van Thanh met at MOIT with senior staff. He told them in no uncertain terms to find technical solutions that conform to Vietnam’s COP26 pledges. And then, on Jan. 11, Prime Minister Chinh chaired the first meeting of a new whole-of-government group, the National Steering Committee to Fulfill Vietnam’s Commitments at COP26.

Meeting those COP26 commitments won’t be easy, but it can be done. In the next and perhaps final revision of PDP-8, there’s likely to be a lot of emphasis on tapping international development fund loans to extend and rebuild the national power grid. That’s essential so that grid managers can balance fluctuations in the supply of solar and wind energy. It would be considerably less expensive than commissioning more thermal power plants, says David Dapice, who’s been tracking Vietnam’s energy policy since the 1980s. Combining existing and projected solar and wind capacity with improved and cheaper battery storage would allow auction-priced solar and wind to be dispatchable and cost-competitive with coal. That is why investment plans should respond to new cost and technology developments.

Dapice says he’s also confident that Vietnam can bring down the energy intensity of its economic growth, which according to BP has been the world’s highest over the past decade. According to Dapice, there’s plenty of scope to save. Since 2010, primary energy consumption has been growing in Vietnam by nearly 10% annually – 3 to 4 percentage points faster than GDP. By adopting and adapting Chinese conservation techniques, he says, Vietnam would need a lot less new capacity in the decades ahead.

Before Prime Minister Chinh overruled MOIT’s Energy Department, it is likely that he made sure of continued backing by Vietnam’s Politburo. His interventions seem to have settled the direction of Vietnam’s power development. But the tug-of-war has come at a cost to the NGO community: Just a few months after publishing her letter outing the MOIT energy officials, GreenID’s leader was arrested. The charge against Nguy Thi Khanh is tax evasion. According to local sources, it’s alleged that when she was awarded the 2018 Goldman Prize, sometimes called the “Green Nobel,” Khanh failed to pay taxes before she deposited her $200,000 award in GreenID’s bank account.

GreenID has been, arguably, Vietnam’s most effective civil society group. Khanh’s detention closely followed the arrest of two other prominent clean energy campaigners, also on charges of tax fraud, and has sent a shudder through the nation’s NGO community.

Who ordered Khanh’s arrest and why? That’s still a mystery. Did Khanh offend the prime minister in the course of her public agitation for the decarbonization path he’s now endorsed? Probably not. More likely, she was been too bold and successful for the taste of Vietnam’s ruling party, a Leninist bunch who dislike competition for the attention of ordinary citizens.

Since 2008, David Brown, a retired U.S. diplomat, has written extensively on public policy issues in Vietnam. Brown welcomes serious inquiries about his articles for Mongabay. (Write to him here: [email protected]).