COLOMBO — To study the feeding patterns of frog-biting mosquitoes, scientist Priyanka de Silva of the University of Peradeniya in Sri Lanka had to identify both the mosquitoes and the frogs involved. Her team collected more than a thousand of the mosquitoes, which they could identify at leisure. But identifying the frogs proved a challenge due to the lack of an updated and simple field guide on Sri Lanka’s amphibians.

De Silva and other herpetologists, under a team led by Dilan Chathuranga, wanted to have a key to the identification of amphibians, so they pored through the relevant literature and mentioned their research requirement to Anslem de Silva, the elder statesman of Sri Lanka’s herpetology community.

Anslem de Silva, a former co-chair of the IUCN’s Amphibian Specialist Group, has to date produced at least 12 field guides on reptiles and amphibians. In compiling a new field guide with Chathuranga, he also invited Kanishka Ukuwela from Rajarata University to become part of the endeavor. After a lot of work, much of it amid the challenges of stringent COVID-19 lockdowns, the team produced their field guide: A photographic field guide to the amphibians of Sri Lanka, published by John Beaufoy Publishing.

Sri Lanka is a global amphibian hotspot; at the time of compiling the guide, there were a known 120 amphibian species on the island, of which 107 (90% of the total) are found nowhere else on Earth.

A book on Sri Lanka’s amphibians in English and titled The Amphibian Fauna of Sri Lanka was published 25 years ago by Sushil Dutta and Kelum Manamendra-Arachchi. An updated guide by Manamendra-Arachchi and Rohan Pethiyagoda followed, this time in the Sinhala language. However, at least 15 species new to science have been described since then, so a new book on amphibians was much needed.

The new guide keeps things simple with its use of photos. The species descriptions are arranged under their higher taxonomic groups — orders and families — and further grouped in their respective genera. Local and English names are also given. A short description of the species, identifying features and habitats are included, along with maps showing their home range.

The field guide contains color images of all the living amphibian species found in the Indian Ocean island, most of them photographed by de Silva and Ukuwela, with other experts contributing images where necessary.

“Photographing an amphibian with the correct posture to be used in identification is a challenging task,” Ukuwela told Mongabay. “Most of the frog species live in the moist forests and edges of streams flowing within forests. Sometimes, we must carry heavy camera equipment climbing frog hotspots like the Peak Wilderness, which is mountainous terrain. Frogs come out during the rain, so our fieldwork is mostly centered in the rainy season, so it is a struggle to protect equipment from moist and rain while clicking the right shots.”

For instance, there’s the archaeological discovery of a sixth-century bronze cast of a frog from an ancient irrigation site, which de Silva calls unique. This bronze cast was found inside a special “relic box” along with casts of a crab, fish, water snake, freshwater terrapin, and a statuette of Lakshmi, the Hindu goddess of fortune, indicating that certain ancient rituals based on prevailing belief systems considered these five aquatic animals as important to keeping the aquatic ecosystems clean, de Silva told Mongabay.

Ukuwela, who previously collaborated with de Silva in producing A naturalist’s guide to the reptiles of Sri Lanka, said the amphibian guide wasn’t so difficult due to having worked together before. And all collaborators have “significant domain expertise” when it comes to amphibians, Ukuwela pointed out.

Chathuranga, the third co-author of the new guide, was part of the frog-biting mosquito study group who had tried to come up with an easy method to identify the frogs he frequently encountered in the field. He also knew exactly what undergraduate students, researchers, wildlife managers and visitors were looking for in a field guide: accurate yet simplified information.

In recent decades, the world has lost 130 amphibian species, 18 of them from Sri Lanka alone. That makes it the highest concentration of amphibian extinctions recorded in a single country. Habitat loss, fragmentation, pollution, invasive species, and climate change are only some of the known factors driving the rapid decline of Sri Lanka’s amphibians.

“We wanted to use this field guide to generate interest in our vanishing amphibian population and encourage herpetologists in Sri Lanka to study them more, inspire further studies on the taxonomy, ecology, and conservation of these delightful creatures,” de Silva told Mongabay.

It’s especially important to get the younger generation interested in amphibians, he added. “Listen to the frog calls — not the traffic; see the beauty and what they do for us. Start frog ponds and you will definitely contribute some new findings of these animals to the world,” de Silva said.

Yet as new as the latest field guide is, the dynamic herpetology field in Sri Lanka means it could soon be out of date again. A 2021 study based on genetic investigations showed that eight frog species from the genus Pseudophilautus are synonymous with other species, thereby reducing the number of amphibians native to Sri Lanka. At the same time, the study also indicated that the genetic identities of 14 frogs showed marked differences, and proposed elevating them as new species, making for a net gain of six new species. Importantly, the paper also recommended further studies to deepen the knowledge of Sri Lanka’s amphibians.

These recent changes aren’t captured in the new field guide, which was compiled prior to the genetic study, and the guide’s authors make it a point to highlight that users should be mindful of the new information constantly coming out. 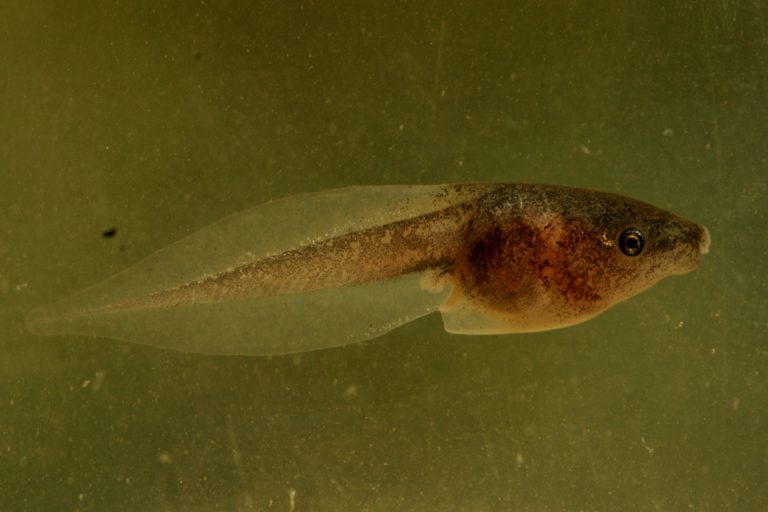 Frogs have an interesting life cycle, the longest portion of which is spent as a tadpole. Image courtesy of Kanishka Ukuwela.

Banner image of a gelatinous mass of frog eggs floating on the water’s surface, courtesy of Kanishka Ukuwela.