ABUJA, Nigeria — On Feb. 3, the Trinity Spirit, a floating production, storage and offloading vessel, caught fire off the coast of Nigeria. Seven of 10 crew members were killed. The government’s National Oil Spill Detection and Response Agency (NOSDRA) initially said no oil was spilled, but has since modified that to say that oil would not spread to the shore.

Nigeria’s environment minister, Sharon Ikeazor, said the vessel, known in industry parlance as an FPSO, was anchored in shallow waters at the Ukpokiti oil terminal, on the western edge of the Niger Delta, when there was an explosion on board. Videos posted on social media showed the ship partly submerged, with thick black smoke curling skyward.

The vessel is capable of storing up to 2 million barrels of oil, but is believed to have had between 50,000 and 60,000 barrels of crude on board at the time. Trinity Spirit’s owner, Nigeria’s Shebah Exploration and Production Company Ltd. (SEPCOL), said there were 10 crew members on board when the explosion occurred; three survivors were rescued and four bodies had been recovered by Feb. 16. 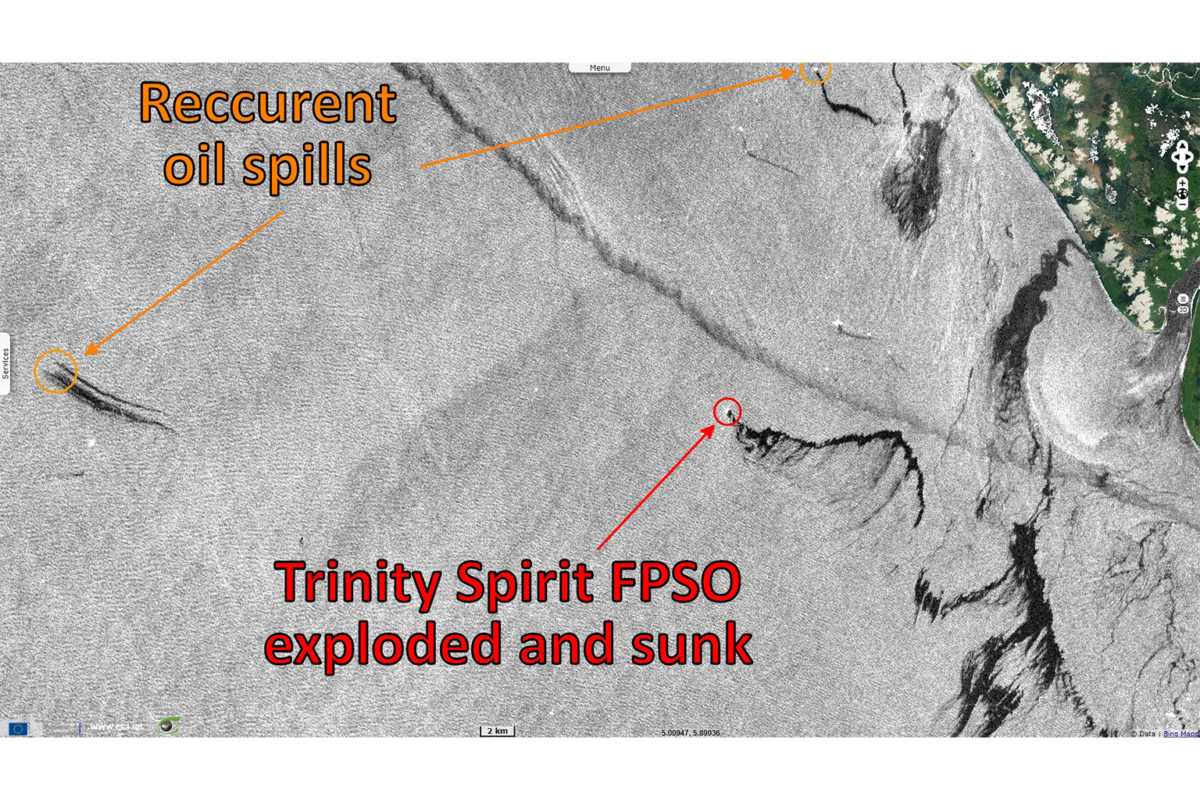 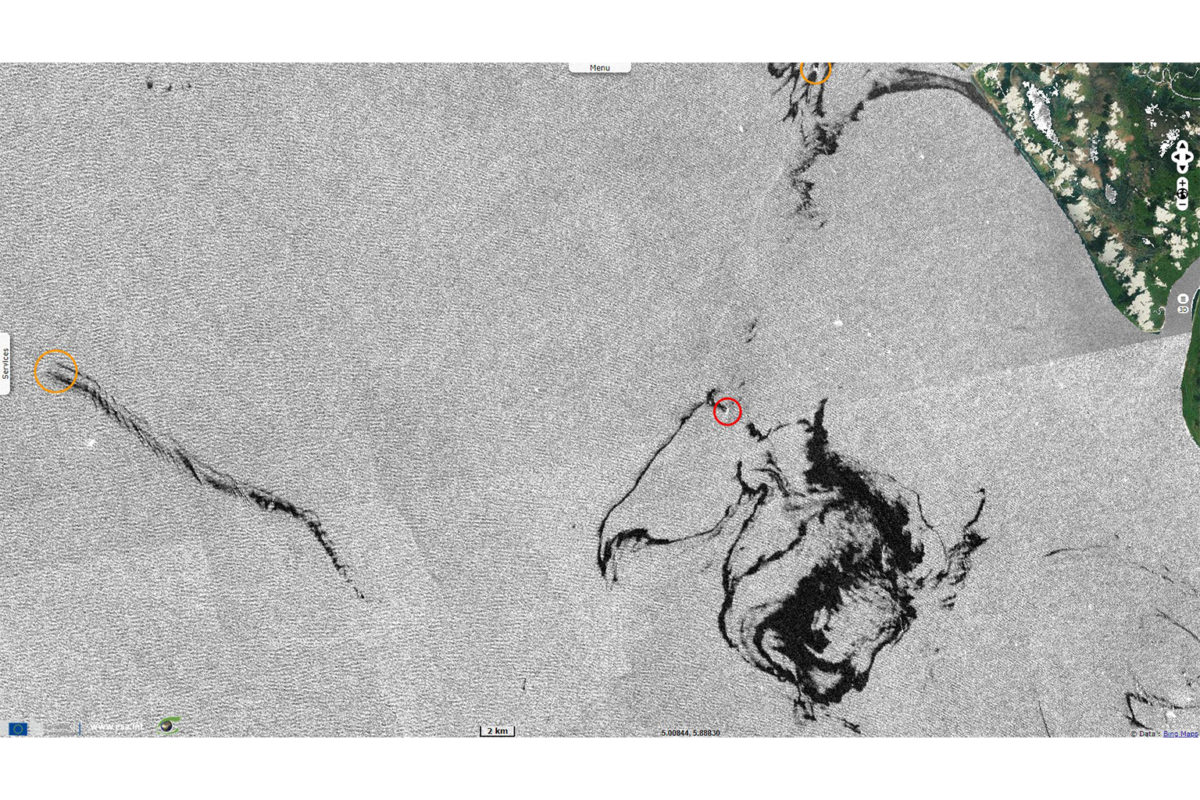 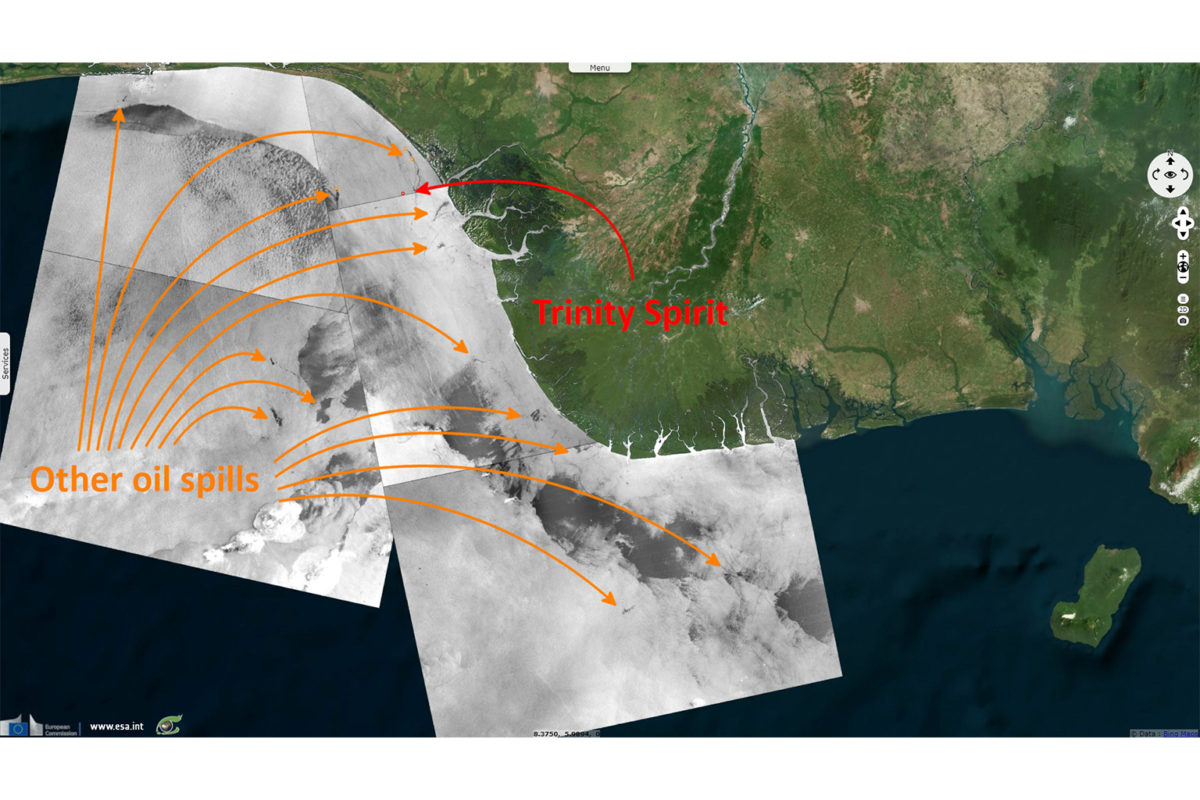 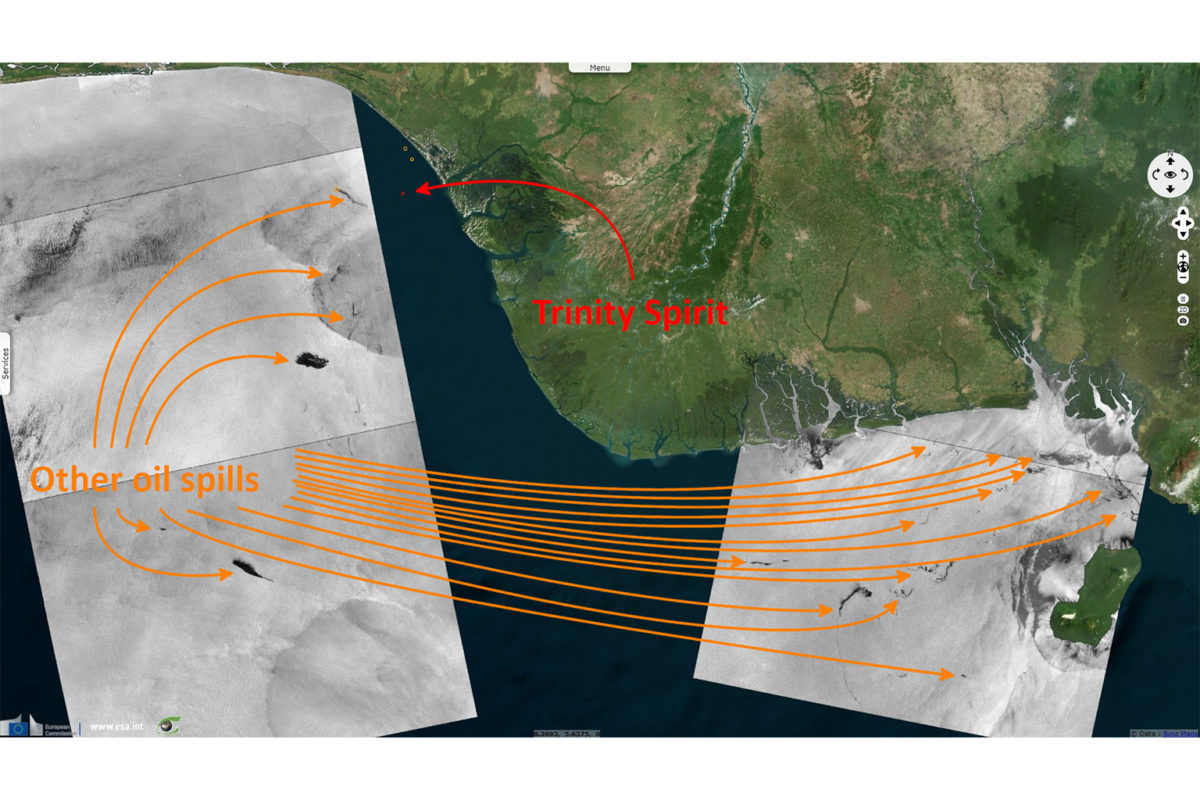 On Feb. 17, Idris Musa, director-general of NOSDRA, said officials have been monitoring the area around the ship since the explosion, applying dispersant to oil slicks. “They are not likely going to find any oil along the shoreline. We are still doing overflight till now to monitor from up,” he told media.

The explosion is the second major incident reported by Nigeria’s often volatile and poorly regulated oil industry in the past three months.

In December 2021, a blowout at a non-producing well owned by another Nigerian firm, Aiteo, went uncapped for more than a month, before the U.S.-based oil-well specialist Halliburton Boots & Coots was brought in to “kill the well” by injecting cement into it.

NOSDRA and Aiteo blamed that incident on sabotage by locals trying to steal crude oil. But the government of Bayelsa state, where the prolonged spill occurred, said it resulted from equipment failure and claimed it had caused significant harm to aquatic life. No formal assessment of either the causes of the spill or environmental damage that resulted has been released.

This points to an ongoing problem facing Nigeria, Africa’s largest oil producer. The country’s regulatory agencies rely on oil companies to report themselves. Government agencies responsible for monitoring and regulating the industry only investigative when an incident is reported, and investigating teams rely almost exclusively on the firms themselves to reach incident sites.

“Poor funding appears to have forced them to depend on the polluters and possibly distorts their assessment of situations,” said Nnimmo Bassey, an environmentalist and founder of Health of Mother Earth Foundation (HOMEF).

A study of satellite images in the Gulf of Guinea between 2002 and 2012 found more than 18,000 oil slicks, mostly caused by spills from offshore oil platforms and shipping. Nigeria was the most affected country in the region.

The Nigerian Maritime and Safety Administration Agency (NIMASA), responsible for monitoring Nigeria’s coastline, did not respond to a request for comment.

Environmentalists say the spate of accidents in Nigeria’s oil industry is only likely to continue. The oil industry has an appalling environmental record in Nigeria. According to the United Nations Development Programme (UNDP), more than 6,800 oil spills were recorded in the Niger Delta between 1976 and 2001. Some 3 million barrels of oil were spilled; less than 30% of that oil was recovered. The majority of the volume spilled was lost from offshore facilities.

This devastation occurred at a time when the country’s oil industry was dominated by oil majors including Shell, ExxonMobil and Total (now rebranded as TotalEnergies). These companies are now selling off their aging facilities to locally owned firms, many of which lack either the capacity or the capital to operate them safely.

“​The incidents raise serious concerns about the fate of the Niger Delta as the oil majors pack their bags and sell their decrepit facilities to Nigerian companies,” Bassey said. “More incidents will occur considering the wretched condition of the oil fields.”

According to Eric Omare, who runs the Niger Delta Good Governance and Environmental Initiative, people fishing at Escravos, some 30 kilometers (19 miles) east of the Ukpokiti terminal, have reported seeing oil slicks.

“What that means [is] there is an impact on the local community,” Omare said. “Generally, oil spills affect these communities. They build by the waterside so if there is oil spill there, you can’t bathe in the waterside, then your fishing gears are affected.”

He said the regulation of the sector is reactive in nature, when it should be proactive.

“For example, the law requires that oil pipelines should not stay beyond a certain number of years,” he said. “But there are some pipelines that were laid in the 1960s, they are still there, they have not been replaced. So when you have such facilities, it means it is a time bomb simply waiting to explode.”

Banner image: The wreckage of the Trinity Spirit, partially submerged in the Gulf of Guinea. Image © Anthony Obayomi / Greenpeace.