After reaching a historic low, the population of monarch butterflies overwintering in California has increased a hundredfold, according to the annual Western Monarch Thanksgiving Count. More than 247,000 butterflies were counted in 2021, up from 2,000 butterflies in 2020.

“We’re ecstatic with the results and hope this trend continues,” said Emma Pelton, the western monarch lead with  Xerces Society, the organization that manages the annual count.

Each year, volunteers and scientists count the orange-winged wonders in their overwintering locations, 283 sites this year. The highest number of monarchs (95,000) was reported from Santa Barbara County, including a single site on private property with 25,000 butterflies. Very few butterflies were seen in the San Francisco Bay area, with only 600 counted at overwintering sites from Mendocino to San Mateo counties.

Monarch butterflies (Danaus plexippus) have two populations, western and eastern. As winter descends, the larger, eastern population heads for the warm weather in Mexico, while the Western monarchs fly to central and southern California.

In their wintering grounds, butterflies go into a suspended state which allows them to live several months using very little energy. Those that survive the winter migrate north to lay their eggs and feed on milkweed. Up to four generations live and die each year before a new batch returns to their warm winter resting places where they gather on tree branches in heavy orange huddles.

Multiple generations, with complex life cycles and traveling long distances mean that any number of factors could have contributed to the dramatic increase in numbers. In an interview with NOVA, Louie Yang, an entomologist from the University of California, Davis, speculated that the population boom was caused by a “series of fortunate events.” Scientists offered a number of suggestions. The population boom may have been weather-related, causing an increase in the milkweed plants that the butterflies feed on and lay their eggs in. A reduction in agricultural activity during the COVID-19 pandemic may have resulted in less pesticide use (pesticides are notoriously bad for butterflies and other wild insects). Wildfires in California may have sparked an exceptional year for wildflowers, creating more food for the butterflies.

“Ultimately, all the experts interviewed for this article agreed that the answer is likely to be a mix of some or all of these mechanisms, since no one factor could produce such unprecedented growth,” Alissa Greenberg reported for NOVA. 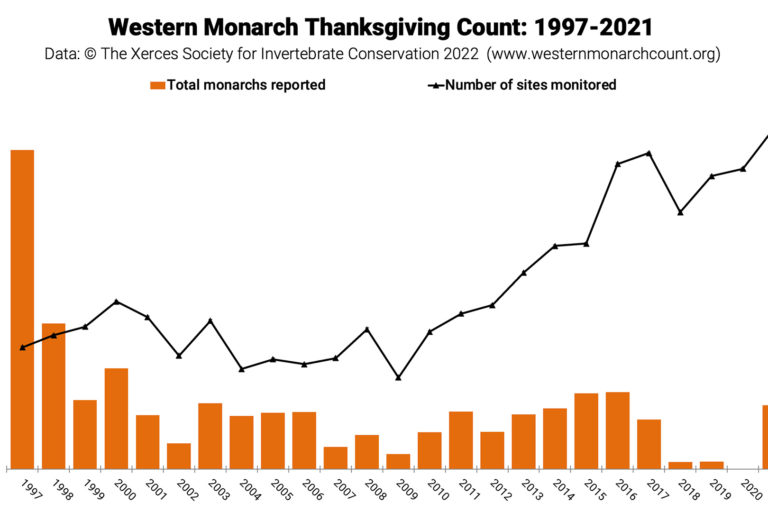 Although this year’s count is overwhelmingly positive, the population has still plummeted from historic numbers; more than 1.2 million butterflies were recorded in 1997. Scientists estimate the number of monarchs has decreased by 95% since the 1980s.

Monarchs meet the criteria to be listed under the U.S. Endangered Species Act, but the U.S. Fish and Wildlife Service (USFWS) announced in December 2020 that the species would not be listed, meaning it has no official protected status. While both the eastern and western monarchs are in decline, the eastern population still has an estimated 60 million butterflies. The western populations cannot be listed on their own at a federal level, leaving the western monarchs with limited avenues for protection.

“Now more than ever, we have an opportunity to double-down on our conservation efforts,” Isis Howard, endangered species conservation biologist for the Xerces Society, said in a press release. “Acting quickly to harness the momentum of this upswing is our best chance at preventing western monarchs and other at-risk butterflies from being lost forever.”

Efforts to preserve monarch habitat are underway. More than 45 transportation and energy companies, as well as dozens of private landowners, agreed in 2020 to create or maintain monarch butterfly habitat along “rights-of-way” corridors across the United States, and organizations such as the Xerces Society are fighting to protect the monarch wintering sites.

Pesticide- and herbicide‐intensive agriculture, urban sprawl, pollution, and climate change have contributed to the global decline of insects, including monarchs. One meta-analysis found that land-dwelling insect populations are decreasing by about 0.92% per year, which means that over the next 75 years, we could see 50% fewer insects.

Alongside a warning to humanity on insect extinctions in 2020, scientists offer suggestions to protect insects in the face of a global decline, including planting native plants, going organic and avoiding pesticides, and reducing your carbon footprint.

“Everyone has a role to play, whether that’s adding pollinator plants and avoiding pesticides in your home garden, or advocating for monarch-friendly policies within our neighborhoods, public lands, and plant nursery and agriculture providers,” said Xerces director Scott Hoffman Black. “Insects can be amazingly resilient if we give them a chance.”

Banner image of a monarch by Laurie Boyle via Flickr (CC BY-SA 2.0).

Liz Kimbrough is a staff writer for Mongabay. Find her on Twitter @lizkimbrough