Across Latin America, Mennonites seek out isolation at the expense of forests

by Victoria Schneider on 15 December 2021

Low German Old Colony Mennonites, who have been settling across Latin America for the past 100 years, have cleared 495 hectares (1,223 acres) of rainforest in the Peruvian Amazon so far this year.

The illegal deforestation documented by the Monitoring of the Andean Amazon Project (MAAP) is part of an ongoing expansion in the region by this conservative group associated with the Anabaptist-Mennonite tradition.

In a statement released on Dec. 13, the Peruvian Ministry of Environment (MINAM) announced that legal complaints have been filed and measures taken to “investigate, sanction and paralyze the irregular activities.”

“We have now documented the deforestation of nearly 4,000 hectares [9,800 acres] across four new colonies established in the Peruvian Amazon since 2017,” Matt Finer, the MAAP director at the NGO Amazon Conservation, wrote in an email to Mongabay. “This makes the Mennonites the new leading cause of organized, large-scale deforestation in Peru, more than other causes like agribusiness and oil palm.”

The new colony in Peru, which MAAP has found to be one of two most notable incidents of rapid deforestation in the Peruvian Amazon this year, was established after Peruvian prosecutors had launched an investigation in October 2020 into the unpermitted clearing of 2,500 hectares (6,200 acres) of forests by Mennonites.

The large-scale deforestation and recurring conflicts with Indigenous populations in Peru and other countries has resulted in public outcries by conservationists and local communities. But the Mennonites’ expansion throughout the region continues.

According to data collected by researchers from McGill University, Canada, there are a total of 214 Mennonite colonies occupying around 3.9 million hectares (9.6 million acres) in nine countries in Latin America, a combined area nearly the size of Switzerland. This figure excludes individual settlers, however, who are thought to cover another several hundred thousand hectares in Paraguay alone.

“They have the capital, they have the market, they have a growing population, they have the money to purchase and to buy goodwill from government officials,” David Kaimowitz, former director in the Forestry Division at FAO in Rome and now an independent consultant, told Mongabay. For Kaimowitz, the threat of the group continuing to move into sensitive forest landscapes is imminent as governments in the region prioritize agribusiness development over forest conservation.

“It seems like in the past you had racist governments looking for rapid development of areas they considered uncivilized,” Kaimowitz said. Blond, blue-eyed and visibly of European descent, Mennonites arrived with their own capital, a promising agricultural reputation that their production can meet national demands and generate exports while not causing any political problem. As a group, they’ve tended to look for the most isolated places where they can live according to their conservative religious beliefs.

This, according to Kaimowitz, is also one of the direct reasons why they deforest.

In Latin America, the group’s search for land “has almost always harmonized with major state level development plans that want to clear those forests for agricultural purposes,” said Ben Nobbs-Thiessen, chair of the Mennonite studies program at the University of Winnipeg in Canada. Canada has a large population of mostly progressive Mennonites and has become a center for the study of various aspects of Mennonite life.

Mennonite migration began several hundred years ago when they were persecuted and forced to flee. One group went from the Netherlands to Poland, then to Russia, and eventually to Canada and the United States. Traditionally, Low German Mennonites are known as hard-working and efficient farmers with a strong belief in the connection of faith and agriculture, which is why they were given land and granted the conditions they asked for, such as exemption from military service or national education, in many of the places where they settled.

The Mexican government was on a similar drive to expand and internally colonize. “They invited the Mennonites in as modernizers and agriculturally progressive people who would develop frontier landscapes,” Nobbs-Thiessen said.

Paraguay, Bolivia and other countries followed.

While the majority of the 2 million Mennonites living in diaspora around the world have urbanized and adapted to modern life, the group that migrated to Latin America in the 1920s was strictly against modernization and actively sought isolation based on its belief that agriculture in remote areas will bring them closer to god. “They were the horse and buggy men who spoke Plautdietsch [Low German],” Mennonite scholar Royden Loewen, who has written several books about Mennonites, said in an interview with Mongabay. Mennonite Low German originated in a dialect spoken by Dutch Mennonites who settled in Prussia in the 16th and 17th centuries.

Mennonites have a history of migration since they first dispersed across Europe. As soon as problems arise, the group has a track record of moving on to another country. Reasons include running out of land due to high birth rates; the refusal to modernize when governments change policies regarding the granted privileges, especially in education; or the occurrence of internal conflicts over the use of technology. According to Loewen, there are around 100,000 Mennonites in Latin America who still use steel wheels on their tractors instead of rubber (going back to a Mennonite law) and reject the use of telephones.

Their daily lifestyle is in stark contrast to their highly mechanized way of farming.

When Mennonites set out for a new country, they follow a century-old process of negotiation. A six-person all-male delegation travels to meet high-level government officials and “petition for a right to settle, brandishing their agricultural resumé,” Nobbs-Thiessen said. Often, though not always, they leave the closed-door conversations with the promise of new land.

While corruption has been raised as a concern, it has not been proven. “These communities are very closed, and people who are involved in these negotiations are very few and they don’t share,” Kaimowitz said.

Over decades, the Low German Mennonites have established a complex but highly functional transnational network stretching from Canada to the United States and all across Latin America. Communities, workers and land brokers move back and forth to buy equipment, educate themselves in things like crop maximization, or scout for new locations.

Some of the businesses that were set up in the colonies, like the ones in Paraguay where three Mennonite cooperatives have become major beef and leather exporters, were initially supported with credit from international finance bodies like the World Bank. The Mennonite Central Committee (MCC), a progressive body operating from the United States, has provided non-financial support for Mennonites coming directly from Russia.

But the diverse Mennonite diaspora has no central governing body, unlike other churches. “Colonies govern themselves,” Loewen said.

The funding comes mostly from within each colony. Migration is often financed through the sales of land or revenue generated from sales of agricultural produce. A system of pooling money and a traditional financial system called the waisenamt — a widow-and-orphan fund that manages money and has become a sort of bank — allow internal flows of money that enable the communities to move.

The provision of their own capital made the Low German Mennonites attractive to governments in Latin America. In return for development, the settlers were allowed to found colonies and farm in some of the world’s remotest landscapes with few restrictions regarding land use change.

“They are able to work really well with the system, and the system works with them, because there is money and corruption and other factors,” Edward Ellis, who runs the Tropical Research Center (CITRO) at the University of Veracruz in Mexico, told Mongabay in an interview.

Mennonites wanting to clear land for agricultural expansion consider fines a one-off payment that they can make up in the next crop. “It’s like a fee they pay and then they move on, that’s how they do it,” Ellis said, adding there’s always someone on the other side who accepts this, be it local governments, authorities, and landowners.

In Paraguay, where an investigation by the U.K. NGO Earthsight found a Mennonite cooperative, Chortitzer, responsible for large-scale forest clearing in the Gran Chaco, “they receive substantial support from the government,” said Earthsight researcher Rubens Carvalho. He attributed this relationship to the Mennonites’ dominance in the country’s beef and leather industries. 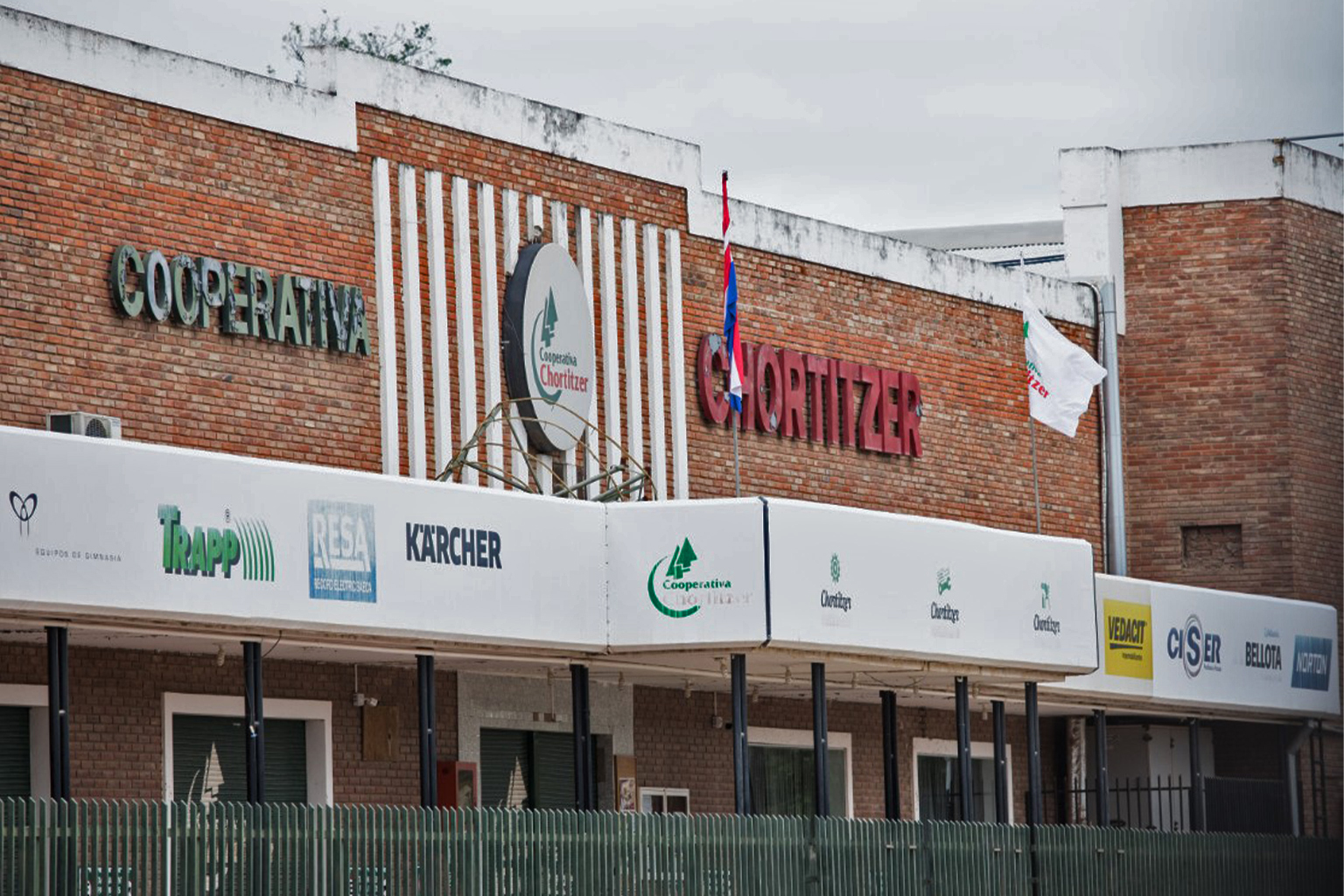 The offices of Mennonite agricultural cooperative and meatpacking giant Chortitzer, one of Paraguay’s biggest beef exporters. Image courtesy of Earthsight.“After the report was published, the government chose to support Chortitzer instead of investigating the exposed illegalities,” Carvalho added. Earlier this year, the Paraguayan government signed an agreement with the trade body Chortitzer is part of, “praising the members for being examples of sustainable development.”

Carvalho said the state had “neglect[ed] its duty to protect Indigenous rights and instead prioritize[d] agribusiness.” Even when irregular land titles, illegal forest clearing and corruption are exposed, few cases are acted upon.

In the past, complaints about Mennonite-led deforestation have sparked increased conflicts with local communities or resulted in sanctions. In Paraguay, Mexico, Peru and Colombia, authorities have launched investigations or issued fines.

However, the group keeps expanding. But for the most conservative factions, whose aim is to move as far away from cities and towns as possible, the changing times might just check their spread, Kaimowitz said: “Mennonites are running into increasing problems because that old world doesn’t exist anymore where they can live in isolation.”

Banner image: Aerial shot of the Chortitzer slaughterhouse in Paraguay. The firm supplies cow hides to tanneries who have in turn bene suppliers of Jaguar Land Rover. Image courtesy of Earthsight.