A simple internet search quickly shows the biggest exporters of soy, coffee, cattle or iron ore in Brazil. But there is a strange silence when it comes to gold: heads of institutions in the sector say they do not know the exporters; the Brazilian Federal Revenue Service and the Central Bank claim tax confidentiality.

The mystery surrounding gold exports has been broken by an exclusive Repórter Brasil investigation that sheds light on the largest exporter of gold from Brazilian wildcat mines, known as garimpos. It reveals that some of the gold exported by a company known as BP Trading, one of Brazil’s top exporters, may have been of illegal origin, often clandestinely extracted from Indigenous lands and protected forests in the Amazon, causing irreversible social and environmental damage.

BP Trading saw strong growth in recent years, with revenue of 1.4 billion reais ($350 million) in 2019, more than double its 2018 results. Its founders were investigated under the Operation Car Wash anti-corruption sweep. They are accused by the Federal Prosecution Service (MPF) of laundering money when they worked at Banco Paulista, a lender with close links to the trading company of the same initials.

When contacted, BP Trading said that it “maintains strict controls over the origin of the mineral purchased from its suppliers.”

An analysis of BP’s financial statements reveals that the company’s main suppliers include two so-called security distributors, or DTVMs — financial companies authorized to purchase gold — accused by the Federal Prosecution Service of trading illegal gold extracted in Pará state. The DTVMs in question are FD’Gold and Carol DTVM. 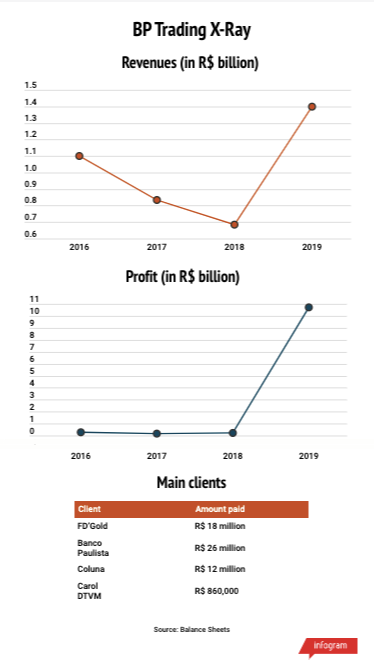 These two DTVMs, together with Ourominas, are the main buyers of illegal gold, accounting for more than 70% of all illegal or potentially illegal product, according to a recent study by the Federal University of Minas Gerais (UFMG) in collaboration with federal prosecutors. Of all the metal bought by these companies in 2019 and 2020 in Pará, at least 60% have an origin that cannot be proven, the study says.

Based on these conclusions, prosecutors filed a public civil action in August, asking for the activities of these DTVMs to be suspended and demanding $2 billion as compensation for socioenvironmental damages.

In addition to FD’Gold and Carol DTVM, a third supplier to the trading company is Coluna DTVM, which was targeted by the Federal Police for acquiring gold from illegal mining sites, as shown exclusively by Repórter Brasil in partnership with Amazônia Real. In an investigation published in June, we revealed how the gold that leaves the Yanomami Indigenous Territory is illegally purchased by middlemen and DTVMs, and may end up in large Brazilian jewelry stores, such as H.Stern.

Illegal gold extracted from clandestine mines or protected areas, a practice that is banned by Brazilian law, is “legalized” when DTVMs buy the product. Sellers fill out a paper invoice declaring the origin of that gold; fraudsters can claim that it came from a legal mine, even when that is not true. The problem is that the 2013 law regulating the purchase, sale and transport of gold in Brazil, states that gold sales are based on sellers’ good faith — thus exempting buyers from any responsibility.

BP Trading leads exports of gold from wildcat mines, but it is not the largest exporter in Brazil. Those are the big mining companies such as AngloGold Ashanti and Kinross, which operate throughout the entire supply chain, from extraction to export. BP Trading operates only in exports, purchasing gold from DTVMs, which, in turn, buy it from miners — both legal and illegal.

BP Trading accounted for about 10% of Brazil’s gold sales to foreign customers in the last two years, as uncovered by Repórter Brasil. Exports totaled 202.6 metric tons, worth about $8.6 billion, in 2019 and 2020. According to BP Trading, its main customers are in Canada and the U.K.

This supply chain of gold from wildcat mining poses a conundrum for the National Gold Association (Anoro), since the three DTVMs and BP Trading sit on its board and are active participants in its assemblies, according to new documents obtained by Repórter Brasil.

The report found at least two direct links between BP Trading and Anoro’s president, Dirceu Frederico Sobrinho, who began his own career in the industry as a wildcat miner and built strong connections with senior officials in the administration of President Jair Bolsonaro. Sobrinho also owns FD’Gold, which supplies gold to BP Trading, while another of his companies, Marsam Refinadora de Metais, refines it for the trader. Sobrinho and his daughter are partners in Marsam, which is also a member of the Anoro board.

“It’s important to pay attention to how concentrated the irregularities are. A few actors control them,” says UFMG researcher Raoni Rajão, responsible for the most recent and relevant study on illegality in the sector. “We are talking about a few actors controlling mining processes: only six mining site owners account for more than 60% of the gold without declared origin, while only three DTVMs buy more than 70% of that potentially illegal metal.” According to prosecutors’ public civil action, these three companies are Ourominas, FD’Gold and Carol DTVM.

A source connected to the sector who spoke on condition of anonymity explains how the market works: Demand for gold starts abroad, with international buyers placing orders with trading companies. These exporters turn to DTVMs, which buy the metal from miners. “BP finances the supply chain [in Brazil]. It deposits the money in advance on DTVMs’ bank accounts, which, in turn, have three days to settle transactions,” the source says.

Financial analysis of the balance sheets of FD’Gold, Carol DTVM and BP Trading shows how the latter’s results stand out: As illegal mines on Indigenous lands mushroom and violence increases in villages, sometimes with the involvement of organized crime groups, BP Trading has accumulated impressive results.

Another BP Trading client and supplier also stands out: Banco Paulista, which has been investigated under the Operation Car Wash probe for the past two years. In 2019, the bank traded 26 million reais ($6.5 million) in gold with BP Trading, according to the latter’s balance sheet.

BP Trading’s close relations with Banco Paulista are not limited to the bank being cited as its client and supplier in its 2019 balance sheet. BP Trading was founded in 2015 by Álvaro Augusto Vidigal, whose family created Banco Paulista and who has a long history in the financial sector, and by Tarcísio Rodrigues Joaquim, then the bank’s foreign exchange director. In May, prosecutors accused both of organized crime, money laundering and active corruption as a result of suspicious operations in the exchange department of Banco Paulista. The case has not yet gone to court.

In early 2019, the bank was targeted by Operation Car Wash, known in Brazil as Lava Jato. According to prosecutors, Banco Paulista laundered 48 million reais ($8.8 million) in funds deposited abroad and belonging to construction company Odebrecht. During a Federal Police operation, three directors of Banco Paulista were arrested, including Tarcísio Joaquim, but released a month later.

As a result of the investigations, fines and lawsuits, Vidigal and Tarcísio Joaquim left BP Trading in 2019, opening the way for Francisco Ferreira Junior and Ernesto José dos Santos to take charge of the company. Santos, the current director, was himself previously investigated for money laundering when he was a partner at Zera Promotora, suspected of being part of the scheme with Banco Paulista and Odebrecht. Despite investigations indicating that he may have received 17 million reais (around $4 million) in fake contracts, Santos was not charged by Paraná state prosecutors.

The downfall of Banco Paulista after Operation Car Wash saw several of the bank’s employees move to BP Trading, especially with the closure of the bank’s foreign exchange desk, thus strengthening the trader’s operations. The current president of BP Trading, Francisco Ferreira, used to hold a management position at the bank. At least six other former Banco Paulista employees currently work at BP Trading, including directors, supervisors and managers.

Vidigal, the former BP Trading partner, has businesses in a variety of sectors, including financial brokerage firms. He and Ferreira were partners with Anoro president Dirceu Sobrinho at refiner Marsam Refinadora de Metais. The partnership started in early 2020 and was dissolved in May this year.

Through his lawyers, Vidigal said he had decided to step down from Banco Paulista’s board of directors for personal reasons. On the charges filed by prosecutors, he denied any involvement in the crimes and said he is confident he will be acquitted.

Tarcísio Joaquim, also responding through lawyers, said he owned only 1% of BP Trading and has not been a partner since May 2019. He added he has never held any management or administrative position in the company. Ernesto Santos could not be located for comment.

In its response, BP Trading said the increase in the company’s profits is linked to “market factors” such as supply, price and scale. The company also called it “a necessary condition for its operations that the gold is accompanied by legally required documents.” BP Trading added that “Banco Paulista is just one of the banks in which it has a checking account.”

FD’Gold’s said that “it does not know the content of the lawsuit and the object of the charges [filed by prosecutors].” Carol DTVM said that it only buys gold from mining sites authorized by the National Mining Agency.

Ourominas said it has a “strict internal control system” to prevent buying illegal products and that it has not seen the details of the lawsuit. Read the full responses here.

Under the freedom of information act, Repórter Brasil sought to obtain a complete list of the largest gold exporters in Brazil as well as the main foreign buyers. However, the information was not forthcoming, with both the Federal Revenue Service and the Central Bank citing confidentiality. Organizations in the sector said they did not know, would not speak, or would not reveal names. Anoro did not respond to several attempts at contact.

“We don’t know those companies’ names, the destination of their exports, or their buyers. Everything is protected by confidentiality. In the end, we have no information about gold exports in Brazil,” said José Augusto, president of the Brazilian Foreign Trade Association, about the gold industry’s lack of transparency.

If DTVMs are sourcing gold from illegal mining sites, they are also contaminating exports with illegal product. The problem is that, under the current legislation regulating the sector, sellers are responsible for declaring the origin of the gold. That means illegal gold can be “laundered” before reaching DTVMs. That is a serious problem of product traceability, where the solution involves creating a new mechanism for the declaration of origin, such as electronic invoices, as advocated by some organizations in the sector.

“We are considering ways to tackle this problem, improve inspections, advance legislation and prevent this illegal gold from continuing to circulate and therefore from being exported,” says Flavio Ottoni Penido, president director of the Brazilian Mining Association. As long as nothing is done, traditional peoples living in the Amazon will continue to succumb to the destruction of their forests, the contamination of their rivers by mercury, and the division of their villages.

This article was originally published in Portuguese on the Repórter Brasil website on Oct. 21, 2021.

Banner image of illegal mine in Jamanxim National Park, state of Pará. Image by Felipe Werneck/Ibama.