Saving sea turtles in the ‘Anthropause’: Successes and challenges on the beach

Nesting figures increased in 2020, according to many turtle conservation organizations across the globe. Initially, conservationists ascribed this uptick to populations “thriving” because humans were in lockdown. But researchers and conservationists say the truth is more nuanced.

There were “huge challenges” across the conservation world, according to an IUCN report about the pandemic’s effect on protected areas in 90 countries. The unprecedented reduction in human activity during 2020 could shed light on otherwise impossible-to-measure human-wildlife interactions, according to scientists calling this window for crucial data collection the “Anthropause.”

But for some conservationists, dealing with new pandemic challenges in human-wildlife interactions is proving a struggle, including those working with sea turtles.

Turtles frequenting the Greek island of Zakynthos in 2020 found the relative peace and quiet appealing, according to a paper by scientists at Queen Mary University, U.K., and Deakin University, Australia. Loggerhead turtles (Caretta caretta) here usually share their nesting habitat with around 850,000 human visitors each summer.

Before the pandemic, researchers thought that turtles shifting to deeper water from nearshore shallows in late June were doing so to catch optimal water temperatures further from shore. But in 2020, as the pandemic reduced visitor numbers to just 25-50 people per kilometer, the turtles stayed in the nearshore shallows. The conclusion? Tourism pressure, not water temperature, was causing them to move away from the beaches during the peak of their nesting season.

Total nest numbers may be up by 8-15% or between 100 and 200 nests on Zakynthos’ beaches as a result, the paper estimates.

“In 2020 we hit the highest nestings ever,” Jeethvendra Krishnamoorthi, science officer with the Tropical Research and Conservation Centre’s (TRACC) turtle program, told Mongabay. Light pollution, which upsets nesting females and messes with turtle hatchling navigation, decreased so much here, Krishnamoorthi said, that the Milky Way became a welcome companion on his nightly turtle patrols around the deserted beaches of Pom Pom Island off the eastern coast of Malaysian Borneo.

Two resorts opened over the 2020 nesting season have closed, no longer casting light on the beach, and the one remaining resort has committed to turning off its lights at 9 p.m. The darker beach almost certainly means more success for both nesting females and hatchlings.

Krishnamoorthi and his team have seen a sharp increase in both critically endangered hawksbill (Eretmochelys imbricate) and green turtle (Chelonia mydas) nesting, not just in 2020, but in 2021 too.

“This year is looking good, we hope to surpass 200 total nests,” Krishnamoorthi said. Still, he said there may be more to it than the Anthropause. “I don’t think it’s directly because of the pandemic, but rather more on higher nest relocation commitments ever since 2019.”

TRACC set up a new turtle hatchery in 2019. The following year, the NGO became responsible for relocating all turtle nests on the island, because the only other hatchery closed after the pandemic halted local tourism. In this location, nests are especially susceptible to inundation by high tides and to egg poachers, so conservationists relocate all discovered nests to a hatchery for safekeeping.

Krishnamoorthi said having a single team of people proactively managing the new hatchery increased efficacy, meaning more nests were discovered and relocated. He said the notion that more turtles laid eggs due to the pandemic is unlikely, given turtles often migrate for several months to their nesting grounds, and lockdown began in Malaysia after they would already have been well on their way.

Marine life worth more dead to the hungry

“The negatives of the pandemic to the environment [here] are also great,” Krishnamoorthi said.

Some people who lost their jobs with the region’s many dive resorts due to the collapse in tourism have turned to fishing to survive. Spearfishing crews are now using the scuba equipment from their old jobs to access more fish. They come in boats from the mainland to outlying islands at night to catch fish to support their families, Krishnamoorthi said.

These fragile reef ecosystems were already under pressure from blast fishing, coral bleaching, climate change, and a population boom in coral-eating invasive starfish. The rise in fishers also presented a security risk for the few conservationists left at TRACC. They called on marine police to help secure the island from opportunists who might otherwise take a fancy to their outboard motors, “because people were desperate,” Krishnamoorthi said. “The marine police acknowledged our concerns and acted rightfully,” he added.

The main justification for limiting fishing in certain areas, especially tourism sites, is that marine life is worth more alive than dead. But in times of economic strife, fish are no longer more valuable alive to those who are hungry and lacking an income, Krishnamoorthi said.

The same trend of vanishing tourism, job losses and sudden poverty has exacted a devastating toll on the protection of Costa Rica’s four species of sea turtle, according to Didiher Chacón-Chaverri, executive director of the Latin American Sea Turtles (LAST) Association, an NGO.

“All that we won in decades of conservation, we lost in 2020 in some beaches,” he said.

Sea turtle nesting sites draw tourists, and tourists create jobs. The pandemic sucked the life out of tourism, leaving people desperate. Unemployed and hungry, more people turned to turtles and their eggs as a lifeline for food or cash.

While LAST recorded high nesting numbers in 2020, the poaching of both egg and adult turtles increased threefold due to rising poverty, Chacón-Chaverri said. LAST volunteers, on whom the organization relies, were unable to access the project because of pandemic travel restrictions. Funding dried up, leaving LAST with limited resources to protect nesting beaches. On top of this, local law enforcement found itself at capacity dealing with human aspects of the pandemic, leaving Chacón-Chaverri’s remaining skeleton crew without backup.

The warmth, happiness and positive energy of patrolling for nesting females every night during pre-pandemic nesting seasons was replaced with uncertainty and fear.

“For sure poachers will fight for any nest or any turtle,” Chacón-Chaverri said. Environmentalists have been murdered and sexually assaulted in the past for defending turtle nests in Costa Rica.

Increased efforts to negotiate with poachers to spare some nests and release some female turtles were met with limited success. Put simply, Chacón-Chaverri said, LAST just does not have the bandwidth to adequately protect the area’s sea turtles. 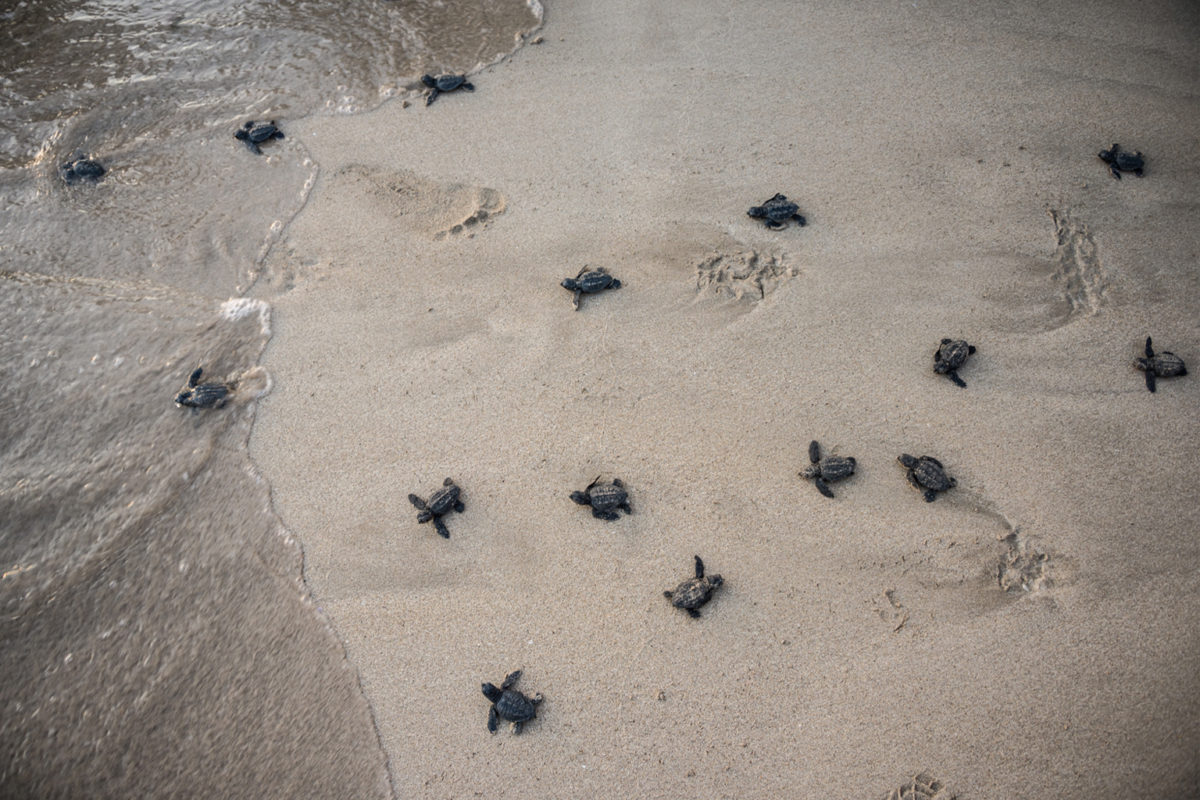 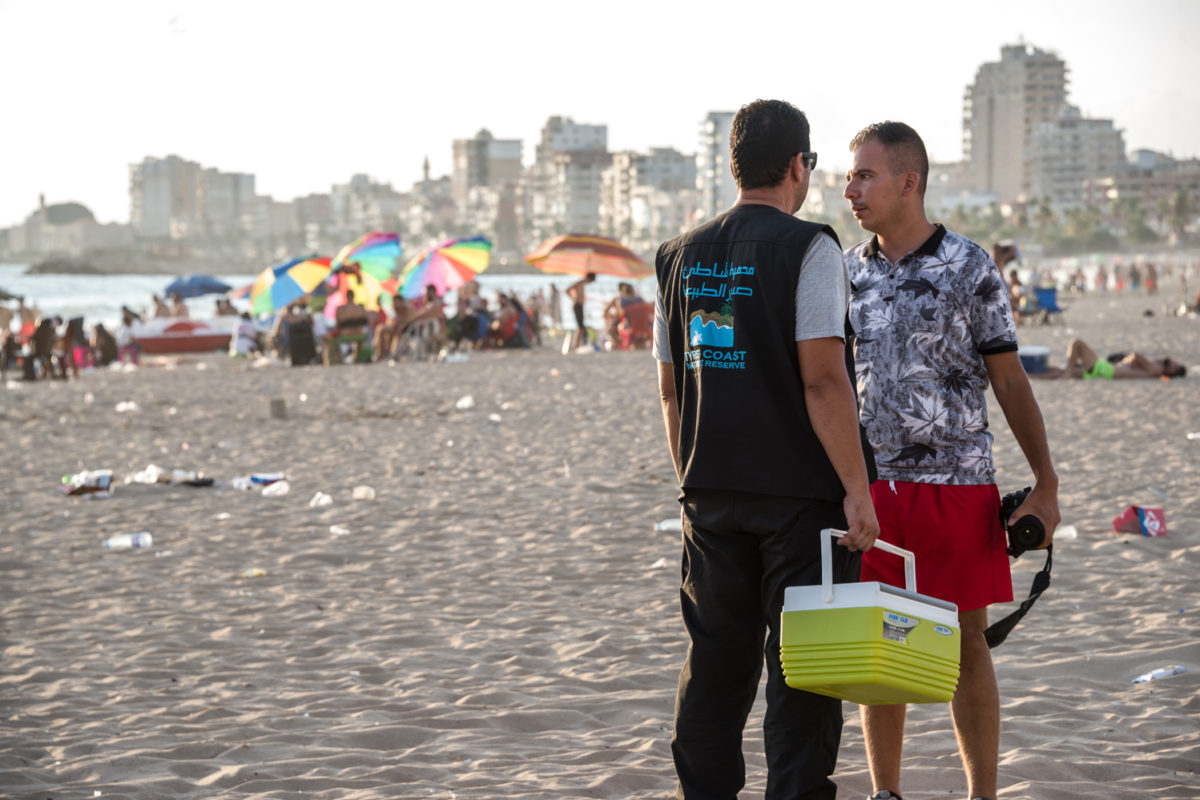 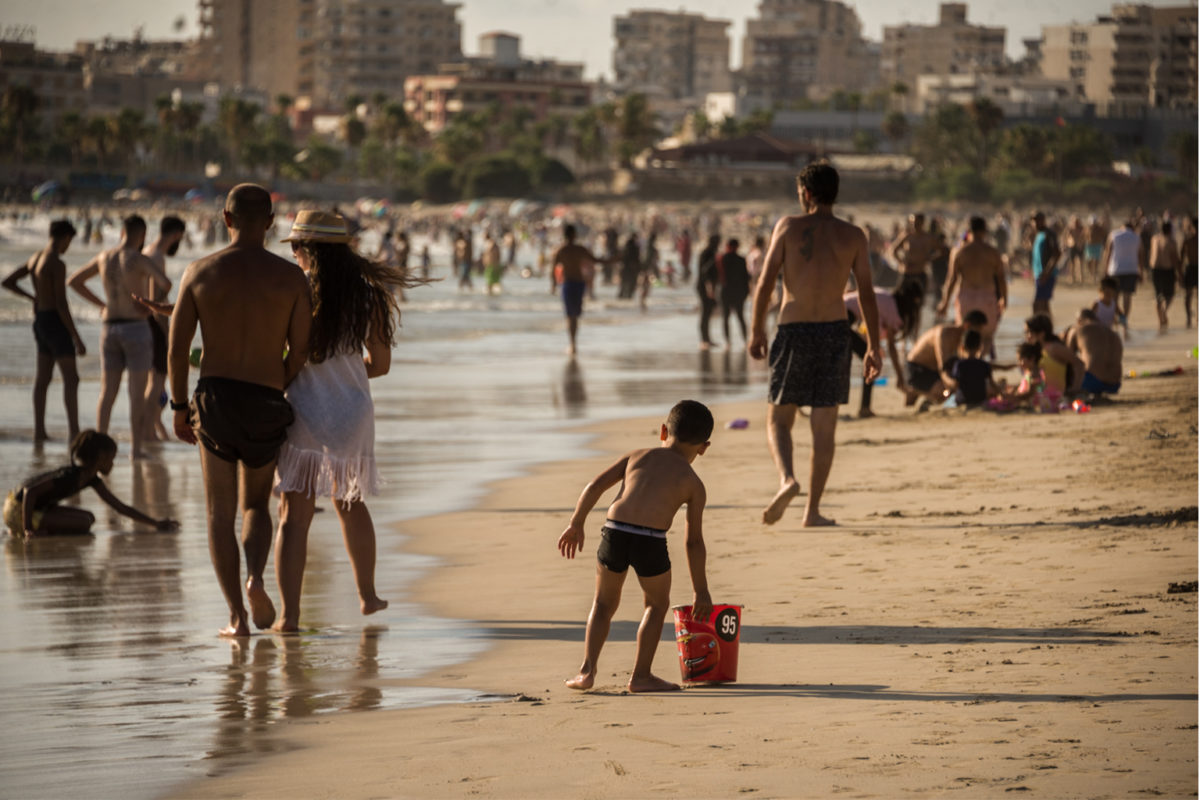 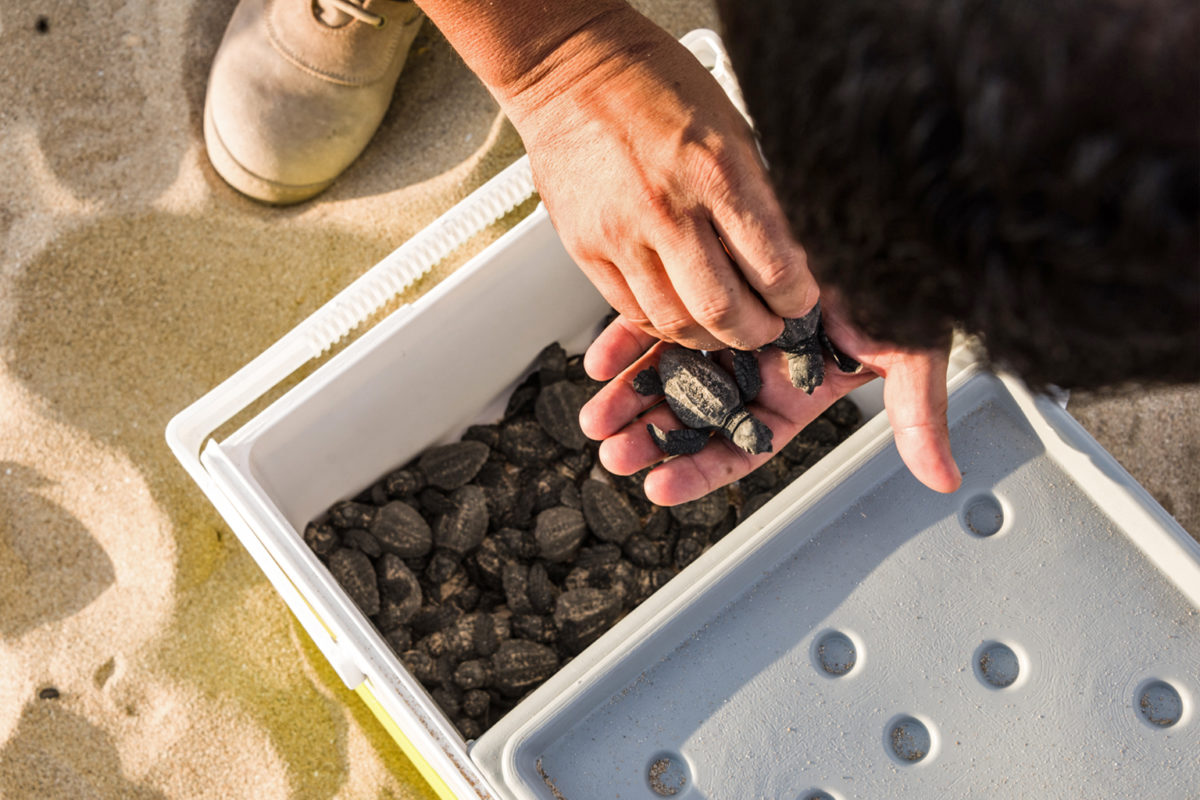 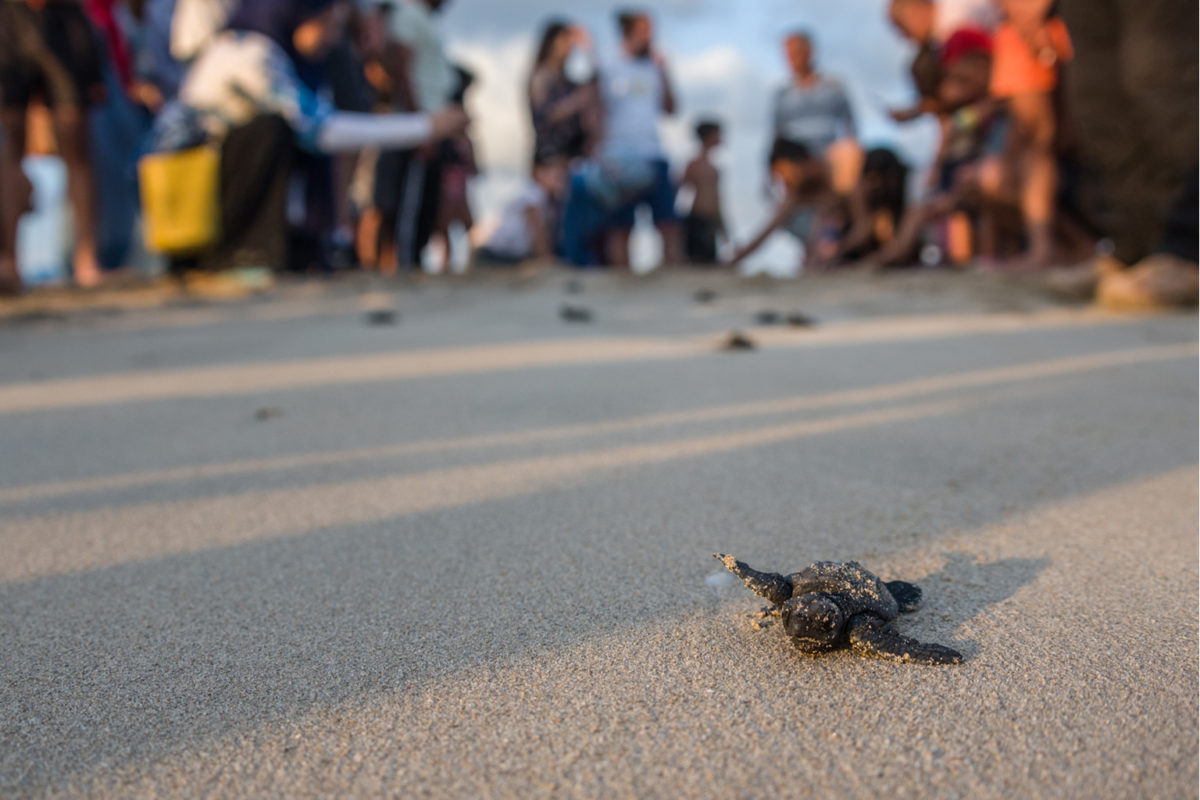 A different narrative has played out for Lebanon’s turtle conservationists over the Anthropause.

The tiny, Middle Eastern country is going through one of the worst financial crises since the 1850s, according to the World Bank. The Lebanese lira has lost more than 90% of its value, and a crippling fuel crisis is adding to the misery and desperation as people struggle through the heat of summer without electricity. Decades of government corruption and mismanagement caused Lebanon’s collapse; the pandemic was just the icing on the cake.

Still, turtles and their eggs are not being poached here despite widespread human hardship.

Marine biologist and turtle conservation program leader Ali Badreddine spent Lebanon’s 2020 full lockdown traveling up and down the coastline recording sea turtle nesting. He often slept on the beach due to a movement control order allowing even/odd license plate numbers on the road only on alternate days. His efforts were worth it: Badreddine uncovered an apparently bumper 2020 nesting performance, with more than twice the number of loggerhead and green turtle nests recorded in 2019.

“People stayed at home and fishermen didn’t go out, so the turtles were free,” Badreddine told Mongabay.

But now people have returned to the beaches and fishing has resumed, he told Mongabay, gesturing down the thronged expanse of the public beach in the city of Tyre, where he is about to lead a loggerhead turtle hatchling release. Despite this, the 2021 nesting season is still on track to knock previous years out of the park. Numbers are up almost 50% on last year’s record-breaking nest figures. Badreddine, like Krishnamoorthi, mostly attributes the increase in recorded nests down to awareness rather than the pandemic.

Badreddine has been working hard to educate more Lebanese about the importance of loggerhead and green turtles, both threatened species, since 2018. He began with people in communities close to known nesting beaches, gradually expanding the reach of his campaign during the Anthropause with the help of social media plus expertise and funding from the Regional Activity Centre for Specially Protected Areas (RAC/SPA), the U.N., and the Lebanese Environment Ministry.

Over the 21 years that scientists have been monitoring sea turtles in Lebanon, it was thought that there were only three important nesting sites. But Badreddine’s work with RAC/SPA and the U.N. has recently confirmed a total of seven important sites, three moderate sites, and up to 12 sites with between 10 and 50 nests per year stretching along the entire Lebanese coast. Monitoring these with the help of locals has increased reporting of nesting events, according to Badreddine, allowing better understanding of Lebanon’s turtles and informing conservation policy.

Change of heart for fishermen

Changing the way Lebanese fishermen perceive turtles is one of Badreddine’s biggest successes.

“Now when they accidentally catch a marine turtle in their net or something like that, they call us, they cooperate with us, they ask what do they have to do,” he said, adding this happens three to four times a week.

Some fishermen would previously kill turtles. They believed them to compete for fish and worried that entangled flippers would rip expensive imported nets, Halim Mahboub, a hobby fisherman of 45 years, told Mongabay.

“They have understood the importance of biodiversity and that turtles eat the jellyfish,” he said, putting this down to “awareness on social media and Dr. Ali’s work.”

“Humans are part of this system” Badreddine told Mongabay. “If the turtles die out, the jellyfish will increase, larval fish will go down and there will be no fish for people.”

Sea turtles are keystone species. They create a cascade effect through their eating habits that ripples out through the ecosystem, keeping it more balanced, he said.

Still, Badreddine’s job has been hit hard by Lebanon’s financial crisis. Currency depreciation, price hikes, and three-hour queues at gas stations due to a fuel crisis make traveling to nesting beaches difficult and expensive. He still sleeps on the beach, but now “I sleep here because I don’t have gas to go back home.” Undaunted, he said he will continue his work.

“All this crisis, and the turtles still come and nest, so there is some happiness, some hope,” he said. “There are still good things about Lebanon.”

For Liza Boura, programs officer at the Greece-based NGO Mediterranean Association to Save the Sea Turtles (MEDASSET), the pandemic was a lost opportunity for sea turtles.

“Even if human presence was reduced, [construction] development of nesting beaches continued, as did lack of management and enforcement,” she said.

Given that sea turtles are long lived, “the impacts of the pandemic on nesting can only really be assessed in the long term,” Boura said. It will take around 15-30 years before we’ll be able to see whether there’s an increase in newly mature adults returning to mate and lay eggs for the first time.

But the impacts of the pandemic on conservationists can be felt now. Boura said she’s frustrated by the number of delayed conservation projects, reduced donations, and curtailed opportunities for “hands-on practical exchanges” between conservation groups across the planet.

Whether quieter beaches will counter the negative impact of the extra challenges faced by sea turtles and those protecting them remains in question. But given the life span of sea turtles, experts say it is unlikely that such a short Anthropause will make much long-term difference.

Banner image: Tyre, Lebanon, July 2021. 85 Loggerhead turtle hatchlings arrive at the beach in a picnic box, ready to be released to the sea. Image courtesy of Elizabeth Fitt.