Mycoremediation brings the fungi to waste disposal and ecosystem restoration

We see disposable masks everywhere these days. Littered on the street and sidewalks, hanging out of garbage cans, floating through the neighborhood on a windy day. Unfortunately, the ubiquitous face coverings aren’t the easiest to dispose of or recycle, but what if they could sprout a mushroom? For Joanne Rodriguez, this is a far better use of a mask after it’s provided its humanly function.

“The masks? The mycelium loved it. They were fully grown out in two weeks,” she said. Rodriguez is the CEO of Illinois-based Mycocycle, a new company rethinking how fungi can clean up waste streams.

The oft-used adage of “mushrooms can save the world” takes on a new meaning when applied to the flourishing realm of mycoremediation, the idea of harnessing fungi to break down toxins or waste.

Recent studies, and new projects in the past few years, have cast new light on an old (a very old) natural process, with innovations and research continuing to bring more people into the work of drafting the humble fungi in the fight to clean up the world.

Mycoremediation, particularly through the use of native fungi, is one of many tools for community restoration projects aimed at regenerating areas hit hard by human-made hazards, where erosion, decay, disaster, pollution or mismanagement have caused the ecosystems to falter.

There are a dizzying variety of ways fungi can be used to break down things. They can colonize and regenerate soils, plants, forest floors and, ambitiously, entire swaths of devastated habitat. And it starts, like so many good things, at the roots.

The fungi root system is called mycelium. These are underground web-like white threads called hyphae connected to each other throughout soils and other moisture-rich environments like rotting tree trunks, in order to find nutrients. Mycelium is one of nature’s most resilient living organisms. It’s both water-retardant and fire-resistant, making it a perfect intermediary for environmental recovery and disaster prevention.

At its vegetative heart, mycoremediation is about rendering fungi’s natural abilities as decomposers and breaker-down-of-things to restore ecosystems. Scientists can train certain species of fungi in a lab to digest waste like polypropylene face masks, plastic gloves, and sheet metal, and companies such as Mycocycle are experimenting with bioreactors where fungi can break down materials in a controlled environment. Most of the experimental process of breakdown happens before the mushroom, or fruiting body, is formed: the toxin or waste is fully digested or absorbed by the fungus, typically in a few weeks, but sometimes, left long enough, it will sprout a shroom.

On a larger scale, fungi can be employed to regenerate natural habitat after environmental disasters such as offshore oil spills and wildfires.

Leila Darwish, the author of Earth Repair, a book about how to incorporate bioremediation into community projects around the globe, saw firsthand the destruction caused by oil spills and tar sands while growing up in Alberta, Canada. She was disillusioned when no one took responsibility for the devastation, let alone any action to clean it up.

“I wanted information to be accessible and available to people on the front lines of environmental destruction,” she told Mongabay about her reasons for writing the book.

Darwish described how mycoremediation is finally getting more attention because results from initial studies look promising, such as a forthcoming project by the Skeena Watershed Conservation Coalition.

This coalition is working with a local mushroom farm called Aurora Sporealis in northwest British Columbia, where fungi will be used to break down creosote-soaked railway ties left in piles around the Skeena watershed. Creosote is generally made with coal tar, and often infused with pesticides to keep termites and other insects from eating the wood. The project started in April 2021, and the coalition is currently working at identifying which mushroom species will be best suited for breaking down creosote: elm oyster mushroom (Hypsizygus ulmarius), turkey tail fungus (Trametes versicolor), artist conk (Ganoderma applanatum), or chicken of the woods fungi (Laetiporus sulphureus), among others. And Darwish said they are also looking into a wild oyster fungus that grows in the area.

“It is always better and ecologically safer to use native mushroom species when doing any kind of restoration work out on the land,” she said.

Another project Darwish mentioned, called the Post-Fire Biofiltration Initiative in California, is strategically placing fungi-packed wattles into contaminated waterways. Wattles are basically a stuffed sack-like vessel full of straw, a favorite growing environment for certain species like oyster mushrooms. This mycofiltration is used to intercept, filter out, and break down a variety of chemicals in the water. Many stem from agricultural uses, such as E. coli, nitrogen, and phosphorous. Wattles can also catch and retain heavy metals.

Darwish said oyster mushrooms are a good species to start with when considering mycoremediation because they are robust, available, voracious, and flexible — their appetites for different things can be steered.

“Humility and an attention to detail are needed,” Darwish said about working with fungi. “We don’t know if our mycoremediation projects are always going to work right away, but we need to get out into the field, test them, and improve them.”

Fungi may even be able to restore habitat destroyed by wildfire, a vital possibility in an age of climate change.

Wildfires, such as the currently burning Dixie Fire in California, the second-largest in the state’s history, are burning much hotter and are much more extreme due to climate change. The latest report from the Intergovernmental Panel on Climate Change (IPCC) shows these kinds of fires are more likely to occur due to drying conditions and continuing droughts. To rehabilitate areas affected by fires, mycoremediation experts are plotting ways in which fungi may gain a foothold, with the goal to increase the area of fire-adapted wild lands.

CoRenewal, an international organization working with universities and wildfire survivor communities, is currently testing different fungal species on 27 burn scars — a barren and charred strip of land annihilated by fire — on some of the largest fires California endured last year, including from the CZU Lightning Complex, the Oak Fire, the Glass Fire, and the LNU Lightning Complex fires.

Mia Rose Maltz, co-founder of CoRenewal, said that because the wildfires burned so hot, they pasteurized the soil, leading host plants to die off. It’s now up to mushrooms to bring back life from the dead.

“They are the grand recyclers,” Maltz said, “The engines of the regeneration system.”

Data collected from working in the wildfire areas is still coming back to the researchers, Maltz said, but CoRenewal is hoping to understand how fungal networks may work to heal areas from wildfire burns in comparison to prescribed burns.

CoRenewal, which is also one of the lead organizers for the Post-Fire Biofiltration Initiative, wants to improve the ecosystem’s rate of recovery, making forests more resilient to future fires, supported by a healthy fungal baseline that will keep moisture in the forest floor, act as a fire break, and regenerate carbon-rich soil — a necessity for robust plant life.

But any long-term restoration project isn’t without setbacks. Some of the issues facing mycoremediation projects include the amount of water needed and the costs of testing.

In drought-prone areas, such as the wildfire lands in California, it can be tricky to find the right fungi that will thrive in different gradients and moisture levels. Meanwhile, testing can be pricey, according to Maltz and Darwish, but it’s required to figure out which fungi species will work for a certain environment.

Darwish said the solution might be universities offering cheaper testing in partnership with community organizations. Rapid grants from the government, foundations and philanthropic organizations for time-sensitive projects, like those right after wildfires, would also be valuable.

Innovations in the field

Joanne Rodriguez of Mycocycle is one of the people pushing for more fungi projects. Mycocycle uses fungi to neutralize toxins in landfill waste streams. The fungi (Mycocycle has been working with white-rot fungi recently) absorb and digest waste and regenerate the remaining materials into byproduct that can be reused.

Some of the bio-based byproducts could be used in compost, while other materials, Rodriguez said, can be converted into a matrix of building materials, such as composite installation or flooring.

“It’s symbiotic with nature,” Rodriguez said about fungi. “It takes what it needs, and gives back.”

Extreme weather has caused waste to pile up like never before. In the southeastern U.S., Rodriguez said, hurricanes lead to huge masses of waste in a short period of time. And currently, the “dig and dump” method of landfill disposal is neither eco-friendly, carbon neutral, nor cheap. 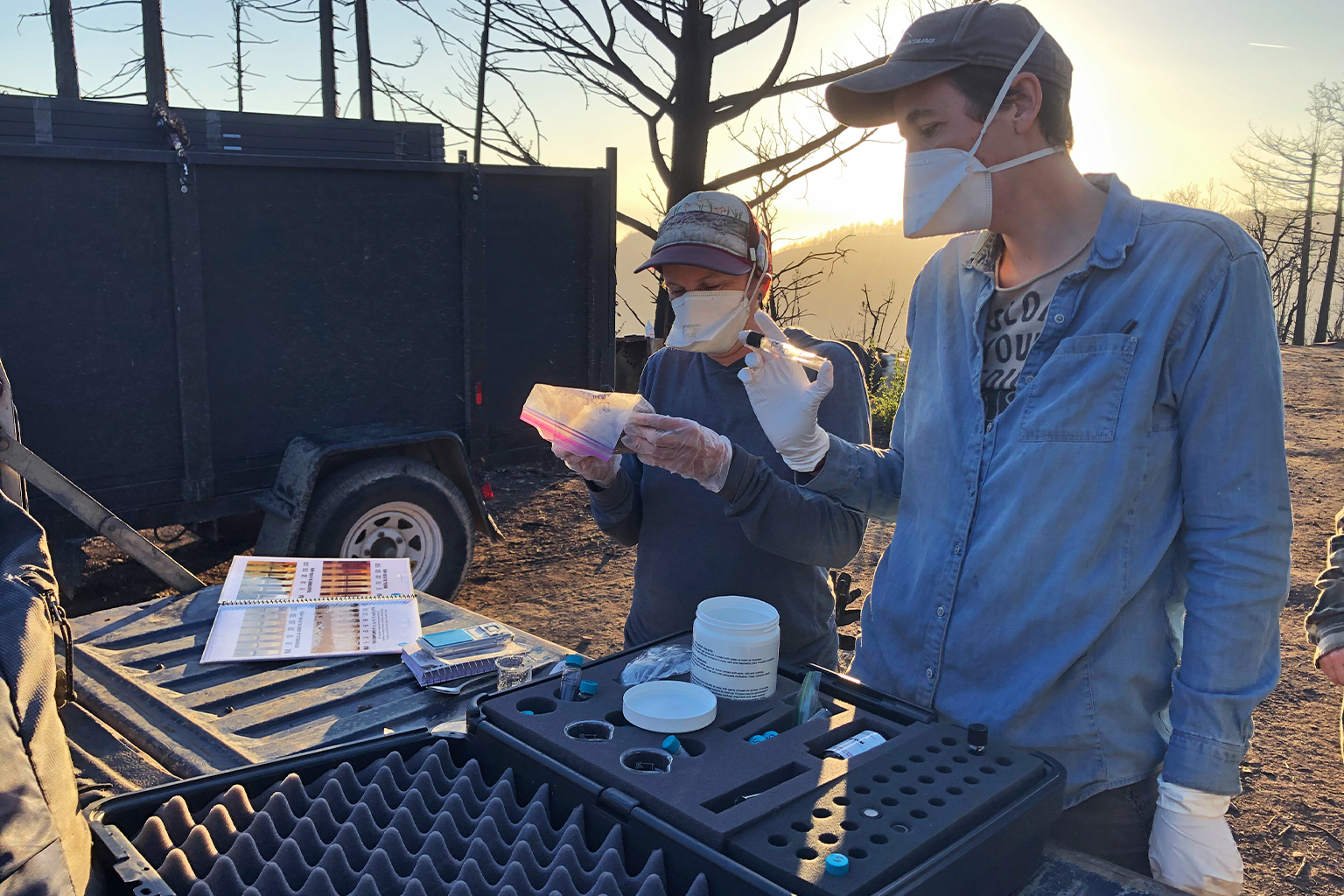 It costs approximately $40 to $72 a ton, depending on the region, to dispose of waste into a U.S. landfill. To dispose of waste using fungi in a liquid-fermentation process, the way Rodriguez envisions, would currently cost around $63 a ton. Rodriguez also has her sights set on outfitting dumpsters to become good fungi-growing spaces, and inoculating toxic stuff with species trained to break down specific chemicals and heavy metals found in construction dust.

“It’s an engineering issue that needs to be overcome,” she said.

Rodriguez said she hopes Mycocycle will be fully up and running by next summer, with an ambitious goal to convert 1.5 million tons of waste into renewable natural materials in the next five years.

“If we do it once right, that’s a big deal,” she said about working on Mycocycle’s first projects. “Once we do it that way, it just goes from there. The horse is out of the barn.”

“We don’t need people just thinking ‘mushrooms save the world,’” Darwish said. “We need to figure out what will work and apply it to situations that will help. We need more people trained properly, and more on the ground, earnestly trying it.”

Banner image of red cup mushroom by Rhett A. Butler/Mongabay.