An environmental ‘catastrophe’ in Southern Africa lingers with few answers

What happens when an environmental catastrophe takes place in an isolated area at the periphery of the world’s attention? The last six weeks in the Democratic Republic of Congo and Angola suggest the answer is: not very much.

In early August, reports began to surface that the waters of the Tshikapa and Kasai rivers had turned a brownish-red. Dead fish were floating to the surface and washing up on riverbanks. Thousands of people fell ill with bouts of diarrhea after drinking the water, and local officials reported that hippos and other large animals were turning up dead.

It was, in the words of researchers from the University of Kinshasa, an “unprecedented environmental and human disaster.” The university’s Congo Basin Water Resources Research Center (CRREBaC) said the pollution was likely caused by discharge from industrial diamond mines in Lunda Norte and Lunda Sul provinces in northern Angola, where provincial authorities reported similar signs of a spill, including mass fish deaths and discolored water. In a press conference on Sept. 2, the DRC’s minister of environment and sustainable development, Eve Bazaiba, said that at least 12 people had died and thousands more had been sickened.

More than six weeks later, there are still few definitive answers for what caused the pollution, who is responsible, and what the long-term impacts for communities and ecosystems affected by it will be. Raphaël Tshimanga, a scientist with CRREBaC, says he’s baffled by the lack of international attention and slow regional response so far.

“It’s actually a serious catastrophe,” he told Mongabay. “The river was red for more than a month, and this is a big river, at places its width is more than a kilometer.”

According to satellite data analyzed by VisioTerra in France, the source of the discharge was the Catoca diamond mine in Angola, which began leaking red material from its tailings pool into the Tshikapa River between July 20 and 25. Images track a reddish pollution front snaking its way downstream over the following weeks, eventually reaching the Kasai River in the DRC.

Catoca, the fourth-largest diamond mine on earth, produces nearly 7 million carats of diamonds per year, and according to company filings, in 2019 it recorded more than $800 million in sales. Catoca’s primary shareholders are Endiama, Angola’s state-owned diamond company, and Alrosa, a Russian state-owned company. Alrosa is the largest producer in the industry, supplying a quarter of the world’s diamonds.

“It’s not just some small players that are involved, it’s some of the biggest actors in the diamond industry,” said Hans Merket, a researcher with the International Peace Information Service. “Alrosa is number one, it’s not an obscure player.”

In a Sept. 3 press release, Catoca’s operators admitted that an accident took place at the mine’s tailings basin, but denied that the discharge contained heavy metals or toxins, calling it “sand and clay” and likening it to “mud flows in the rainy season.”

But Catoca’s claim that the spill wasn’t dangerous doesn’t align with reports from provincial authorities in Lunda Norte of dead fish and crocodiles in the Lova and Tshikapa (or Chicapa in Angola) rivers that pass alongside the diamond processing facility.

“The damage reported includes the death of fish on the banks of the Chicapa River. Livestock farmers are struggling to provide clean water for their animals to drink, and some cattle, including goats, have died,” Cláudio Muteba, the provincial director of environment, waste management and community services in Lunda Norte, told Mongabay.

The Angolan environment ministry says it has sent specialists to communities along the rivers to assess the damage, but no results have been released to the public yet. On Sept. 9, Angola’s secretary of state for the environment, Paula Francisco, told local media that investigations were ongoing.

Officials from the DRC have not been permitted to visit Catoca or other mines in the vicinity to test the water for toxins, making it impossible for them to scrutinize the company’s claims.

“It’s up to them to prove that the discharge really didn’t contain toxic substances,” Tshimanga said. “They should accept an investigation from both parties and let samples be taken from the source to downstream so we can analyze them. That’s the simple way for them to prove it.” 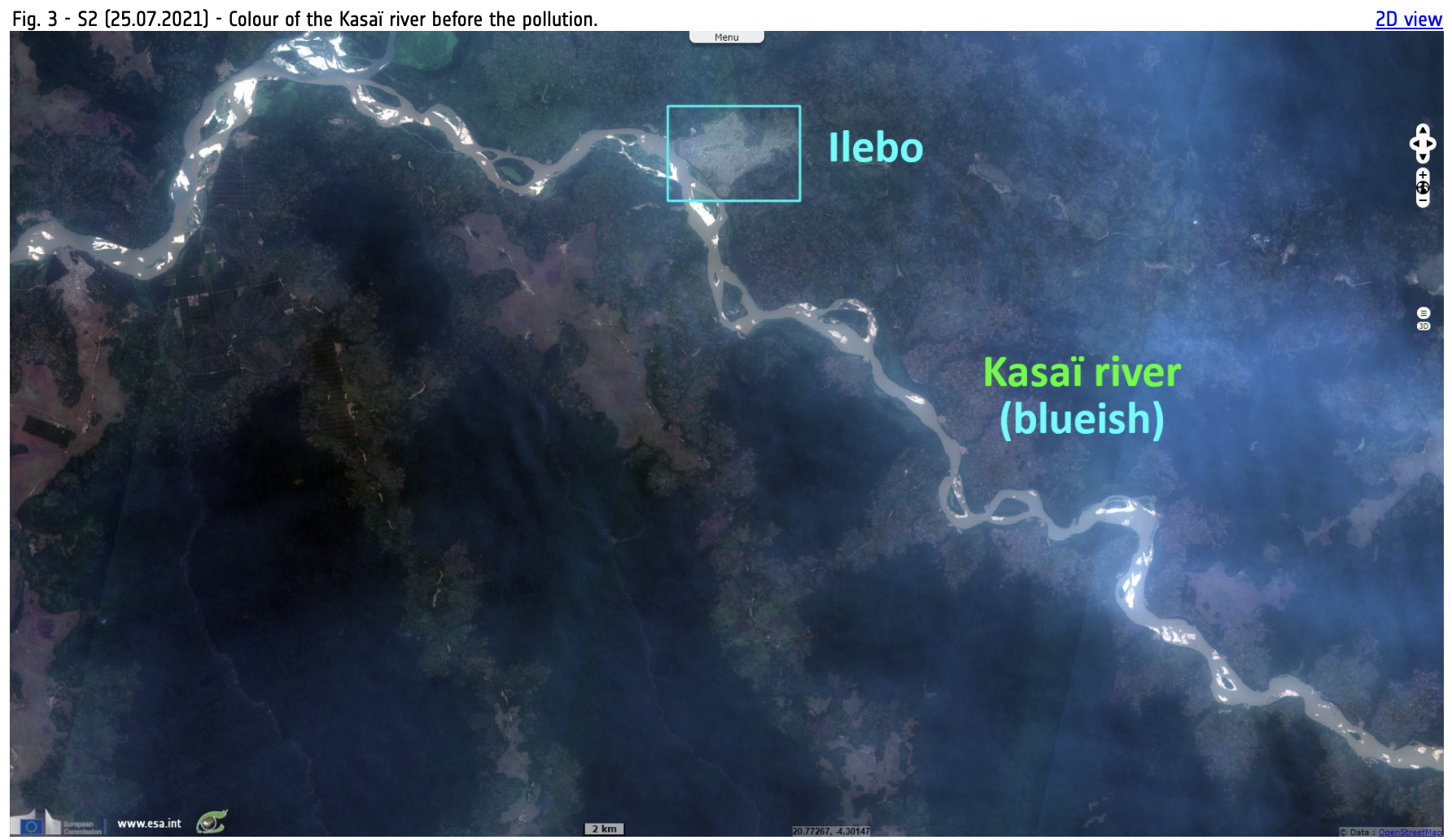 While officials in the DRC have called for restitution to be paid for the spill, a source in Angola’s foreign ministry told Mongabay that a meeting between the two governments scheduled for later this month has been postponed.

Tshimanga said the lack of cooperation between Angola and the DRC in pinpointing the cause of the pollution is proving costly, as the delays make it harder to determine the extent of the disaster and whether there are further risks.

“There is some sort of irresponsibility somewhere,” he said. “There are some people somewhere that are not doing their jobs. From a political level, I don’t know what’s happening.”

In her Sept. 2 press conference, Eve Bazaiba said preliminary testing of water samples taken from the Kasai River (known as the Cassai in Angola) showed high levels of heavy metals like iron and nickel. Tshimanga told Mongabay that the University of Kinshasa is waiting for more detailed results due early next week. But without being able to compare them with samples from near the Catoca mine, there’s no way to say definitively whether the toxins originated from there.

On Sept. 9, Alrosa announced that it had signed a memorandum of understanding with the DRC’s state-owned diamond company, Societé Minière de Bakwanga (MIBA), committing to “dynamic and efficient implementation of future projects in diamond mining.”

For the heavily indebted MIBA, the deal is a lifeline that Congolese officials may be reluctant to jeopardize with an aggressive push to hold Catoca accountable for the spill, Merket said.

“The state-owned diamond miner of DRC has been in trouble for the past decade, they have huge debts and aren’t producing. They need a lot of support, so of course when a big miner like Alrosa, who they’ve been in negotiations with for a while, is willing to give that support it might make them be more quiet in a situation like this,” he said.

Diamonds are notoriously difficult to trace, but Merket told Mongabay that the scale of Catoca’s operations makes it nearly certain that gems produced from the mine often end up on the wrists and earlobes of consumers in wealthy countries.

“Some of these diamonds will be for industrial use, but they will also be used for jewelry in the big consumption markets of the U.S., China and Japan,” he said.

Alrosa’s head of North American operations, Rebecca Foerster, is listed as the president of Diamonds Do Good, a nonprofit that “celebrates the positive impact that diamonds have on communities around the world.”

In southern DRC, the Kasai River has returned to its normal color after a month of being tinged red, but Tshimanga told Mongabay that cases of illness from drinking its water continue to be recorded. He said he’s worried people in the region don’t fully grasp the severity of the disaster yet.

“The pollutants have not disappeared, they are still in the rivers. And these pollutants can now also go into the food chain, through fish and so on. People are using those rivers and resources, and it’s a situation where we have seen the imminent impact, but we are also expecting to see medium- and long-term impacts,” he said.

As communities in the Kasai River Basin on both sides of the border await word on what turned the river red and made them sick, as well as who — if anyone — will take responsibility for the spill, Tshimanga said it’s time for the world to start paying closer attention to it.

“Both countries have signed international conventions on biodiversity and sustainability, on pollution, water resource management transboundary rivers, and so on,” he said. “It’s the world’s responsibility to act as one and ensure that these practices and behaviors are discouraged.”

Banner image: The Catoca mine in Angola in 2020. Image via Catoca’s 2019 annual report.