As humans close in on their habitat, crocodiles in the Philippines snap back

PALAWAN, Philippines — What do you do if you encounter a saltwater crocodile on your way home? For Roozie Quea Idlana, a resident of the town of Balabac in the Philippines, the answer is simple: Just keep walking.

In Idlana’s neighborhood, the houses are built on stilts, tucked within mangrove forests. Encounters with saltwater crocodiles are common for locals, including students like Idlana, when they cross the bridge on the way home. “We don’t really pay much attention [to the crocodiles] except when it’s a large one,” she says. “Growing up, the most dangerous encounter my family had was when a croc snatched our pet dog.”

While coexisting with crocodiles is a part of life in Balabac, the southernmost island in the Philippine province of Palawan, wildlife experts are urging locals to take extra precautions during the breeding season. That’s when saltwater crocodiles (Crocodylus porosus) are naturally more aggressive, according to the Palawan Wildlife Rescue and Conservation Center (PWRCC), based in Puerto Princesa, the Palawan capital.

Saltwater crocodiles are the biggest reptiles in the world, growing to lengths of 6-7 meters (20-23 feet). Courtship begins in the months of November and December, and the crocodiles lay their eggs between March and May, says Deseree Abalo, the PWRCC’s information officer. The eggs hatch 90 days later, from June to August — the same time that human-crocodile encounters increase. 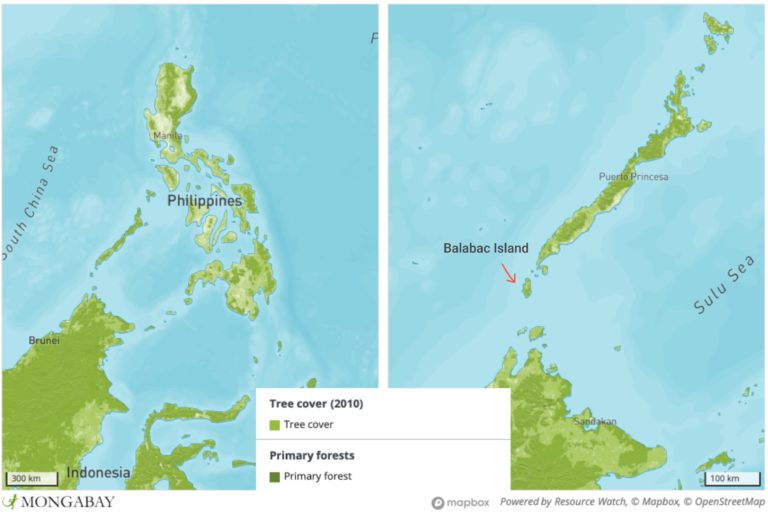 “They become very protective during these months,” Abalo says, adding that female saltwater crocodiles protect their nests aggressively. Residents, especially those living among crocodiles, are discouraged from disturbing them by steering clear of their habitats.

According to Abalo, saltwater crocodile attacks normally result from the unnatural proximity of human communities to crocodiles. Habitat degradation caused by human settlement has changed the suitability of wildlife habitat despite several management interventions. The need for livelihood and residential spaces continues to raise risks to the ecology and lives of both people and wildlife, which is a common problem in places like Balabac.

Known as the Philippines’ “last ecological frontier,” Palawan houses the largest extent of mangrove forest in the country, at 63,532 hectares (157,000 acres), or 4.4% of the province’s total land area.

These mangroves play a significant role in supporting the rich marine life of the province. They serve as habitats and provide food for a large variety of animals including fish, crabs, shrimp, mollusks and crocodiles. They also stabilize the coastline and prevent erosion from typhoons, high waves, storms and floods.

Activities such as cutting mangrove trees, dumping waste, construction within mangrove areas, and illegal fishing result in damage to and destruction of mangrove forests. Philippine law prohibits such acts, including human settlement within reservation areas.

The continued environmental degradation caused by human inhabitants continues to threaten the sustainability of crocodile habitats. Pollution and the general decrease of habitat area diminish food availability and further restricts the movement of crocodiles.

When more humans settle in the habitats of crocodiles, there is an increase in the number of crocodile attacks, says Melijn van Weerd, CEO of Philippine crocodile conservation group Mabuwaya Foundation. The loss of mangrove habitats as a result of urbanization in areas where crocodiles still occur poses problems since the crocodiles suffer losses in habitat and food resources and humans run a heightened risk of being attacked, van Weerd says.

Incidents of crocodile attacks, sometimes deadly, are common in the Philippines. The more people invade the natural habitats of saltwater crocodiles, the more likely these incidents will occur, van Weerd says. “When a person is attacked by a crocodile, this usually leads to a public or political response asking for the removal or killing of the crocodile,” she adds.

According to Palawan Council for Sustainable Development (PCSDS), a provincial government agency, incidents of saltwater crocodile attacks in Palawan increased notably in recent years. In Balabac on Feb. 11 this year, the body of a 62-year-old fisherman was found floating near a mangrove area; he was believed to have been attacked by a crocodile.

Crocodiles avoided humans and steered clear of residential communities five years ago, Idlana says. “Now they sometimes wait for animals to fall [from the bridge] and even human feet,” she adds.

The increased attacks have been blamed on the increasing population of nearby residential communities and the related degradation of crocodile habitats.

The attacks have prompted locals to take matters into their own hands, including capturing crocodiles — an act that’s illegal under the Philippine Wildlife Act. In April this year, residents of Balabac captured a crocodile after it was seen killing animals in the area.

According to locals, crocodiles have also become a threat to their livelihood. Due to attacks, fishermen avoid venturing to the rivers or the sea to fish.

“When [crocodiles’] homes are destroyed, they look for new ones and end up in human communities,” PWRCC says.  “Because of the lack of proper drainage, people’s food goes straight to the waters which attract the crocodiles. Residents also keep their animals near rivers and shores.”

Raising awareness to dial down risk

To minimize the risk to lives, both human and crocodile, conservation groups have called on the local government to implement the Conservation Strategy for Crocodiles in Balabac, which started in 2019 and will remain in effect for the next 10 years.

Under this conservation plan, government units and NGOs aim to end the human-crocodile conflict in Balabac by not only focusing on the protection and conservation of crocodiles but also on the management of human resources.

The plan intends to prevent habitat destruction, minimize hunting, poaching, collection and trading of crocodiles, and promote public awareness about crocodiles. This includes the rehabilitation of mangrove areas, the establishment of crocodile sanctuaries, alternative means of livelihood for families living within or near crocodile habitats, formulation of local ordinances, strict law enforcement, and creation of local task force groups.

The conservation strategy also calls for relocating informal settlers and residents from affected areas, with an emphasis on fulfilling their basic needs as the top priority.

While discussions are underway for relocation, authorities have posted warning signs in areas populated by saltwater crocodiles. Experts have advised residents living near crocodile-inhabited areas to always keep watch, especially at night. They have also discouraged swimming in waters where crocodiles may live, even if there are no warning signs present, and also reminded residents to not throw leftover food or keep animals near rivers and shores where they might attract saltwater crocodiles.

Conservation officials are also carrying out regular seminars and programs to raise awareness about the ecological importance of crocodiles. Easing the hostility, however, between residents and crocodiles may require more information campaigns, says PWRCC’s Abalo.

“They want us to remove the crocodiles. We can’t do that. What we can do is educate,” she says. “Of course, the best solution is still to relocate but it is difficult because people have lived there for so long and their livelihoods depend on the place But it is not the crocodiles’ fault. We are the ones imposing on their habitats.”

Chelsy Mae Abdulmuti is a campus journalist from Palawan, Philippines. This story was part of the Green Beat Program of the Association of Young Environmental Journalists (AYEJ.org).