In Boa Vista, Indigenous Brazilians retake their identity through education

by Nayra Wladimila on 29 June 2021 | Translated by Juliana Ennes

BOA VISTA, Brazil — When she was 24, Ariene dos Santos Lima adopted the Indigenous name Susui. In her ancestral Wapichana language, it means “flower” — the ornament that Ariene Susui would go on to identify with in her many roles: as a journalist, a defender of Indigenous rights in social movements, and a candidate for city councilor in Boa Vista, the capital of Brazil’s northern state of Roraima.

The Wapichana are the second-biggest ethnic Indigenous group in Roraima, behind only the Macuxi. (Macuxi is also the nickname for anyone born in the state.) In the past, members of these two ethnic groups roamed the area that today forms the border between Brazil and Guyana. Wapichana communities still live between the two jurisdictions.

Other ethnic groups from this region, such as the Paraviana, met a more tragic fate: they were exterminated by the first European colonists. “In the entire state, only nine of the 30 peoples still exist,” says Ananda Machado, an anthropologist at the Federal University of Roraima (UFRR). Today, the Paraviana survive only as the name of an upscale neighborhood in Boa Vista.

The initial colonization of Roraima began in the 1700s with the construction of Fort São Joaquim at the confluence of the Uraricoera and Takutu rivers, which join to form the Rio Branco. But it was only in the 1930s that the area saw large population growth, following the discovery of gold and diamonds. A monument in honor of the original prospectors stands in the center of Boa Vista, about 30 kilometers (19 miles) downriver from the fort.

Roraima remains the most sparsely populated state in Brazil, but Boa Vista has seen rapid development. This intense process of urbanization has pushed the Wapichana and Macuxi peoples farther away from the banks of the Rio Branco, and away from much of their original territory.

“My great-grandparents said that the streams within the municipality were used to bathe, wash utensils and have children [give birth],” says Eliandro Pedro de Souza Wapichana, also an anthropologist at UFRR and founder of the Organization of Indigenous People of the City (Odic).

The colonization of the area that would become Boa Vista saw settlers establishing farms on lands previously occupied by natives, Eliandro Wapichana says. Many such estates were the result of land grabs, where settlers would occupy the land, falsify deeds, and register their claims with local authorities.

“To ensure that their space would not be invaded, they [the Indigenous] resisted. They imposed their presence in spaces close to the city. That is why in the process of demarcation some Indigenous reserves are considered ‘islands,'” Eliandro Wapichana says.

The Indigenous communities that still remain in the capital are concentrated in the rural area of ​​the municipality, far from the urban center, in a region known as Murupu. It’s home to 600 families distributed across five areas: Serra do Truaru, Anzol, Morcego, Serra da Moça, and Truaru da Cabeceira.

Ariene Susui was born in Truaru da Cabeceira. The entrance to the dirt road that leads to her home is close to one of the most popular tourist spots in Roraima, Lago do Robertinho, a private lake frequented by Boa Vista’s elite.

Downtown ​​Boa Vista is a 30-minute drive away. But there’s a much larger distance that separates Ariene Susui from the heart of the city. Until the age of 18, she had never lived outside of Truaru. She ate only what the community fished and farmed, and she knew everyone who lived around her. She didn’t even consider a career after high school; her parents only had a primary school education.

Then a teacher at the Indigenous school where she studied told her about the PSEI, the entrance exam for UFRR that allocates seats specifically for Indigenous students. It takes place months before the regular entrance exam. “It was a dream that was born,” Ariene Susui says.

Joining university opened up many other doors for her: she got to know Indigenous social movements; participated in mobilizations, workshops, and meetings with other communities in the state; and became an activist recognized as an advocate for education.

Through the PSEI, Ariene Susui enrolled in UFRR’s undergraduate journalism program. To support herself while studying, she lived and worked as a maid in the home of an upper-middle-class family in the São Francisco neighborhood, one of the most central and wealthiest in Boa Vista. “My mother lived like this here and I thought this was the only way to live in the capital.”

The sense of strangeness was immense, she says. “In Truaru, we are a big family, everyone knows you and helps you, we celebrate and make our food. Here you don’t know anyone, it’s each one for himself. You have to take a bus, work to buy food, and it is industrialized.”

Nearly 6,000 Indigenous people live in Boa Vista, the fifth-biggest population among Brazilian cities. To remain in the city, Indigenous students on the PSEI program who come from the Roraima hinterland can apply for a fellowship called Bolsa Permanência and for a room at the Indigenous student dormitory called Casa do Estudante Indígena.

Students pursuing other streams can take the PSEI or the regular entrance exam. The university’s postgraduate program has a quota of 30 places for minority students, including Indigenous people, distributed across 17 subjects. For the master’s degree in geography, for instance, there is one spot allocated for an Indigenous student.

“For the first time, we are managing to have Indigenous doctors in Roraima,” says Ananda, the anthropologist, who is also a professor and researcher at the Insikiran Institute. “I consider our block to be an Indigenous territory within the university, where [the students] can speak in their [own] languages.”

In Ariene Susui’s family, only her grandparents are fluent in Wapichana, she says. “My parents grew up afraid to speak” because of land disputes between traditional peoples and farmers. “And that is why my generation is not fluent.” This is a situation that’s very common in several families, and one of the peculiarities of the Amazon, Ananda says.

She says UFRR has made great efforts to produce translated learning material to cater to students with different native languages. “If young people see this need to continue to speak their language, they can put their children at school or learn from their grandparents. Monolingualism is not healthy,” Ananda says.

Access to Indigenous-specific public policies like this in cities and communities is one of the achievements of the Indigenous movement, says Eliandro Wapichana. He attributes this to the mobilization of Indigenous people living in urban areas of Boa Vista. Their achievements include differentiated school education, a dedicated health board for Indigenous communities in the city’s east, known as DSEI Leste, and a DSEI just for the Yanomami people in the city.

Nursery schools have also opened within the communities, Eliandro Wapichana says, but there’s been some pushback from the families, who don’t necessarily see the value in teaching traditional languages ​​and religions.

Emerson da Silva Rodrigues earned a master’s degree in social anthropology from the Federal University of Pernambuco (UFPE), in eastern Brazil, and today works in the Boa Vista area. He says that even today there are communities that have no schools, health centers, electricity, or policing. “Access to infrastructure within the Indigenous reserves is very recent, still lacking basic services depending on the location of the reserve.” 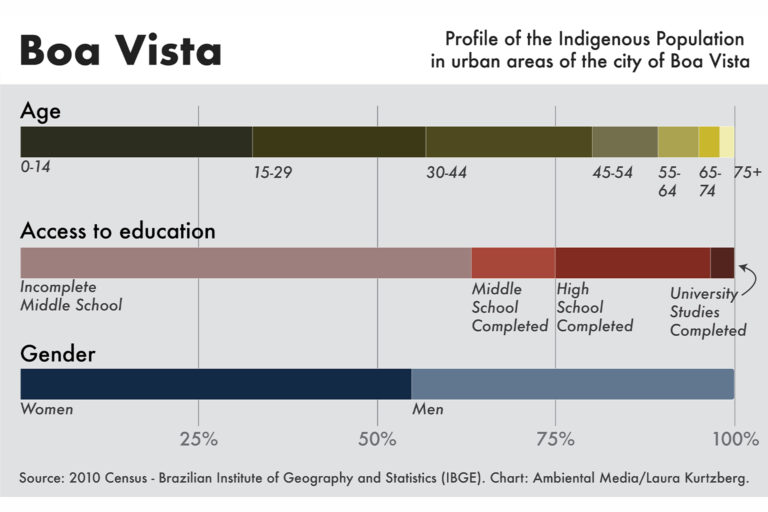 In Boa Vista’s urban environment, there’s no dedicated health care system for Indigenous people, as there would be in the reserves. “It is the idea that ‘If he is integrated, he is no longer an Indigenous,’” Eliandro Wapichana says. Boa Vista’s City Hall didn’t reply to requests for comment.

The health care system is also under strain from the influx of Indigenous people crossing the border into Roraima from Venezuela to escape the economic crisis there. They join the 55,000 Indigenous people who already reside in Roraima and comprise eight ethnic groups (see infographic below), intensifying the problems that already exist in health care. The Warao alone, all from Venezuela, totaled 1,300 people in Roraima in 2020.

Most of them live in shelters run by the Humanitarian Task Force, a partnership between the United Nations High Commissioner for Refugees (UNHCR), the Brazilian Armed Forces, and NGOs such as the Fraternity—International Humanitarian Federation (FFHI). There are two shelters for Indigenous people: one in the Pintolândia neighborhood, in Boa Vista, and another in the municipality of Pacaraima, on the border with Venezuela. Many Indigenous people from Venezuela previously lived on the streets in Roraima.

At UFRR, the Insikiran Institute has become something of a safe space for Indigenous students. But in the wider campus, the atmosphere is less friendly. Reports of discrimination are common, and there’s still a mindset among some faculty that Indigenous students don’t have the same capacity to learn, Ananda says.

There’s also a perception, fueled by the historical disputes over land ownership, that Indigenous people are a hindrance to the development of Roraima. In one of the best-known cases, a hotel and rice farms had to be abandoned when the Raposa Serra do Sol Indigenous Reserve was established in 2005 and the land returned to its original owners.

There’s great animosity toward the Indigenous people who come from the deep within the Roraima hinterland, Ananda says. She describes it as a mentality passed down from the original colonizers.

The disregard for the Indigenous presence also manifests in other ways in Roraima, Ananda says. She points to the Yanomami Indigenous Reserve — the largest in Brazil, which also straddles the state of Amazonas — and the invasion there of illegal gold miners. There are now as many of the invaders there as of the native population, she says, with no response by the government.

She says there’s intense discrimination by people from outside the state against the original inhabitants. Indigenous inhabitants of Boa Vista “have to deal with the contempt of those who consider them lazy and dirty: they are not served in restaurants, they are followed in markets,” Ananda says. “Not to mention that many can only afford to live in neighborhoods without basic sanitation.”

This prejudice often compels Indigenous people to drop out of university, especially women who work in family homes or restaurants, Ariene Susui says.

After initially working as a maid, she now lives with her younger sisters in Jardim Floresta, in the west of Boa Vista, a neighborhood that links the city center to the periphery.

When she was a communications analyst for the Indigenous Council of Roraima, Ariene Susui got even closer human rights movements and their leaders. She says the internet is a powerful tool: both her bachelor’s and master’s degrees dissertations dealt with the use of digital media by Indigenous people. She also talks about women’s empowerment and education at national and regional events — now virtual, due to the COVID-19 pandemic.

The first member of her family to graduate from university, Ariene Susui says she’s thrilled to see Indigenous doctors, lawyers and musicians. “The other people still have that vision of 1,500 of us as the savages in the middle of the woods,” she says. “So it is very important to live here in the urban context, to complete your higher education, to assert yourself as an Indigenous person. The conquest of one is the conquest of all of us.”

The photographer commissioned for this story, Rafael Moura Macuxi, is a member of the Macuxi Indigenous group.

This story is part of the series Indigenous people in Brazilian cities, which project received funding support from the Pulitzer Center on Crisis Reporting’s data journalism and property rights grant.

Banner image: Ariene Susui poses for a photograph at the Federal University of Roraima (UFRR) in Boa Vista. Image by Rafael Moura Macuxi for Mongabay.