However, experts believe – and satellite data confirm – that deforestation in the Colombian Amazon increased last year and that the trend is continuing in 2021. In fact, a year ago, the Foundation for Conservation and Sustainable Development (FCDS) warned that between Jan. 1 and Apr. 15 2020 approximately 75,000 hectares (185,329 acres) of Amazon forest was cut down – amounting to nearly as much as was lost in the whole of 2019.

Data from the University of Maryland (UMD) visualized on Global Forest Watch show  Tinigua lost around 25% of its primary forest between 2002 and 2020, with most of this loss occurring over the last few years and primary forest loss nearly doubling between 2019 and 2020. Preliminary data from UMD’s Global Land Analysis and Discovery lab indicate the park may be in for another rocky year in 2021, as the lab detected several “unusually high” spikes in deforestation activity in January, March and April. 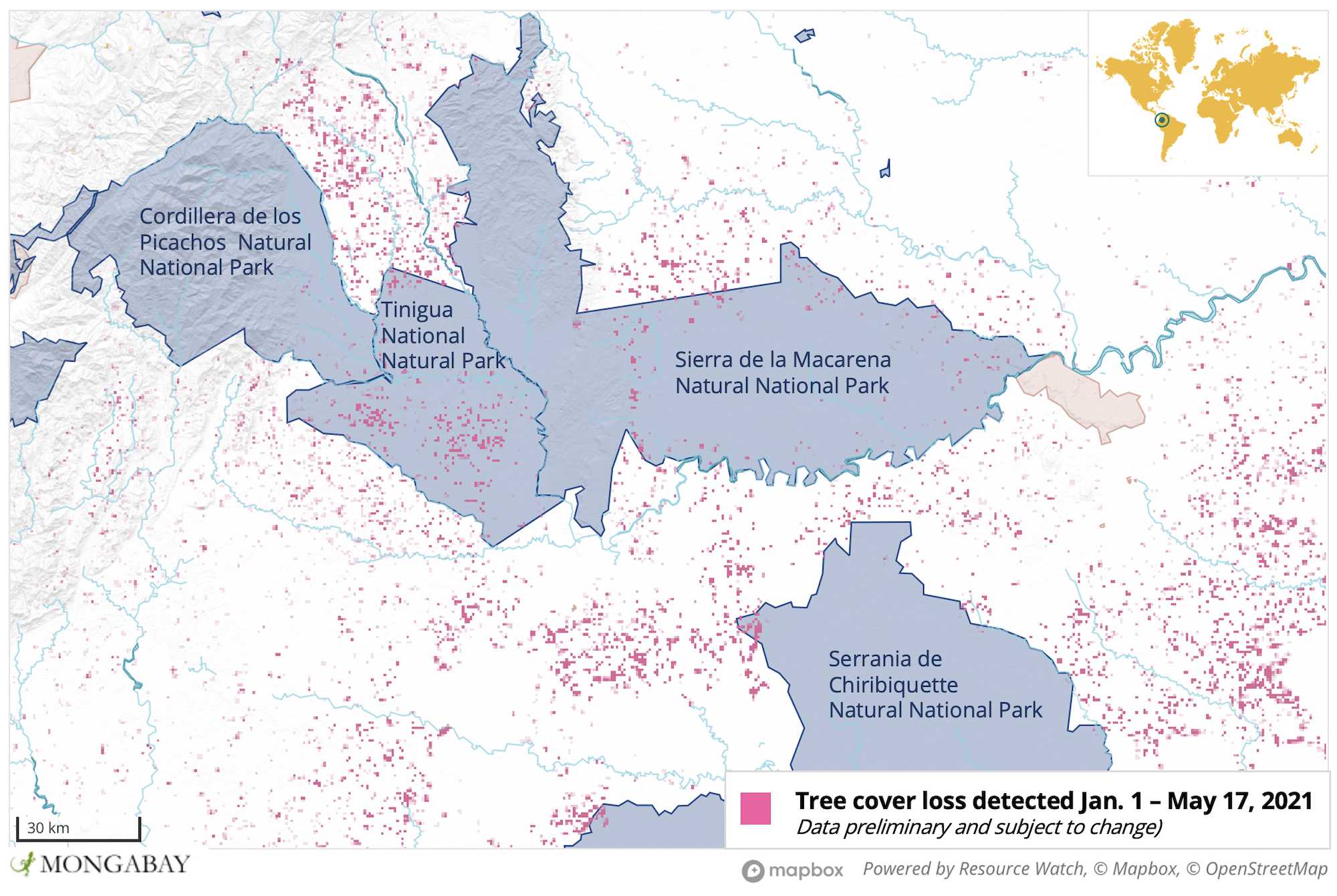 According to Rodrigo Botero, director of FCDS, this deforestation is largely coming at the hands of settlers who are colonizing the park. He said more than 500 families have settled in Tinigua and are clearing forest, particularly south of the Guayabero River.

“The park is already severely affected; new roads and farms have been built and cattle are being brought in,” Botero said. “There is now a corridor of deforestation that stretches from Picachos Park to the north of Chiribiquete.” He added that during flyovers, FCDS detected a significant increase in fire activity between the second half of February and the beginning of March this year.

Botero believes the portion of Tinigua north of the Guayabero River could also be at risk in the future but said this will depend, to a large extent, on the decisions made by dissidents of the Revolutionary Armed Forces of Colombia (FARC) who operate in the area and control much of this territory.

Mongabay Latam contacted the National Natural Parks Department of Colombia to inquire about the uptick in deforestation in Tinigua, but did not receive a response.

The situation has concerned observers for several years. A 2019 report produced by the  Monitoring of the Andean Amazon Project (MAAP), an initiative of the Amazon Conservation Association (ACCA), found deforestation of primary forest in Tinigua increased from less than 3,000 hectares (7,413 acres) in 2017 to nearly 12,000 hectares (29,653 acres) in 2018.

Tinigua is not the only park experiencing an increase in forest loss. In Sierra de La Macarena National Natural Park, which is adjacent to Tinigua, new roads have been built there are new fronts of colonization to the east of the park, “creating an ecological discontinuity in a gigantic area which adjoins the Amazonian plain,” Botero said. “We are seeing the opening and consolidation of a front of deforestation that stretches from Santo Domingo [a rural area of the municipality of Vistahermosa] to La Julia [a rural area of the municipality of Uribe]. It’s very serious.”

Chiribiquete National Natural Park, which lies just to the south of Tinigua and La Macarena, has also been affected. “Serranía de Chiribiquete Park lost over 1,000 hectares [2,471 acres] in the last six months alone [September 2020 – February 2021], in six different areas of the park. Much of this deforestation seems to be associated with the conversion of primary forest to pasture for illegal ranching,” states a MAAP report published February 2020.

According to Botero, a large invasion of settlers is also taking place in the Yaguará Indigenous Territory, which is located in the municipality of La Macarena and is adjacent to Chiribiquete park.

“What is happening in the municipality of Mapiripán, on the south-eastern edge of Meta, is also deeply worrying,” Botero said. “At the beginning of the year I counted five access roads with an average length of 100 kilometers [62 miles]. We are seeing large-scale colonization, with a lot of money behind it, being carried out at an unstoppable speed.”

Botero said it was assumed land grabbing would decline during the pandemic, but the opposite proved true as illicit activities such as road building and pasture clearing surged due to a weakening of enforcement in the Colombian Amazon. Cattle and new roads can be seen in photos from FCDS flyovers.

“The road building is shocking; the tendency for 2020 and 2021 shows us that there is a huge operational and economic capacity for them to be built all over the place,” Botero said. “Colombia stands out because road density in the Amazon region is the highest among all the countries that share the biome. This gives an idea of the intensity of the transformation.”

Mario Barón, director of environmental authority Corpoamazonia in the Caquetá  department, told Reuters that in recent years they have tried to demolish some of the unplanned roads and that locals have been helping to report deforestation.

However, Botero said attempts to halt road expansion can’t keep up with the speed at which they are being built. He urged the national government to provide the official deforestation figures as soon as possible so that the extent of the damage can be known for sure.

“I’m shocked that this machinery [for opening roads] passes through the middle of reservations, national parks and forest reserves,” Botero said. “It does so with or without the presence of [FARC] dissidents, with or without the army. It’s out of control. There are new roads in the most unexpected places.”

This is a translated and adapted version of a story that was first published by Mongabay Latam on April 28, 2021.