It all started with the monkeys. What began as a research effort to understand the black lion tamarin, one of the rarest of the New World monkeys, has blossomed into a network of forest corridors providing income for hundreds of families living alongside the last remnants of Brazil’s Atlantic Forest.

“Fifteen or 20 years ago, the region was a horrible thing. We could see dead nature,” Maria Regina dos Santos, leader of a seedling nursery in the region, told Mongabay. “Today everything is very beautiful. It has improved for the community, nurseries and animals.”

Santos’s nursery supports the work of the Institute for Ecological Research (IPÊ), a Brazilian nonprofit that has, over the past 35 years, planted more than 2.7 million trees and reforested the largest Atlantic Forest wildlife corridor in Brazil.

“It’s one of the only best examples I know of a conservation project and community engagement project that really had a scientific basis,” Robin Chazdon, a global restoration expert and professor at the University of the Sunshine Coast, Australia, told Mongabay. “It really kind of is an emblem of applied conservation biology.”

In a recent paper in the Royal Society Open Science journal, Chazdon and her colleagues tell the story of endangered species conservation and forest and landscape restoration in the Pontal do Paranapanema in Brazil’s Atlantic Forest.

“I just became really taken with what they’d done and really impressed like I’d never been impressed before,” Chazdon said. “And I’ve seen a lot of different projects.”

The Pontal do Paranapanema (Pontal) contains seasonal, semi-deciduous forest, one of the most endangered types of forests within Brazil’s interior Atlantic Forest, which boasts a wealth of biodiversity including pumas, jaguars, ocelots, white-lipped peccaries, and blue-and-yellow macaws.

Most of the forest remained intact until the late 1940s, when a wave of settlement, encouraged by the government, led to widespread deforestation. Settlers slashed and burned forests to make way for cattle ranches, destroying more than 80% of the Great Pontal Reserve in the process.

“The fragmentation of forests is the main threat to the black lion tamarin.” Gabriela Rezende, coordinator of the Black Lion Tamarin Conservation program told Mongabay. “It is an endemic species of the state of São Paulo … in the Atlantic Forest … precisely the area that has been mostly destroyed and fragmented.” 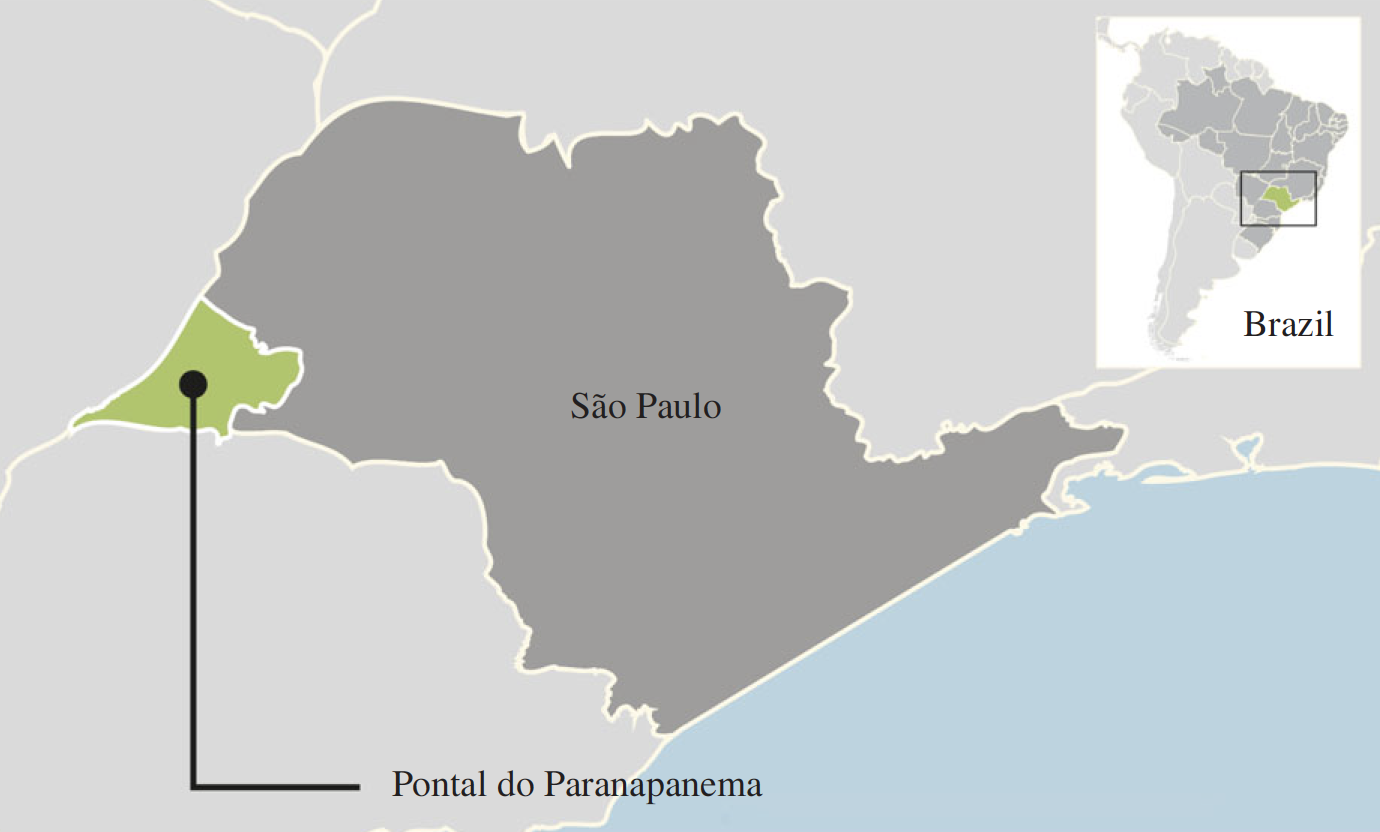 The black lion tamarin (Leontopithecus chrysopygus) was believed to be extinct for 65 years until it was rediscovered in 1970 in Morro do Diabo State Park within the Pontal do Paranapanema. Compelled by the tamarin sightings, Claudio Valladares Padua came to study the tamarins in the mid-1980s. Five years later, Laury Cullen Jr., now the project and research coordinator of IPÊ, came to survey tamarins and found eight small groups of monkeys in different forest fragments. An esrtimated 100 individuals remained in the wild.

Once researchers realized the entire landscape, not just Morro do Diabo State Park, was critical to tamarin conservation, their approach changed. The scientists set out to create biological corridors, connecting the disparate populations of primates. To do this, they knew they would need the help and participation of the farmers and communities living in settlements around the forest fragments.

Thousands of families settled in the municipality of Teodoro Sampaio, adjacent to Morro do Diabo State Park as part of Brazil’s Landless Workers Movement (MST in Portuguese) in the 1990s. MST, a Marxist-inspired movement whose goal is to provide access to land for poor workers through land reform, sought to redistribute lands in the region that were granted to families illegally as political favors in the 1950 and ’60s, after the first wave of settlement in the area.

MST negotiated a deal with the São Paulo state government and landowners. In exchange for an official title to their properties, the large landowners agreed to donate 30 to 70% of their cleared land to “landless” MST families. MST families were awarded land tenure to some of these ranch lands in 1998, and 14-hectare (35-acre) farms were distributed among the families. Much of this land bordered forest fragments and Morro do Diabo State Park, and was not particularly well-suited for agriculture.

Meanwhile, Cullen and others founded IPÊ in Piracicaba, São Paulo state, in 1992. The IPÊ team realized they couldn’t focus solely on saving wildlife when people in the region had basic needs unmet. Many lacked knowledge about local farming and subsistence methods.

“All of this led to the idea that the community would need to be involved in some way,” Cullen told Mongabay. “There were 6,000 families settled near forest fragments with endemic endangered species. Then I brought the idea of ecological corridors, with this tripod: climate, community, and biodiversity.”

IPÊ, in consultation with the MST families, developed a strategy to plant trees on about 10% of the total farm area adjacent to forest fragments and rivers, creating buffer zones, connectivity for wildlife movement, and a source of useful forest products such as firewood, fruits, and fodder that families could use, eat or sell. Planted among these strips were staples such as maize, cassava and beans.

“Families, self-organized in small groups, became involved in every stage of the project, from training and extension to project planning, implementation, monitoring and evaluation,” Chazdon and her co-authors write.

“In most cases, when you have a situation with colonists coming in and taking over, it’s a total disaster, most conservation groups would have just packed up and left and said forget it,” Chazdon said. “To me the pivotal difference of what defined the IPÊ involvement was, let’s bring these people on board. They need help. We need them. Let’s start working together.”

IPÊ set its sights on restoring the region. Supporting wildlife, they reasoned, would mean creating wildlife corridors based on the movement of local endangered animals such as tapirs, tamarins, ocelots, pumas and jaguars. IPÊ used radio-collared jaguars, pumas and tamarins to figure out where animals were moving and to create a map of key routes linking populations.

The vision map was created and refined with the community during sessions called “eco-negotiations.” Years of workshops, trainings, and educational programs for both youth and adults prepared the community members to be a valuable part of the planning process.

A key corridor was identified between Morro do Diabo State Park and the Tucano forest fragment. This route ran through the privately owned Rosanela farm. When Laury Cullen approached the owner, he expressed interest not only for the wildlife but because of the law: Brazil’s forest code requires landowners to restore riparian zones to forest and to have at least 20% of their land covered with trees in the region. As it turns out, strategically restoring forests on private lands could be a win-win for farmers and conservation.

“That landscape vision is so important because each individual farmer could do their [part] for the law and it wouldn’t necessarily make the landscape function very well if it’s not coordinated,” Chazdon said. “Other studies that we’ve been doing with optimization approaches show that the worst benefits come when you have restoration done on individual landholdings in an uncoordinated way.”

Brazil has no requirements to coordinate restoration on private lands, in part because it is very challenging, but this approach shows how coordination can help landowners fulfill their requirements, to the benefit of the whole community and the wildlife.

In areas where connected corridors of trees are not possible, property owners have grown agroforestry patches to serve as “stepping stones” for wildlife moving across a landscape. These patches are typically a 1-hectare (2.5-acre) coffee orchard interplanted with subsistence food crops, including sweet potatoes, banana, papaya, corn, watermelons and beans, where landowners have agreed not to use pesticides or fertilizers. More than 50 families are growing stepping-stone forests.

To date, IPÊ and its partners have restored approximately 3,000 hectares (7,410 acres) of forest in Pontal do Paranapanema, including a 2,100 hectare (5,190-acre) in the main forest corridor, plus another 800 hectares (1,980 acres) in 7 smaller corridors and 100 agroforestry stepping stones on rural properties.

The largest corridor covers 20 kilometers (12 miles) and connects Morro do Diabo State Park and the Black Lion Tamarin Ecological Station, providing critical habitat and resources for the primates. Due to these efforts, tamarin populations are recovering. In 2008, their conservation status was upgraded from critically endangered to “endangered,” with an estimated population of around 1,800 individuals living in the wild today.

All of these tree-planting and agroforestry projects have created a demand for tree seedlings and a thriving industry of local plant nurseries. Women have been largely responsible for managing tree nurseries, while others have learned to identify trees and collect and maintain tree seed stocks.

“I produce native seedlings,” said Maria Regina dos Santos, the seedling nursery leader. “We collect about 100 species of seeds here in the region …Today I live exclusively from the nursery. If I had 300,000 seedlings a year, I would sell them all. You can live well if you work well. You have to work hard, but working is good.”

In 2019, the Pontal region produced about 885,000 seedlings, generating $450 per month per family. The average monthly income of a rural family is the Pontal is $625, meaning seedling production can provide more than 60% of a family’s monthly income. Growing seedlings, planting trees, and maintaining the reforested plots, especially in the first few years of growth all create jobs for the community.

“The restoration process is a strong tool in generating income,” Cullen said. “For every 1,000 hectares restored, we generate 100 direct jobs. It’s a lot of people involved. For every $1 million invested in planting native forests, we generate 30 direct jobs. This is five times more than the oil and gas industry, for example.”

“When my father came here … he had no land, but, like everyone else, he worked for others, cleaned for people to plant, or set up a brick work,” Iraci Lopes Corado, leader of a seedling nursery in the area, told Mongabay. “So, in a certain way, I say that my father deforested, and I work today to rebuild.”

IPÊ has been able to financially support its efforts through grants and donations, as well as buy-in from international companies and organizations seeking to offset their carbon emissions. By converting cleared land back into forest, carbon is absorbed from the atmosphere and stored in the trees. IPÊ can sell this service into a carbon market, generating finds for reforestation.

Many lessons can be learned from the success story of IPÊ in the Pontal, Chazdon and her co-authors write, which serves as a glowing example of the forest landscape restoration (FLR) approach, widely heralded as the gold standard across the restoration sector.

In alignment with FLR principles, this story demonstrates that projects are more likely to thrive and persist when the input and needs of local communities are centered. Educational programs, training and workshops to build the skills of community members allow them to fully participate both in management and decision making over time. For instance, the local ownership and management of seedling nurseries, particularly by women, continues to sustain both families and forests in the Pontal.

Another key lesson is that community-based conservation needs to be long-term with a sustained, organized, institutional presence. Restoration works best at the landscape scale, but landscapes can be regenerated via small fragments, especially when stewarded by a consistent guiding presence, such as IPÊ, and coordinated vision. Building trust among all of the stakeholders takes time and is an essential ingredient.

“We have a very good relationship with landowners with local communities within municipalities,” Cullen said. “So I think I think that that makes a difference and we see this working on the ground. You know, trust for us, trust and pride…are key words that hold the relationships.”