Mining and logging threaten a wildlife wonderland on a Philippine mountain

MINDANAO, Philippines — Rising 2,064 meters, or nearly 6,800 feet, above sea level, Mount Busa is the tallest peak in the Philippines’ Sarangani province and home to one of the last verdant primary forests on the southern island of Mindanao.

Busa is known as Bulul Tembob to the T’boli tribe, who consider it hallowed ground, a place where they worship their deities, connect with the spirits of their ancestors and commune with nature.

The mountain, located in the town of Kiamba, some 1,700 kilometers (nearly 1,100 miles) southeast of the capital Manila, was designated a key biodiversity area (KBA) and bird conservation area in 2001, and is considered a high-priority site for conservation in the Philippines.

Overlooking Moro Gulf, Busa enjoys a marginal level of protection: The northern slopes are part of the larger Allah Valley Protected Landscape (AVPL), but the 114,000-hectare (282,000-acre) mountain, known globally for its rich biodiversity and bird sightings, has yet to be declared a protected area.

A growing number of species sighted and surveys conducted in recent years have led to a deluge of new species being described from the mountain, prompting the local government to declare its massif, the principal mountain mass, a local conservation area in March 2020. Under this designation, the mountain — or at least the upper slopes — are one step closer to being under a legal protective framework.

However, the designation still falls short of stopping the growing pressure the mountain faces from mining, logging, hunting and poaching.

Environmentalists and local officials have called for Busa to be formally, and legally, declared a protected landscape under the country’s Expanded National Integrated Protected Areas System (E-NIPAS), a 2018 regulation that aims to ensure the ecological integrity of protected areas and mandates the creation of management boards for declared protected areas.

Mt. Busa is home to the rare Guttman’s stream frog (Pulchrana guttmani), an endemic shiny frog that was not seen between 1993 and 2020, leading scientists to believe that it had gone extinct. It is also known to host the Philippine eagle (Pithecophaga jefferyi), the country’s rare national bird. In the past three years, at least two Philippine eagles have been rescued in the vicinity of the mountain.

An avian survey of the mountain’s southern slope, which has never been assessed by biologists in the past, was carried out by the Philippine Eagle Foundation (PEF) and the Department of Environment and Natural Resources (DENR) in the past year. The results sealed the mountain’s ecological importance; Busa, experts say, is one of the remaining strongholds of the Philippine eagle and other birds.

“Despite the limited survey effort, the results clearly indicate that the Busa Mountain Range harbors a rich assemblage of bird species hinting at the substantial level of biodiversity this mountain range hosts,” the study notes. “More importantly, this area houses a significant number of species threatened with extinction which is of high priority for conservation.”

Busa is also gaining recognition for its plant biodiversity; at least 108 species of flowering orchids from 51 genera, of which 53 species are endemic to the Philippines and 15 species are known only to occur on Mindanao Island, have been discovered in its forests.

Since 2018, biologists Kier Mitchel Pitogo and Aljhon Jay Saavedra have been conducting a biodiversity assessment at Busa, recording more than 600 wildlife species thriving in its forests, including the Guttman’s stream frog and an abundant array of orchids.

“[The] results [of the assessment] suggest a relatively rich and distinct orchid diversity among different forest types in Mt. Busa that reinforces the high conservation value of the mountain range,” the authors wrote.

“It is very likely that there are more unknown orchid species within Mt. Busa; that’s why it is very important to declare it as a protected landscape,” Pitogo told Mongabay.

Of the newly documented species of orchids on Busa, at least four are putatively new and undescribed species: Bulbophyllum sp. 3, Calanthe sp., Coelogyne sp., and Dendrochilum sp. 2. At least nine species are also new island records for Mindanao, having been recorded in the two other main islands of Luzon and the Visayas, the authors said.

Many of these species are already being collected for ornamental use by the four tribal communities in the vicinity of the mountain.

Of the 32 orchid species used as ornamental plants by local people, the study noted that five species are on the DENR’s list of threatened plants. Of the five, one is listed as critically endangered (Grammatophyllum wallisii), three as endangered (Phalaenopsis sanderiana, Phalaenopsis reichenbachiana and Renanthera monachica), and one as vulnerable (Phalaenopsis mariae).

Pitogo says the orchids recorded on Busa might become extinct if they’re not guarded against poachers and people who visit the mountain range for trekking or to commune with nature.

When the COVID-19 pandemic broke out early last year, interest in plants surged across the Philippines, giving rise to so-called plantitas and plantitos, often middle-aged women and men who became instant plant lovers. The craze, which extended through Mindanao, prompted the DENR to issue a warning against poachers.

“Because most of these orchids are beautiful with their vibrant colors, visitors are tempted to bring them down not knowing they might be exterminating the last of their kind,” Pitogo said. 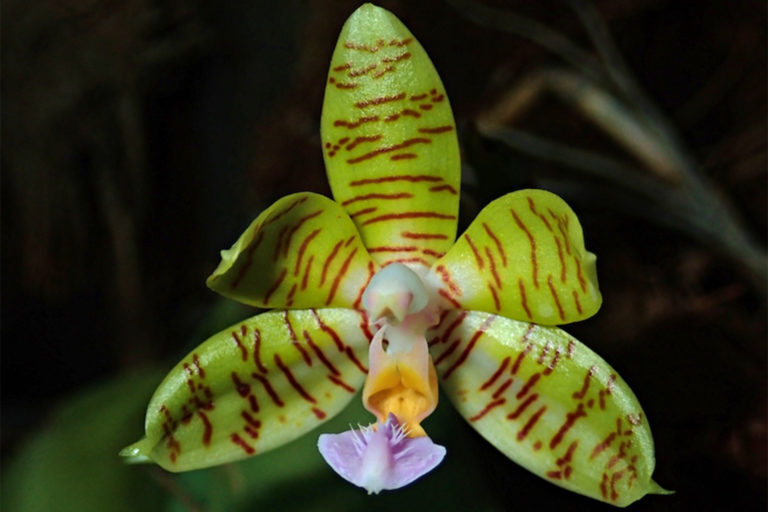 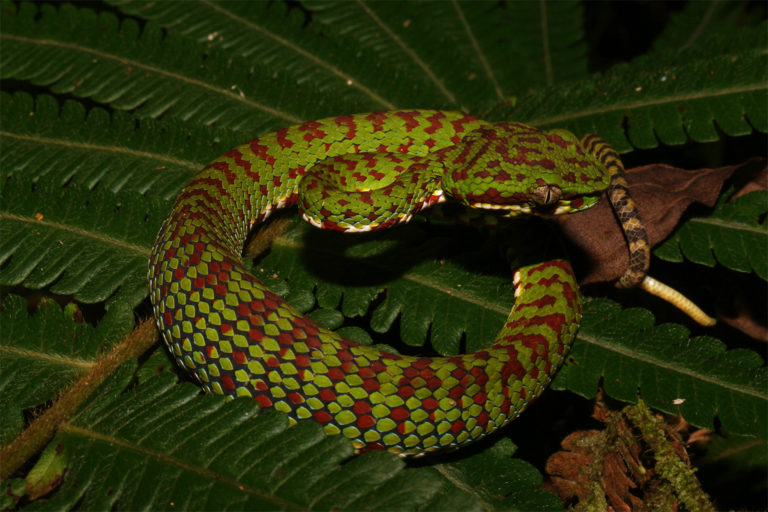 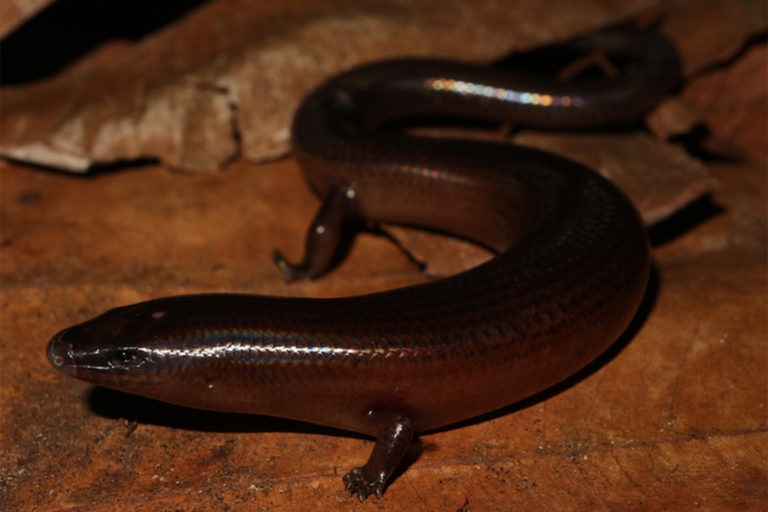 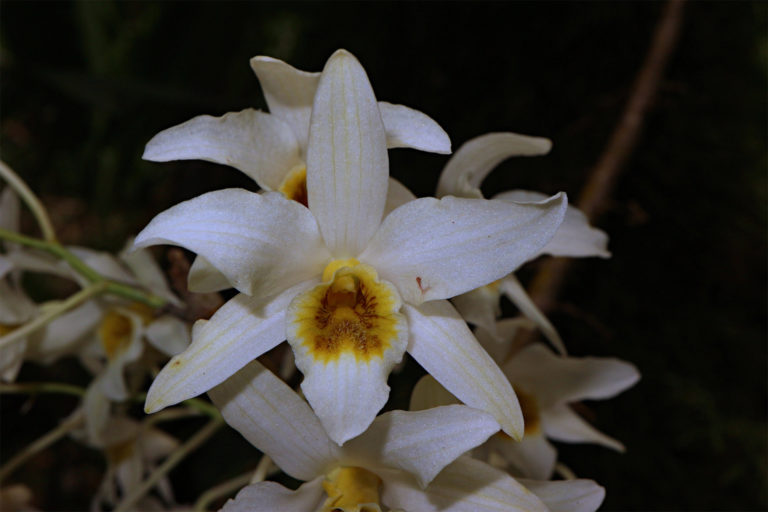 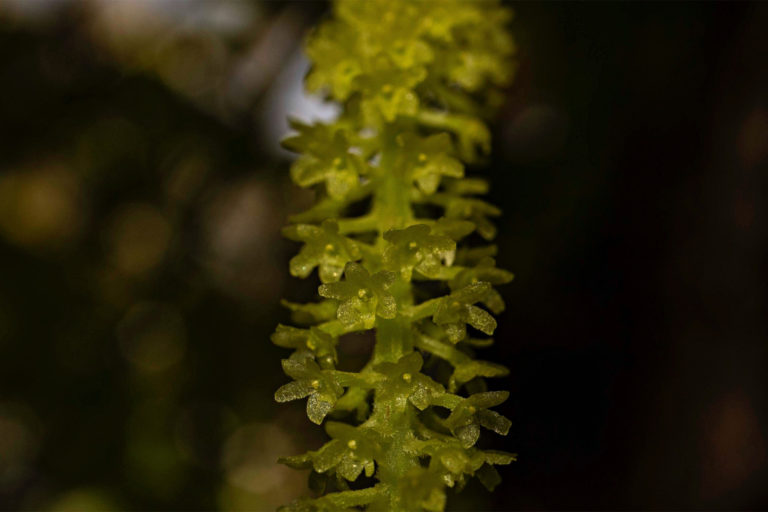 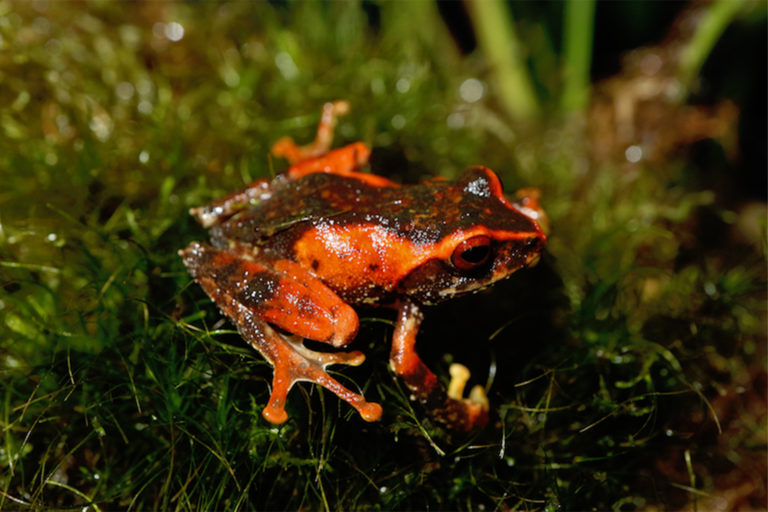 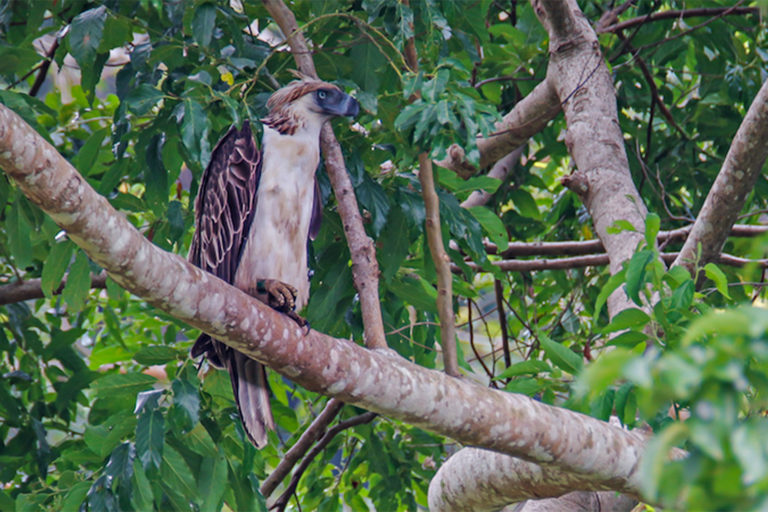 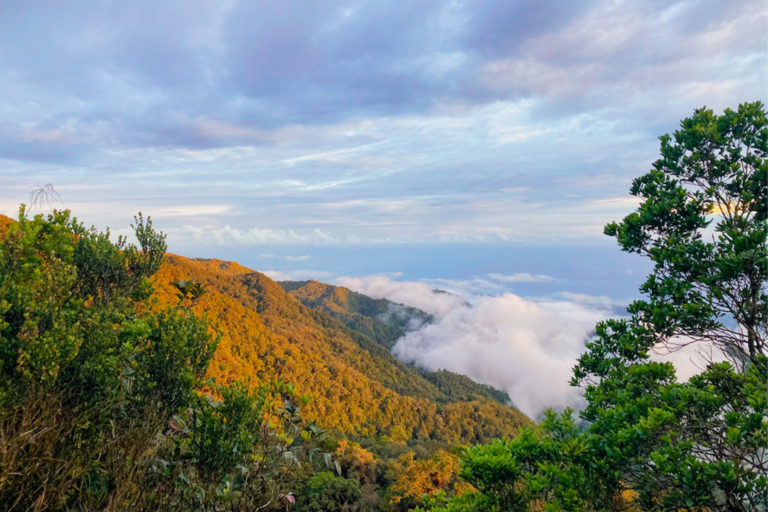 Compounding the threat to the orchids thriving in Busa is the lack of knowledge among the law enforcers at the various highway checkpoints ostensibly set up to check that wild plants and animals aren’t being smuggled out.

Of the more than 100 orchid species that have been recorded on Busa, only four are included among the reference photographs used by officials at these checkpoints, according to Pitogo.

The area faces threats from more than just plant enthusiasts, though.

Deforestation arrived much later to this area than in the rest of the Philippines, in part due to armed conflicts that served to keep both poachers and business interests at bay. In the early 1990s, authorities handed out logging concessions for the mountain’s lower slopes, which paved the way for slash-and-burn farming, or kaingin to locals, illegal logging activity, mining, and wildlife hunting, Pitogo said.

Among these, small-scale gold mining, mostly illegal, has beckoned outsiders. Records from the Mines and Geosciences Bureau showed there have been applications for copper, gold and iron ventures in the area.

The orchids, eagles and other wildlife that depend on this ecosystem will have greater chances of thriving if the Busa mountain range is declared a protected area under the E-NIPAS law, Pitogo and other local environmentalists say.

Such a declaration would immediately prohibit a range of ongoing activities: poaching or disturbing the wildlife; hunting, taking or collecting any wildlife or byproducts; and cutting, gathering or removing timber without a permit. Violators would face fines ranging from 50,000 to 5 million pesos ($1,034 to $103,400), and prison terms ranging from six to 12 years.

In March 2021, the Task Force for Mt. Busa Conservation passed a measure endorsing the declaration of the mountain and the adjacent watersheds as a protected area under the E-NIPAS law. Stakeholders, through a series of meetings, proposed naming the protected area the Mt. Busa-MAKIMA Sarangani Protected Landscape. MAKIMA stands for Maasim, Kiamba and Maitum, the towns that are straddled by the Busa mountain range.

“This is the fruit of the concerted efforts of the people who believed in the importance of the protection and conservation of globally threatened flora and fauna that are present in Mt. Busa, which are vulnerable, unique and irreplaceable,” says Cornelio Ramirez, Jr., head of the Sarangani Environmental Protection and Conservation Center.

Pitogo, whose study highlighted habitat destruction and unsustainable harvesting as major threats to orchids not just in the Philippines but the rest of the world, said he welcomed local efforts to declare Busa a protected area for the conservation of the mountain’s rich biodiversity. He also called for massive education awareness campaigns to be conducted among locals to help conserve not just the orchids but also the whole of Busa as a home to a rich biodiversity of flora and fauna.

With the assistance of the tribal members, Pitogo said, they are looking forward to more explorations within Busa to document other species thriving in its forests.

“There’s a dearth of biodiversity assessment in Mt. Busa,” he said, “particularly orchids, which my team is trying to fill up to help the local government units and the DENR in monitoring the trafficking of these charismatic plants.”