A new initiative to mobilize at least $1 billion to reward tropical countries for halting deforestation was announced April 22, Earth Day, at the Leaders Summit on Climate hosted by U.S. President Joe Biden. The initiative, called the LEAF Coalition (Lowering Emissions by Accelerating Forest finance), will offer significant economic incentives for protecting tropical forests by selling carbon credits for avoided deforestation. Part of the goal is to prevent developing nations from having to choose between ecological integrity and economic progress.

Launched by Norway, the U.K. and the U.S., LEAF is a public-private alliance that also involves companies including Amazon, Airbnb, Bayer, Boston Consulting Group, GlaxoSmithKline (GSK), McKinsey, Nestlé, Salesforce, and Unilever. Emergent, a U.S. nonprofit set up by the Environmental Defense Fund (EDF) in late 2019 for this purpose, will provide the platform and function as an intermediary buyer, speeding up and standardizing the credit-buying process for both forest-nation sellers and international buyers.

The marketplace created by LEAF aims to offer a consistent, long-term source of demand for developing countries that manage to effectively protect their tropical forests. The goal is to make forests more valuable to those countries if they are left standing.

“Finally, tropical forest countries can be assured that financial rewards are available if they can demonstrate reduced deforestation,” Norwegian Prime Minister Erna Solberg said in a statement.

The announcement is one of a series of global events taking place in 2021 in the lead-up to the U.N. Climate Change Conference (COP26) in Glasgow in November, stoking a sense that after decades of frustrating stalling, momentum may finally be building to adequately address climate change.

“The time for incremental solutions is past,” Eron Bloomgarden, executive director and founder Emergent, said in an interview with Mongabay. “We had to ask, what are the big, bold ideas that can move the needle far and fast?”

After 20 years of working in the climate sector, Bloomgarden arrived at a cost-effective solution that he believes fits the bill: a robust market for carbon credits tied to tropical forests.

The idea is not new: Since the late 2000s, a number of forest conservation proponents, from the United Nations to large NGOs, have been pushing the concept REDD+, which would pay tropical forest nations to reduce emissions from deforestation and forest degradation. But REDD+ has struggled to mobilize the kind of resources needed to meaningfully slow tropical forest loss: the ruin of primary forests increased 30% in the 2010s, relative to the 2000s, and jumped 12% from 2019 to 2020. Yet according to some estimates, tropical forests have the potential to contribute about one fourth of cost-effective climate change mitigation by 2030 if enough funding is effectively deployed. 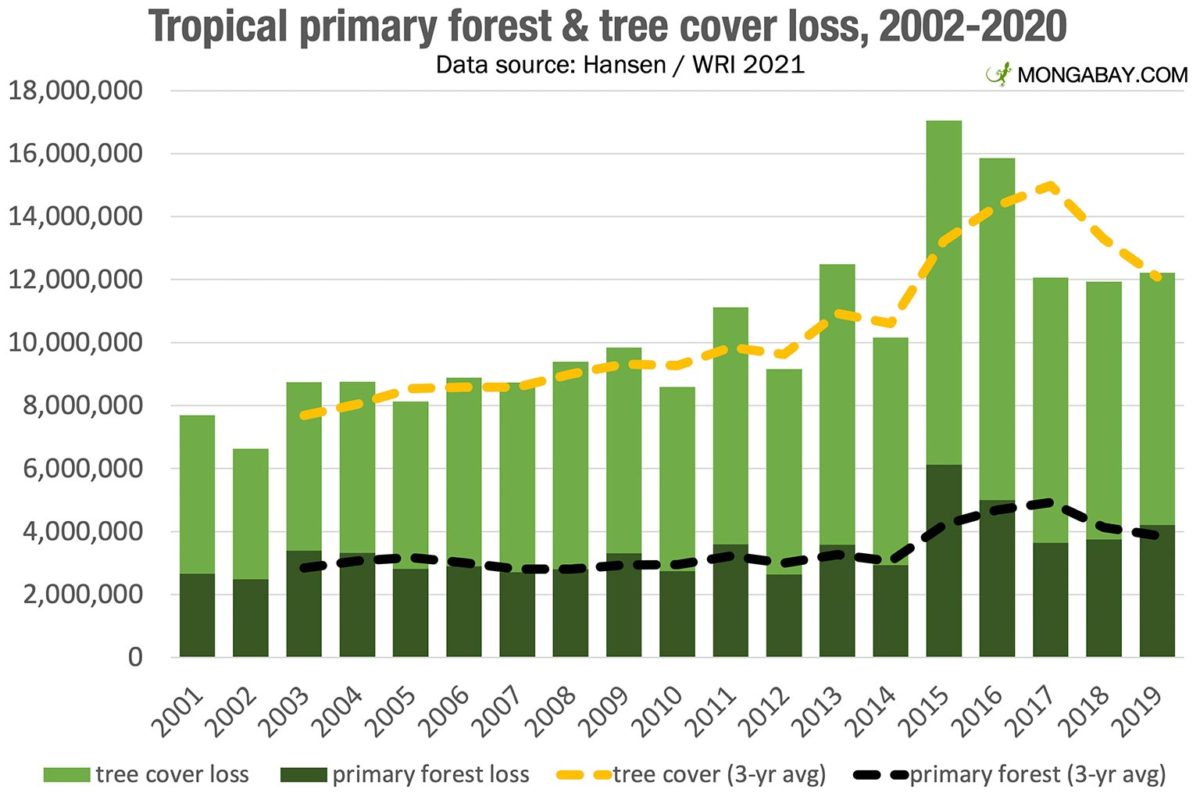 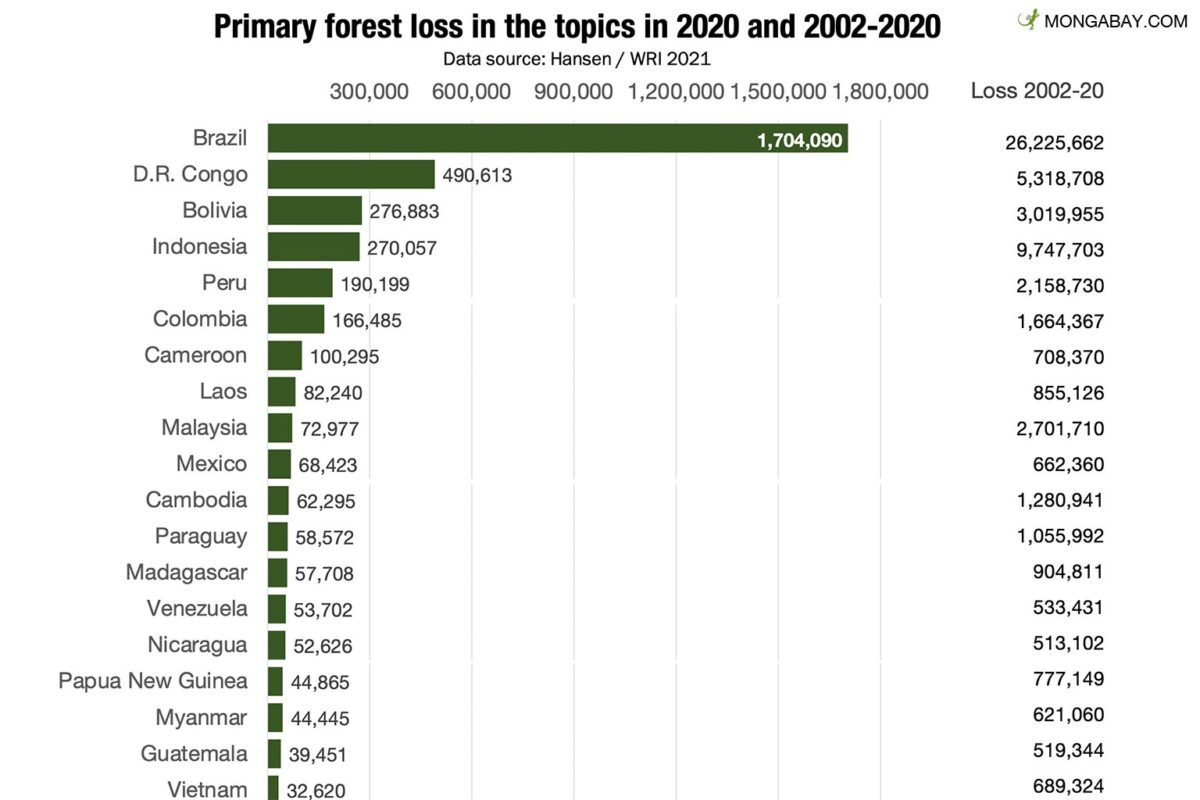 Several features of LEAF’s carbon credit model make its creation a watershed moment for climate and forests that according to its backers delivers on the original ambitions of the concept of REDD+.

“The price point is a bit of a breakthrough,” Bloomgarden said. “Historically it’s been at $5 a ton.” By guaranteeing countries a price of at least $10 per ton of carbon, Bloomgarden said LEAF was “sending a signal that this is a new paradigm.”

The $1 billion in funds will come in approximately equal proportions from national governments and private companies, although the exact contributions will not be announced until later in the year when the contracts are signed. Public commitments will prop up LEAF’s $10 per ton floor price, while private companies are expected to offer higher prices in some cases.

The current estimate of the social cost of carbon is more than $50 per ton, and commercial prices for carbon are expected to rise. But the credits purchased by a company cannot be sold at a profit. Any windfall from a rise in carbon price goes back to the tropical country that generated the credits, rather than the company reselling the credits. The approach thus discourages trading and speculation on the platform.

Buying carbon credits is a tool that companies can use to meet net-zero goals, compensating for emissions elsewhere in their operations, although the coalition underscored that companies participating in LEAF remain committed to “deep voluntary cuts in their own greenhouse gas emissions, in line with science-based targets and consistent with the long-term temperature goals of the Paris Agreement. Their contributions to the LEAF Coalition come in addition to, and not as a substitute for, internal emissions reductions,” meaning that a company can’t say it failed to deliver on its emissions reductions and then buy more credits to make up for the shortfall.

Not everyone in the NGO world is on board. Carbon Market Watch, an activist group critical of forest carbon credits, expressed concern about how companies might present themselves in the context of carbon accounting. They say that more information is necessary.

“We need to channel finance to forest conservation on a large scale, and we cannot use this as an excuse to continue polluting,” Gilles Dufrasne, policy officer at Carbon Market Watch, said in a statement. “Today’s announcement goes in that direction but doesn’t rule out that companies will abuse the system to claim that they have no net impact on the climate.”

“An emission reduction should only be counted once,” Dufrasne added, “and the new coalition should more clearly explain how they will ensure this. The risk of double counting the reductions, once by the country where they take place and once by the company buying the credits, remains.”

But according to Bloomgarden, LEAF is the first carbon marketplace to have high-integrity criteria for buyers as well as sellers.

Several of the companies participating in the initiatives voiced support for the role forests play in the effort to address climate change.

“We are committed to be carbon net zero and nature net positive by 2030,” said Emma Walmsley, CEO of GSK in a statement.

Speaking for Amazon, Jeff Bezos said, “Climate change is the greatest threat to our planet, and the LEAF Coalition offers us an opportunity to bring together governments and companies to fight it.”

As for the sellers, LEAF says the integrity of their carbon credits will be guaranteed through ART/TREES, a stringent REDD+ standard that has been tested and refined over the last decade. ART/TREES uses conservative baseline estimates, which then contract over time, eventually reaching zero as deforestation is halted.  With LEAF, deforestation is measured across what is termed “jurisdictions,” each of which is at least the size of Sicily.

Judging performance across such large units of land reduces the likelihood of credits being awarded when deforestation has in fact simply been displaced, a carbon accounting problem called “leakage.”

With these methods, the platform seeks to offer what is known as additionality, ensuring that funds go to reducing emissions rather than paying for reductions that would have happened anyway in the absence of the program.

Dan Nepstad, the head of the Earth Innovation Institute, an NGO that has been pioneering the development of jurisdictional REDD+ program for more than a decade, said LEAF marks a significant development for the sector.

But he expressed skepticism that many projects are prepared to meet the requirements of ART/TREES.

“Some important countries, such as Brazil, are not currently planning to allow states to engage in ART/TREES transactions, for example,” he said, although three Brazilian states have already submitted concept notes that would make them eligible to have their carbon credits sold through LEAF. “In most tropical forest nations, important public policy, legal and operational steps must be taken before payments can flow.”

He also expressed concern about the political will for reducing deforestation in some countries, as well as the level of funding available.

“Is there political appetite in tropical forest states and nations to invest heavily in reducing deforestation today for payments that may begin in only a year or two or more? If elections are on the near-term horizon, with payments taking place after those elections, the answer is probably ‘no,’” he said. “One billion dollars is an important beginning, but must ramp up rapidly.”

Frances Seymour, a senior fellow at World Resources Institute (WRI) and chair of the board of ART, neither of which are members of the LEAF Coalition, says the initiative could prime the pump for broader efforts to save and restore forests.

“If the coalition succeeds in attracting the participation of an increasing number of companies and supplier country governments willing to meet these higher benchmarks of climate ambition, it will help realize the long-delayed promise of REDD+, and make a substantial contribution to reducing overall global emissions,” she told Mongabay. “And not a minute too soon.”