Deploying art to care for nature: Q&A with Tom Eddington

Talk to an environmental NGO and they’ll more than likely tell you there’s not enough philanthropic dollars going toward environmental causes. According to Forbes, The Nature Conservancy is the sole environmental NGO in the U.S. to crack top 50 in terms of budget size, making it the only environmental organization in the United States with a budget of more than $1 billion. At the opposite end of the spectrum, there exist seemingly countless small NGOs spread around the world’s most biologically significant places doing critical work, and they may lack access to funding sources.

Scant resources and tight budgets compound the problem and scale of environmental degradation impacting us daily, contributing to inaction or feet dragging at this critical juncture.  While headway can be made in government and in the private sector, through trade agreements, protected spaces, sustainability commitments, emission standards and other meaningful environmental protections, many everyday people may be unaware of how to meaningfully chip in. Most of us, though, are in a position to do something. And some of us may even be in the privileged position to donate money, helping to tip the scales in environmental philanthropy to a level that corresponds to the seriousness of the threats we face.

Tom Eddington is among those who don’t have a formal background working in conservation, but is energized to do his part. A business adviser and executive coach by trade with a diverse network, he has recently thrown his hat in the ring to raise funds for conservation organizations that are working to protect a variety of species and ecosystems. With his background, Eddington has launched ENDANGERED, an awareness building and fundraising campaign that will leverage art sales to raise money for a selected group of environmental organizations.  ENDANGERED is in the beginning phase of the media campaign, which will bring together musicians, celebrities and other influencers to drive fundraising, with a goal of reaching nearly $42 million.

With biodiversity loss front and center at ENDANGERED, Eddington says he understands the value of utilizing charismatic species to capture the public’s attention. While that strategy is nothing new to fundraising, he does have a different offering in the partnerships he’s developing with artists. Among them is New Mexico-based artist Kimberly Webber, whose original art and prints depicting certain species will be sold to raise funds benefiting specific nonprofit organizations. Mongabay, as a not-for-profit environmental news outlet, is on ENDANGERED’s list of organizations to support, and Webber’s “Lioness” was created on our behalf.

Mongabay spoke with Eddington recently about the campaign. The following Q&A has been lightly edited for style.

Mongabay: Please tell us about your background. Can you draw a brief arc that connects your personal and professional history to where you’ve ended up today, directing an ambitious fundraising campaign for the environment?

Tom Eddington: “The arc of the moral universe is long, but it bends toward justice.” Dr. Martin Luther King, Jr.

Each of us has an arc to our lives that bends toward our true nature. In my case, I never could have imagined that the arc of my life would have brought me to ENDANGERED. Looking back, there is a logic in where I have arrived having grown up on a small family farm spending much of my life in nature. Combining this love of nature and with my lifelong love of art and music with and several decades serving as a partner in a global management consulting firm, working on the most complex business transactions with some of the largest companies, as well as 30 years of experience in the nonprofit sector — it all makes perfect sense.

Mongabay: What exactly is ENDANGERED and what do you hope to achieve?  What is the impetus for launching it now? What makes this moment special?

Tom Eddington: ENDANGERED is a global campaign, initially reaching about 175 million people, to open hearts and provide funds through music, fine art and film to address the mounting crisis of biodiversity. In opening hearts, we have an opportunity to raise awareness and human consciousness. Through the sale of fine art, ENDANGERED initially plans to directly raise nearly $30 million in funds for the ENDANGERED nonprofit partners.

The impetus for launching now is the urgency required. Of the approximately 8 million species on the planet, about 1 million are endangered. This decade is the most critical in human history. We still have time to change this situation but we must act now.

Mongabay: Let’s talk about Kimberly Webber, a primary artist behind the ENDANGERED Campaign’s art that will be sold to raise money for environmental organizations. I was fortunate enough to view Webber’s work in person at the Los Angeles Art Show, and I was struck by its beauty and especially enjoyed learning about the unique process behind its creation. Can you talk about what makes this art special?

Tom Eddington: Kimberly Webber was one of the inspirations for the ENDANGERED Campaign. She has been painting images of animals and nature for decades and making donations to nonprofits working to protect them and their ecosystems.

We’ve been fortunate to have other artists including Shepard Fairey and Michael Muller join the campaign helping to create an ecosystem of artists, filmmakers and musicians working to expand and support Endangered. Kimberly spends a year or more working on each of her paintings. She brings her talent, honed over decades, and she also brings her passion, love of nature, and channels this energy into her work. She’s one of only a couple of artists in the world who uses a centuries-old rice paper painting technique that is a fusion of Eastern and Western artistry. She creates her own pigments from elements she has collected from around the world, applying layers of the pigments which result in her extraordinary work.

Mongabay: Let’s shift gears to the organizations you hope to support through the sale of the art. Who stands to benefit from this campaign?

Tom Eddington: Conservation is local and the protection and preservation work being done affects all of us globally. With this in mind, we’ve selected nonprofit partners working in their local communities to protect and restore the local ecosystems and the species that inhabit them. All of us benefit from the ENDANGERED Campaign. The global scope of the campaign will ensure that all citizens of the world will be positively impacted. We’ve intentionally selected keystone species for the campaign as it’s much easier for people to identify with rhinos, snow leopards, giraffes, monarch butterflies and lions. But, most of the partners’ work is focused on the entire ecosystem even if they are working with a specific species.

ENDANGERED plans to deliver $1.575 million in direct funding to each of our NGO partners. And it is our expectation that through the awareness raised from the campaign, they will each get five to 10 times this amount in donations. The combination of the funding, donations and awareness will result in a significant impact on the important work they are doing.

There are approximately 1 million endangered species in the world. It is our hope that this initial campaign is just the beginning to help remove as many of the species as possible from this list.

Mongabay: Can you touch upon the scope of the network you are building to support this campaign? Who is involved? Are there any other notable components of the campaign that the Mongabay audience should be aware of?

Tom Eddington: Time in nature is something we all yearn for and art has a way of reaching people. Our souls crave beauty, and nature as well as art can help meet this craving. These are expressions of beauty that we respond to. Music has a way of reaching people through their heart. We all can be instantly transported back in time as soon as we hear a song. So, we have incorporated art, music and film into the campaign.

We are engaging musicians and filmmakers in each of the countries where our NGO partners are working to produce a song, music video and short documentary film to record the conservation work being done. We’re combining this with some of the most recognized names in film and music Diane Warren, Smokey Robinson, Denny Laine, Yolanda Adams and the Ebenezer Baptist Church Choir — who are contributing their voices and a song.

Through this combination of artists, musicians, filmmakers and NGO partners, we are attempting to create the healthiest ecosystem possible to preserve and protect biodiversity on the planet. This network has a global reach touching on all continents, people and species.

The expression of the campaign includes a global music and art competition, weekly podcast with musicians, artists, luminaries, and NGO leaders. In addition, campaign elements include songs, music videos, art and film. It is our intention that the combination of artful expressions will raise awareness and reach people in a way that the facts and information available have to date not been effective in doing.

Mongabay: Can you talk about “Lioness,” the piece of fine art that was created to benefit Mongabay?

Tom Eddington: “Lioness” is an extraordinary original painting by Kimberly Webber. The painting is 8 by 6 feet (244 by 183 centimeters), comprised of rice paper, earth pigments, encaustic, oil on canvas. The scale of the painting allows the viewer to experience a life-size lioness. The painting was created over a year in Kimberly’s classic style using pigments she has collected all over the world, applied to rice paper in tens of shears layers and then mounted on canvas. The color palette of the painting, the lioness, accompanied by a feminine archetype makes this painting exceptional. 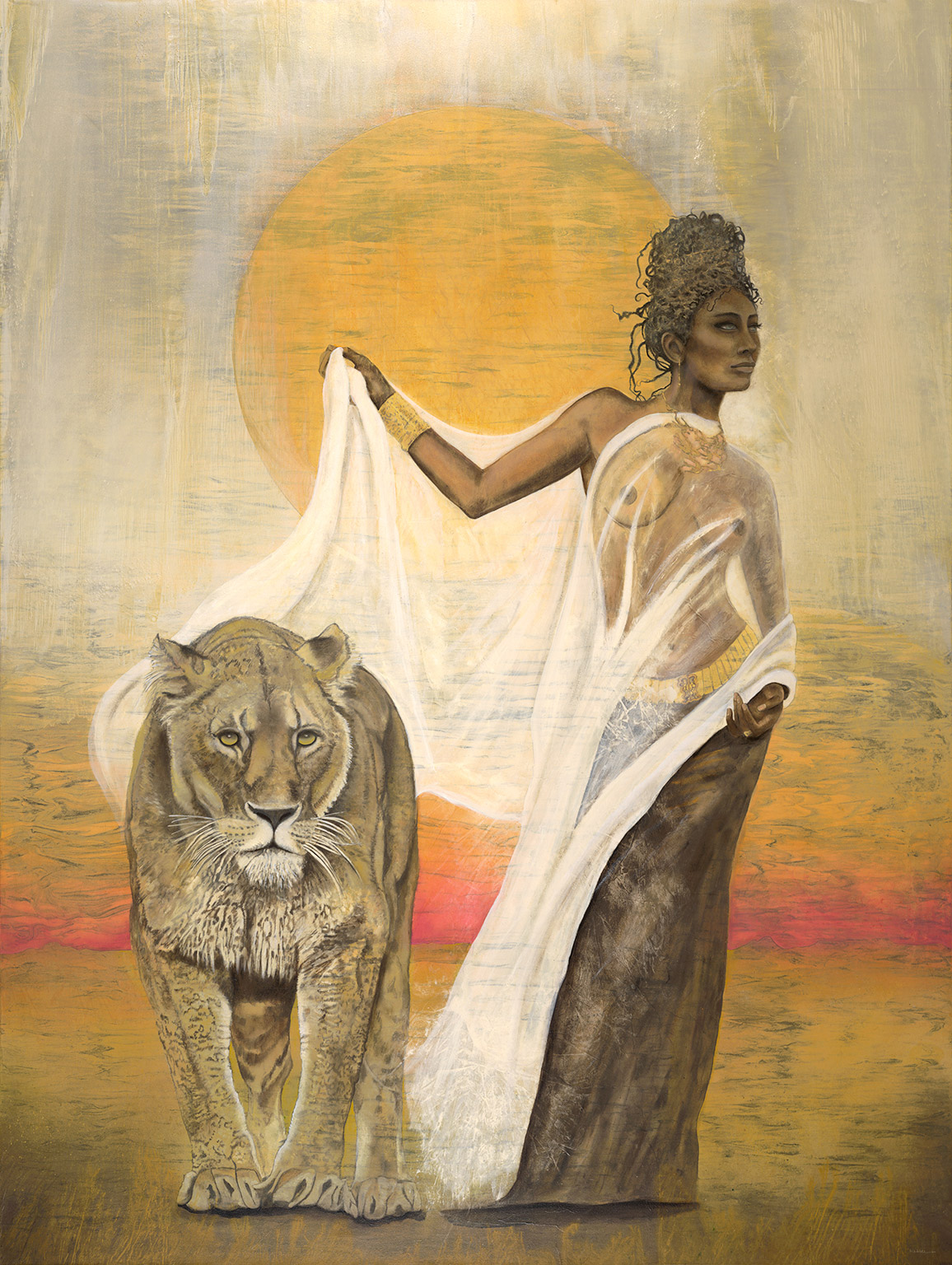 Mongabay: Do you perceive something special about the “creation process” that relates to both art and nature? For example, many people would describe both as being beautiful or awe-inspiring, and furthermore may observe similarities in the creation process of art and what occurs as our natural world evolves through time. Every artist has a “process,” and certainly our natural world’s processes have shaped life as we know it. What’s your gut feeling on why these processes should be venerated?

Tom Eddington: Beauty is the fabric of the universe. Nature — be it the night sky or the landscape we’re surrounded by — is our constant reminder of our connection to beauty. And art can serve as that reminder as well. As a species, we humans hunger for beauty. It feeds our souls. The unfolding of our day constantly reminds us of beauty as the sun passes across the sky as does the changing of the seasons throughout the year. Artists, in their various expressions, remind us as well of our core connection to nature and our very makeup.

The creation process through evolution in nature and the evolution of art throughout time is incredibly special and makes life magical. This magical experience we encounter on a daily basis makes life worth living and brings us joy.

Editor’s note: the names of two celebrity participants were removed from the text of the interview on April 20, 2021.