No one was sure exactly what near-term impact the global pandemic would have the world’s forests in 2020.

Data released today by the University of Maryland provides the first comprehensive quantitative view of what happened in the world’s forests in 2020. 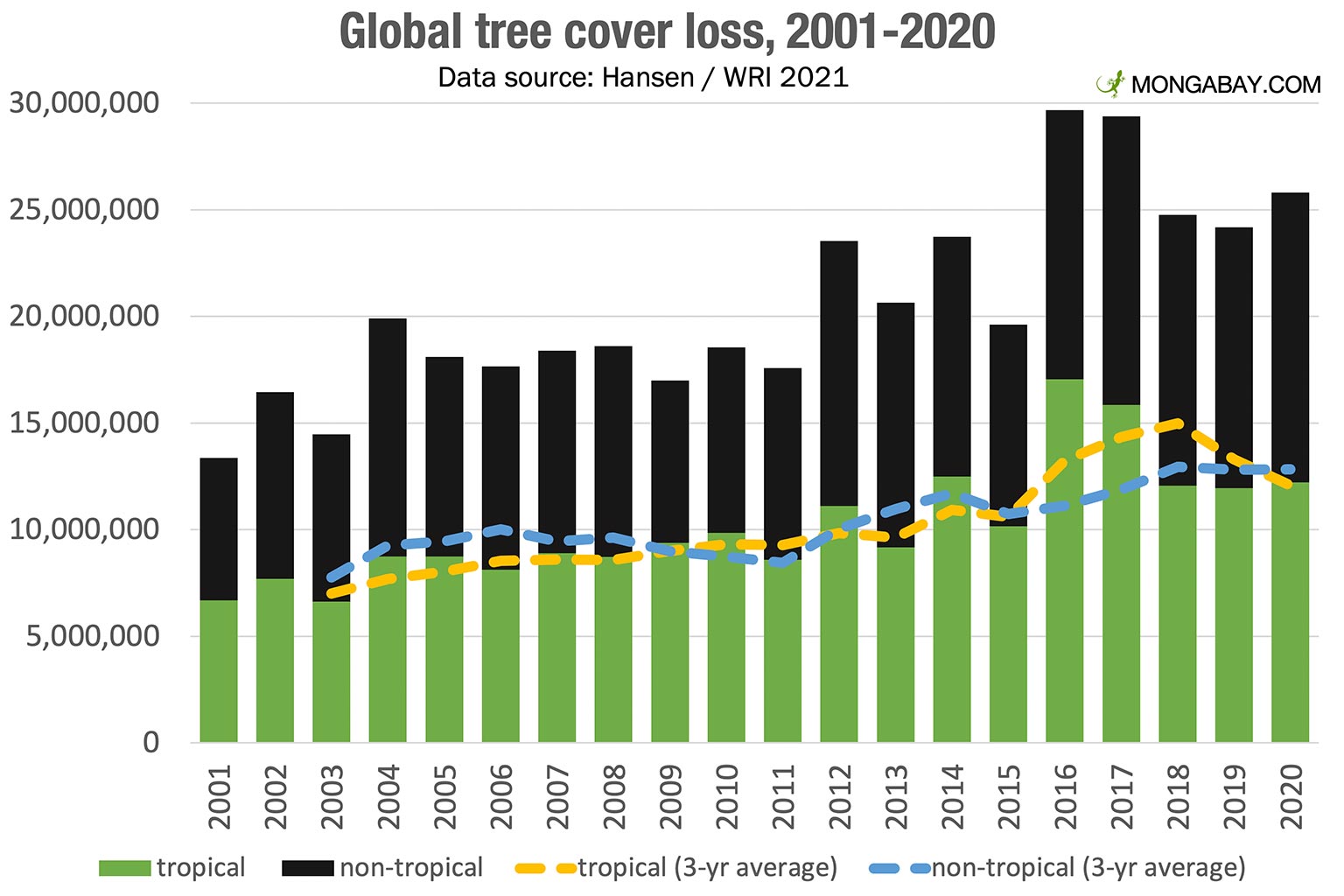 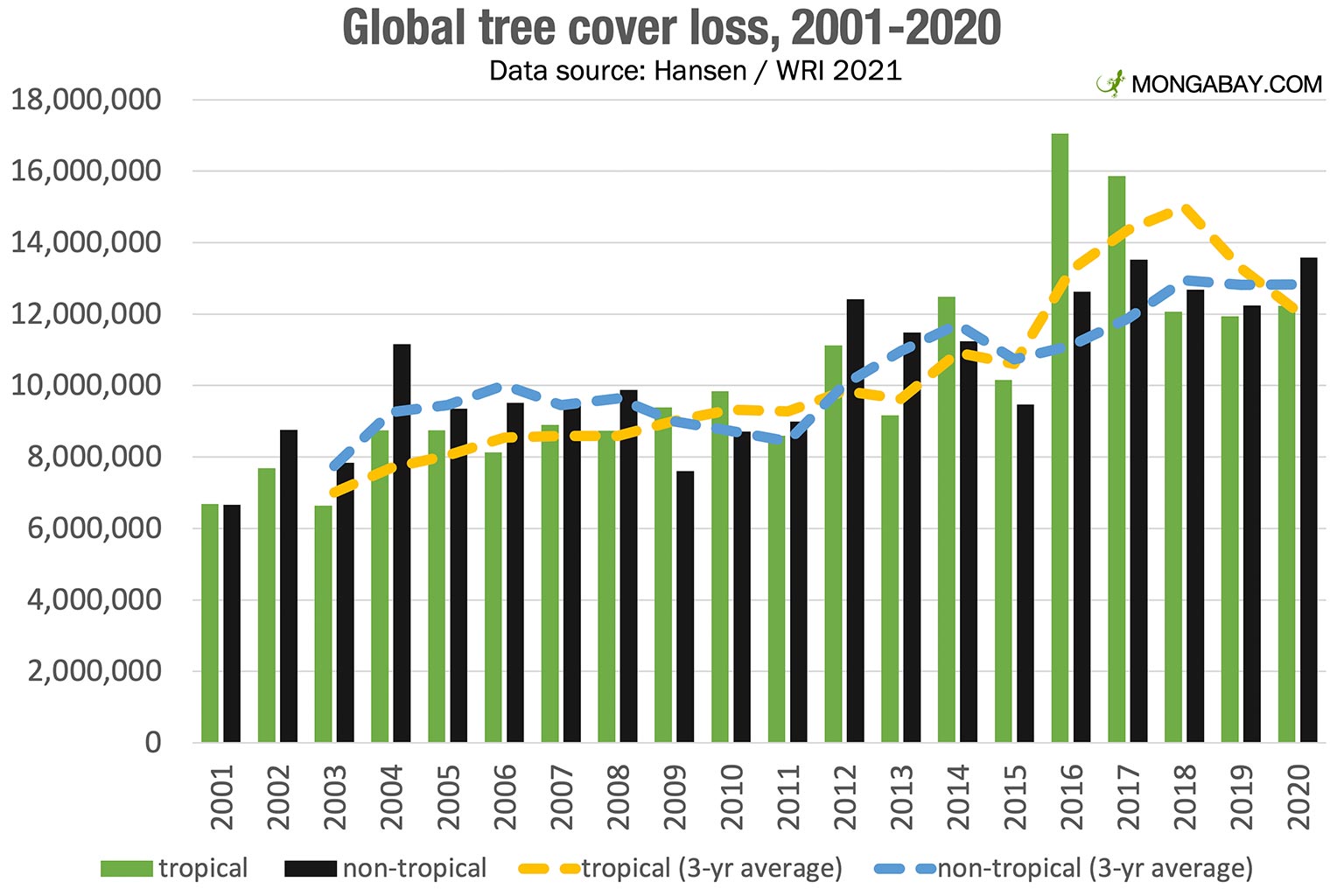 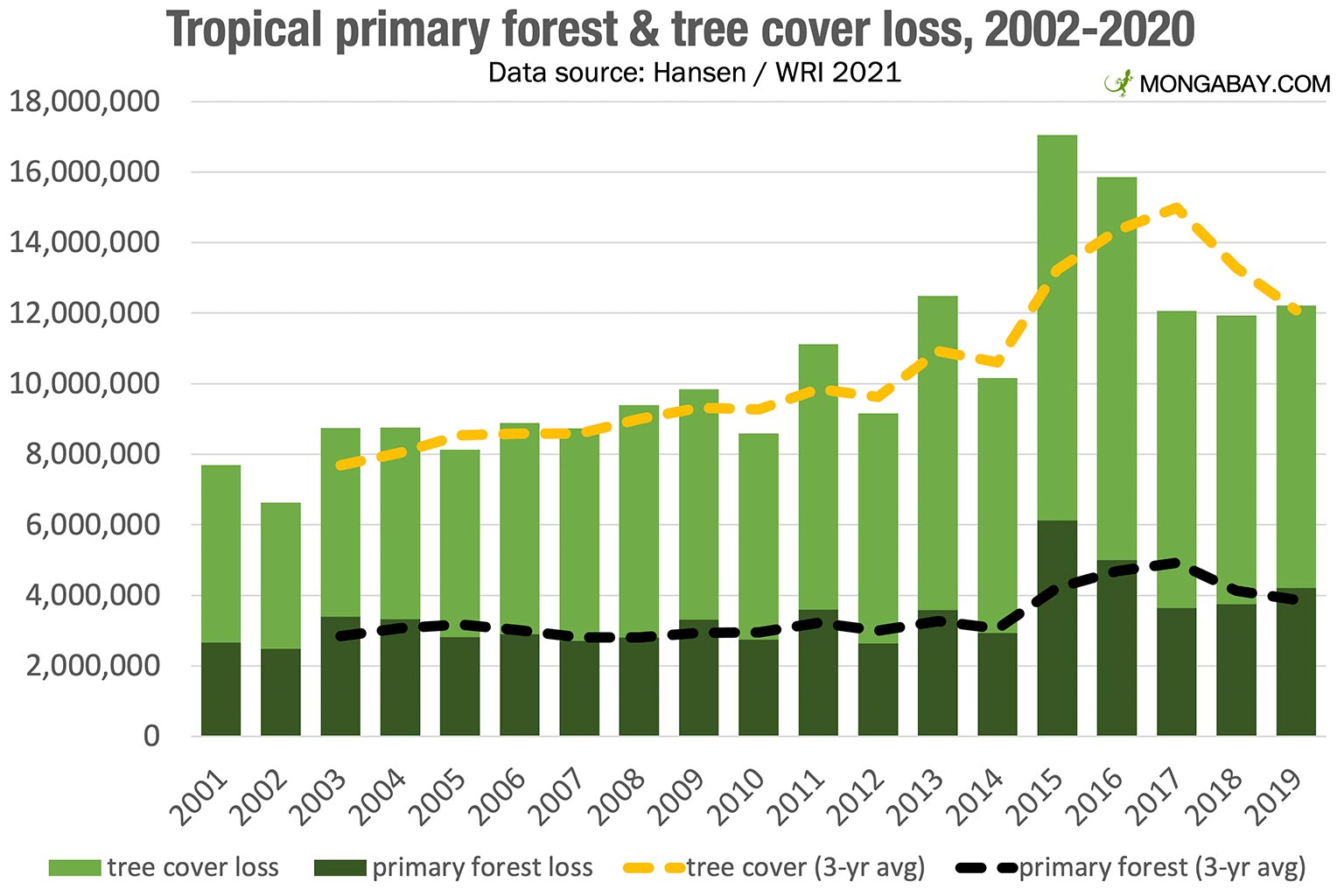 The numbers indicate that forest loss remained persistently high in the immediate aftermath of the pandemic, but “does not show obvious, systemic shifts in forest loss as a result of the COVID-19 pandemic,” according to World Resource Institute (WRI), which has published the data on its Global Forest Watch platform.

The policy response to the pandemic, however, is likely to have a larger impact on the fate of forests, says WRI’s Frances Seymour.

“The COVID-19 pandemic disrupted lives and livelihoods around the world, and the global economy contracted by around 3.5% in 2020. Yet despite the economic downturn, the loss of primary tropical forests ticked up by 12% compared to 2019, continuing an upward trend,” wrote Seymour in a commentary responding to the data. “The more significant impacts of the pandemic on forests are likely yet to come.”

“Unless they see alternatives, governments grappling with constrained fiscal resources and high levels of debt will be tempted to cut the budgets of environmental agencies and license new investment projects that could show up in forest loss data in future years.” 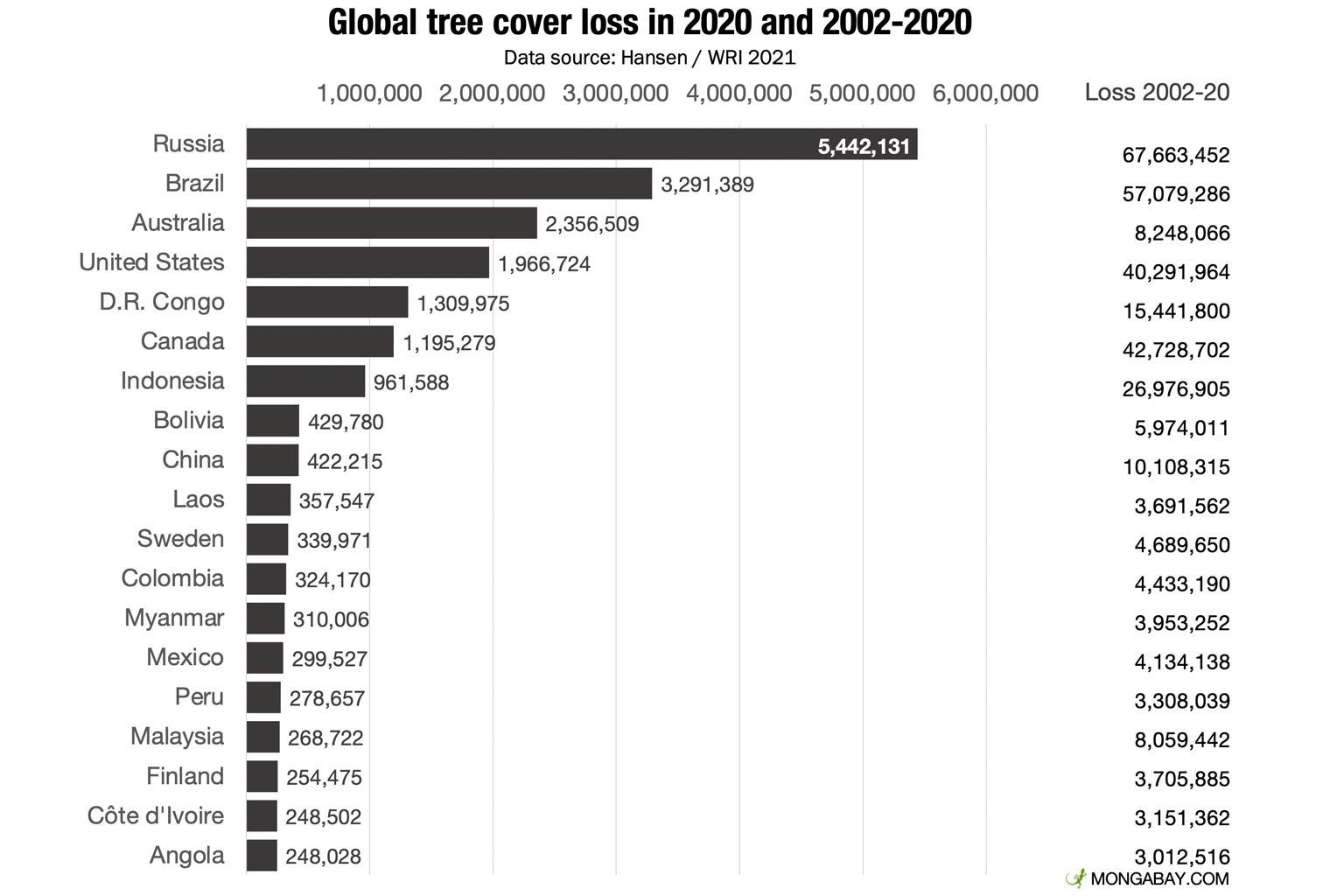 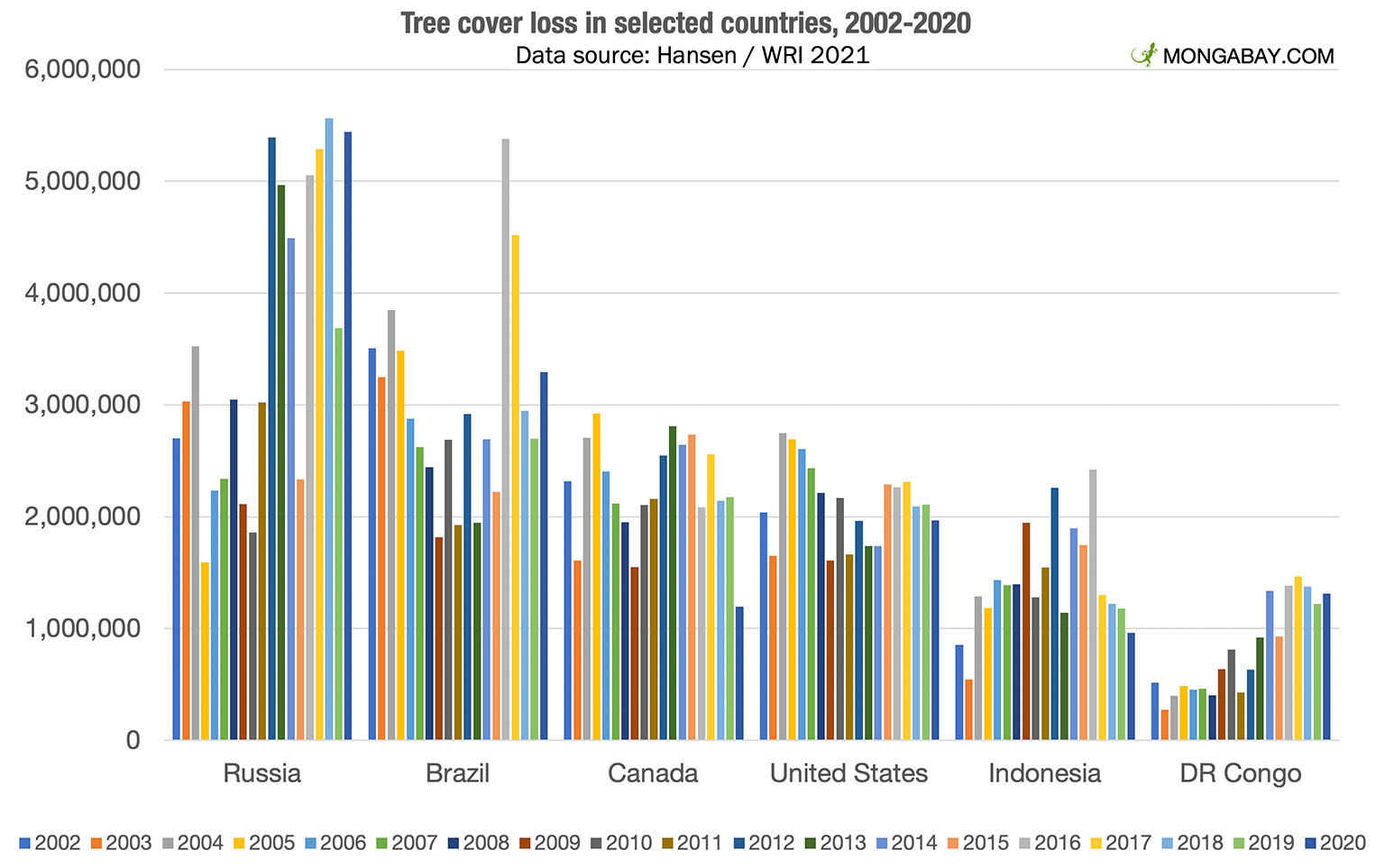 According to the data, the planet lost an area of tree cover larger than the United Kingdom in 2020, including more than 4.2 million hectares of primary tropical forests. Tree cover loss rose in both the tropics and temperate regions, but the rate of increase in loss was greatest in primary tropical forests, led by rising deforestation and incidence of fire in the Amazon, Earth’s largest rainforest.

“The most ominous signal from the 2020 data is the number and variety of instances in which forests themselves suffered in extreme weather events,” wrote Seymour. “In the Amazon, burning now occurs inside the rainforest, rather than just along the recently felled edges.”

Destruction of primary tropical forests, the world’s most biologically diverse ecosystems, released 2.64 billion tons of carbon, an amount equivalent to the annual emissions of 570 million cars, which is “more than double the number of cars on the road in the United States”, according to an analysis published by WRI’s Mikaela Weisse and Elizabeth Goldman. 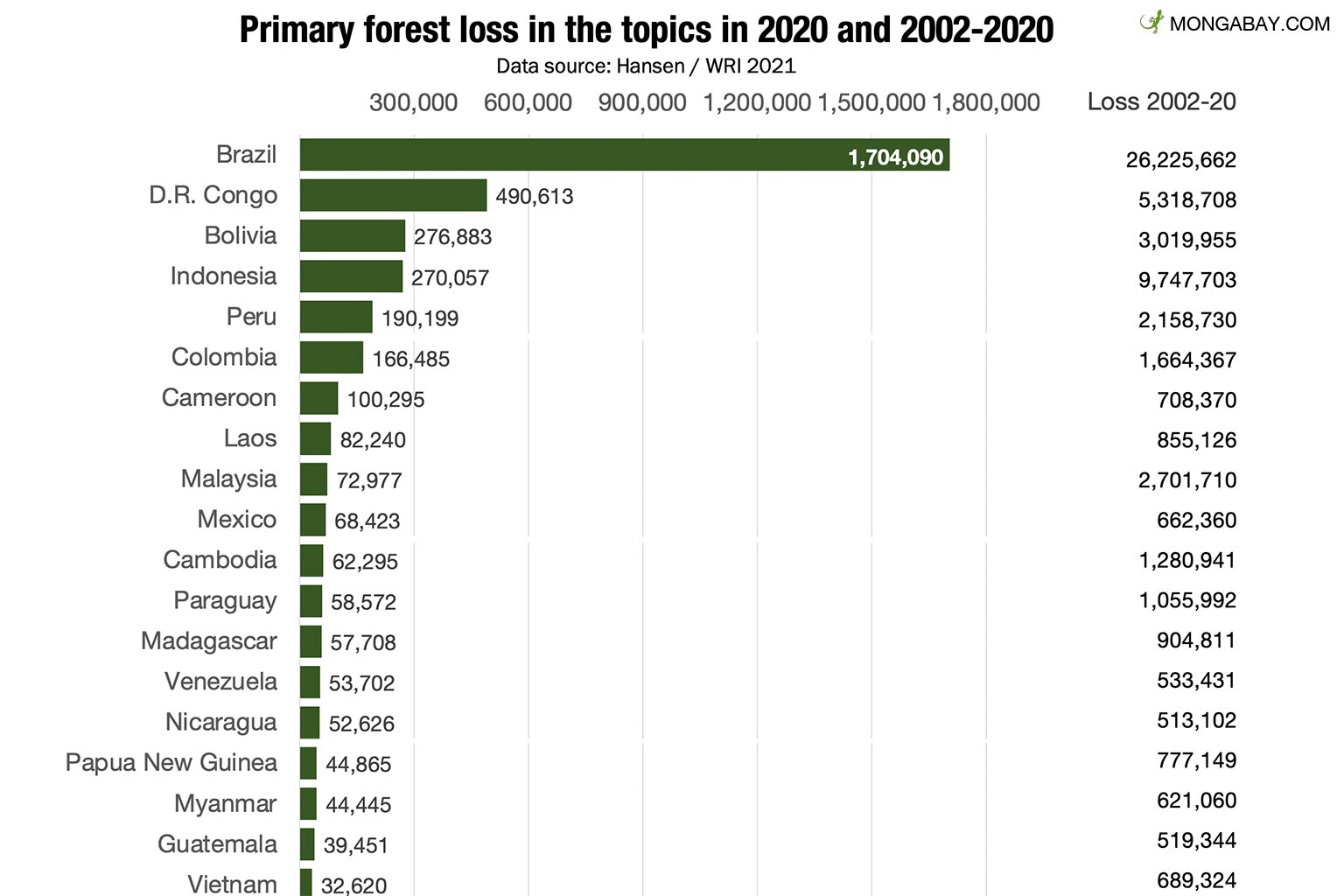 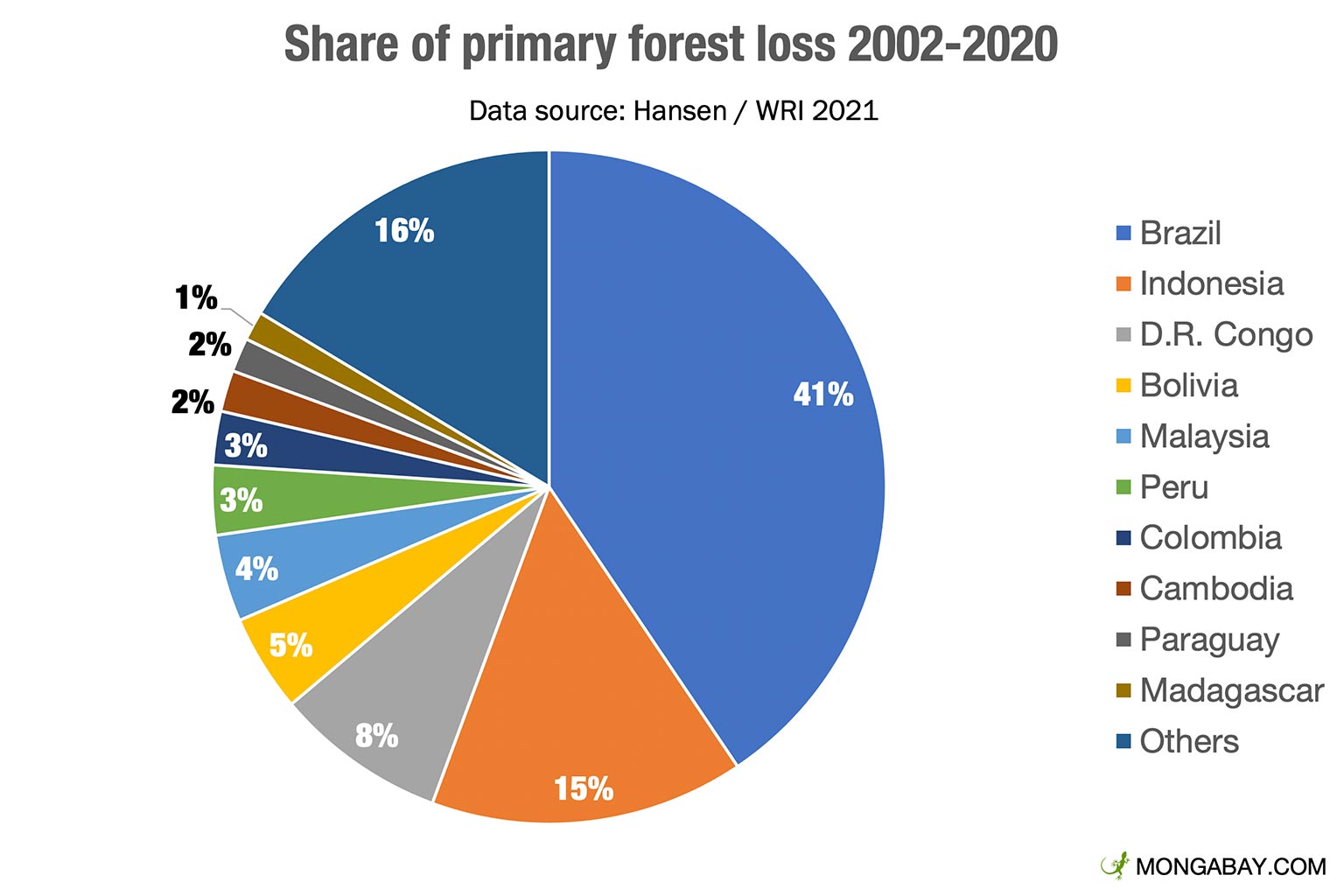 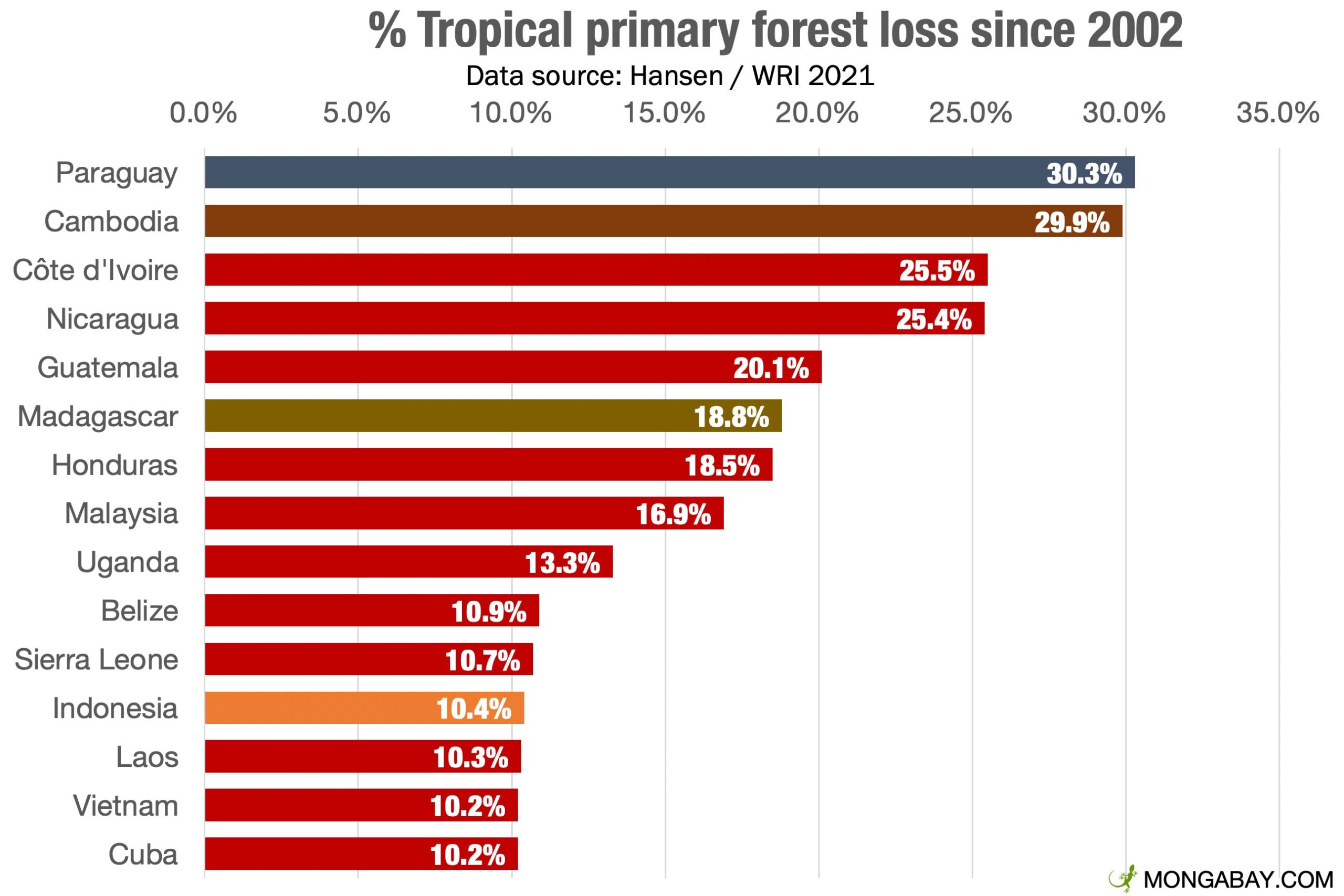 Deforestation rates are falling in parts of Southeast Asia

But one part of the world experienced a sharp contraction in tropical primary forest loss: Indonesia, Malaysia, and Papua New Guinea (PNG).

For the first time since the data set began in 2002, Indonesia dropped out of the top three countries in terms of tropical primary forest loss. It ranked fourth with 270,00 hectares of loss, down 17% from 2019. Malaysia’s primary forest loss fell 39% and PNG’s declined 22%. That decline was not mirrored in nearby Mekong countries, which, as a whole, experienced a modest rise in primary forest loss. 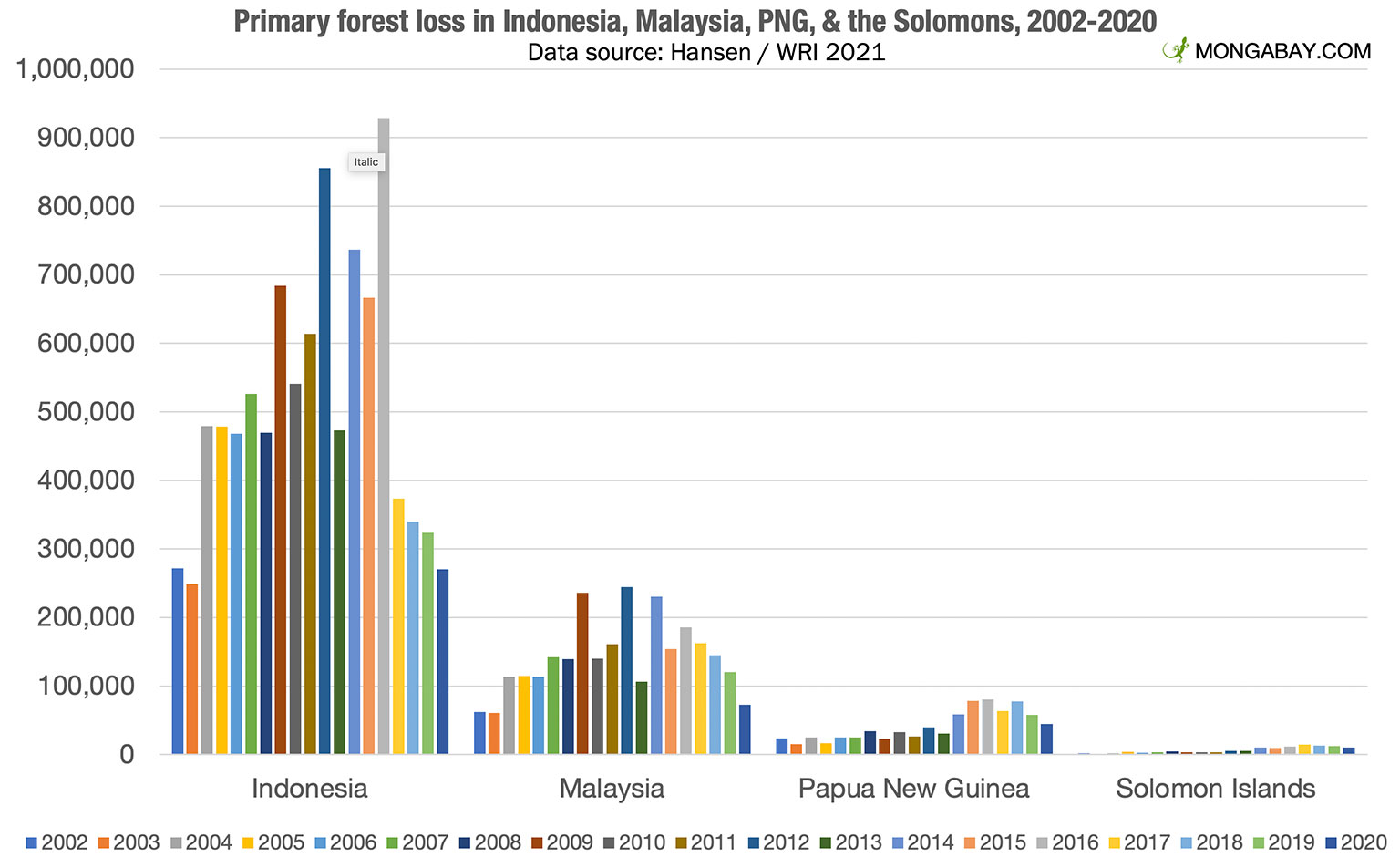 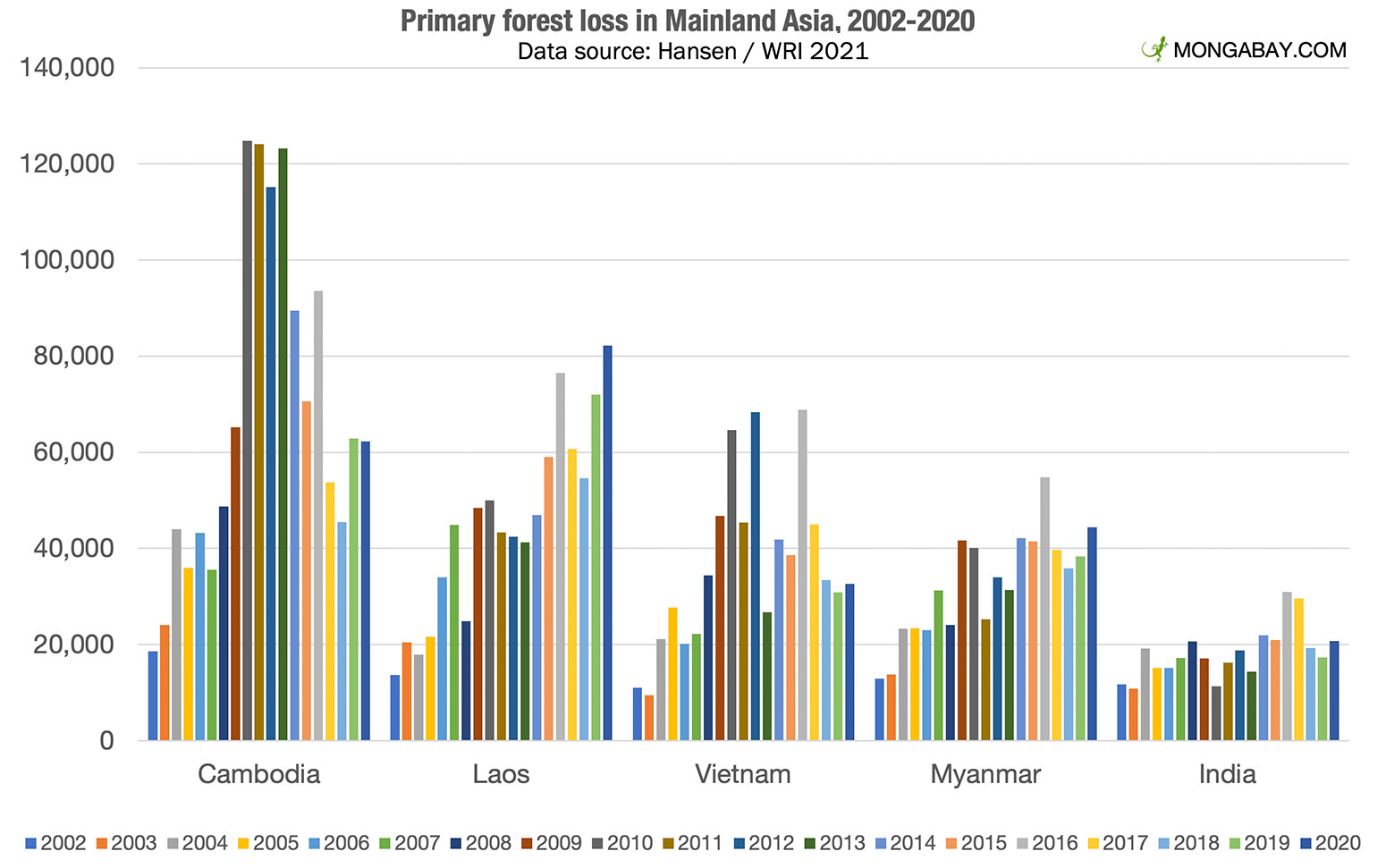 WRI attributes the drop in primary forest loss in Indonesia and Malaysia — which has now declined four consecutive years — to a combination of government initiatives and private sector initiatives. In Indonesia, this includes moratoriums on new plantation licenses in some forest areas, improved forest and fire monitoring, better peatlands protection and restoration, and more widespread adoption of zero deforestation commitments by commodity traders and buyers. WRI cites a cap on plantation development and increased law enforcement in Malaysia as factors in its decreasing rate of loss.

“What’s significant about the Indonesia story is that it’s been driven by a combination of domestic self-interest — avoiding the severe public health and other costs of fires — and international market and financial incentives,” wrote WRI’s Seymour. “Perhaps it’s not a coincidence that one of the provinces that experienced a steep drop in tree cover loss in 2020 was East Kalimantan, which just concluded an agreement with the World Bank for up to $110 million in REDD+ finance if the province is successful in bringing down forest-based emissions. The province is also host to one of most mature multisector, multistakeholder initiatives in the country seeking to transition to more sustainable land use.”

But measures Indonesia took in 2020 in response to the impacts of the pandemic have raised concerns that forest loss in the country could be poised to rise again. An economic stimulus law, passed in October, relaxed several environmental regulations governing plantation and mining development, while a proposed food estate program and a new biofuels mandate, which creates a new source of demand for palm oil that doesn’t fall under corporate zero deforestation policies, could drive large-scale conversion of forests. There’s also a risk that recent progress in protecting forests could be reversed when the region experiences another major drought like that which occurred in 2015.

“These are fragile gains,” wrote Seymour. “In the coming months, Indonesia will face rising palm oil prices and pressure to approve forest-risk investments under a recent job creation law, even as a three-year moratorium on licensing of new oil palm plantations is set to expire this year. For Indonesia to maintain its success and other countries to follow its lead, the voices of domestic constituencies for forest protection need to be amplified. Space must be maintained for independent monitoring and advocacy by civil society.” 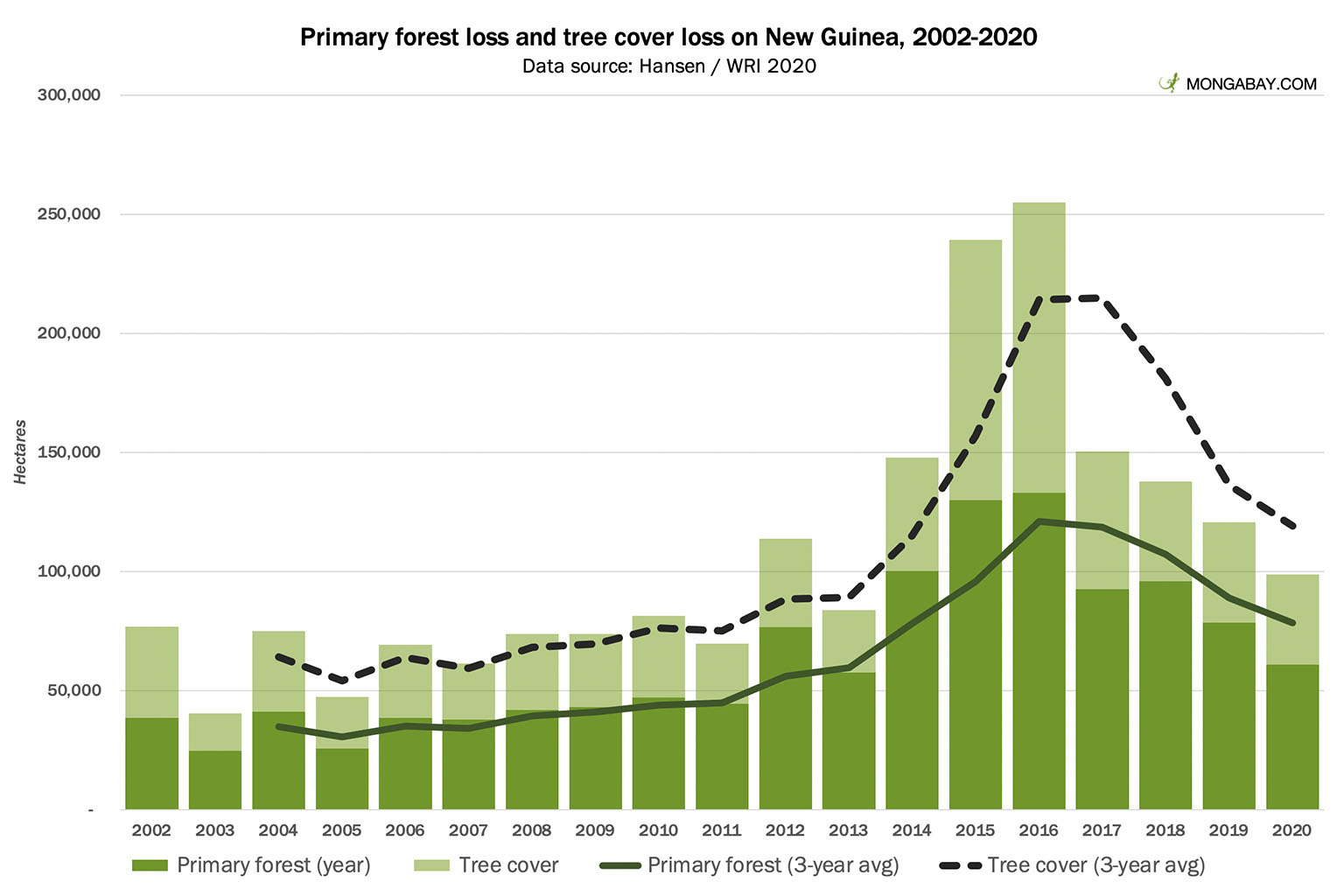 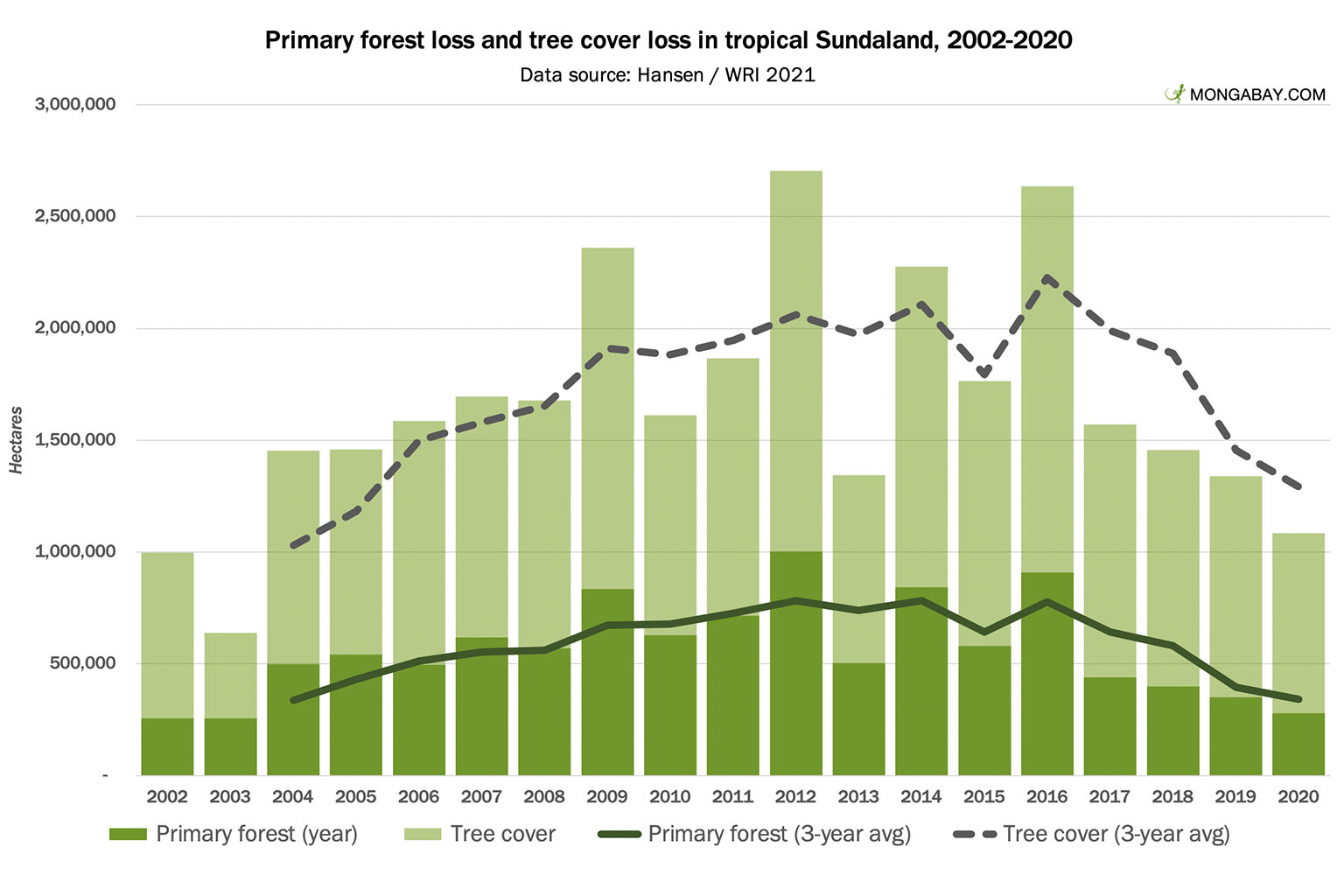 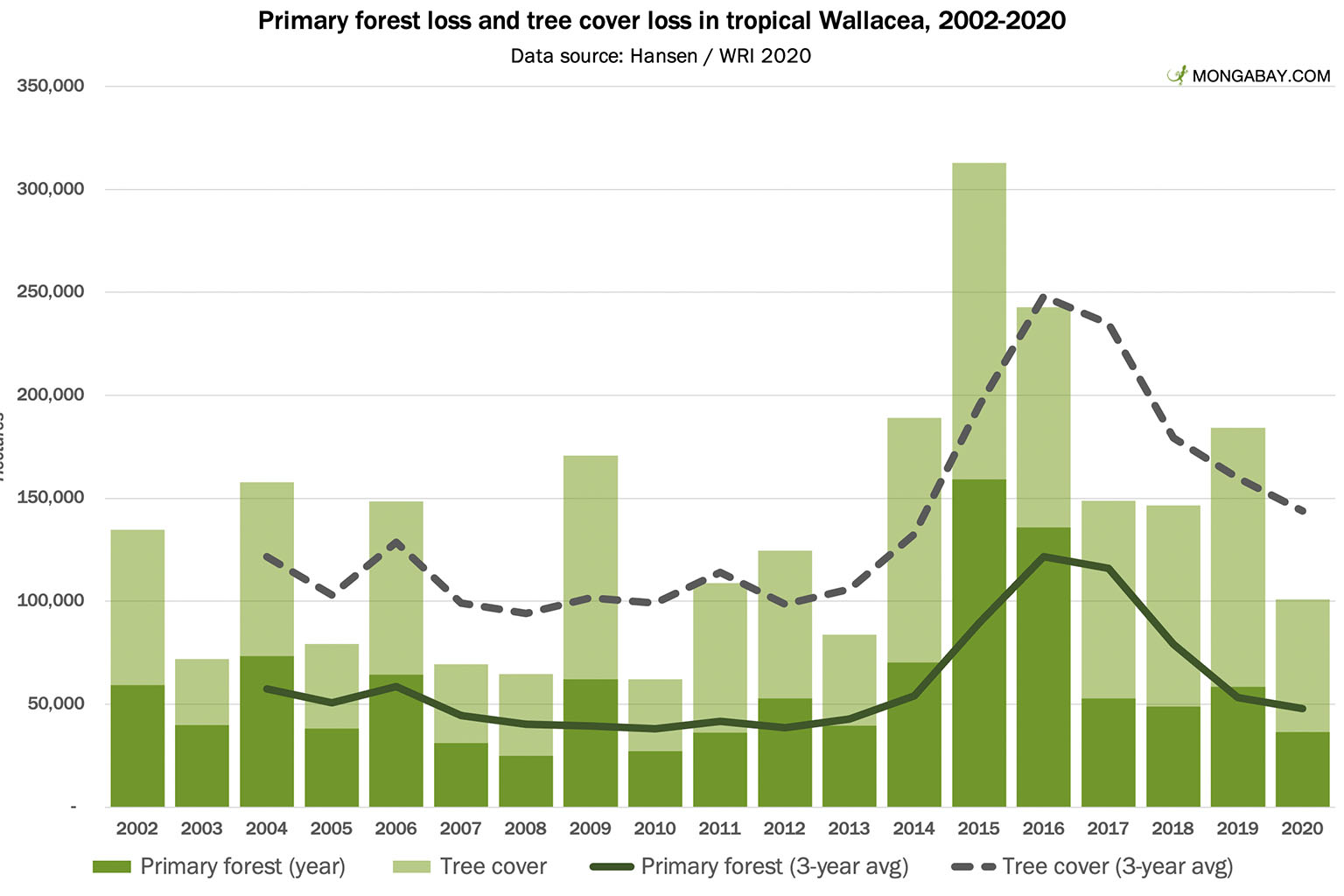 The Brazilian Amazon also experienced an increase in the number of forest fires in 2020 despite the federal government banning burning and sending in the army to control deforestation. The rise in fires and changing conditions in the Amazon has raised concerns among scientists that parts of the rainforest may be drying out, setting in motion a transition toward a dry forest or savanna ecosystem like that of the adjacent Cerrado and Chaco forests.

“As in the Amazon, most of the 2020 fires in the Pantanal were started by people to manage land, but burned out of control in 2020 due to levels of drought not seen since the 1970s,” wrote WRI’s Weisse and Goldman. “Deforestation in other parts of South America may play a role in drying out the Pantanal, and climate change is likely to make extreme events happen more regularly.” 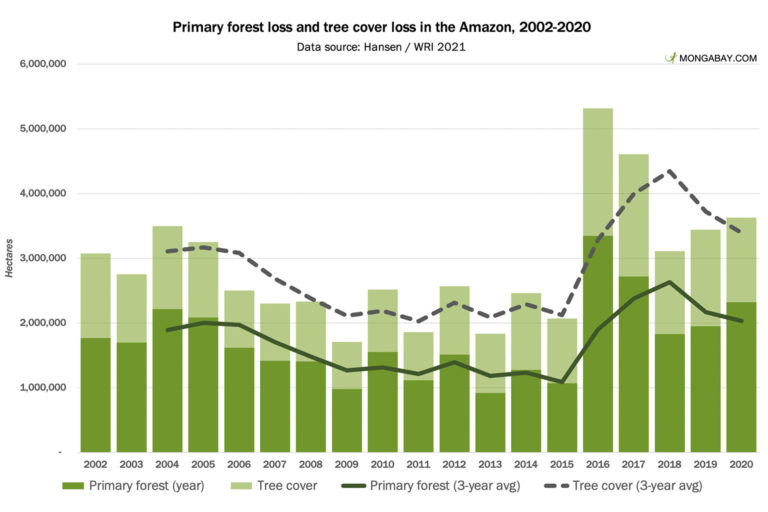 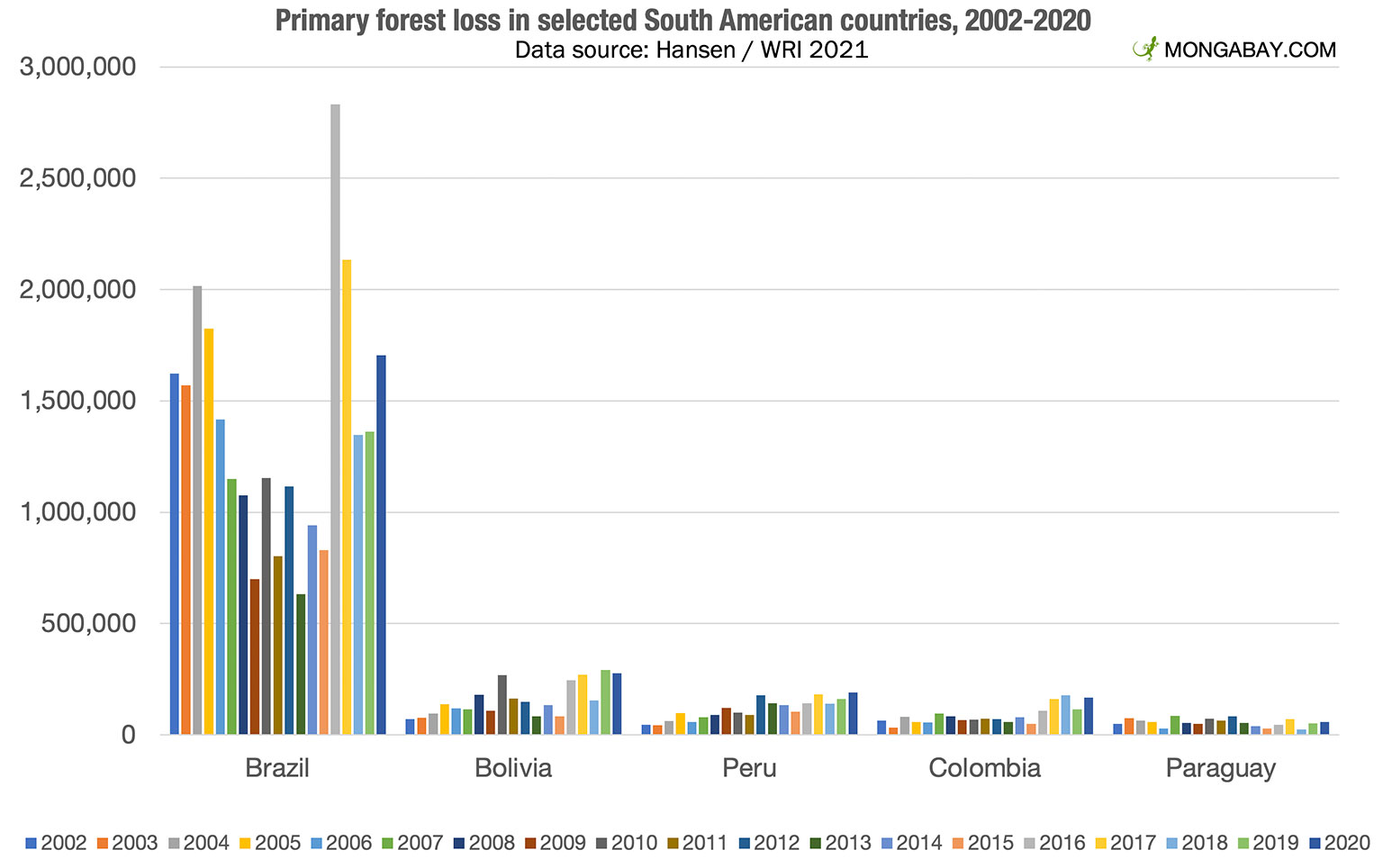 Colombia’s primary forest loss surged by 45% over 2019, an increase that Nicola Clerici, an ecologist at Universidad del Rosario, and Rodrigo Botero, director of the NGO Fundación para la Conservación y el Desarrollo Sostenible, attribute to rising lawlessness in areas where the government has pulled back resources to focus on dealing with the pandemic. Beyond increased deforestation for cattle and cocoa, Clerici told Mongabay that park authorities, local and Indigenous communities, and environmental defenders have experienced rising threats and violence. Botero said that some companies appear to be positioning themselves to secure legal rights to land where they’ve recently encroached.

“The large-scale informal land market continues to advance,” Botero told Mongabay. “Large industrial conglomerates are entering legally restricted areas … [with] the expectation that the legal restrictions in the area will change.”

With an 68% rise, the Ecuadorian Amazon experienced the sharpest increase in primary forest loss in percentage terms among Amazon countries. Bolier Torres,  a researcher at the Universidad Regional Amazónica IKIAM, thought that Ecuador’s economic crisis, which predated COVID-19 but was worsened by the pandemic, may be driving more people from cities into rural areas where they clear forests.

Outside the Amazon in South America’s dry forests, Argentina’s rise in tree cover loss in 2020 was more than offset by a significant drop in Paraguay. Combined, the countries accounted for more 440,00 ha of tree cover loss in 2020, and over 6 million ha of loss since 2010. Much of the deforestation in the two countries is driven by agribusiness and cattle ranching. 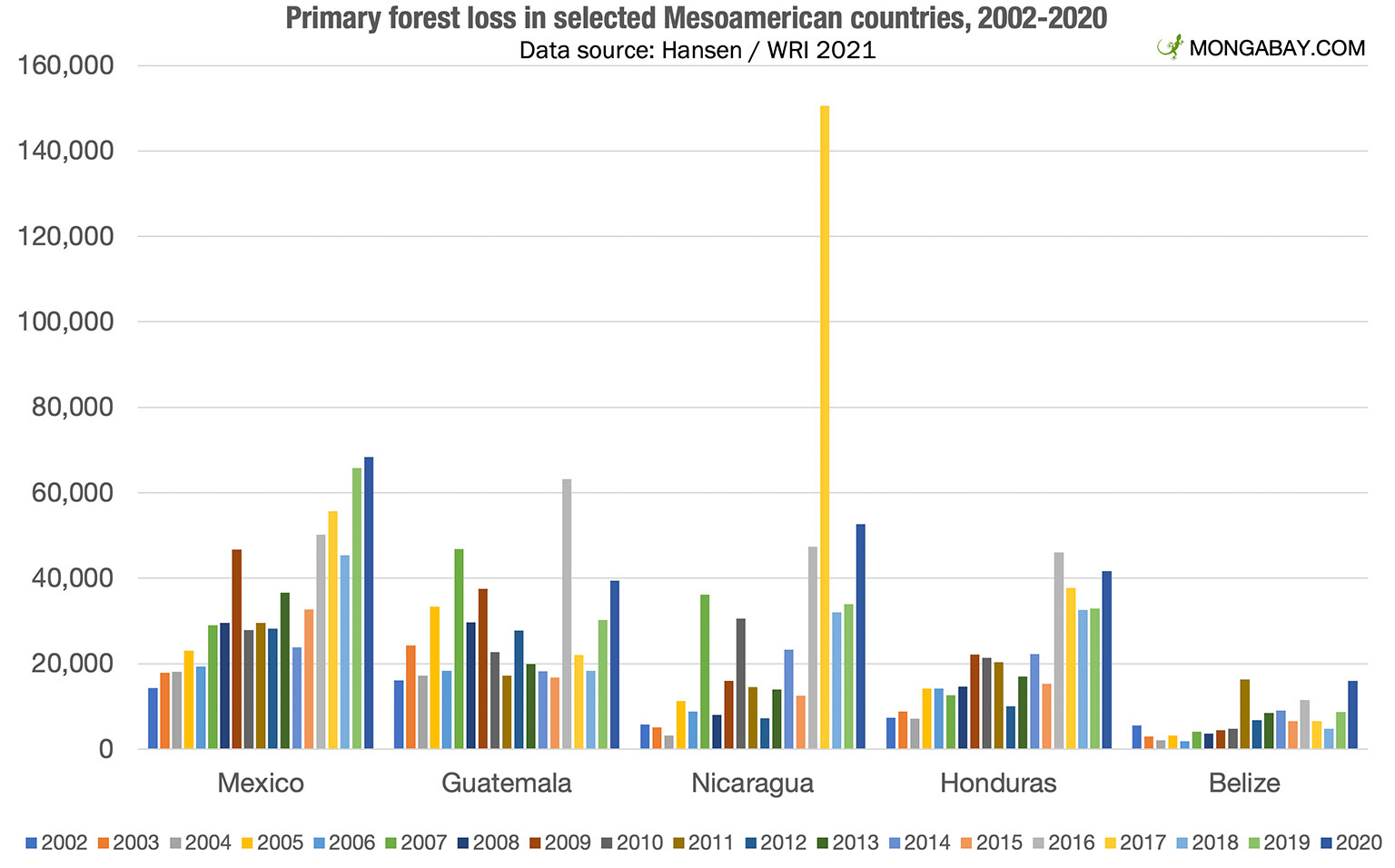 Elsewhere in Latin America, Mesoamerica experienced a 27% increase in primary tropical forest loss between 2019 and 2020. Forest loss in the region was led by Nicaragua, which has lost 15% of its primary forest cover since 2017, the highest proportion of any major forest country. Belize’s deforestation rate nearly doubled in 2020, contributing to the region’s rise.

Primary forest loss in the Congo Basin, which is home to Earth’s second largest tropical rainforest, surpassed 600,000 hectares for the third time in the past five years, rising 9% over 2019. The sharpest increase in primary forest loss occurred in Cameroon, which nearly doubled in 2020. WRI attributed the rise in Cameroon to expanding small-scale shifting agriculture, which is typically the dominant driver of deforestation in the region, though the full understanding of the dynamics remain cloudy.

“While it is difficult to pinpoint what is driving this agricultural expansion, it could be related to urban-rural migration related to pandemic job losses and increases in commodity prices, especially cocoa and oil palm,” wrote Weisse and Goldman. “The Democratic Republic of the Congo (DRC) lost 490,000 hectares of primary forest in 2020, the second-highest amount of any country after Brazil. As in years past, the majority of forest loss continues to be caused by the expansion of small-scale shifting agriculture and wood energy demands, including charcoal production.” 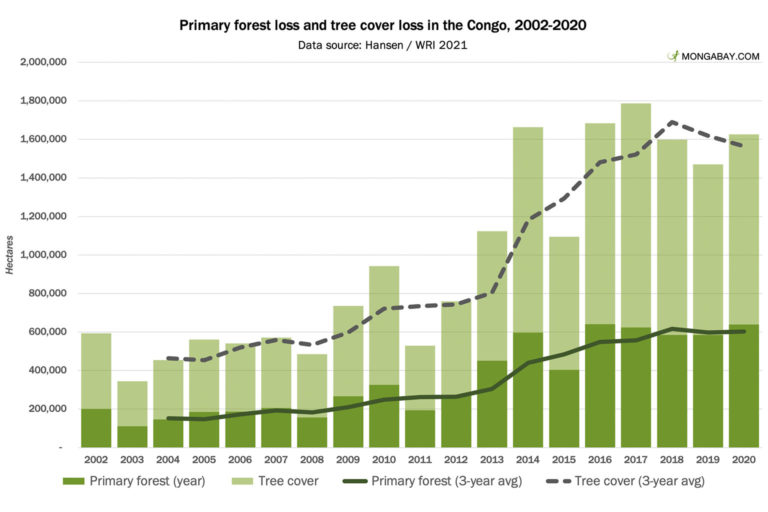 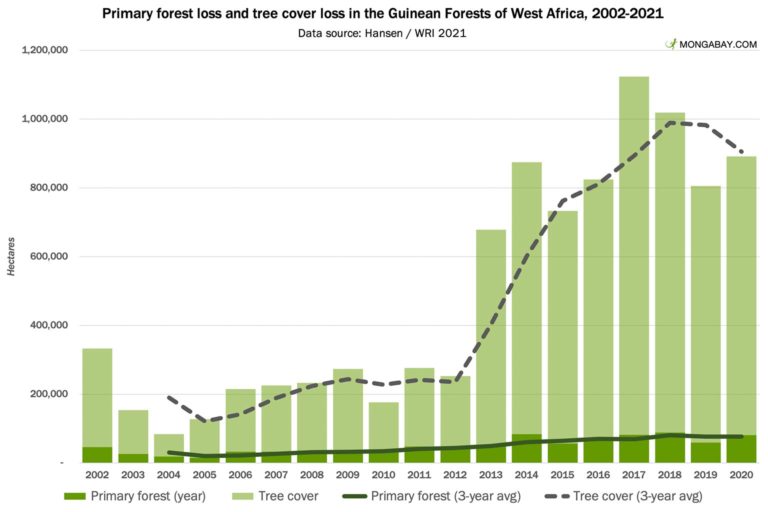 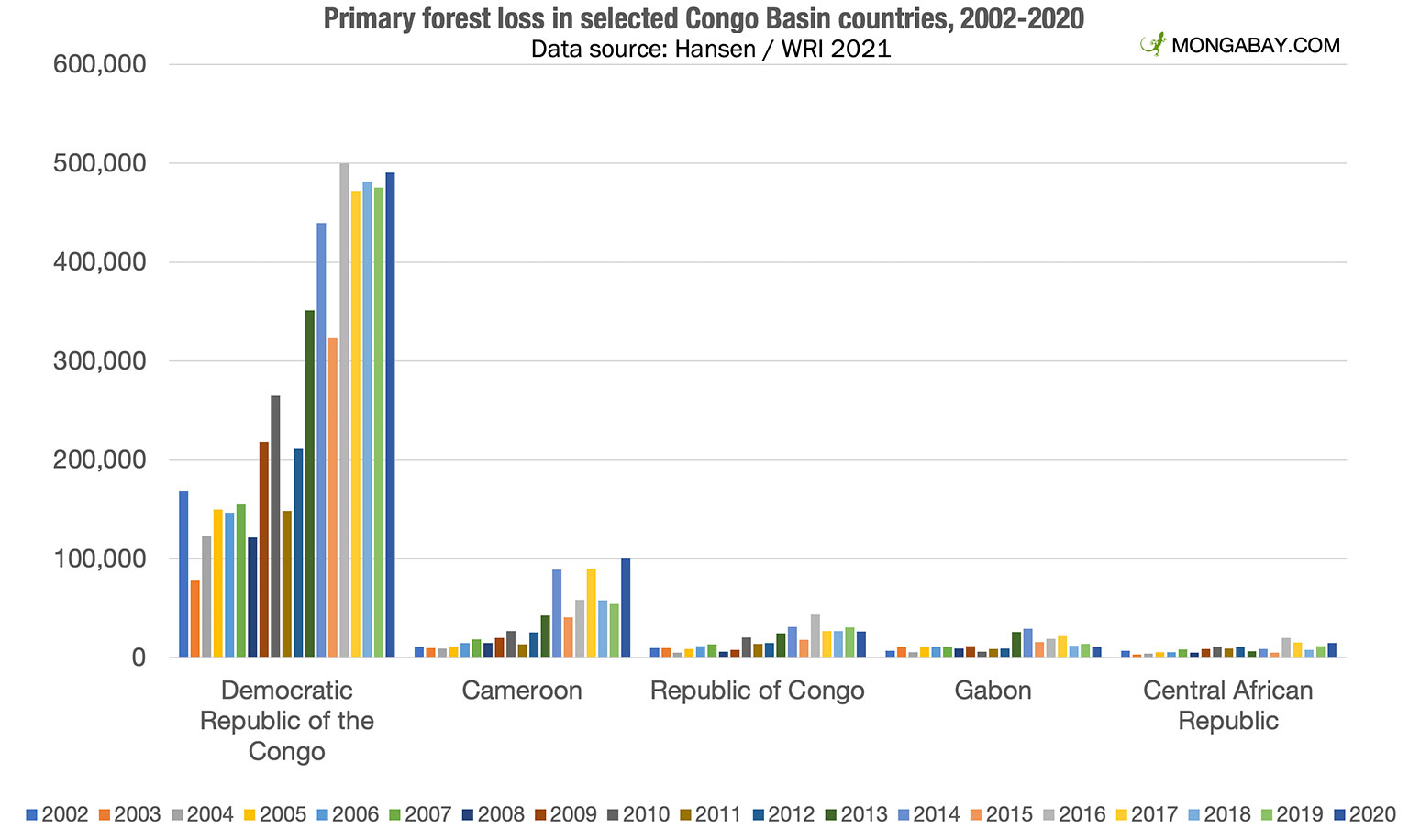 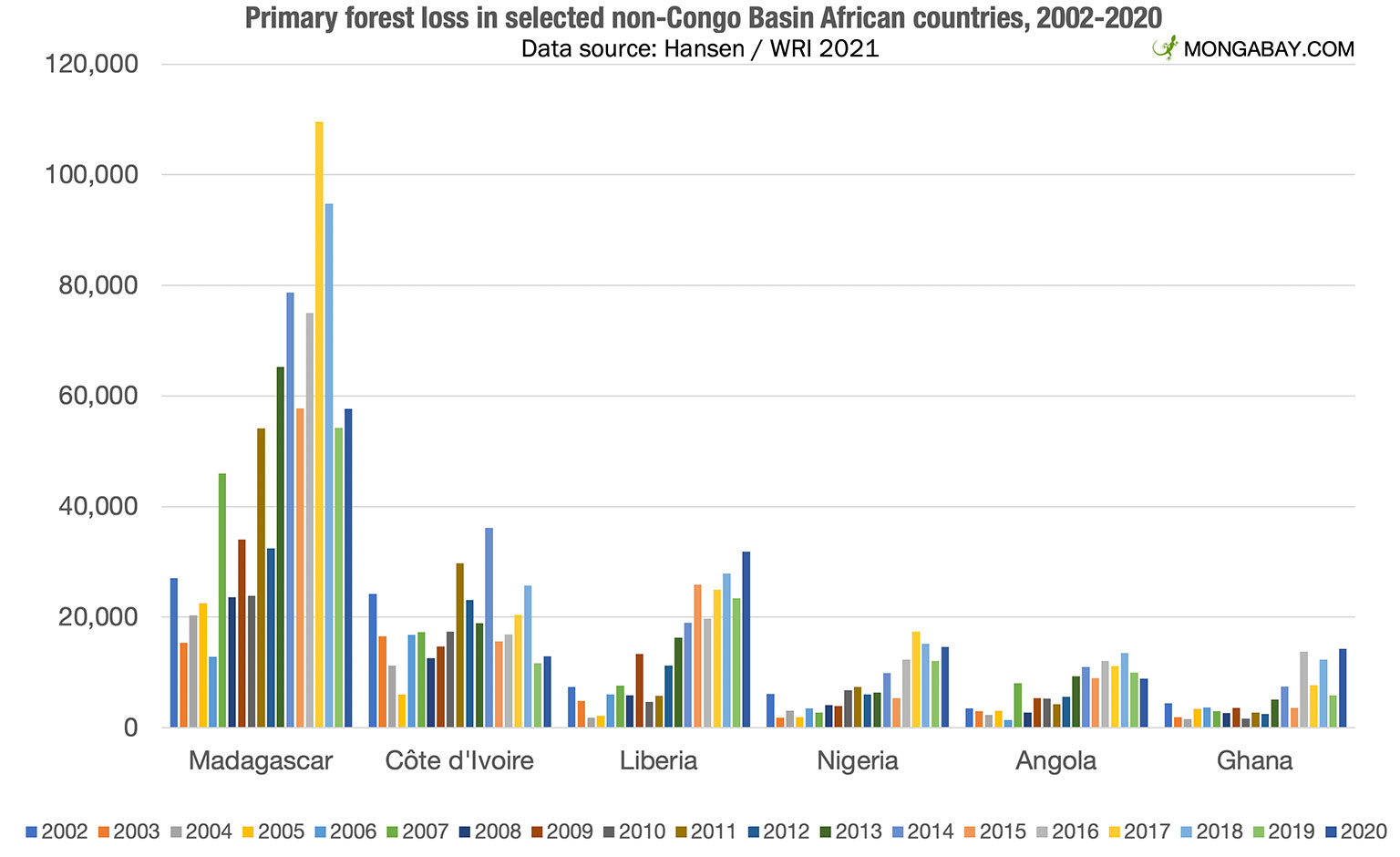 Equatorial Guinea, Gabon, and Republic of Congo all experienced a drop in primary forest loss in 2020.

Tree cover loss in Russia and Canada — which respectively rank first and third in terms of overall tree cover — went in opposite directions in 2020. Besieged by high temperatures and large fires in Siberia and the Russian Far East, Russia’s tree cover loss rose 1.76 million ha to 5.44 million ha in 2020, an increase of 48% over 2019. Canada, however, experienced a 45% drop in tree cover loss in 2020, falling to 1.2 million ha, the lowest in at least 20 years. WRI said Canada’s decline may be explained by “lack of fires, including cooler, wetter weather and restrictions on fires and off-road vehicles during COVID-19 lockdowns.”

Tree cover loss in the United States declined 7% to 1.97 million ha, while Australia’s increased 42% due largely to fires that swept across the eastern parts of the country from mid-2019 to early 2020. WRI noted a nine-fold increase in 2020 relative to 2018.

Central Europe experienced extensive tree cover loss in 2020, including “three-fold increases in Germany and Czech Republic compared to 2018,” according to WRI.

“The spike is in large part due to damage from bark beetles, which have caused particular damage to vulnerable trees as a result of hot and dry weather associated with climate change,” wrote WRI’s Weisse and Goldman.

Taken in aggregate, the new data shows that forests around the world continue to decline, with the highest rates of loss occurring in the most pristine ecosystems that account for a disproportionate share of biodiversity, carbon sequestration, and Indigenous communities. The data also show the extent to which our consumption patterns are driving deforestation and the rising impact that climate change is having on forests via drought, warmer temperatures, and stronger storms. 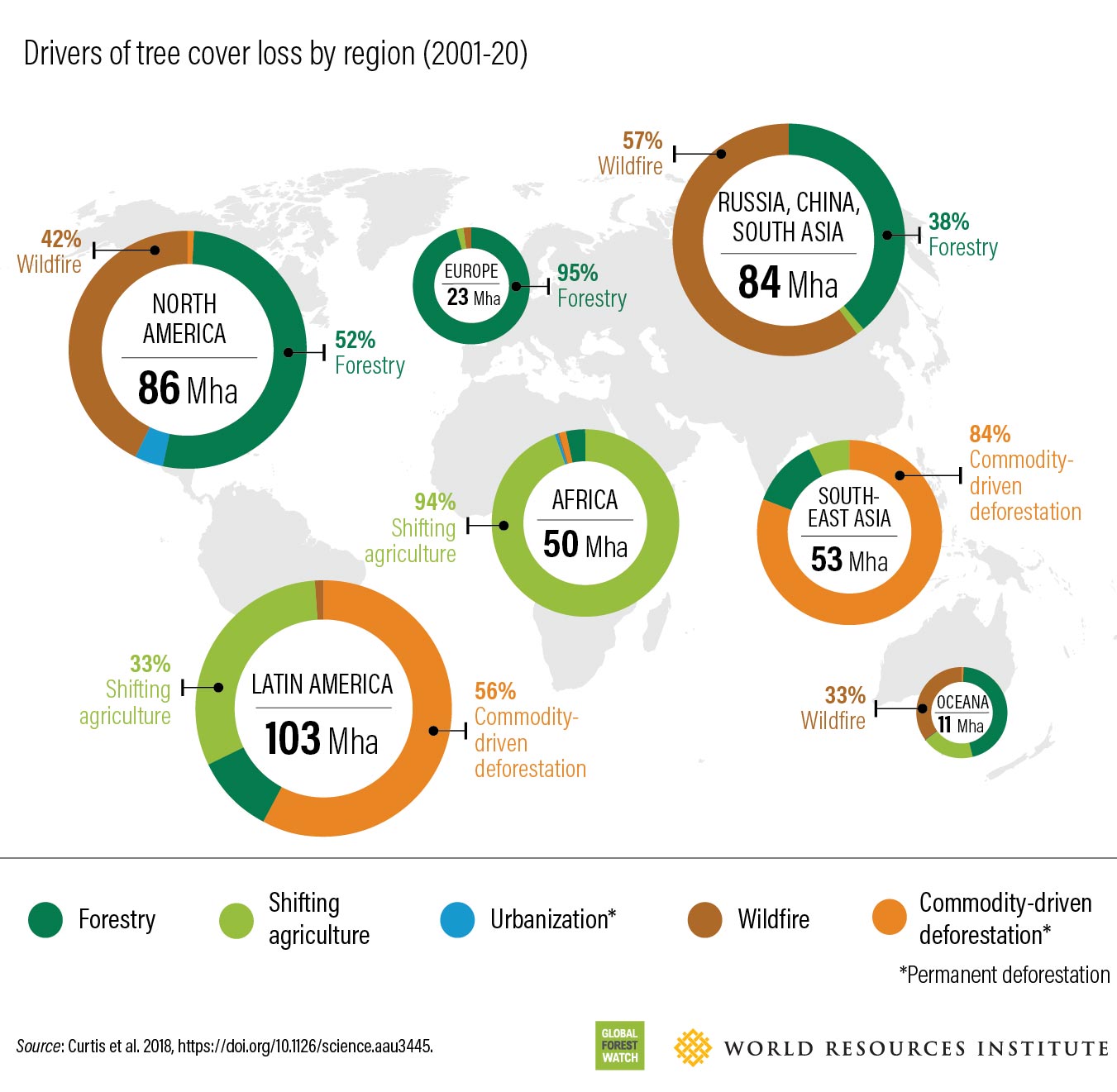 “This loss represents a crisis for climate stability and biodiversity conservation, as well as a humanitarian disaster and lost economic opportunity,” wrote WRI’s Seymour. “This analysis now covering 20 years of data shows all that’s been lost — as well as the interventions that work.”

“Although the overall trends are distressing, what’s happened in a few individual countries inspires confidence that the drivers of deforestation can be defeated.”