Newly described chameleon from Madagascar may be world’s smallest reptile

by Malavika Vyawahare on 3 February 2021

Frank Glaw is no stranger to discovery. The German herpetologist has helped describe scores of new species from Madagascar, but the latest one is special: Brookesia nana is arguably the world’s tiniest chameleon and possibly the smallest reptile on Earth.

Measuring just shy of 14 millimeters (0.55 inches), B. nana can perch cozily on an aspirin tablet. Like many Lilliputian chameleons, it has catchy swivelly eyes and a sizeable hemipenis. Two specimens, a male and female, were collected in 2012 by Angeluc Razafimanantsoa, who works as a tourist guide at Montagne d’Ambre National Park in northern Madagascar and assists scientific expeditions.

The female was distinctly bigger at 19 mm (0.75 in), which scientists believe is one reason why the males feature an outsized reproductive organ; it’s a better fit.

For nine years, Brookesia micra, a cousin of B. nana described in 2012, clung to the title of tiniest chameleon. B. nana is smaller than B. micra in body size, measured from snout to cloacal opening at the base of the tail. But it sports a longer tail. Differences in how size is determined make it complicated to definitively claim that a species is the planet’s littlest.

A branch of Brookesia chameleons exhibits extreme miniaturization, leaving scientists scouring dictionaries for synonyms for small. There is already a Brookesia minima, so the researchers settled on nana, derived from the Latin word for dwarf. Glaw and his colleagues published their findings in a recent paper in Scientific Reports.

Dwarf geckos from the Caribbean are the Malagasy chameleons’ closest competitors for the smallest reptile crown. Small islands like those in the Caribbean often give rise to diminutive creatures, but why this happens is still a mystery.

“There are loads of processes that can actually drive miniaturisation,” Mark D. Scherz, a postdoctoral researcher at the University of Potsdam in Germany and a co-author of the paper, said. “It might, for example, just be evolutionary drift, but it could also be driven by resource availability.”

The isolation and freedom from traditional restraints on body mass, like availability of food or presence of predators, could be one explanation for unusual sizes.  “We are only slowly starting to piece together the puzzle to figure this out,” Scherz said.

Madagascar, a landmass of continental proportions, has long surprised scientists in the array of miniature species it hosts. The island broke off from Africa 150 million years ago and from the Indian subcontinent 88 million years ago, and remains a veritable playground for evolution. 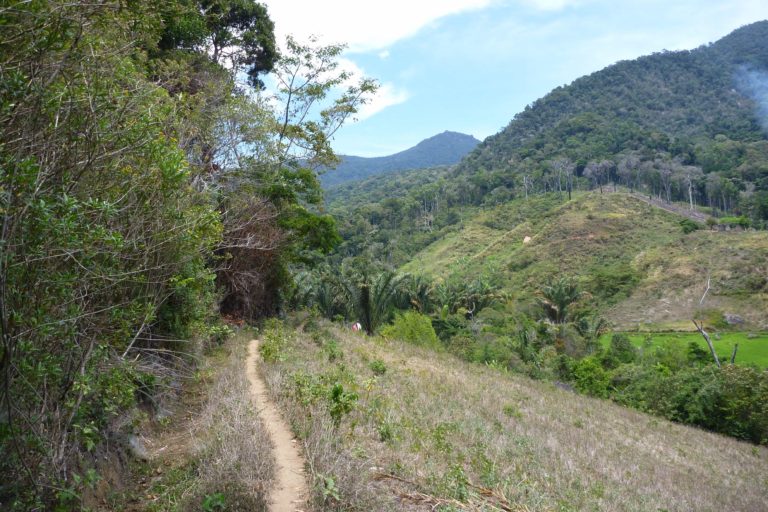 Most of its chameleons, including B. nana, are found nowhere else in the world.

“We stumble upon new species on every expedition to Madagascar,” said Glaw, who leads almost yearly expeditions to Madagascar from the Bavarian State Collection of Zoology in Munich. He has spent more than three decades uncovering the island’s reptilian and amphibian wonders, working closely with Malagasy collaborators.

Madagascar’s far north is a hub for Brookesia species, and there are 30 of them in this genus alone. The island as a whole has more than 100 species of chameleons, including the largest of these old-world lizards, the Parson’s chamelon (Calumma parsonii).

The newly described chameleon is not just micro in size — it is also micro endemic. It only occupies a narrow band of degraded rainforest on the Sorata massif in northern Madagascar. Unlike many of its tiny cousins that inhabit lowland forests, it is found in jungles lying 1,300 meters (4,300 feet) above sea level.

An arc of deforestation is creeping up on its habitat, the authors wrote in the paper. When the team visited the site in 2012, large swaths of low-altitude forests in the mountainous terrain were already vanishing as villagers cleared woodland to make way for farmland and pasture for their cattle. In the absence of other fuel sources, Malagasy people depend heavily on wood for everything from cooking to heating to construction.

Even as natural habitats continue to disappear on the island, species are being uncovered with astonishing regularity. Not quickly enough, given the threats to the country’s famed forests, Glaw noted. “There is a kind of race against extinction. I would not be completely surprised if many of these species will be gone by the end of the century,” he said.

The forest corridor where the Sorata massif is located was designated a protected area in 2015, kindling hopes that B. nana might yet be saved. Known by its French acronym, COMATSA Nord, the reserve spans 238,176 hectares (588,545 acres) and is one of the last remaining unbroken blocks of rainforests in Madagascar. It is managed by WWF.