ANTANANARIVO, Madagascar — To the detriment of the forests surrounding his village, Safidiharinjaka Emmanuel Tolojanahary knew only traditional farming methods. Like most residents of his village, located in eastern Madagascar, he cleared forest and burned what remained of the felled trees to open up a plot to grow rice. Locals call this slash-and-burn technique tavy.

In September 2019, when Tolojanahary was 23 years old, his desire to be more responsible for a better future and to learn new techniques pushed him to join a project that taught alternative agricultural methods with the aim of protecting the forests. Today he is the head of one of 16 groups of rural young people from the municipality of Lakato, in the Moramanga district of the Alaotra-Mangoro region, whom the Madagascan NGO Madagasikara Voakajy is training. His group, in the village of Ambodivarongy, is called Vintsiala, the vernacular name of the Madagascan pygmy kingfisher (Corythornis madagascariensis). The orange-and-white birds with outsized beaks live in the neighboring forest.

Tolojanahary and his team consider themselves ambassadors for the farming methods they have learned. “In my group, we want to unite those who live with us around our cause,” he said.

People’s subsistence needs are among the pressures weighing on Madagascan forests and on the extraordinary fauna that live in them. Protecting the forests therefore requires the participation of these populations. Confronted with the degradation of the Mangabe-Ranomena-Sahasarotra reserve, Madagasikara Voakajy launched the project for young farmers to find a balance between the needs of nearby communities and the survival of the reserve, which is home to critically endangered endemic species such as lemurs and the golden mantella frog (Mantella aurantiaca).

Targeting young people between 14 and 30 years old, the project provides training in sustainable farming techniques to improve the villagers’ means of subsistence, reduce pressure on the forest, and raise their awareness of lemur protection. The project also encourages them to carry out forest restoration activities such as reforestation.

“It’s thanks to the young people’s project that we knew that we are not obliged to carry out tavy in order to obtain a good rice yield,” Tolojanahary said.

The project highlights the protection of two lemur species that live in the Mangabe-Ranomena-Sahasarotra reserve. Classed as critically endangered on the IUCN Red List, the indri (Indri indri) and the diademed sifaka (Propithecus diadema) are threatened by the loss of habitat and by hunting.

According to Madagasikara Voakajy and the IUCN, scientists predict the population of these two lemur species will fall by at least 80% over a period of 30 to 33 years. In fact, the IUCN considers 103 of the 107 lemur species — the island’s iconic and endemic primates — to be threatened, of which 33 are critically endangered.

The indri and the diademed sifaka are among the largest lemur species and need a great deal of space to survive. Studies in the forests of Mantadia, close to the Mangabe-Ranomena-Sahasarotra protected area, have shown that on average the indri occupies territories of 13 ha (32 acres) in fragmented forests and up to 40 ha (99 acres) in primary forests.

Lemurs are the most visible of the protected area’s inhabitants. But the young farmers’ project should also help less-famous animals, such as the golden mantella, a frog species endemic to the region, and the Madagascan grebe (Tachybaptus pelzelnii), an endangered endemic bird.

“By highlighting the protection of lemurs, which require large spaces, we will also be able to encompass other, smaller species within the loop of our protection objectives,” said Voahirana Claudia Randriamamonjy, leader of the Mangabe young farmers’ project.

The loss of forest and fauna in the Moramanga area is due to tavy, among other factors that include small-scale logging, mining and hunting. People fell trees for construction, firewood, medicine and slash-and-burn farming. They hunt animals, such as lemurs and wild ducks, to eat or to sell for food at markets. 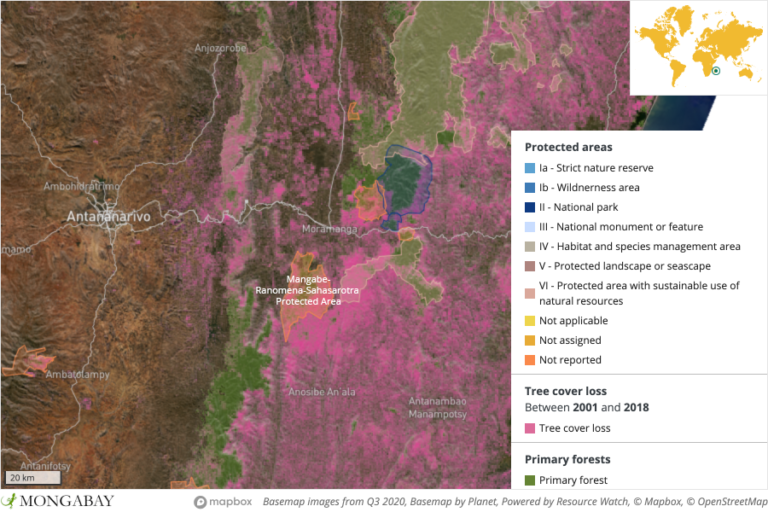 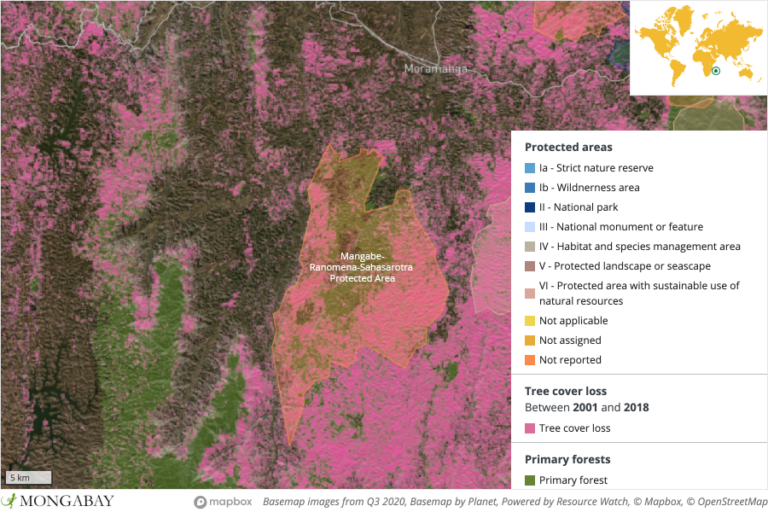 Facing poverty, the local population does not have many alternatives for subsistence but to turn toward the forests.

“People want to protect the indris but cannot, because they have to cut down the forests in order to be able to grow rice,” Tolojanahary said.

“Unfortunately and fortunately, the local community living near these protected areas can be the source of the lemurs’ conservation problems but is also the solution to those same problems,” said Zoavina Randriana, country director of The Mad Dog Initiative (MDI).

Thanks to her expertise in the forests of Andasibe-Mantadia, in the same region, every year Randriana and her team carry out campaigns to limit the stray dog and cat populations in the vicinity of the forests. The goal is to help protected wildlife by trying to limit their competition with stray domestic animals. MDI tries to raise local communities’ awareness of the need to limit the strays’ populations to protect both public health and wild animals.

According to Randriana, it is important to educate local people about conservation problems, but above all it is essential to empower them to make informed decisions and to act accordingly.

Financed by the IUCN, the Madagasikara Voakajy project around Mangabe-Ranomena-Sahasarotra began in 2016. Its second phase will last from 2019 until 2021. Most of the young participants have not received much education and will have little choice but to become farmers. The project maintains that sustainable farming techniques will offer them more promising opportunities than hunting or the destruction of forests.

During the first phase of the project, Madagasikara Voakajy trained seven groups with 45 participants. At the launch of the second phase, the project counted 16 groups spread among 16 villages with 158 young participants. Each group can choose to learn sustainable techniques for growing rice, beans or ginger, or for beekeeping.

The rice-growing teams carried out their first harvest in May 2020. They obtained yields of up to 2.9 tons per hectare (about 1.2 tons per acre), compared to 1 ton with the traditional growing method. The results for beans and ginger were not yet available when this story was originally published in French in November 2020.

Madagasikara Voakajy says it intends to involve the private sector to support these young people, notably by helping them find new markets for their products.

The approach of improving people’s means of subsistence to reduce pressure on the environment is common among conservation programs worldwide. Madagasikara Voakajy says it expects that over the long term the young people will become true ambassadors for lemur conservation, that their farming practices will improve forest habitats, and that they will no longer hunt the endangered primates.

“I think one of the greatest challenges for lemur conservation in Madagascar is to correctly balance the conservation of these species with economic and social development, especially in those localities near protected areas,” Randriana said. “Initiatives like the Madagasikara Voakajy project that enhance the participation of the local community are essential to tackling the root of the challenges relating to lemur protection.”

Furthermore, recently problems linked to COVID-19 are reducing the field of action for conservationists. Due to the health state of emergency from March 21 to Oct. 18 and the lockdown that lasted until mid-August, Madagasikara Voakajy had to postpone a planned fish-farming program. Additionally, the villagers’ situation has become very fragile. They are obliged to make use of whatever means of subsistence they can find. This precariousness increases the risk that people will infringe on protected areas, especially since monitoring has been reduced due to the pandemic.

Nevertheless, one young participant in the program, contacted by telephone in September during the government-mandated health state of emergency, expressed optimism. Daumiriry Rajaofelina, a resident of the village of Avolo, said he still believes in the success of the project and regularly contacts the NGO for advice on his bean plots, as well as information about the pandemic.

“After the trainings that I have had with Madagasikara Voakajy, I have seen that farming techniques have progressed a lot and that the harvests will be good,” said Laurent Randrianirina, a member of Fiaka, the Malagasy name for both the crowned lemur (Eulemur coronatus) and one of the groups trained by Madagasikara Voakajy. “The project is really effective and personally I plan to start growing ginger from now on, and I am going to leave behind the bad methods of the past.”

This article was first published here on our French site on Nov. 20, 2020.