BANDAR LAMPUNG, Indonesia — A brief clip recorded in October last year by a camera trap deep in the forest of Way Kambas National Park in Sumatra piqued the interest of Indonesian rhino expert Arief Rubianto. It shows the silhouette of a fairly large four-legged animal, with a hint of two horns on its snout.

In the video, the animal can be seen sniffing around a little and then backing away from the camera trap, almost as if sensing danger.

“Though it was from afar, we believe that it was a rhino,” Arief, director of the Alliance of Forest Integrated Conservation (ALeRT) for Way Kambas, told Mongabay Indonesia last November.

Despite the excitement of possibly spotting an elusive Sumatran rhino (Dicerorhinus sumatrensis) in Way Kambas, Arief said he was puzzled by the location where the video was captured and the animal’s behavior.

Camera traps are peppered around Way Kambas, a 130,000-hectare (321,000-acre) protected area that’s believed to be one of the last strongholds of the critically endangered Sumatran rhino. Park officials estimate the rhino population there is about 33 individuals, but other analyses give a much lower figure of around a dozen. The park is also home to the Sumatran Rhino Sanctuary (SRS), where conservationists have corralled seven rhinos for captive-breeding efforts.

The Indonesian government in 2019 launched a census of the rhino population to get a clearer understanding of the wild population as part of wider conservation efforts. The results are expected by the end of this year. Current estimates suggest that there are fewer than 80 individuals left in the world, mostly in Sumatra, with a handful in Kalimantan, the Indonesian portion of the island of Borneo.

Authorities in Way Kambas recently expanded the SRS captive-breeding facility and are now looking to catch three rhinos from the wild to add to the captive stock.

The animals are so elusive that even Arief, with his lifetime of field experience, has only encountered 10 of the in the wild. For him and other researchers and conservationists, it’s more common to see signs of a rhino presence: footprints, droppings, sleeping spots, and scratches on tree trunks made by the rhino’s horn. But even these traces of the species have become vanishingly rare. The behavior exhibited by the animal in last October’s camera trap video suggests the rhinos can sense the changes in their environment and are feeling more threatened, Arief said.

“Right now, the Sumatran rhinos in Lampung are going through a behavioral change from the normal,” he said. 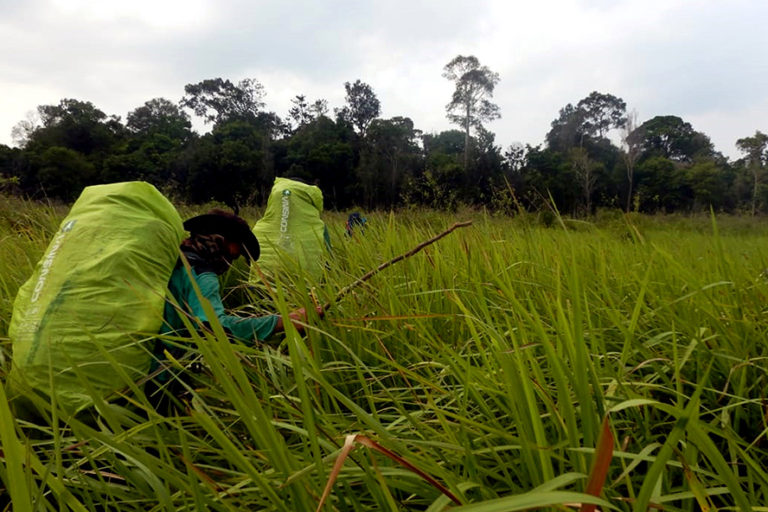 Indonesian officials launched a census in 2019 to get an accurate estimate of the wild Sumatran rhino population. The results are expected by end of this year. Image courtesy of the Alliance of Integrated Forest Conservation (ALeRT).Habitat destruction and poaching of other species are the top threats to the rhinos of Way Kambas, Arief said. Illegally set forest fires are a chronic problem in this area of swamp and lowland forest. In 2019 alone, the agency that manages the park reported more than 2,300 fire hotspots around Way Kambas, most of them lit by bushmeat hunters trying to flush out deer and boars. While the fires tend to be concentrated on the fringes of the park, they can spread uncontrollably, degrading the habitat of the rhinos, which need large swaths of unspoiled forest to live in.

“This what we must work on together, protecting the rhinos from [bushmeat] poachers,” said Amri, the interim head of the Way Kambas park agency. “The habitat’s condition must be improved, their natural feed must be provided as an effort to increase the rhino population.”

Amri said his agency also continued to beef up security across the park, support the captive-breeding program at the SRS, and replant parts of the park with the kinds of vegetation that the rhinos prefer to eat.

It also has a program underway to mitigate against burning by planting alang-alang grass and other fire-resistant vegetation, as well as fodder for elephants and rhinos.

Arief said it’s important to take these measures, given that Way Kambas hosts a significant percentage of the last remaining Sumatran rhinos on Earth.

“These rhinos can’t be found elsewhere, only in Indonesia — in Sumatra, particularly in Lampung province, and in Kalimantan,” he said.

This story was first reported by Mongabay’s Indonesia team and published here on our Indonesian site on Dec. 14, 2020.