2020 is a year that many people would like to forget. Here’s a look at 10 of the biggest environmental storylines to remember.

The impact of the COVID-19 pandemic transcended virtually everything in 2020, including the environment, from canceled summits on climate and biodiversity to a temporary dip in air pollution and greenhouse gas emissions, to greater awareness of the link between human health and planetary health.

2020 was supposed to be a landmark year for international meetings that would set the climate and conservation agendas for the next decade. But the pandemic led to many of those being canceled or postponed. Nonetheless, many companies and governments moved forward on establishing commitments to reduce carbon emissions, while researchers and NGOs published a spate of reports on how climate change is already affecting us, and what society needs to do to address the challenge.

The pandemic caused shocks to social and economic systems around the world. Lockdowns in March and April triggered a sharp retrenchment in travel and industrial activities, leading to a decline in associated emissions and some of the clearest skies in living memory. Stock markets and the price of many commodities dropped sharply, before roaring back in subsequent months. 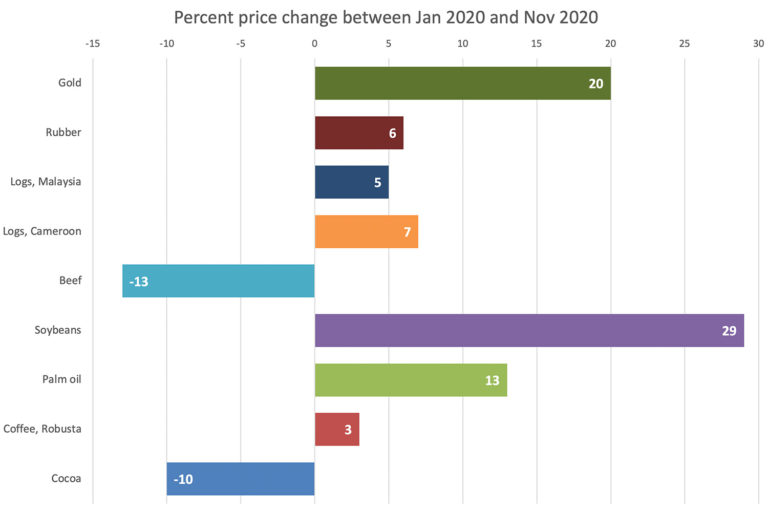 There was a lot of talk of the pandemic affording an opportunity to accelerate a transition toward greener development, but stimulus resources in many countries went toward emissions-intensive sectors, including fossil fuel production, heavy industry, and agribusiness.

Conservation efforts in tropical countries were especially hard hit by the pandemic. Sustainable development models and conservation projects dependent on ecotourism and research suffered from border closures, while governments in countries like Brazil and Indonesia relaxed environmental regulations and law enforcement, unleashing a spasm of illegal logging, mining, land invasions, and forest clearing. Deforestation in Brazil hit the highest level since 2008.

Stimulus money aside, the pandemic accelerated the global energy transition from fossil fuels to renewable energy.

Interest in electric cars, solar and wind energy, and smart grids surged, while demand for legacy fossil fuels, especially coal, plunged. Governments from the U.K. to California announced plans to ban sales of new gasoline-powered cars in the next 10-15 years.

ExxonMobil lost its place on the Dow Jones industrial Average after 92 years on the index.

World awakens to One Health

The global pandemic, caused by a zoonotic disease, finally drew the world’s attention to a threat that epidemiologists and conservationists have long warned about: our current approaches to agriculture and livestock production create conditions that enable wildlife pathogens to jump to humans. The “One Health” approach, which acknowledges the interconnectedness of human, animal and ecosystem health, suddenly became a mainstream topic in communities ranging from health to finance. Scientists warned that the world’s next pandemic could emerge from sectors in areas where forests are being rapidly converted into farms and ranches, like the cattle slaughterhouses in the Amazon rainforest. China established new restrictions on the wildlife trade.

Environmental defenders in the crosshairs

Pandemic-related lockdowns provided new opportunities for anti-democratic regimes, strongmen, and governments that abhor criticism to crack down on civil society, activists and the free press. In some places, governments took direct action against their critics, banning public gatherings and arresting protesters, activists and journalists. In others places, governments stood by as other actors intimidated and murdered environmental defenders. In Colombia alone, 300 environmental and human rights defenders were killed between Jan. 1 and Dec. 18, according to Indepaz. By contrast, a Global Witness report released in July 2020, which called 2019 the “deadliest year for environmental activists“, estimated 2019’s death toll of environmental defenders at 212 worldwide.

Protests over police brutality in the United States spread well beyond its borders, forcing a reckoning on systemic racism and social injustice in a wide range of sectors, including conservation organizations, environmental NGOs and academic institutions. The #BlackLivesMatter movement in the U.S. resonated with communities from the Amazon to Indonesian Papua, sparking solidarity movements and actions.

While scientists are always hesitant to link a particular weather event to climate change, 2020 provided plenty of examples of extreme weather, natural disasters and evidence of trends forecast by climate models.

The year opened with bushfires in Australia entering their seventh month (these would go on to burn for another three months). Before the year was out, fires had burned across tens of millions of hectares of forest in Russia’s Far East and Siberia, the Amazon, Angola and the Democratic Republic of Congo, and the Western U.S., from California to Colorado.

Temperature records were shattered around the world throughout the year. In February, researchers reported temperatures of nearly 21° Celsius (70° Fahrenheit) in Antarctica, while in August, California’s Death Valley registered the highest temperature ever recorded on Earth. In December, the World Meteorological Organization announced 2020 was likely to be the warmest year on record, 1.2°C (2.2°F) warmer than the pre-industrial average.

In April, the Great Barrier Reef experienced its third bleaching event in five years, while Arctic sea ice hit its second-lowest extent in September. Researchers warned that the Antarctic and Greenland ice sheets are primed to pass irreversible climate thresholds, potentially locking in substantial sea level rise by the end of the century. Scientists presented evidence a large-scale drying trend across parts of the Amazon rainforest, a potential sign that the combination of climate change, deforestation, and forest degradation could be pushing the ecosystem closer to a critical tipping point.

The 2020 Atlantic hurricane season was the most active on record, with 30 named storms, of which 13 were classified as hurricanes. Hurricane Eta, a category 4 storm, was the deadliest hurricane in the Atlantic Basin, killing more than 200 people, mostly in Central America.

Cleaning up the finance sector

“Financed emissions” were a major focus of campaigners in 2020, who targeted banks, asset managers and other financial institutions for the environmental damage caused by their lending. Fossil fuel companies around the world found it more difficult to get projects financed. For example, when the Trump administration announced it would open Alaska’s Arctic National Wildlife Refuge to oil and gas development, not a single major bank said it would finance operations in the ecologically sensitive area. Financial institutions also found themselves under pressure over their role in driving deforestation, fires and biodiversity loss from Borneo to the Amazon.

Some of the world’s largest companies committed to reach net-zero carbon emissions in the next 10-20 years. Among companies with trillion-dollar-plus market values, tech giant Microsoft went the furthest, announcing it would zero out all of its historical emissions dating back to its founding in 1975 and would commit to restore more land than it uses and become “water positive.” Even oil majors got in on the act, with Exxon, Royal Dutch Shell and BP pledging to modestly reduce emissions.

Trump’s assaults on the environment

The Trump administration’s decision to pull out of the Paris climate agreement was only one of many environmental policy rollbacks in the United States in 2020. Some of the other moves included:

Congress did, however, pass the Great American Outdoors Act, which created permanent funding for the Land and Water Conservation Fund and allocated resources for national parks. Trump signed the legislation into law. In addition, the proposed Pebble Mine, which would have had massive impacts on Alaska’s Bristol Bay and its watershed feeding the Bering Sea, including its iconic salmon runs, was halted, in part at the behest of Donald Trump, Jr.

Due to the pandemic, U.S. emissions fell to the lowest level since the 1990s.

In the aftermath of the U.S. presidential election, hopes were raised that the incoming administration of president-elect Joe Biden would reverse some of the Trump administration’s environmental policies. Biden made climate change a centerpiece of his campaign, including pandemic recovery efforts. The former vice president pledged to rejoin the Paris Agreement, issue a set of climate-oriented executive actions, and establish a 2050 target for reaching carbon neutrality. He also picked conservation-minded New Mexico Representative Deb Haaland to head the Department of the Interior: she would become the nation’s first Indigenous member of the Cabinet. But Biden’s efforts on all these fronts, including the appointment of Haaland, will likely face stiff resistance if Republicans retain control of the Senate following the January runoff election in Georgia.

There are numerous other important stories that didn’t make this list, from the outcry over the Chinese fishing fleet off the Galápagos prompting calls for stronger regulation of fishing in the high seas, to commitments to address plastic pollution, but we capped the number at 10. Please feel free to share other important stories in the comments below.