A local court in Peru today reversed a ruling against employees of a company charged with illegal deforestation in the Peruvian Amazon, effectively absolving them of crimes associated with converting rainforest into a cacao plantation. The move undercuts a years-long investigation into the deforestation and “sets a terrible precedent” as Peru struggles to combat rising forest loss in the region, say prosecutors and environmentalists.

Today the Superior Court of Justice of Loreto was expected to ratify the sentences of three Cacao del Perú Norte SAC company officials for their involvement in the clearance of 1,950 hectares of forest in the Peruvian Amazon outside the town of Tamshiyacu. Instead, the three men saw their sentences and fines dismissed by Superior Court Judge Guillermo Bendezú.

Today’s ruling frustrated Peruvian authorities who were hoping the case would set a precedent to deter other companies from violating the country’s environmental laws.

“This sentence produces frustration. We expected an exemplary sentence,” Julio Guzmán, the Public Attorney for the Ministry of the Environment, told Mongabay. “This is a serious blow to the fight against deforestation. Society was expecting a stronger sentence.”

Guzmán also said the judge didn’t appear to consider all the details of the government’s case.

“I think the judge did not understand the case well and did not want to give the case enough of his time to understand it,” Guzmán said. “It is so devoid of support that it does not pronounce on the 15 million civil reparation that had been imposed on the company in the first instance.”

The full contents of the decision have not yet been made public, but the Ministry of the Environment said via Twitter that it would appeal the decision to the Supreme Court.

The judge’s decision wasn’t a complete surprise to observers who have been watching the case, including the efforts by Tamshi SAC – as Cacao del Perú Norte SAC is now known – to overturn the original verdict.

“There has been strong lobbying by the company in local media [and] meetings with authorities. We even saw former president Martín Vizcarra in Tamshiyacu,” said Julia Urrunaga, director in Peru of the Environmental Investigation Agency (EIA) referencing Vizcarra visit to the area in October. “It is frustrating to see this setback.”

According to the Public Attorney Guzmán, Tamshi SAC has also made legal maneuvers to strengthen its position, suing Guzmán and three other public officers for procedural fraud and falsification of documents in an effort to get them dismissed from the case. (Disclosure: Cacao del Perú Norte SAC’s parent company United Cacao Limited SEZC threatened legal action in 2015 against Mongabay for its reporting)

“It is an act of intimidation,” said Guzmán. “I am being sued for doing my job. And just as they do with me, they do with other prosecutors.”

Cesar Ipenza, an attorney specialized in environmental issues in Peru, called the court’s decision a “regrettable sentence that responds to pressure from the company,” noting that the court had “[taken] the side of an economic group backed by lawyers from the most expensive firms in the country and linked to political power.”

The company’s backers, he said, “carried out a campaign to free themselves from responsibility.”

Urrunaga from EIA-Peru said the decision had broader implications for efforts to crack down on illegal deforestation in Peru.

“The first sentence for Tamshi was considered exemplary. It was a paradigm in the investigations on forest destruction and for the first time we were seeing real sanctions,” Urrunaga said. “A company that does not act in compliance with the law cannot be forgiven just because it employs the local people.”

“We must not allow impunity,” she added.

“The sentence of the Iquitos criminal chamber is embarrassing because it ignores the enormous amount of evidence and proceedings of the prosecution to demonstrate that illegally sourced timber had been traded,” said Masquez. “[This decision] sets terrible precedent for a company whose responsibility has also been determined by the OEFA [Environmental Assessment and Enforcement Agency], in the sense that it has been shown that it has been operating against what the environmental standards indicate in our country.”

OEFA had imposed a fine of 130 million soles ($37 million) on the company.

The history of Tamshi SAC

In 2010, the Czech-American citizen Dennis Melka established a network of companies in Peru for the large-scale cultivation of oil palm and cacao in the departments of Loreto and Ucayali. The company Cacao del Perú Norte SAC was part of this network and was included in the investigations led by the Public Ministry, after the agency detected various irregularities within its holdings.

During the process, which began in 2013 and lasted around six years, the company changed its name to Tamshi SAC.

In the first trial against Tamshi SAC, prosecutors used satellite images to show the company had converted almost 2000 hectares of primary forest near Tamshiyacu, directly contradicting the company’s claims that it hadn’t cleared such forest. The trial, according to the prosecution, also showed that Cacao del Perú Norte SAC carried out all its activities without the permission of the Ministry of Agriculture, the authority responsible for forest management in Peru.

At trial, the defendants claimed that the 30,000 board feet of wood that was felled in that forest had been left to decompose. But the prosecution proved that the wood was extracted, then illegally converted into timber and commercialized, which meant the company had committed the crime of illegal trafficking.

A second case against the same company, called Cacao II, is still under investigation. This complaint focuses on the deforestation that has occurred in Tamshiyacu since 2014. The defendants in the second case include Dennis Melka and the managers who have worked at the company since 2014. 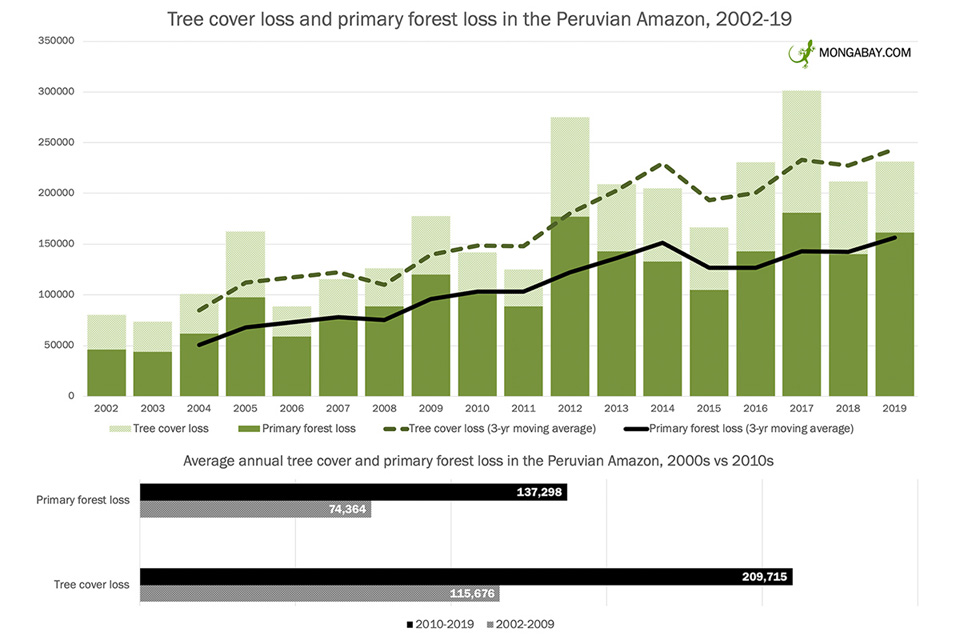 Deforestation has been trending upward in Peru since the early 2000s, according to tree loss data from researchers at the University of Maryland and Global Forest Watch. Industrial plantations expanded significantly in Peruvian Amazon in the 2010s.