by Malavika Vyawahare on 17 December 2020

A long and intense fire season is exacting a grim toll across Madagascar. At its onset in May, a wave of fires ate into the dry forests that line the island’s western coast, one of the world’s most threatened biomes. In the past two months, the rainforests fringing the eastern coast have gone up in flames.

“This year, the fire points in Madagascar are very numerous bush fires, forest fires, urban fires,” said Haingosoa Hortençia, a national coordinator for the Green Party, who until recently worked at the environment ministry, or MEDD. “There are fires all over the twenty-two regions of Madagascar.”

An interactive map from Global Forest Watch displaying fire alerts recorded by NASA satellites from September 1 to December 1 this year.

In the period from May to November, 50,000 more fire alerts were recorded this year compared to last year, a 17% rise, as per NASA satellite data analyzed by the forest mapping platform Global Forest Watch (GFW). In the past three months alone Madagascar has reported nearly 200,000 fire alerts.

Hortençia blamed the environment minister’s “negligence, ignorance and bad governance,” for the situation, saying they should have had a longer-term strategy to fight the fires and been more responsive to reports from the ground. The minister contests these claims.

One could fit 16 Madagascar-sized islands into the U.S. and still have room to spare. Yet, the African nation is estimated to host three times as many snail species as the entire continental U.S. When fires raged in the heart of Manombo Special Reserve, some of these slow-moving mollusks likely did not escape the flames.

The protected area alone hosts more than 50 species of snails. “Snails are very, very bad at escaping rapidly, their only method of traveling is crawling,” said John Slapcinsky, who manages the mollusks collection at the Florida Museum of Natural History.

Multiple sources confirmed to Mongabay that about 100 hectares (250 acres) in Manombo Special Reserve in southeastern Madagascar, woodland the size of 800 Olympic swimming pools, went up in smoke last month.

A juvenile land snail belonging to the genus Tropidophora. Image by Rhett A. Butler/Mongabay.

In nearby Befotaka-Midongy National Park, one of the largest stretches of evergreen forest in the country, more than 1,000 fires were reported this year. More than 500 occurred in the last month alone, according to official data.

Many experts predicted that Madagascar would witness a devastating fire season this year as COVID-19 disrupted economic activity and livelihoods, and the country plunged deeper into poverty. Despite its natural riches, three in four Malagasy people live on less than $2 a day.

Pandemic-related restrictions curtailed migration to bigger towns, forcing people to eke out a living from the resources at hand. Unrelenting dry conditions in the south have only added to the misery, leaving 1.5 million people, including 100,000 children with little to eat, forcing some to survive on ash and clay.

The dry conditions and failed crops have also increased dependence on forests in the region.

According to satellite data analyzed by Greenpeace and GFW, October and November saw an unusually high number of fire points this year. The fire season usually begins in June, intensifying in July and August before winding down in November, with the start of the rainy season.

Clearing land to grow crops is a leading cause of deforestation across the island. However, there could be more at play this year. 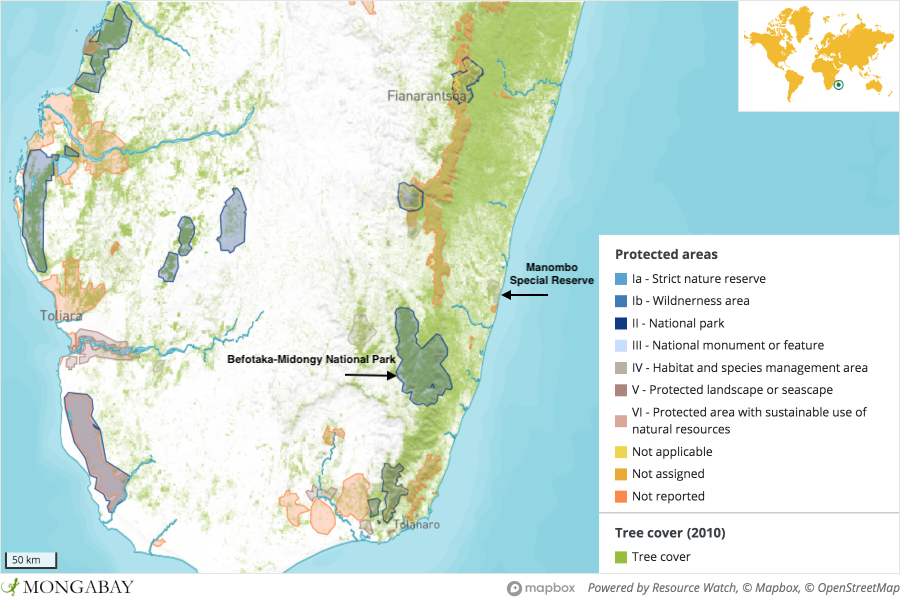 “All of Madagascar is burning. It is not just slash and burn,” said Jonah Ratsimbazafy, a Malagasy environmentalist and recently appointed president of the International Primatological Society. “I was in Manombo, and it is just people’s anger against mismanagement. When people are not happy, they burn the forest.”

Fires are not just a way for farmers and herders to create land for crops and pastures but also a long-standing tool of resistance against the government’s tight grip on natural resources and in particular forests. Governments have over the years struggled to strike a balance between punishing those responsible for setting the fires while not alienating the population.

Ratsimbazafy is head of the NGO Groupe d’Etude et de Recherche sur les Primates de Madagascar (GERP) that supports communities in managing the Manombo classified forest adjoining the special reserve, where the use of forest resources by people is allowed.

Eight species of lemurs live in this region, including three critically endangered ones. Almost all of its 52 snail species are endemic to Madagascar and adapted to the rainforests.

“These animals are soft bodied and wet, they have to prevent themselves from dehydrating,” said Slapcinsky, the mollusk expert. “The reason they are endemic to the moist forests is because they cannot handle living in savannah areas outside the forests. If you remove the forests, you remove their ability to survive.”

Spread across 5,000 hectares (12,350 acres), Manombo’s lowland rainforest and marshes host more than lemurs and snails; the reserve has 58 species of birds and a plethora of plant life unique to Madagascar. Conversion of forests to paddy fields and fires have chewed away at it over the years.

The reserve is managed by Madagascar National Parks (MNP), a quasi-governmental agency primarily funded by foreign donors but overseen by the environment ministry. It has 43 protected areas (PAs) under its charge, including national parks and special reserves. “In the classified forests where we work, we do something for the community. But the MNP, they just apply the rules without connecting with the people, people are mad,” Ratsimbazafy said.

Befotaka-Midongy, which the MNP also manages, is much larger, with 205,984 hectares (509,000 acres) of low-lying and medium-altitude humid forests, and swampland. It is a birder’s paradise, with more than 65 species of birds. The forests are also a treasure trove of high-value timber, home to five varieties of palisander and three kinds of ebony trees.

While fires raged in the countryside, a heated debate erupted online, with activists like Hortençia raising the alarm and blaming the environment ministry. Hortençia’s posts on Facebook, where she goes by the name Randrianasolo Yoann Stivel, attracted the ire of Minister Baomiavotse Vahinala Raharinirina, who defended her record on the platform and in response to Mongabay’s questions.

“Fires are less than in 2019 and 2018. People think we have more fires than these previous years because we have published the fire situation of Madagascar since February, every day,” Raharinirina told Mongabay over email. “No other minister did it before. The aim is to inform, to educate, and to call for action,” she said.

However, MNP data for 36 protected areas show that the number of reported fires is higher this year than last year, though lower than in 2018. The ministry will release comprehensive data for all protected areas by year-end.

The government has promoted a “zero-tolerance” policy against illegal loggers and those who start fires to clear land. Some say the policy has failed, noting that those who set fires are not punished and the regional authorities under the MEDD react slowly once fires emerge.

The minister maintains the blame is shared.

“A bit fed up with the MEDD bashing. Where are the civil society organizations to fight close to us? Especially those who benefited from so many funds in the name of the conservation in Madagascar?” Raharinirina commented on Facebook in response to a user posting about the fires.

It has opened another front between the minister and protected area managers. The minister has already initiated a review of how these areas are managed and pushed for conservation to be more people-centric. Her criticism of NGOs, who are designated managers of most of the country’s protected areas, has rankled some.

“She blames the NGOs that receive money for conservation; they should be responsible, she says. The ministry does not get money, so it is not her responsibility,” Ratsimbazafy said, “but you are the minister; you should do something to stop it rather than complaining.”

At the same time, he acknowledged that the country’s political climate is not conducive to implementing such a crackdown on fire starters. “Some of the parliamentarians encourage people to do it,” he said, referring to the setting of forest fires, “it is common for parliamentarians to tell the ministry not to apply the rules. They want people’s votes.”

The controversy has flared up in the run-up to a cabinet reshuffle expected in January. The government of President Andry Rajoelina, which came to power in January 2019, has adopted a policy of evaluating ministers annually and replacing them if necessary. Raharinirina took charge as environment minister only in February this year after her predecessor, a politician from Hortençia’s Green Party, was removed from office.

In her emailed responses to Mongabay, Raharinirina highlighted her attempts to usher in long-term changes like shifting away from wood-based charcoal to gas for household use. “In Madagascar, we consume 450,000 tons of charcoal versus 15,000 tons of gas. And you need 100kg of wood/tree to produce 10kg of charcoal,” she said. “This is a disaster and explains the rise of deforestation for 30 years in our country.”

The window to save Madagascar’s precious forests is narrowing fast. Despite yearly fluctuations in fires reported, the overall trend remains alarming. Since the dawn of the century, the country has lost close to a fourth of its green cover. At this rate, the Red Island will hardly have any green left to save at the close of the 21st century.