The mountainous forests of northern Madagascar are biodiverse beyond measure, containing plant and animal species found nowhere else on the planet. Other forests in Madagascar have been lost in recent centuries and decades, but these have stood the test of time and remained relatively unscathed. They are difficult to access, and some have been officially protected since the 1920s. And yet their protected status is no longer enough: satellite data show they are now being cut down at an increasing rate.

In May, Mongabay reported on the dire situation in Tsaratanana Reserve. Since then, deforestation has continued apace, both in Tsaratanana and a neighboring protected area called COMATSA. Levels of deforestation have spiked since September, according to satellite data from the University of Maryland (UMD) visualized on Global Forest Watch. The dry months of September and October are normally peak season for slash-and-burn, and sources say the clearing is especially severe this year due to economic pressures caused by the COVID-19 pandemic.

Experts say the forests are being burned and cleared primarily to make space for fields of marijuana, vanilla, and rice. The scale of the biodiversity loss is immeasurable, conservationists add. Many of the forest areas are so remote that their flora and fauna have not yet been surveyed.

“[This] is a loss for everyone,” Brian Fisher, an entomologist at the California Academy of Sciences who has worked in the region, told Mongabay after looking at satellite images that show the deforestation. “It hurts my heart to see these patches. It hurts because I know that the value of the forest as a forest is so much more.”

Tsaratanana, which means “good place” in Malagasy, has a certain mystique among scientists. “It’s a magical forest … the most mysterious place in the entirety of Madagascar,” Maria Vorontsova, a botanist at Royal Botanic Gardens, Kew, who has worked in the reserve, told Mongabay.

It’s now unclear how long the reserve will remain in good health. Tsatananana’s river valleys, where species richness is especially high, are being stripped of their forests, more so than in past decades, when they did face some threats. Meanwhile, at higher altitudes, once-continuous forest is being threatened for the first time as clearing advances upward; Mongabay has identified several recently deforested areas at elevations higher than 1,600 meters (about 5,200 feet), which researchers say marks the threshold for habitat that is particularly important for the region’s endemic, endangered wildlife. 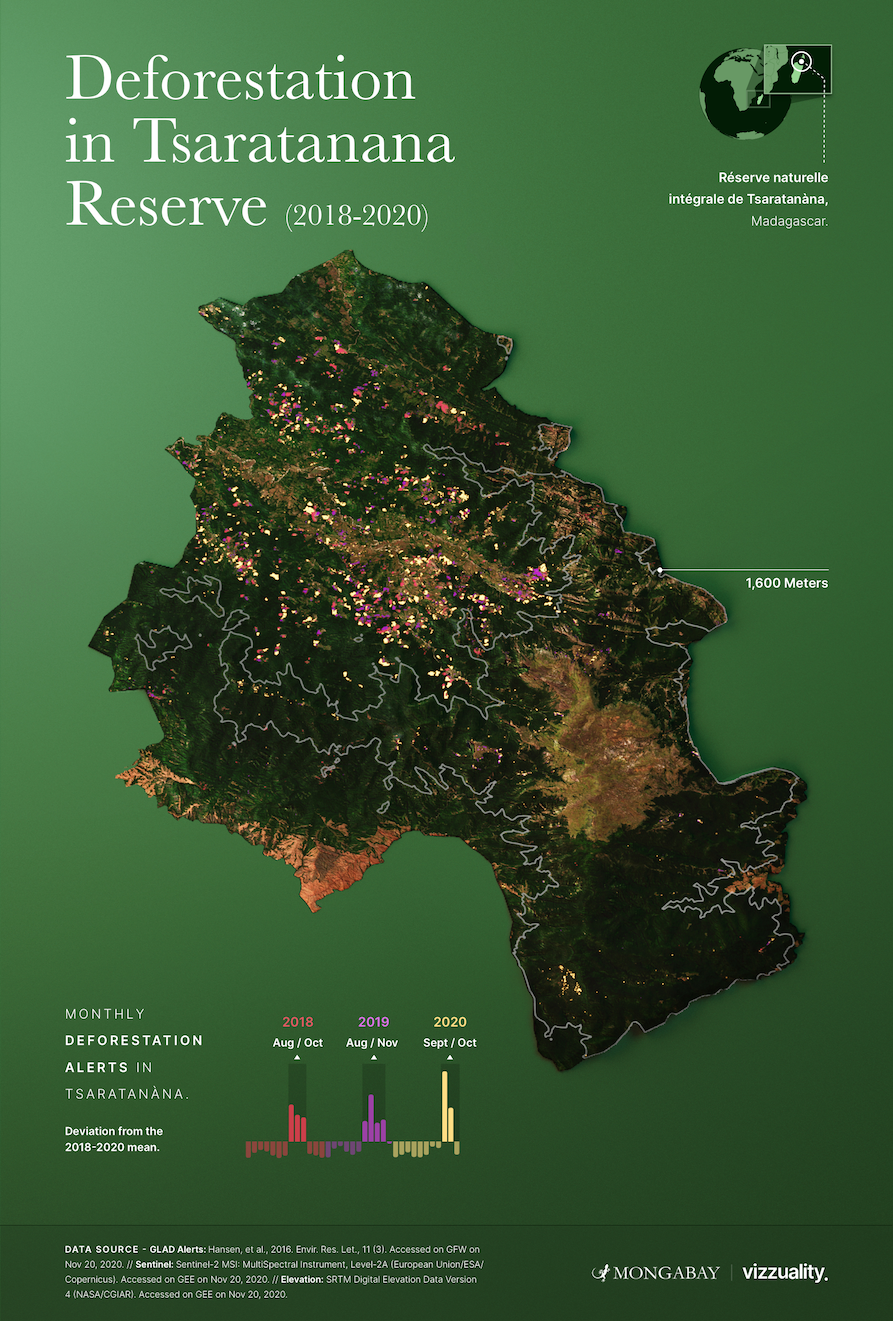 The change did not come overnight. Deforestation levels in Tsaratanana inched up in recent decades, then exploded in the last few years. Between 1996 and 2006, Tsaratanana lost only about 0.1 % of its forest cover to deforestation per year; things got worse from 2006 to 2016, when the level of deforestation increased to about 0.5 % per year, according to a three-volume compendium of Madagascar’s protected areas published by the University of Chicago Press in 2018. Since 2016, the rate has been 1.3% or higher every year, according to Madagascar National Parks (MNP), a semi-public agency that manages the reserve. Government data for 2020 is not yet available, but preliminary satellite data from UMD visualized on Global Forest Watch indicate the deforestation rate in 2020 may be higher than in years past.

The double whammy of deforestation and climate change could have a severe impact on wildlife populations, scientists warn. Tsaratanana’s elevational range makes the area suitable for a diverse set of plants and animals, including, for example, four genera of endemic bamboo (Hickelia, Oldeania, Sokinochloa and Nastus) and 15 species of tenrec (family Tenrecidae), a shrew-like animal. The reserve also provides crucial habitat for several threatened species found nowhere else in the world, including at least four endangered frog species: Rhombophryne guentherpetersi, Rhombophryne ornata, Rhombophryne tany and Cophyla alticola.

Many species will likely have to shift upslope as the area warms. Indeed, the warming is already pronounced — the protected area’s average temperature increased by 2.4° Celsius  (4.3° Fahrenheit) between 1985 and 2014, according to the compendium — and some species have already shifted. If their habitats become fragmented by deforestation, they may have nowhere to go to escape the heat.

Some of the marijuana product is exported via Nosy Be, a coastal city in the northwest, to nearby Indian Ocean islands. It fetches high prices in the island of Mauritius: an average of about $67 per gram, according to a forthcoming report from the Global Initiative Against Transnational Organized Crime. Marijuana is also consumed in Madagascar. The price there is low — about $0.03 per gram — but it’s still considered a profitable domestic business.

To stop the clearing and burning, MNP is partnering with law enforcement, forming what it calls “mixed brigades” that descend into the depths of the forest. According to MNP, the brigades have conducted five missions this year, during which they arrested 13 people, destroyed dozens of camps and shelters, and incinerated several tons of marijuana that had already been packaged in bags and cans; they also destroyed 35 hectares (86 acres) of marijuana fields.

UMD satellite data show significant deforestation since September. When first contacted for this article, in October, MNP representatives indicated that the data were misleading — that many of the recent tree cover loss alerts were showing deforestation from previous years. However, following brigade missions over the last three months, MNP has confirmed to Mongabay that many of the alerts from the satellite system reflect recent deforestation. Satellite imagery of locations corresponding with the alerts also confirms that much of the deforestation is recent, particularly in upland areas.

In COMATSA, people are clearing the forest mainly to plant vanilla or rice, and there is also a very small amount of marijuana cultivation, according to Maeva Volanoro, a technical officer for WWF, which manages the protected area.

For many years, COMATSA was somewhat well protected, with deforestation rates at just 0.3-0.5% of the protected area’s forest cover per year, according to WWF. But that has changed in the last three years.

Some of the change has been due to fluctuations in international commodities prices. Madagascar produces roughly 80% of the world’s vanilla, and much of it cultivated in the northeast. In 2018, vanilla prices were especially high, and this led to a demand for more land to grow the beans. Consequently, deforestation rates in COMATSA increased to 1.7%, which amounted to 4,224 hectares (10,438 acres) of forest lost that year, about one-third of which was in the “hard-core” zones designated to protect primary forest. As the vanilla price dropped, pressure on the forests went down by about half in 2019, but deforestation is on the rise again this year, despite low vanilla prices, Volanoro said.

The regional outpost of the environment ministry has attempted to control the spate of slash-and-burn in COMATSA, with three patrols since August. Its work on the ground has confirmed what the Global Forest Watch data show.

“Like we’ve seen in the satellites, the situation is bad,” Volanoro told Mongabay.

As in Tsaratanana, the deforestation poses a threat to COMATSA’s biodiversity. It’s one of the only homes of the critically endangered silky sifaka (Propithecus candidus), a large lemur with white fur. It’s also a crucial link in the chain of mountainous forests running across northern Madagascar. Indeed, the name COMATSA is short for “corridor Marojejy Tsaratanana”; it was designed to connect Marojejy National Park in the northeast with Tsaratanana Reserve in the northwest. It became a fully fledged protected area in 2015. Officially, it’s two protected areas, COMATSA north and south, with slightly different conservation rules in each.

Unlike Tsaratanana, COMATSA has a mixed-use status that permits local people to pursue livelihoods such as farming and to use resources in the protected area (except in the “hard-core” zones that have stricter rules). Community groups from villages near the protected area help manage and patrol it, with support from WWF.

Despite the more flexible rules, all of the clearing detected in COMATSA is illegal: even in sections of the protected area where human activity is allowed, deforestation is not. Moreover, slash-and-burn farming violates national law unless a permit is issued.

The uptick in deforestation since September coincides with the region’s dry season, which is normally the peak period for slash-and-burn activity. Fires are easier to set in the dry conditions, and cultivation isn’t possible then, so people have time to clear the forest in preparation for the rainy season, which begins in November or December.

Economic pressures caused by this year’s global recession are exacerbating the seasonal trend, local conservationists say. A lack of tourism in Madagascar has rippled through the entire economy, leaving people who live near the forests with less money, and thus more need to exploit them. Meanwhile, MNP has missed out on nearly all of the revenue it earned from ticket fees at the 46 protected areas it runs: it took in $1.84 million in ticket fees in 2019, but only about 5% of that this year.

These multilayered conservation challenges will not be easy to solve, but the singular nature of the problem in Tsaratanana does lend itself to possible solutions. Conservationists told Mongabay that if marijuana cultivation laws were changed, a more transparent farming and management system could be put in place and people would have little reason to farm the crop in the depths of the forest. Madagascar’s environment ministry did not respond to a request for comment for this article, including a question about whether such reforms are being considered.

Madagascar’s marijuana laws are a remnant of French colonialism and, perhaps, subject to change. Many countries around the world have reformed their marijuana laws in recent years, and a 2019 op-ed in La Gazette, a Malagasy newspaper, called for Madagascar to do the same. The author argued that legalizing the trade would benefit farmers, medical users, and the public purse. It might also help the tenrecs in the country’s northern forests.