ALBAY, Philippines — Spotting false geckos in the wild can be hard. They can easily disappear into their environment thanks to their cryptic colors and markings and their use of hollow areas to hide in.

That makes it a challenge to study these forest lizards from the genus Pseudogekko. Until recently only nine species were known to science, all of them endemic to the Philippines. Now, a new paper in the journal Herpetologicadescribes a 10th species, and makes the case that there could be even more waiting to be discovered.

Pseudogekko hungkag is described from six specimens collected between 2015 and 2017 from the Bicol region on the southeastern tip of the main Philippine island of Luzon. Like others in the genus, they’re delicate, slender-bodied and distinctly elongated lizards. A preference for highly specialized microhabitats like tree-trunk cavities, coupled with cryptic behavior, make them notoriously hard to find even by experienced field biologists. They also give the new species its name: hungkag means “hollow” or “empty” in Filipino, hence the common name, Bicol hollow-dwelling forest gecko. 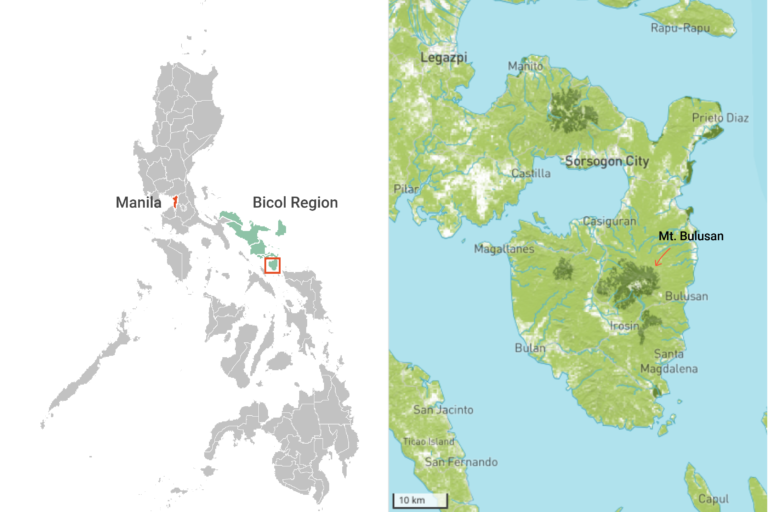 In the past decade, six species in the genus were described through revisionary studies, where existing research on habitat, appearance and molecular descriptions are revisited and thoroughly compared with present data for proper species identification.

The descriptions of the 10 species to date show that “a number of these enigmatic forest lizards are particularly rare, mysterious, and have restricted geographic ranges — all of which translates to their species diversity coming to light just now,” according to the Museum of Natural History at the University of the Philippines Los Baños (UPLB).

This recent wave of research also reveals that this genus is far more diverse than previously realized, which emphasizes the importance of further survey work.

Five of the six P. hungkag specimens collected for the latest description were found in a regenerating secondary forest on Mount Jormahan in Sorsogon province, while a juvenile male specimen was collected in a coastal forest in Camarines Sur province. Both sites are relatively undisturbed forest habitats at low to mid-elevation. Both are also non-protected areas.

Jason B. Fernandez, part of the research team, says he first recognized the lizard’s uniqueness when he photographed one on Mount Pocdol in Albay province in 2013. That image served as the team’s clue to the eventual discovery of P. hungkag, which has inverted Y-shaped markings in the entire length of the tail, and golden-yellow eyes.

Camila G. Meneses, a junior researcher at the UPLB Museum of Natural History and member of the field expedition team, tells Mongabay there’s a possibility the new species may be more widespread outside of Sorsogon province.

According to the researchers, “viable populations of the new species may be present in surrounding protected areas in the region,” including on Mount Bulusan, an active volcano that’s home to a protected park adjacent to Mount Jormahan, where most of the specimens were collected from.

But any effort at further research on Mount Bulusan remains hampered by a prevailing restriction on herpetological inventory work within the boundaries of the park.

Research lead Rafe Brown, from the Biodiversity Institute at the University of Kansas, tells Mongabay that with no previous studies on the species, it’s hard to pinpoint its geographical range. “We just don’t know, because they have remained unstudied by scientists until now,” he says. But documenting whether the species does occur within the critically important protected areas of Bicol is an exciting prospect for future collaborations, he adds.

During their field work in three areas on the Bicol Peninsula, in particular when they approached individuals with their headlights, the researchers noted that P. hungkag displayed a tendency and ability to hide in hollow areas. However, “their cryptic behavior is not the only key to understanding how the new species thrives or whether they are more widespread throughout Bicol,” Brown says.

Factors like the unique biodiversity of Bicol, its difference from other islands, and research challenges and their impacts on conservation efforts and management could also offer insights into how widespread the species may be, Meneses says.

Brown says these discoveries of species of animals and plants that are completely unknown to the world until now — despite the many pressures on wildlife and natural habitats — may stoke greater appreciation of the Philippines’ biodiversity and prompt better management of its wilderness areas.

“In light of the highly fragmented nature of forested habitats of southern Luzon,” the researchers conclude, “we suspect the new species might be vulnerable to extinction as a result of habitat loss.”

Banner image of the P. hungkag, the 10th pseudogekko species identified in the Philippines. Photos courtesy of Rafe Brown and Jason Fernandez.