Mongabay’s most read post during the month of October on our global English news site was a commentary from David Wilkie, Susan Lieberman, and James Watson from the Wildlife Conservation Society on the importance of protecting Indigenous Peoples’ traditional land rights to achieve conservation outcomes. Published at the end of September, the piece had more than 145,000 pageviews during the month.

Overall, traffic across all of Mongabay’s bureaus amounted to 10.8 million pageviews, a 16% increase over a year ago, bringing total on-site readership for 2020 to 121 million pageviews so far.

Below are the 20 articles with the most traffic during the month of October. 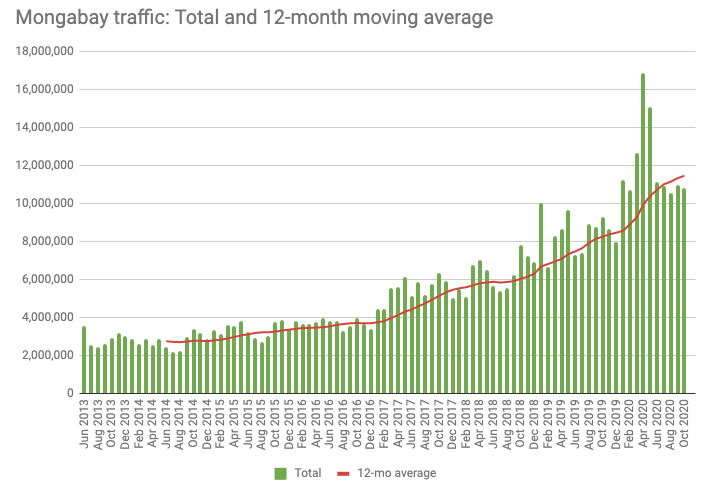 Rangers on the run: Half-marathon aims to raise funding for front-liners

Exploring the history of the Amazon and its peoples: an interview with John Hemming

In Brazil’s Pantanal, a desperate struggle to save a hyacinth macaw refuge from fire

Spots of hope: Some good news for South Africa’s cheetahs

‘We are all ecstatic’: Rescued wild pangolin gives birth to healthy pup

Podcast: A radio program is helping save critically endangered gorillas in Nigeria

New tool alerts ships when whales are near. But will they slow down?

Bolivia’s jaguar seizures down as suspicions rise over new mafia

Header image: Nasrullah, a fisherman from Lombok island, shows one of the lobsters raised in his aquafarm. Image by Fathul Rakhman/Mongabay-Indonesia.