JAKARTA — Activists have slammed one of the world’s biggest pulp and paper companies for clearing peatland in Indonesia despite its zero-deforestation pledge. They say Asia Pacific Resources International Holdings Limited (APRIL) should have restored the previously burned area instead of cultivating it.

The peat clearing, allegedly done by APRIL mill operator and subsidiary PT Riau Andalan Pulp & Paper (RAPP), was first reported by villagers in Indonesia’s Riau province, on the island of Sumatra, to NGOs operating in the region in July 2020.

One of those NGOs, Jikalahari, launched an investigation by deploying a team to do a ground check. The team found RAPP had cleared areas where the peat layer was more than 3 meters (10 feet) deep. These areas of deep peat are supposed to be protected, but RAPP was found to have cleared them using heavy equipment in order to start planting acacia trees, the main pulpwood crop. The company reportedly also cleared oil palm crops planted by villagers in the area.

Based on satellite images, Jikalahari found a total of 675 hectares (1,668 acres) cleared by the company, parts of which had been burned in forest fires in 2016. That would have made them priority areas for restoration under a government program.

RAPP’s concession in the area includes 699 hectares (1,727 acres) that overlaps onto priority peat restoration area; a tenth of that area has already been cleared by the company, according to Jikalahari.

Jikalahari’s investigators also found construction of 2 kilometers (1.2 miles) of new canals in areas of deep peat to drain the soil. The canals are connected to the newly cleared peatlands that have already been planted with acacia trees. Jikalahari also found the company to be expanding its old canals by widening them. 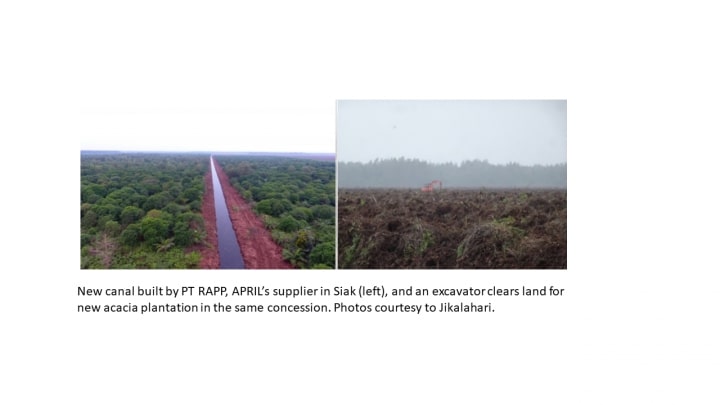 “Since we evaluated the policy in its first two years of implementation until now, the sustainability commitment still serves as greenwashing for the market,” he said. “With or without the SFMP, they are still cutting down trees.”

A coalition of NGOs in Sumatra, including Jikalahari, said APRIL and its affiliated companies and suppliers have a history of clearing peatlands going back to at least 2004. They say the degradation feeds fires that burn almost every year in the region.

In 2016, the government issued a warning to RAPP for violating a peat-clearing moratorium, after the company had cleared peatlands on its concession in the Meranti Islands district of Sumatra’s Riau province. Indonesian President Joko Widodo had earlier banned all peatland clearing to allow the government to finish a mapping exercise to identify peatlands that should be protected and those that could be cultivated.

In a response to Jikalahari’s findings, APRIL said in a statement that the clearing of peatlands was legal because they were areas designated for development and did not constitute peat domes. APRIL added that RAPP had submitted its plan to clear the peatlands to the Ministry of Environment and Forestry and had it approved.

APRIL also said the peat development reduced fire risks in the area. It said the area had been badly burned and degraded by illegal clearing and smallholder oil palm development since the late 1990s, and that when RAPP obtained its concession in 2000, there were already a large number of illegal plantations, land claims, unmanaged canals, and ongoing burning.

APRIL said planting the area with acacia was better than letting it go unmanaged and encroached on by oil palm farmers, and that RAPP had since worked on ending land disputes with smallholders and community groups.

“As these claims have been progressively resolved and illegal plantation activities stopped, fiber plantation canal structures have been cleared and repaired to improve the water management in the area and reduce the fire risk,” APRIL said. “Importantly, the number of illegal fires in these areas has decreased to zero.”

Okto said that if RAPP was serious about protecting the peat area from fires, it should have restored the site to its original condition rather than develop it even further.

“They didn’t see [these areas] that were previously burned as something that needed to be restored at all,” he said.