by Malavika Vyawahare on 7 October 2020 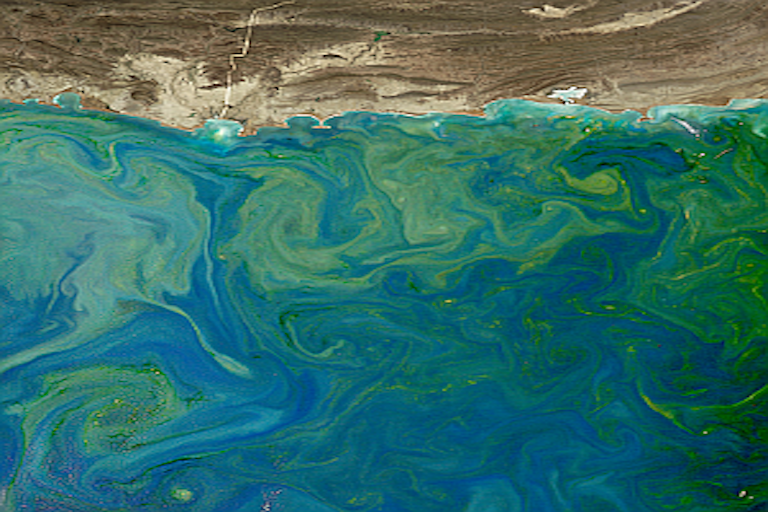 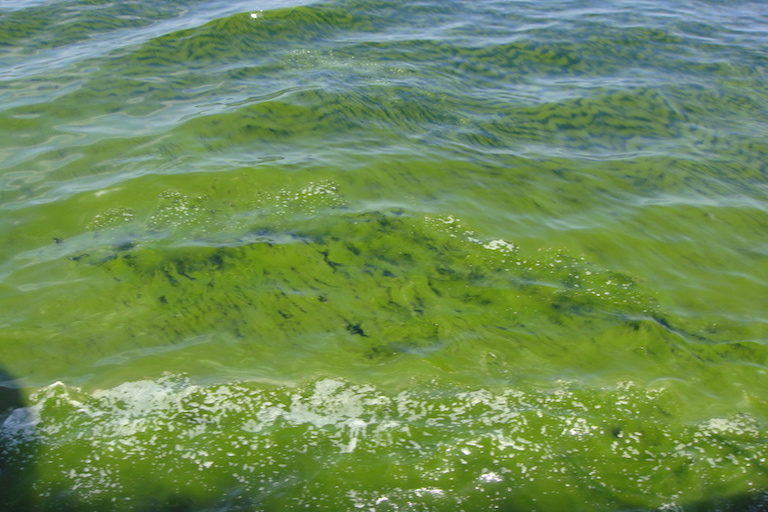 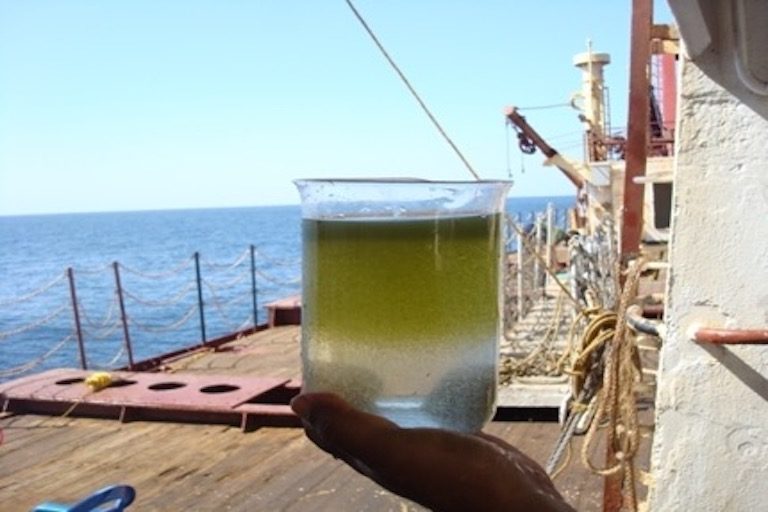 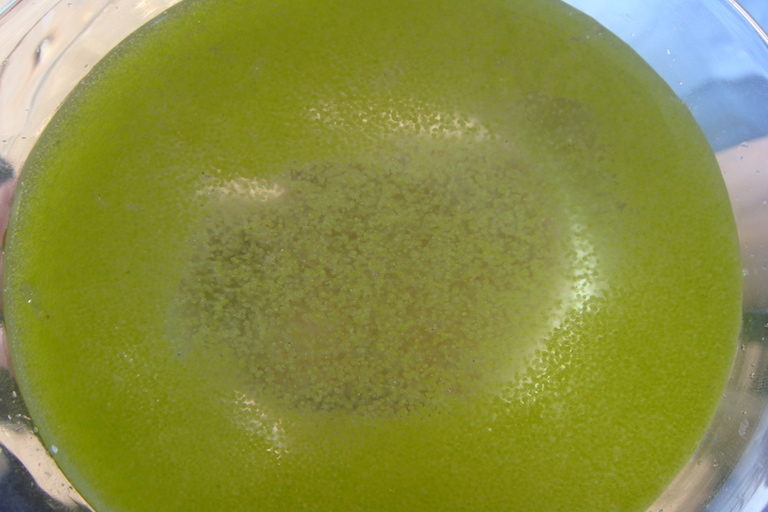 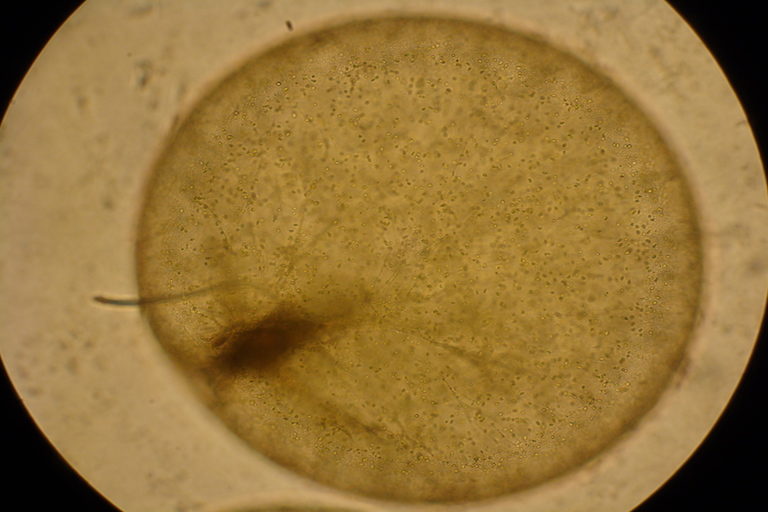 On Feb. 26, 2003, a group of scientists set out to sea from Goa, India, on a routine mission. They called it “sea truthing,” verifying data gathered by satellites eyeing the earth from hundreds of kilometers above.

What the team encountered there, in the middle of the Arabian Sea, was far from routine. About 970 kilometers (600 miles) northwest of Mumbai on India’s western coast, they found themselves sailing on a green swirl that spread out as far as the eye could see. At night, the waters glowed neon blue.

The light was emitted by millions upon millions of a strange single-celled organism: Noctiluca scintillans, or the sea sparkle. It had never been found in these waters in such abundance before. Despite its luminescence, the N. scintillans blooms are a harbinger of darker tidings, a paper published in Nature earlier this year warns.

The outbreaks occur every winter in the northern Arabian Sea, stretching from India’s western coast to the edges of the boot-shaped Arabian Peninsula. Scientists at Columbia University say they fear the rise of these blooms could herald massive declines in fisheries in the region.

“We are seeing an ecosystem shift in the Arabian Sea,” said Helga do Rosario Gomes, one of the study’s authors. “That can cause massive declines in fisheries and ultimately lead to the emergence of a dead zone.”

If the team is right, it would jeopardize the livelihoods of more than million fishers living in settlements sprinkled along the coasts of India, Pakistan, Iran, Oman and Yemen.

A plant and an animal

Gomes and her husband, Joaquim I. Goes, run a lab at Columbia University’s Lamont Doherty Earth Observatory in New York. For almost two decades, the couple has studied the sea sparkle blooms that have baffled scientists on at least three continents.

N. scintillans is a dinoflagellate: it has two strands of antennae-like flagella projecting from its cell membrane. They guide food to its mouth and help it to move. But when researchers first examined the cells closely in 2003, it was not the flagella that caught their attention.

A Noctiluca cell with green endosymbionts visible under a microscope. Image courtesy of Joaquim I. Goes.

The cellular tenants partly explain why the organism has proliferated in the Arabian Sea. N. scintillans grazes on other microorganisms like larvae, fish eggs, and diatoms. But the unicellular phytoplankton that live inside it can photosynthesize, turning sunlight into energy. They help their host cell survive even when food is scarce. It this sense, N. scintillans acts as both a plant and an animal.

Its robustness makes it a threat to fragile marine food webs.

“Noctiluca eats almost anything that comes its way,” Gomes said, “but as an invasive species, there are not many predators that feed on it.” It is not toxic itself, but the blooms can accumulate high amounts of ammonia, which can prove deadly when released into the water. This ammonia makes N. scintillans unpalatable for most creatures. Only jellyfish and salps are known to prey on it.

The diatoms it has displaced in the Arabian Sea are critical to the marine ecosystem. These single-celled algae ensconced in transparent silicate membranes come in thousands of exquisite forms. Their fragile beauty has even inspired its own genre of art. That, however, isn’t why their disappearance has scientists worried.

Diatoms in the sea, like plants on land, are at the bottom of the dietary pecking order. They are commonly found near the sea surface, drifting along with the currents. Zooplankton feed on the phytoplankton and are, in turn, food for larger organisms, including fish. N. scintillans can short-circuit the food web by consuming food that diatoms eat and also by eating diatoms themselves.

Instead of diatoms, the peculiar, practically inedible mixotroph now dominates this nook of the Indian Ocean in winter. The question is, why?

One of the keys to these mysterious blooms, Gomes and Goes believe, can be found thousands of kilometers away, in the upper reaches of the Himalayan-Tibetan Plateau. The region that straddles China and the Indian subcontinent hosts perennial glaciers and some of the world’s tallest snow-covered peaks, including Mount Everest. It is often called the third pole because it holds the largest ice mass after the polar caps.

But the Himalayan glaciers are shrinking rapidly, and this retreat has quickened in recent years. Since 2001 the rate of ice loss doubled compared to the previous 25 years, according to a paper published in Science. Up to two-thirds of Himalayan ice could disappear in the next 80 years if global temperatures rise by 1.5° Celsius (2.7° Fahrenheit) above pre-industrial levels, another study estimated.

This disappearing ice is creating conditions that are more favorable for N. scintillans, Gomes and Goes argue in their paper. During the winter monsoon season in the Indian Ocean region, cold, dry winds blow from the plateau toward the ocean. They cool the surface waters of the northern Arabian Sea as they sweep across it. Cooler water sinks and warmer nutrient-rich water from the seafloor replaces it, a process of convective mixing.

With diminished ice cover, the landmass is heating up more than usual, so winds blowing over the sea are warmer and less dry than before. This has weakened the convective mixing and disrupted nutrient supply to the sea surface, the study authors say. Green N. scintillans seems to thrive even when nutrients are sparse. The cells in Gomes and Goes’s lab were found to survive for almost a year in nutrient-poor waters without feeding on prey.

The researchers’ data also show waters with lower oxygen levels are favorable to N. scintillans. “Initially Noctiluca  are advantaged by the low oxygen conditions especially at depth where they reside when not in surface bloom forms,” Gomes said. “Low oxygen conditions are naturally not found at shallower depths as the atmosphere is full of oxygen. But then as stratification sets in,  the ability to survive and thrive in low nutrients conditions advantages it further.”

Not everybody believes that a lack of oxygen contributes to the organism’s success. Scientists at the Indian National Center for Ocean Information Services (INCOIS) and researchers at the National Institute of Oceanography in India have also been studying the blooms. “We looked at the oxygen data collected during our cruises and found that in the surface layer where the Noctiluca occurs, there is no limitation of oxygen,” said Satya Prakash, a scientist at INCOIS. He and his colleagues argued as much in a 2017 paper.

Nor are they convinced that the loss of ice on the Himalayan-Tibetan Plateau is behind the waning of the convective process. “We need more data to see if there is a linkage between the ice loss and the mixing,” Prakash said.

According to Prakash, the disappearing diatoms could be explained by the low silicate levels in the water. “We looked at the climatological data of silicate and nitrate. Silicate and nitrate are usually present in a one-to-one ratio,” he said. “If the ratio is less than one, it means there is less silicate.” This is hampering the growth of diatoms, which build their outer walls from silica.

Gomes said the absence of silica does not explain why other phytoplankton that do not require the mineral had not taken the place of diatoms. Prakash and his team are still  investigating why this would favor N. scintillans.

What they agree on is that the green sea sparkle is flourishing in conditions hostile to other plankton.

Red sea sparkles, minus their endosymbiotic helpers, may not be as sturdy, but they’re still prolific. Blooms are found throughout temperate to sub-tropical regions, with significant concentrations off the coasts of Central America, the Turkish Straits, Southeast Asia, and Europe.

Gustaaf Hallegraeff, a professor of marine science at the University of Tasmania, studies red N. scintillans blooms off the Australian coast. He said there was a clear climate change signal in the migration of the blooms southward from the Australian mainland toward Tasmania. The possibility of the blooms drifting further into the Southern Ocean that surrounds Antarctica worries Hallegraeff. It could pose a similar threat to diatom blooms there.

“It can be quite disruptive for the food web structure,” Hallegraeff said. He described the impact of N. scintillans blooms near shellfish farms: “The shellfish have to feed on phytoplankton, now the Noctiluca is feeding on the phytoplankton, and you start to see the shellfish die because they don’t have anything to eat.”

Studies on the relationship between the yearly Arabian Sea outbreaks and fisheries, however, are scarce.

Prakash said N. scintillans‘s cell size could play a part in how it impacts fisheries. “They are so big you can see the cells with your naked eyes,” he said. For a microorganism made of a single cell, that’s quite large. There are reports of N. scintillans cells suffocating fish by clogging their gills.

Gomes and Goes’s paper suggests the blooms may displace diatoms even in the summer months, which is bad news for a string of countries like Oman, Somalia and crisis-stricken Yemen.

It is yet another in a series of threats facing fisheries in the Arabian Sea.

On the sea’s Indian coastline, a way of life is in trouble. “The fishing community is drowning,” Naresh M. Gohil, a resident of Chimbai, said on a winter morning in 2015, when I visited the settlement in the state of Maharashtra. “I am the last generation of fishermen in my family,” he said.

But declines in fish catches call for richer explanations, the emerging research shows.

Industrial pollution and domestic sewage discharged into the sea by Mumbai is a leading cause for dwindling local fisheries, according to India’s Central Marine Fisheries Research Institute. Coastal megacities in India generate more than 6 billion liters (1.6 billion gallons) of wastewater daily. Overall, the country can treat only about a third of its sewage. That means billions of liters of untreated sewage are being flushed into the Arabian Sea every year.

The water body is believed to host the world’s largest dead zone, where the oxygen concentration is so low it is not conducive to life. Its waters are naturally sluggish, preventing oxygen mixing. Sewage and agricultural runoff dumped in the sea soaks up oxygen as it decomposes, creating zones where marine species struggle to survive.

Except, it seems, for N. scintillans. It doesn’t just fare better in oxygen-poor waters; the dense colonies it forms could be contributing to oxygen depletion. The outbreaks are expansive; in satellite imagery, they appear like spirals of oily green paint stretched across the entire northern Arabian Sea. When the N. scintillans cells die and sink into the ocean depths, their decay could be sucking more oxygen from deep waters that are already hypoxic.

A more stratified water column, skewed nutrient availability and oxygen loss all point to profound changes in the Arabian Sea. Scientists like Gomes and Goes see the sea sparkle blooms as not just a symptom of the changing environmental conditions, but as a trigger for disruptions yet to come.

Despite all the changes that Chimbai residents are witnessing, the sea remains a reassuring presence. They have a saying: “The sea keeps no secrets, it keeps nothing in its stomach.” It reflects a belief in the perpetual pristineness of the vast blue. No matter what humans throw at the sea, it remains unscathed.

That worldview could be upended at a time when human activities are transforming the seas in unprecedented ways.