GÄSTRIKLAND, Sweden — It’s just past 7 p.m. here in the woods along the eastern coast of Sweden. A handful of people are waiting, some of them for the past two hours, peering out from inside a small wooden cabin.

The cabin sits at the top of a hill and has sweeping views of the landscape around it. There are mosquitoes to contend with, but the visitors have to sit still and keep any talking to a whisper. Outside, the tall conifers are completely still, but there’s the occasional flash of life: a woodpecker tap-tap-tapping at a trunk, a jay sweeping in for the seeds in a feeder, and a squirrel foraging among the mossy rocks below. A young buzzard suddenly appears and snags a piece of meat from among the rocks and disappears again, all within the blink of an eye.

The meat, like the seeds in the feeder, has been left there to attract the wildlife. In this case, one of the more elusive inhabitants of the forest: brown bears. Sweden is home to about 3,000 bears in the wild, and Gästrikland has among the highest densities of the animal. “The bears are the ghosts of the forests,” says Vanessa Vogel, a visitor from Germany who’s waiting in the cabin for a glimpse of the animal. “They will show up when you least except it.”

Ten p.m. comes and goes, and then, with no notice — without the slightest sound — there they are: on the path to the cabin, a full-grown female bear and her two cubs. They’re bathed in the shimmering blue light of the Swedish summer night, and they move carefully, deliberately. They’re drawn to the rocks, just 20 meters (66 feet) from the cabin. The mother bear starts rooting around for the meat, but all the while she’s got an eye trained on her two cubs, tumbling playfully around the undergrowth. It’s easy, in this moment, to acknowledge the long-held reputation that mother bears have for being fiercely protective of their young.

The family of three eventually moves on, blending back into the forest. Not long after, two more bears emerge. One of them, a young male, rubs his back against a tree trunk. “Just like Baloo,” Vogel whispers. 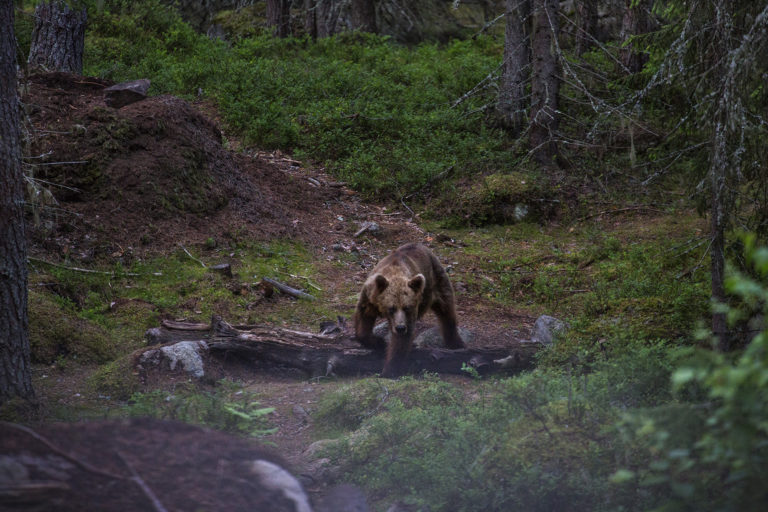 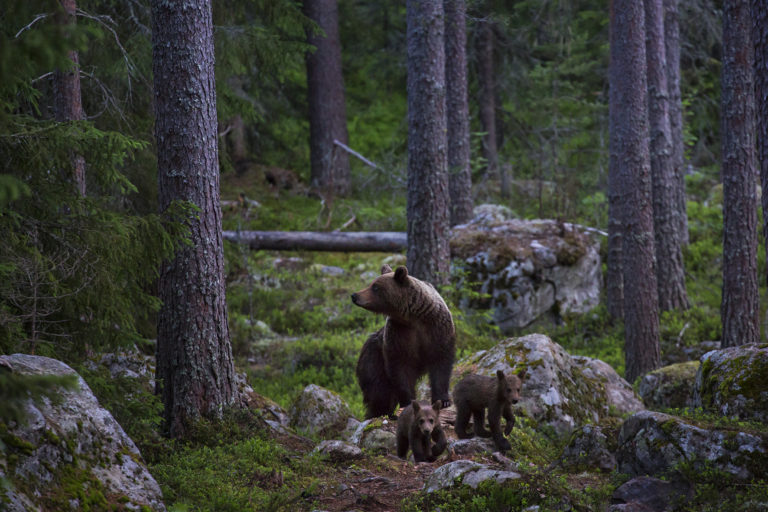 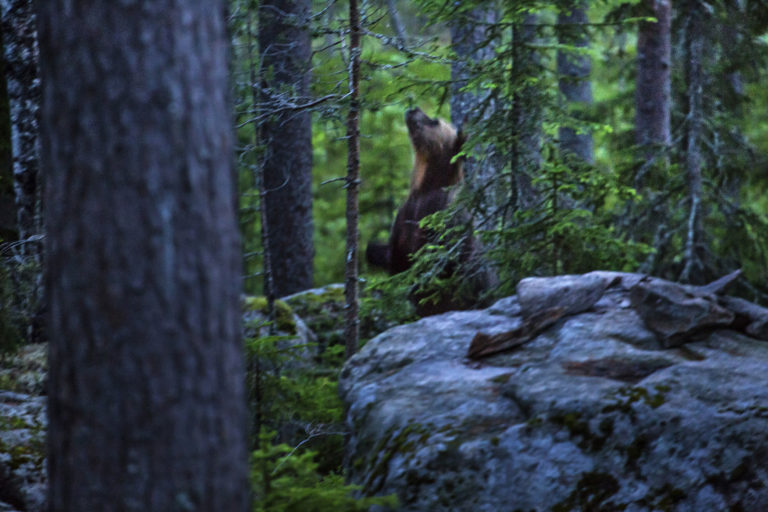 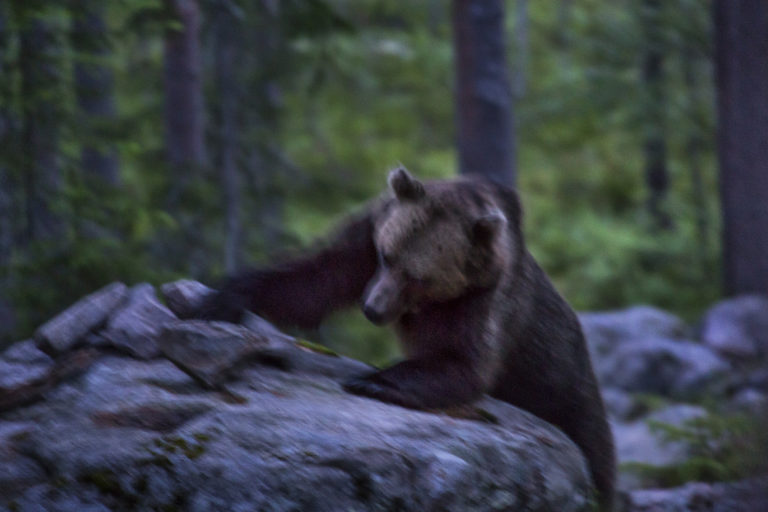 Semi-darkness sets in at around midnight, but sunrise is only a few hours away. Soon, a new day will dawn.

The brown bear (Ursus arctos), or grizzly as it’s known in North America, has a fearsome reputation across its range, where it’s often blamed for preying on livestock and attacking humans.

Sweden had an estimated 1,650 bears in the mid-1800s. But hunting, encouraged by the state through the offer of bounties, pushed the population to about 700 by the mid-1990s, according to a study. More restrictive hunting policies since then, including a ban on killing mother bears with cubs, have seen the bear population flourish. (A 2018 study suggested that female bears were adapting to this loophole by keeping their cubs with them a year longer than previously.)

While hunting is still permitted in the summer months from late August to mid-October, there’s growing social awareness that bears aren’t the fearsome predators they’ve long been made out to be, and are instead shy animals that will avoid humans as much as possible.

Now, much of the tracking and shooting of bears in Sweden is done with cameras, not guns. A thriving ecotourism industry has grown around not just brown bears, but also other wildlife species that were previously nearly wiped out before making a recovery.

Beavers were at one point actually extinct in Sweden, hunted for their fur, which was used to make hats, and for their castoreum, a glandular oil secreted from the base of their tails that was believed to have medicinal properties and was used to make perfumes. The Eurasian beaver (Castor fiber) was reintroduced into Sweden in 1922, and today thrives in the wild, where its presence has a beneficial effect on other wildlife; a 1999 study found that brown trout in beaver ponds tended to be bigger, and that the ponds also served as an important habitat for the fry of smaller fish.

“They are an important species,” says Simon Green, who works for the ecotourism operator WildSweden. “Biodiversity among birds and insects actually increases by 30% when beavers flood an area, since the dead wood attracts insects and birds.”

Another, much more elusive, animal on Sweden’s wildlife ecotourism circuit is the Eurasian lynx (Lynx lynx). It, too, was hunted close to extinction, before changes to hunting regulations helped it recover. Among these is a compensation scheme under which the country’s Indigenous Sámi reindeer herders receive a payment for each carnivore cub reported in their grazing areas, including lynx. The idea is that the money should compensate for any expected loss to the reindeer herd caused over the lynx’s lifetime. Today, Sweden’s population of Europe’s biggest wild cat stands at about 1,500.

The Eurasian elk (Alces alces), or moose in North America, is Sweden’s national animal, and a mainstay of both the hunting and wildlife tourism industries.

The country has 400,000 elks, the highest density of any country in the animal’s range. About a quarter of them are killed during the annual hunting season every autumn; by late spring, a similar number of elk calves are born.

Swedes are largely accustomed to seeing elk in the wild — about 6,000 of the animals are killed in traffic accidents every year — so the ecotourism circuit draws mostly visitors from outside the country. Recently, though, with growing anxiety about climate change and the COVID-19 pandemic, a growing number of Swedes are choosing to holiday at home and experience their country’s wildlife for themselves.

“The moose is a strong trademark, and many visitors are curious about the Swedish taiga,” Green says. “We are fortunate with an incredible nature, and with a higher number of mammals and birds than most people are aware of.”

The wolf in the room

While social acceptance of carnivores like lynxes and wolverines is widespread, there’s another animal that has a far more polarizing effect on Swedish society.

There are an estimated 250-300 Eurasian wolves (Canis lupus lupus) in Sweden today. (The number varies because many of the wolves frequent neighboring Norway and may be counted in that country’s population.) Like bears, they were hunted for centuries, often with the state offering a bounty for each kill. By 1966, they were extinct in Sweden. Then, in the late 1970s, a handful of the animals found their way back to the country from a pack in the Russian-Finnish population. Today, licensed hunting of wolves is permitted, but the government sets a strict quota each year.

Marcus Eldh, the founder of WildSweden, says he’s been bringing visitors on wolf-spotting tours since 2007 in the forests of the Bergslagen region. He says that allowing legal hunting of wolves fuels demand that can lead to illegal hunting.

“Suddenly everybody talks about hunting wolves,” he says. “The Finnish wolves also decreased in numbers when Finland opened up the legal hunt.”

He acknowledges that no other animal evokes such polarizing feelings among people: “It’s a mythical animal.”

Symbol of the wild

Bergslagen has the highest density of wolves in Sweden, about a third of the population, which makes the issue among residents here much more complex.

“They just don’t think that the politicians in Stockholm or Brussels show consideration to local people,” Eldh says. “The ordinary people feel left out of decision-making.”

He says he tries to get locals invested in the welfare of the wolves by engaging them as much as possible in his ecotourism operations.

“I order locally produced food and firewood. The guests stay at local hostels and we use local guides. These actions have a positive effect on the villages,” Eldh says.

He adds this has translated into a change in the mindset of the local community, from one that was leery of the wolf safaris to one that’s now more positive.

For Eldh and others in Sweden’s ecotourism industry, the return of iconic megafauna that were either extinct or nearly wiped out is something they see holding steady for the long term.

“The curve points upwards in Europe for all of our four big predators” — bears, wolves, lynxes and wolverines. “People don’t depend on domestic livestock to the same degree as before,” Eldh says, “so I am convinced that the predators will do fine.”

The wolf, in particular, will continue to be a top draw, he says. In his 13 years leading tours to catch a sight of the animal, he’s only seen about 25 different individuals. Listening to the animals howl, he says, still gives him goose bumps.

“It’s a much cooler thing than to just get a glimpse of them,” Eldh says. “To me, they are a symbol of the wild.”