Bailique: Why these islands in the Amazon Delta are falling into pieces 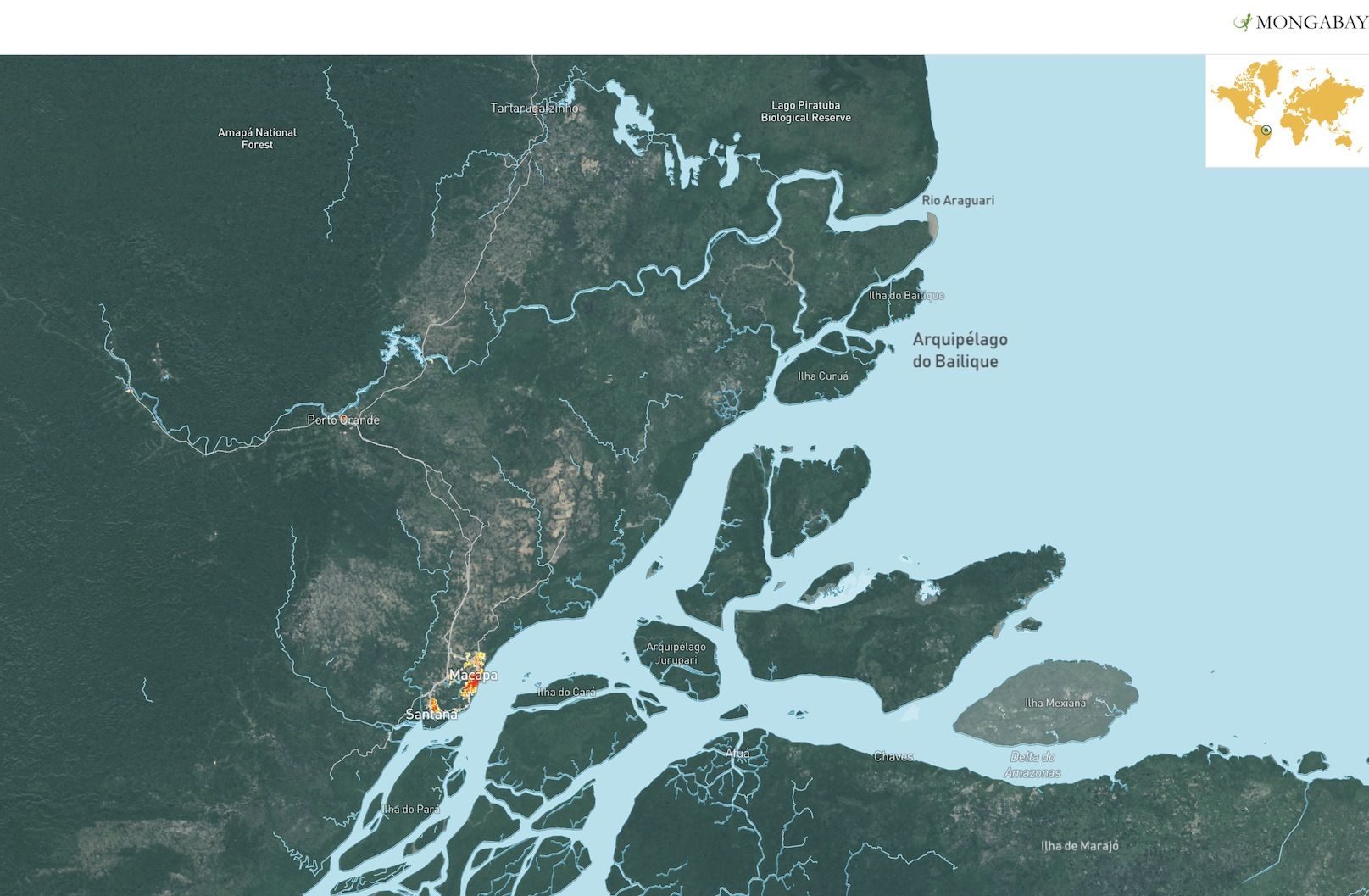 The Bailique Archipelago is located at the mouth of the Amazon, where the mighty river meets the Atlantic Ocean in the Brazilian state of Amapá. It comprises eight estuarine islands that are home to about 13,000 people, coexisting with the dynamics of the surrounding lowland forest. But the balance between these communities and the environment, where small-scale fishing and sustainable management of açaí palm are the main income sources, has been deeply shaken by progressive erosion and riverbank failure.

Known locally as “fallen earth,” such destruction affects homes, schools, power lines, water treatment plants, and the very survival of riverine communities and the ecosystem where they have lived since the 19th century. At the heart of the problem is the Araguari River, which drains just north of the archipelago and was long famed for its tidal bore, known here as pororoca — a phenomenon in which ocean tides push back against the mouth of the river, sending water surging upstream and creating the kind of waves surfers dream of.

But the pororoca, once one of the strongest in the world, came to an end in 2013. The mouth of the Araguari had been silting up at an intense rate, and the decline in the flow rate diverted the tidal bore to a secondary river. The story made the headlines, but it was only the first in a series of events that make up one of the worst environmental disasters in the state of Amapá — and one that continues to unfurl.

The basin drained by the Araguari covered one-third of the state’s land area, but has now been subsumed into the Amazon basin. A 600-meter (1,970-foot) stretch along the Araguari’s mouth, where the pororoca used to generate massive waves, has been turned into pasture. Now, buffalo ranchers bicker over the land, which is ostensibly state-owned, in an attempt to claim ownership and expand their properties.

Researchers say that pastures formed to raise buffaloes have accelerated silting in the Araguari River. Image by Mauricio de Paiva.

Two canals, the Gurijuba and the Urucurituba, are responsible for essentially bleeding out the flow of the Araguari to the Amazon, according to Valdenira Santos, a researcher at the Amapá State Institute for Scientific and Technological Research (Iepa) and a professor at the Federal University of Amapá (Unifap). They’ve grown progressively wider and deeper, to the point that they connected the Amazon and Araguari basins, which used to meet up only during the wet season

“A series of causes combining natural events and anthropic action expanded the streams,” Santos says. “Flooding caused by rising water levels in the Amazon and Araguari rivers, high equinox tides, heavy rains intensified by La Niña” — the climate pattern that results in cooling of Pacific Ocean waters — “and countless furrows opened by buffaloes’ trampling and by local farmers themselves.

“All these factors combine during the wet season, and these human interventions end up accelerating the process a lot, especially in small uneven parts of the plain where the water flow advances even more,” Santos says.

The Urucurituba channel, or Varadouro de Urucurituba, is 300 meters (980 feet) wide where it meets the Araguari, and drains 70% of the water that would otherwise flow out to sea. The other 30% is drained by the Gurijuba canal, located 60 kilometers (37 miles) upstream. The Urucurituba drains so much of the Araguari’s water that it registers a flow rate of 8,000 cubic meters per second (2.1 million gallons a second), which it channels to another tributary, the Cubana canal. This passes in front of the communities of Vila Progresso and Macedonia, where the sheer volume of water is eroding away at the ground at a rate of 10 meters (33 feet) per year.

Alcindo Bajo Farias, a former community leader known as Chinoá, lives in Vila Progresso. He says many members of the community have moved to the state capital, Macapá, 180 km (112 mi) away, a 12-hour boat trip up the Amazon River. “I saw several houses leaving through the canal. Some people have rebuilt their homes more than three times,” he says.

Chinoá says the Bosque School, the only one that provides secondary education in the Bailique Archipelago, has seen almost half of its area destroyed by the erosion. The school had earned a reputation for its innovative educational model in which nature is the basis for teaching classroom content. Two other schools in the archipelago are also at risk of collapsing.

Electricity shortages are also a major problem. “Usually, we don’t even have 10 days of power a month,” Chinoá says. “The poles fall with erosion, and the company in charge has few employees to reinstall them. Without electricity, we can no longer keep the fish and açaí in the fridge.”

The erosion of the archipelago’s shores has knocked down several buildings, including houses, schools and electricity poles. Image by Mauricio de Paiva.

Chinoá, who worked as a fisherman for decades, says the flow rate of the Araguari River began to decrease in 1976, following the construction of the Coaracy Nunes dam, the first hydroelectric plant built in the Amazon. When the Ferreira Gomes dam was built in 2014, the flow trickled to a virtual halt, insufficient to remove the silt washed upstream by the pororoca. Three years later, the coup de grâce to the Araguari came with the third dam: Cachoeira Caldeirão, built in 2017.

Chinoá says the sea now enters the archipelago through the Marinheiro River; the water is salty when it reaches the communities to the south. “The water treatment system cannot supply the entire population and the government says it has no funds to expand it,” he says.

João Paulo Monteiro, the technical operational director of the Amapá Water and Sewage Company (Caesa), says the company has four water treatment plants serving the four main communities of the Bailique islands, or 60% of the population. The other residents live in communities whose remoteness makes investing in clean water infrastructure there impractical: the company, Monteiro says, would not be able to collect money from that population. “Larger investments will only be possible when researchers understand the phenomenon,” he told Mongabay.

Geova Alves, the president of the Association of the Bailique Archipelago Traditional Communities (ACTB), disputes that the residents are a financial lost cause. He points out that the association was the first in Brazil to receive a certificate for socioenvironmental management of açaí palms. But he says he’s also concerned about the decline in fishing and the loss of land due to riverbank erosion. “With the closing of the Araguari River, freshwater fish are decreasing a lot here. Some producers lost their entire açaí groves. Soil degradation has increased dramatically in the past three years.”

The geomorphological and hydrodynamic changes in this estuarine zone in northern Brazil — where river mouths close, open and move — are natural phenomena that take place over a time scale of thousands to millions of years, says Santos. She cites the case of estuary upstream of the Cunani River, near the municipality of Oiapoque, which stopped draining out 3,000 years ago as a result of a geological process of material accumulation. A similar situation is playing out at the mouth of the Araguari, but it’s being artificially accelerated. The system is likely to collapse in less than 50 years, Santos says.

“The construction of three hydroelectric plants in five decades cannot be ignored,” she says. “I used to sit on the state water resources council when they were discussing the construction of the Caldeirão dam. We warned them that there should be no further intervention on the river, which was already weaker, but I resigned when I found out that the studies used in the terms of reference ignored the coastal zone’s dynamics and its influences on sediment deposition. They went ahead with the project without considering that it was an estuary area.”

Alan Cunha, a professor of civil engineering at Unifap, says that in addition to constricting the flow of water — thus creating erosion and sedimentation — the dams don’t comply with a 2000 federal law on downstream accountability. “These projects are only concerned with the upstream area and the safety of their reservoirs where energy is generated. What happens downstream is nobody’s concern,” he says. “Watershed management should include all actors involved. There is no research because there is no monitoring, which would take investment. And if there is no monitoring, there is no transparency when disclosing data.”

Mongabay sought comment from the state utility, Amapá Energy Company (CEA), but did not receive a response by the time this article was published.

Due to silting in the Araguari River, just north of the archipelago, fishermen have seen a decrease in freshwater fish in the region. Image by Mauricio de Paiva.

The mismanagement of the Araguari River and the Bailique Archipelago has now come before a court. “We filed a public civil lawsuit in a federal court to know the influence of dams and buffalo ranches with no proper management on silting up the mouth of Araguari River,” says Marcelo Moreira, an environmental prosecutor for the state of Amapá. “Iepa helps us a lot, but they are underfunded, and the studies are still inconclusive.”

Moreira says he’s cautious about producing evidence and holding those involved accountable, citing the state’s inaction and land issues as barriers. “There is no legal framework regulating buffalo ranching,” he says. “The state environment council is trying to set rules for livestock, but they end up not enforcing them. In addition, when we try to hold some property accountable, we find it difficult to identify its owner, since there is a lot of public land occupied.”

Patrícia Pinha, head of Lake Piratuba Biological Reserve, on the left bank of the Araguari, points to buffaloes as the biggest problem. “The biological reserve is a fully protected area — Brazil’s most restrictive type of conservation unit — but we have 18,000 buffaloes here,” she says. “They dig furrows that later widen and deepen, and all the water in the lowland field is being drained into those furrows. Wet areas used to be flooded all year round, even in the dry season, but now they only fill during the wet season. When it stops raining, everything dries up quickly, even the lakes. With the drought, fires have become more and more frequent and harder to control.”

And through no fault of their own, the riverine communities who have lived here sustainably for more than a century are now being pushed out by the ranchers, Pinha says. “They use extensive cattle ranching to occupy public land,” she says. “And few families live in those areas, while traditional communities, which are already suffering from the erosion of their lands due to environmental degradation, lose even more space with the increasingly close presence of big landowners.”

Banner image of the ruins of a building collapsed by riverbank erosion, by Mauricio de Paiva.

This article was written in partnership with Ambiental Media.