by Malavika Vyawahare on 3 August 2020

When searching for mouse lemurs in Madagascar’s forests, scientists seek out their gleaming eyes in the dark. Their eyes are large for an animal about the size of a fist and no heavier than a tennis ball. Mouse lemurs are shy and nocturnal, and unlike in the movie named for the island, they’re generally not boisterous dancers who like to “move it.”

Now, a new species of mouse lemur, considered the tiniest primates in the world, has revealed itself to scientists: Microcebus jonahi.

Ute Radespiel at the University of Veterinary Medicine Hannover in Germany has studied these elusive creatures for 25 years. A team led by her and Dominik Schüßler at the University of Hildesheim named the lemur for prominent Malagasy primatologist Jonah Ratsimbazafy, who has dedicated his life to studying and protecting Madagascar’s endemic lemurs.

Keeping lemurs, all 108 known species of them, from the abyss of extinction is a mammoth undertaking. Almost all lemurs are at risk of dying out, and a third are already critically endangered, according to the IUCN. A cousin of the newly discovered M. jonahi — Madame Berthe’s mouse lemur (M. berthae), the world’s smallest primate — is one step away from extinction.

M.jonahi may be staring at the same fate. “Although the Jonah’s mouse lemur has only just been scientifically described, it is unfortunately already in danger of extinction,” Radespiel said. It’s a worry echoed by other scientists who fear some of Madagascar’s unique flora and fauna will be wiped out before the full richness of the island’s biodiversity is laid bare.

Describing a new species is no mean feat. A team of 29 scientists from six countries contributed to the identification of the new lemur species. Distinguishing one mouse lemur from another is more than just catching a break and trapping a hitherto unidentified organism. Most mouse lemurs are not readily distinguishable at sight, given their petit stature and nocturnal nature.

When the first individual of M. jonahi was caught for sampling, back in 2006, it was let go without being identified as a different species. After sifting through the literature about the existing mouse lemur species, and trapping and studying 117 animals, the researchers zeroed in on the as-yet-unknown. In the last few years, the effort picked up pace as more information about the lemurs’ genetic signature was gleaned from samples collected over 10 years.

The findings, including an analysis of mouse lemur species in northeastern Madagascar, were published in the American Journal of Primatology and Systematic Biology on July 27.

In the early 1990s, only two species of these critters were known; by 2016, that number had grown to 24. It stands at 25 today. However, the rush to find new species has sparked some debate about whether there is enough evidence to justify the classification of some mouse lemurs as distinct species.

“From the late 1990s to today, there were a plethora of new studies describing new mouse lemur species. Those species were mostly defined based on genetic evidence from mitochondrial DNA,” said Gabriele Sgarlata, a population geneticist at the Instituto Gulbenkian de Ciência in Portugal. “There are also scientists looking at the primates and lemurs more from a morphological point of view.”

The newly described species is relatively bigger than an average mouse lemur. It has a reddish-brown body, small ears, thick fur, and a conspicuous white stripe that runs between its eyes and disappears at the forehead.

Part of the problem with making an airtight claim to a new species is that there are more than two dozen definitions of what a species is. When it comes to defining species, looks — the morphology — aren’t everything. In fact, in some cases, looks can be deceptive, as is the case with mouse lemurs, a cryptic species.

To show that two groups of organisms are distinct both genetically and in their physical characteristics is considered more solid grounding to declare a new species. The new study includes evidence of both, said Sgarlata, who was not directly involved with the study but is a doctoral student under one of the co-authors. “This study, unlike previous ones on mouse lemurs, has used a large amount of genomic data, not only mitochondrial DNA, which makes their findings more robust,” he said.

The research also suggests that two other previously described mouse lemurs, M. mittermeieri and M. lehilahytsara,  may not be separate species after all. Sgarlata says he believes further research may lead to a shortening of the list of mouse lemur species, even as new ones will continue to be uncovered from Madagascar. Remote and inaccessible forests have made inventorying of species from Madagascar an arduous but necessary task.

Adding urgency to that effort is the fact that many of Madagascar’s forests are disappearing rapidly. The country lost about 45% of its forests between 1953 and 2014, with deforestation accelerating between 2005 and 2014. Mouse lemurs are found across the island, but most occupy niches, which makes them especially vulnerable to habitat loss.

M. jonahi is believed to only occur in a small swath of lowland rainforests in northeast Madagascar, in the Mananara-Nord National Park, and a community-managed forest surrounding the village of Ambavala. The area spans about 1,500 square kilometers (580 square miles), half the size of Yosemite National Park in the U.S.

The lowlands are also some of the most densely populated parts of the country, and communities depend heavily on forests. Woodland is routinely cleared to grow food and graze cattle, and trees chopped to make charcoal and for construction. “Whenever local resources are gone, when the forests are gone, the species is doomed to extinction,” Radespiel said.

The forested area in the region where M. jonahi is found is undergoing massive deforestation, according to a paper co-authored by Schüßler and published earlier this year. In northeast Madagascar, forest cover declined from 12,039 km2 (4,650 mi2) in the early 1990s to 7,501 km2 (2,900 mi2) in 2018. Once an uninterrupted stretch of rainforest, it has been whittled down to fragments. The fragmentation is expected to intensify, stranding the mouse lemurs, curtailing their access to food, and narrowing their genetic diversity. 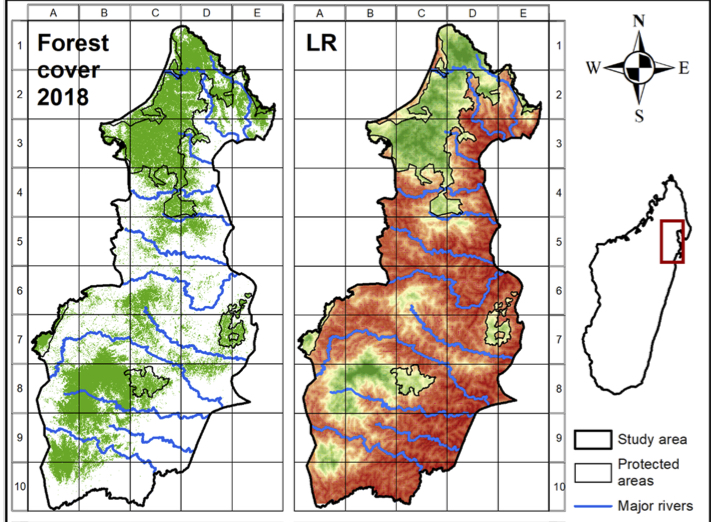 Ratsimbazafy said he was thrilled to have the lemur named after him but worried about its future. “This is good news during a bad time. The pandemic is making things tough.”

The COVID-19 crisis has brought much misery to Madagascar. The country has more than 10,000 cases and more than 100 deaths. The economic toll is expected to deepen the pain. Poverty rates, already at 75%, are expected to rise. The ripples are already being felt in the conservation sector. Ecotourism has taken a massive hit, field activities are stalled, and monitoring of environmental crime is proving challenging. The economic toll is likely to put more pressure on the forests, conservationists are warning.

The pandemic has also hampered research, with fieldwork at a standstill. For the new study, the group had only collected samples from the lemurs caught in the field but did not bring back a type specimen of M. jonahi.

“Although not being a standard procedure, this method is most appropriate for endangered primates that should not be prematurely sacrificed if the taxonomic assignment is not yet clear,” the study authors said. The animal was to be captured during a field trip this September and housed in the Museum of the Zoology Department of the University of Antananarivo.

The general public will have to wait a while longer to catch a glimpse of Jonah’s mouse lemur.

Schüßler, D., Blanco, M. B., Salmona, J., Poelstra, J., Andriambeloson, J. B., Miller, A., … Radespiel, U. (2020). Ecology and morphology of mouse lemurs (Microcebus spp.) in a hotspot of microendemism in northeastern Madagascar, with the description of a new species. American Journal of Primatology. doi:10.1002/ajp.23180