A total of 227 fires covering 127,866 hectares (315,963 acres) — an area nearly twice as large as New York City — were reported between May 28 and August 10. The number of fires is increasing as the region enters the peak fire season, according to an analysis of satellite data by the Monitoring of the Andean Amazon Project (MAAP).

More than 220 of those observed between May 28 and August 10 occurred in Brazil, with just six in Bolivia and one in Peru. Over 95% of the Brazilian blazes were illegal, violating the nation’s 120 day fire ban enacted by President Jair Bolsonaro on July 15. The illegal blazes are occurring despite the advance deployment of the Brazilian Army to the Amazon in May to prevent fires being set.

Cartography by Willie Shubert in collaboration with InfoAmazonia.org

Only two of the reported blazes were confirmed forest fires, covering 1,447 hectares (388 acres) in Brazil. The rest took place on lands cleared of forest in the past two years, underscoring the significance of deforestation as a catalyst for fire in the Amazon.

“We argue that the central issue is actually deforestation and [that] the fires are actually a smoking indicator of this forest loss,” the report states.

The Amazon fires that garnered international attention in 2019 were not acts of nature, but generally followed a pattern of deforestation, with the blazes set by farmers, landowners and land grabbers as a means to convert cleared forests into pasture and croplands.

Last year, MAAP analyzed archived satellite imagery from Planet Explorer, and discovered that many of 2019’s fires burned areas deforested earlier that same year. Based on that finding, MAAP predicted 2020 fire locations would follow suit, occurring in areas that saw major deforestation earlier this year. Currently, four of the seven areas MAAP predicted would burn in 2020 have, according to Matt Finer, senior research specialist and director of MAAP.

This week, President Bolsonaro denied both this year’s fires and 2020 deforestation in remarks during the second Presidential Summit of the Letícia Pact for the Amazon. “There is no fire outbreak, not a quarter of a hectare was deforested,” Bolsonaro said. “It is a lie, this story that the Amazon burns with fire.”

The latest data released by INPE, the country’s National Institute for Space Research, found that 9,205 square kilometers — an area about eleven-and-a-half times as big as New York City — were deforested in the Brazilian Amazon over the past 12 months, an increase of 34.5% over the comparative period in the previous year. The official annual estimate of deforestation between August 1, 2019 and July 31, 2020 is expected to top 11,000 square kilometers when it is released this fall. 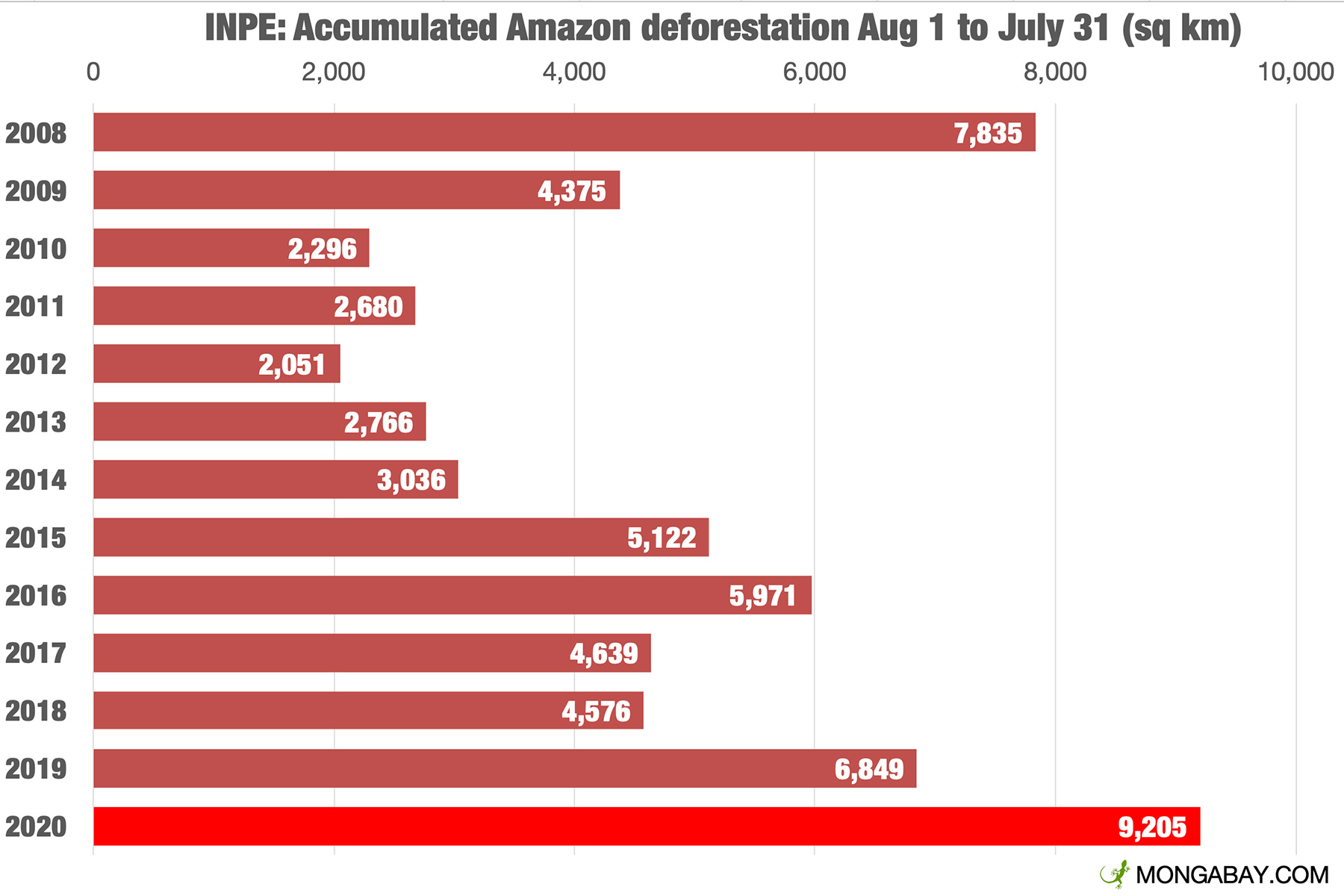 MAAP monitors fires in the Amazon in near real time, using the Real-time Amazon Fire Monitoring app to pinpoint areas with elevated aerosol emissions, caused by large amounts of biomass burning. A “major fire” is defined as one with an aerosol index of  >1 (appearing cyan-green to red on the app). Once an alert is detected, MAAP analyzes high resolution satellite imagery to confirm the fire. MAAP also compares satellite imagery from year to year to determine if the fire broke out following a recent deforestation event. This measure is different than the widely reported “hotspots” from satellites, which already number in the tens of thousands this dry season.

“We go two steps further than the commonly reported (and often misleading in my opinion) heat-based alerts, to much more precisely track major fires,” Finer said.

Both NASA and INPE, Brazil’s national space research institute, use satellites with infrared “heat-sensing” technology to detect hotspots. These may have a limited capacity to detect smaller fires and sub-canopy fires, which can be substantial in tropical forests.

In Brazil, 14 of the reported 2020 fires arose within protected areas. The most heavily impacted are the Jamanxim and Altamira National Forests in Pará state — conserved areas notorious for criminal land grabbing and illegal deforestation.

The Jamanxim National Forest was hard hit by deforestation in 2019, losing more than 3% of its forest cover in May 2019 alone. Those living in the area say Bolsonaro’s anti-environment rhetoric has emboldened land speculators and loggers to clear the protected lands and sell the property to ranchers at inflated rates. While sometimes prosecuted for these violations, most law breakers never pay their fines, and the government — under the Temer and Bolsonaro administrations — periodically has issued or urged amnesties to illegal deforesters and land grabbers.

The Altamira National Forests, home to the giant otter (Pteronura brasiliensis), Amazonian manatee (Trichechus inunguis), and the jaguar (Panthera onca), saw an 85% rise in deforestation in 2019 over the prior year. Illegal tin mining, gold mining, logging, and cattle ranching have escalated deforestation in the protected area.

“We emphasize, however, that these fires [in Jamanxim and Altamira National Forests] were burning recently deforested areas, not [naturally occurring] forest fires,” says the MAAP report, “and so, again, the primary issue is deforestation.”

Liz Kimbrough is a staff writer for Mongabay. Find her on Twitter@lizkimbrough. Mongabay contributor Jenny Gonzales provided additional reporting for this story.