In Brazil, human action and climate change are drowning a community

by Rafael Duarte on 18 August 2020 | Translated by Roberto Cataldo

For more than 50 years, the sea has been eating away at the coastal community of Atafona in São João da Barra municipality, in Brazil’s Rio de Janeiro state. For the residents, waiting for a solution, the future is uncertain.

Atafona is experiencing one of Brazil’s worst coastal erosion disasters. Experts cite a range of drivers for the phenomenon, including human action and the effects of climate change on a coastal area whose occupation has always lacked planning.

The first reports about the problem came in 1954, on the island of Convivência, which has now been virtually swallowed up by the sea. Its residents were forced to leave their homes for the mainland.

Five years later, the erosion reached Atafona Beach, across the water from their former island home. The destruction escalated in the 1970s and never stopped. According to the São João da Barra municipal government, the rising sea has destroyed some 500 homes and businesses. Residents and researchers estimate the figure may be higher, and that more than 2,000 people may have been forced to move, some as far as other cities or states.

Sônia Ferreira, who has lived in Atafona for more than two decades, watched the sea slowly approach until it brought down the wall around her home in March 2019. That was crucial in her decision to take action after years of waiting. “Last year, the sea reached my street and knocked down my wall. I had to put barriers because I want to continue living here for a while. I’m already taking the house apart and I’ve moved to a smaller one I built in the back, so I can stay on my land for a few more years until the sea takes over everything,” she says.

Worldwide, the number of people displaced by environmental factors — such as coastal erosion, forest fires, floods, and landslides — exceeds displacements caused by internal conflicts. According to the International Organization for Migration (IOM), environmental disasters caused 295,000 new displacements in Brazil in 2019.

But that figure only accounts for disasters resulting from isolated events such as floods, landslides and storms, and not for gradual processes like the erosion eating away at Atafona. Last year, according to data from the Internal Displacement Monitoring Center (IDMC), 240 Brazilians were forced to move due to coastal erosion; it’s likely the number is underreported.

Why the sea is gaining ground

One of the main drivers of the coastal erosion in Atafona is the Paraíba do Sul River’s lower water flow and silting caused by upstream dams. That’s allowed the Atlantic Ocean to encroach further into the mouth of the river, impacting current flows, sand and mud accumulation on the riverbed, and wave movement on the beach.

The destruction of riverside forests along the entire length of the Paraíba do Sul would also have contributed to silt building up in the river. The increase in population in surrounding cities, such as Campos dos Goytacazes, home to half a million people and located 40 kilometers (25 miles) from Atafona, is also a factor, as they draw water from the same source.

Slow-moving natural geological processes are also believed to be among the factors, but researchers and residents generally agree that the rate of coastal erosion has accelerated as a result of a combination of human action and effects of climate change such as rising sea levels.

Cartographic engineer Gilberto Pessanha Ribeiro, head of the Coastal Dynamics Observatory at the Federal University of São Paulo (unifesp), has studied the Atafona case for 17 years. He says more people have to look into the subject. “We have made fantastic discoveries about the diversity of views on the phenomenon within the community. Anthropological issues also emerged. That is a coastal area where science, affection, mysticism and religion mix together. People love that place. There is a lot of affection involved. Atafona has become a character,” he says.

“People want absolute answers, but this is a very complex topic for a simple answer with definitive alternatives,” Ribeiro adds. “It is caused by a combination of factors. And the solutions must also be multiple. Today, the idea is to coexist with the problem and learn scientifically in order to educate the population and develop knowledge in the area, rather than having a final solution.”

In a recent development, a canal at the southern part of the river’s mouth was closed due to silting, impacting the local small-scale fishery and endangering the livelihoods of the traditional community.

While the coastal erosion has been going on for more than half a century, most people know relatively little about it, considering its relevance. Residents say government actions at all levels have always been lacking. They’re now pushing for the government and institutions involved to take action, even though there is no clear or quick solution to the problem in the short or medium term.

In 2016, when I started researching for the documentary O avanço (The Advance), now in production, I spent a few days in Atafona with a local team to record the situation at that point and planned to return a few years later to finish the film. The photo and video images that illustrate this article were produced at that time, revealing some buildings, houses and places that no longer exist or have changed. Those scenes symbolize the power of continuous degradation resulting from the sea that advances about 3 meters (10 feet) a year.

For geographer Dieter Muehe, one of Brazil’s leading experts on coastal erosion, the advance of the sea is not only a reality but also a trend. “Atafona is a hotspot for an ongoing trend. Beaches gain and lose sediment, but there is no balance in Atafona. The beach near the river mouth loses more than it gains, which causes erosion,” he says. “And the mud also prevents sediment mobilization on the seabed. The river does not throw as much sand into the sea as it should. With the dams, there are no more exceptional floods expelling large amounts of sand onto the platform. Climate change accelerates the erosion process, as it influences the frequency and intensity of more extreme surges and storms.” 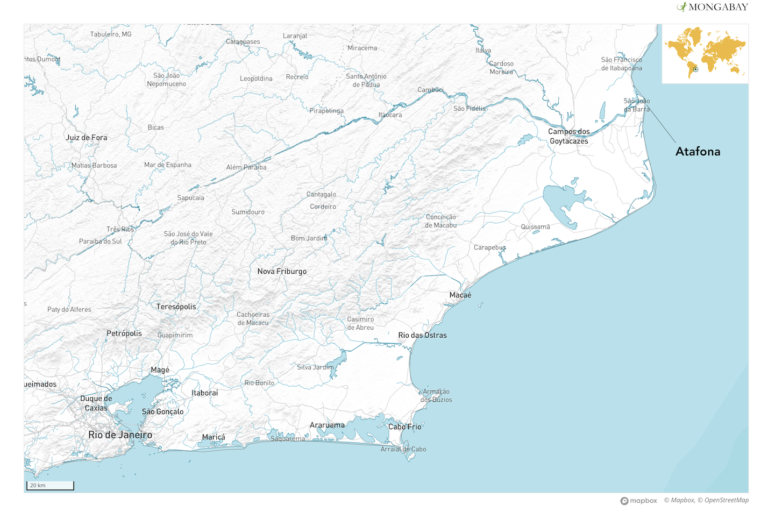 Muehe says the most noticeable effects of coastal erosion for the Brazilian population occur in urban areas, because of the property damage they cause. “The advance of the sea is a trend. The sand barrier had been slowly and imperceptibly approaching the continent for centuries. Now the effects of human actions on the environment are speeding up this process. It is so fast that humans can see it during their lifetimes. Perhaps a person who lives in a more vulnerable area on the coast will be able to spend his or her life in that house, but it may not be there for the next generations,” Muehe says.

This is what happened to local journalist João Noronha. In 2006, the sea took over the house he had inherited from his family. He has written two books on Atafona and has a third one ready for printing. “In the 1940s, Atafona was known as a medicinal beach resort. In the 1970s, it became fashionable, with balls that gathered Rio de Janeiro’s elite in big clubs,” he says. “At first I was reluctant to touch the subject of erosion in the newspapers for which I wrote. I felt a certain sentimental block as a result of the trauma of losing my family’s home. Weeks before my house went down, I donated all the materials in it and moved to another one, much smaller, in a different neighborhood 4 miles [6 km] from there. The city should not have allowed construction in the coastal area.”

The mayor of São João da Barra, Carla Machado, points to two concurrent phenomena that she says are connected: In addition to the advance of the sea, which has already destroyed many blocks, there are dunes in full formation. They grow and move with the northeast winds and are already affecting houses. Now they are approaching Grussaí Beach, which had not been strongly affected yet by the erosion. “I love Atafona. It was part of my youth. People who live there have very strong bonds with the area. But they don’t want to leave, because of their cultural feelings. We have already built affordable houses, but no housing plan meets their expectations,” Machado says.

She says she sees no consensus on a solution for the problem. The municipal government recently met with members of institutions involved in the issue — including the Public Prosecution Service, Fluminense Federal University (UFF) and the National Institute of Waterway Research (INPH) — to discuss possible projects. But it’s still not clear what will be implemented and when, or who will fund it.

The ideas presented so far include two proposals to build barriers and another one to expand the beach area, but no one can guarantee their effectiveness. “There is no simple solution. Since it would require major intervention, there are disagreements about these projects,” Machado says. “There are several pre-projects that still need technical studies and large investments, in addition to regulatory agencies’ approval. Funds are also scarce, and the city cannot afford to make these investments alone.”

The São João da Barra environment secretary, Marcela Toledo, says the most traditional communities are suffering the strongest impact. “When the sea started advancing, most of the buildings affected were summer homes belonging to wealthy people from Campos dos Goytacazes, as well as several commercial buildings, clubs, among others,” she says.

Toledo says the houses affected today belong to traditional families with links to fishing, including women who work as shellfish gatherers. In March 2019, when the sea made its most recent major advance over the houses, three families were removed: a total of seven people, who are now being assisted under the city’s social rent benefit program. In total, 35 people from 14 families are currently being assisted under the program, Toledo says.

Atafona’s recent history has influenced the way its residents see life, their territory and the world, through the lens of a continuous process of change and adaptation. In the past three years, an art project has helped improve the community’s self-esteem and memory. It aims to help encourage creation of new meanings for the local population’s relations with the ruins. Casa Duna — Atafona Art, Research and Memory Center organizes cultural productions, events and theater plays.

When it opened in 2017, Casa Duna also held exhibitions of the historical collection acquired by the project’s creators from local poet Jair Vieira, who had a small gallery of photographs, books, maps and reports about Atafona in his home.

Julia Naidin is a co-founder of Casa Duna and a holder of a Ph.D. in philosophy. She says the project’s idea is to help the population by using art to shed light on environmental issues and create new local narratives. “We want to fight the ghost town stigma — a label that bothers residents who live well in the city and have strong emotional bonds with it,” she says. “Art informs and sensitizes without creating ready discourses. It helps to provoke reflections, opens up perception, and multiplies the debate. We must remember that there is life, territorial bond, and resistance.”

The author of this story, Rafael Duarte, also shot and produced the video at the top. This story was first reported by Mongabay’s Brazil team and published here on our Brazil site on Aug. 6, 2020.