PALAWAN, Philippines — Deep in the forests of Palawan, the biodiverse island in the western Philippines, a plethora of plant species thrive. Many are so rare and astonishingly beautiful that they fall victim to the illegal plant trade, an age-old problem threatening their survival. Now, they face another threat: the deforestation driven by the province’s tourism industry.

The situation has raised concerns among plant taxonomists who recently described a new Philippine-endemic species of begonia, a perennial herb with light pink flowers and captivating foliage, popular in the ornamental plant trade.

The researchers named the new plant Begonia cabanillasii after Palawan conservationist and field guide William Cabanillas in their paper published in July in the botany journal Phytotaxa.

Palawan is a hotbed of recent begonia discoveries. This year alone, a team of taxonomists and botanists from the Palawan-based nonprofit Philippine Taxonomic Initiative (PTI), the Philippine National Museum of Natural History and the University of the Philippines-Manila, described three begonia species throughout the island.

As a genus, Begonia is mega-diverse, with more than 1,800 known species globally. The new species, and 20 other Palawan-endemic Begonia species, belong to the section Baryandra, known to thrive in the Philippines, which also holds 6-7% of this entire genus.

“In this day and age, when it seems that we’ve discovered everything, B. cabanillasii reminds us of how much our environment can still surprise us,” says Rene Alfred Bustamante, the lead author of the new study and executive director of PTI. “It is the cataloguing of such undiscovered, uniquely Filipino plants that the PTI will continue to explore.”

B. cabanillasii’s only known home is the humid shaded forests in El Nido, a tourist town in northern Palawan renowned for its picturesque karst islands, lagoons and beaches. The authors of the new study found fewer than 50 mature plants during their expedition, and have proposed the species be categorized as critically endangered on the IUCN Red List. “It’s a race against time … I hope there will be sufficient measures in place to safeguard the future of this Begonia,” says author Yu Pin Ang, also of PTI.

What makes B. cabanillasii distinct from other begonia species on the island is its very decorative orbicular leaves, “varying in the coverage of the black patches, with some individuals donned entirely black with only a silver streak down the midvein.” The new species also stands out for its more compact rosette growth and shorter flower stalks with generally larger flowers.

It’s the third begonia species in the Philippines with a five-winged ovary, a characteristic found nowhere else outside the island. Their habitats include shady and rocky undergrowth, where air movement is extremely limited.

This botanical find brings the number of Begonia species known to occur in El Nido to five, highlighting that there could be more in just this one town awaiting discovery. “The last new Begonia species discovered from this town was in 2018 or two years ago,” Bustamante says.

There are 133 Begonia species in the Philippines; 23 are endemic to Palawan. Aside from B. cabanillasii, two more new species have been described from San Vicente, also in northern Palawan; they’ve been proposed for a conservation status of vulnerable and critically endangered, respectively, on the IUCN Red List.

The newly discovered B. beijnenii is a smaller flowering herb with striking dark green markings on an otherwise light green rhomboid or diamond-shaped leaves. The other one has a unique leaf shape: spathulate or broad, round-ended features that were recorded in only one other Begonia species also from Palawan. It bears variegation on its leaves, “varying in the coverage of the white or silver streaks, on dark green to reddish brown other individuals devoid of silver streak.”

“These significant findings showcase that there are still many undescribed unique species of the unexplored forests of Palawan,” says study co-author Danilo Tandang, a botanist at the Philippine National Museum of Natural History. “Discovering new species is important as it helps to conserve and protect them, and explore its usefulness.” 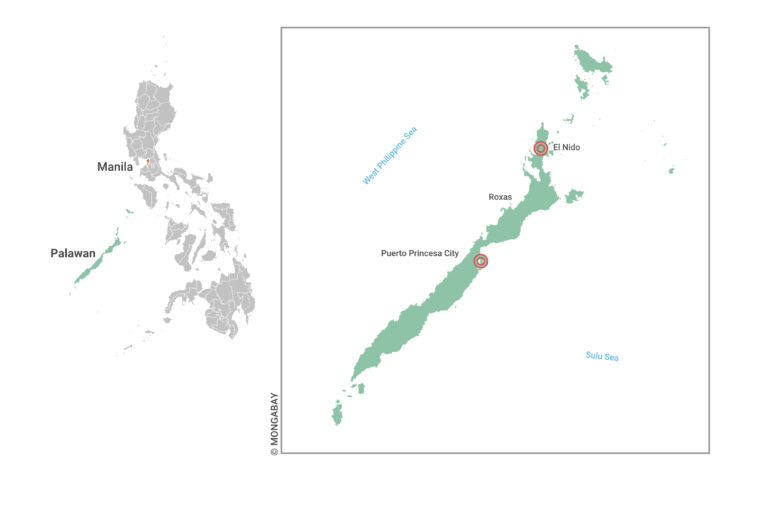 “Palawan Begonia species are mostly micro-endemics, which means they have a very limited distribution, and commonly found in shaded riparian (riverine) forest habitats,” Bustamante says. This makes them prone to disturbance and at risk of extinction, so PTI is in a race to identify more new Begonia species from this largely unexplored province.

In the Philippines, the illicit plant trade targets flowering ornamental plants. Though prohibited under the wildlife resources conservation and protection laws, the trade persists due to weak enforcement capacity. Palawan-based environmental groups have called on authorities to strengthen the implementation of environmental laws to protect the more than 38% of the country’s total wildlife species found only on the island. They point out that Palawan relies on these natural resources to boost its tourism sector.

“Without biodiversity, you cannot promote Palawan as the best island province in the world nor can you promote its tourism value,” says environmental lawyer Grizelda Mayo-Anda of the Environmental Legal Assistance Center.

It’s not just the illegal plant trade that threatens these new plant species — tourism is also playing a role in their extinction. In 2019, Palawan saw nearly 2 million tourists, more than 200,000 of whom visited the booming tourism towns of El Nido and San Vincente, according to government data.

While the province’s international popularity as a top tourism destination continues to grow, adding to government coffers and providing livelihoods for communities, its forests continue to recede. The steady increase of visitor arrivals here through the years has triggered the conversion of forests into tourism areas.

In El Nido and San Vicente, tourism has been linked to illegal logging, slash-and-burn farming, water reservoir excavation, and water extraction and contamination, all of which pose threats to the native flora, much of it possibly still unknown to science.

From 2001 to 2019, Palawan lost 152,000 hectares (375,600 acres) of tree cover, or an area almost the size of London, according to Global Forest Watch satellite data. El Nido and San Vicente had a combined loss of 10,540 hectares (26,000 acres) during the same period, an area was the size of Paris — and a lost opportunity to discover and describe many of the plant species it once hosted.

“In El Nido especially, the high endemism of plants puts them in extreme vulnerability to any habitat lost or disturbances,” the new study says. “The lack of local knowledge on the biodiversity also indirectly led to many species and their importance to the ecology being undermined or ignored, and as a result a victim to developments.”

The El Nido-Taytay Managed Resource Protected Area Office agrees that more must be done to raise public awareness about the conservation of El Nido’s irreplaceable biodiversity, which is increasingly threatened by its tourism industry. “In our campaign, we emphasize that more than being one of the best ecotourism destinations, El Nido is a protected area,” says newly installed protected area superintendent Mildred Suza.

When Begonia populations grow abundantly in the wild, it could mean the forest is still healthy, as they prefer humid and deeply shaded habitats, Bustamante says. Their dwindling numbers indicate how the forest is struggling.

“For plant taxonomists, deforestation means the loss in the variety of life originally supported by a healthy forest. This often leads to a breakdown in a functioning ecosystem and even the extinction of species, with some probably unknown to science,” Bustamante says.

“My hope is that the publication of this species helps to highlight the incredible and still poorly documented biodiversity of Palawan, and demonstrates how we, as stakeholders in this land, should protect our natural habitats so that species such as this one will continue to thrive for future generations to treasure.”

Banner image of a new species of Begonia found in El Nido, Palawan, Philippines: the Begonia cabanillasii. It was first documented in 2017 by Rene Bustamante. Image by Yu Pin Ang.