MANILA — As a rare species of endemic hornbills disappeared from island after island in the Philippines, ornithologists pinned their hopes on Negros: a little-surveyed island in the center of the Philippine archipelago, whose remaining forest areas could potentially hide a population never before seen or recorded by experts.

A 2000 survey by the IUCN estimated that Negros and neighboring Panay Island had a combined tarictic hornbill population of 1,800. But this new study puts the tarictic population of Negros alone at 3,584. 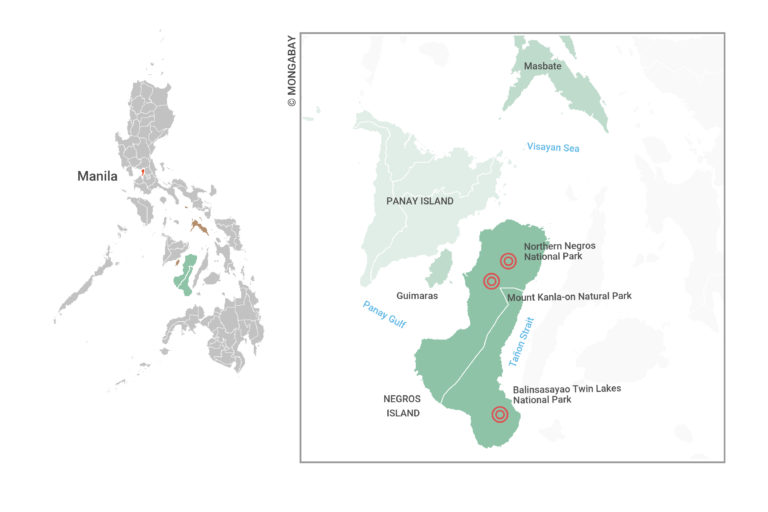 Philippine hornbills are among the most threatened birds in the world. Of the 11 recognized hornbill species in the Philippines, nine are threatened by habitat loss, which heightens competition between mature birds for nesting trees; and hunting for sport and poaching for the illegal wildlife trade.

The Visayan tarictic hornbill is classified as endangered on the IUCN Red List, while the Philippines’ environment department has bumped it up to critically endangered on the national red list. Endemic to a handful of islands scattered around the central Philippines, this hornbill species is now confined to just two islands: Panay and Negros.

Sightings were reported on Masbate Island in 2013 but these have never been backed by surveys. It’s the same for the population on Guimaras, where the species may be “functionally extinct.” A subspecies, the Ticao hornbill (P. p. ticaensis), was the first hornbill in the Philippines to be declared extinct, in 2013, after it disappeared completely from the island of the same name.

It’s this precarious situation that has propelled the Philippine Biodiversity Conservation Foundation (PhilBio) to roll out its Philippine Hornbill Conservation Programme, which includes experts like Paguntalan, who’s also the foundation’s executive director, searching for the country’s fast-disappearing and endangered hornbill populations since 1996.

This recent study is a fruit of that program.

Altogether, these areas have nearly 113,000 hectares (280,000 acres) of forests — 4% of the island’s total land area — and fall under the government’s protected areas program.

The forests on Negros have suffered from massive logging activities from the 1930s to the 1980s. As natural-growth forests gave way to hectares of sugar plantations, various threatened terrestrial species were squeezed into the remaining 129,000 hectares (319,000 acres) of scattered forest blocks on the island. By the 1990s, local government units initiated reforesting programs; the three protected areas included in the study have their share of regenerated logged-over forests.

The research team used existing biomonitoring trails established by the Department of Environment and Natural Resources (DENR) in its protected areas. They added to and adjusted these trails when necessary to avoid double-counting the birds. What made this survey rigorous, though, is that it required numerous teams to conduct synchronized surveys simultaneously over different transect points over a specified period of time.

“Each assigned group walk and record birds (hornbills) simultaneously at 0600hrs within each Protected Area,” Paguntalan describes in an email. “We synchronized the conduct of the count strictly following counting of birds for eight minutes at each point within the line transects and adding distance estimates everytime a bird was encountered (see or heard calling).”

The group then combined these encounters — both visual encounters and records of the hornbills’ notorious raucous calls — to calculate hornbill density using DISTANCE, a widely accepted computer program for species estimates. In NNNP, they estimated a population of 1,580; 532 in Mount Kanlaon; and 1,452 in Balinsasayao.

Listen to the nasal sound of the Visayan tarictic hornbill (Penelopides panini) amid melodious songbirds in the Balinsasayao Twin Lakes. Recoding by Frank Lambert, published in xeno-canto:

The estimate was within a 1,200-meter (3,900-foot) elevation since previous studies determine hornbills as mid-elevation birds. Forest cover in the three protected areas only begins at 800 to 1,000 meters (2,600 to 3,300 feet) and each has different tree distribution, according to the study.

The state of trees in these protected areas influenced the team’s hornbill encounters. “This difference in the forest structure influenced the population density of hornbills in each protected area,” the study says. “It also indicates the main habitat preference of the Visayan tarictic hornbill.”

In NNNP, which covers more than 70,000 hectares (173,000 acres), the group encountered fewer birds because it has the least number of tall, mature trees to host flocks of tarictics. Encounter rates were higher in Balinsasayao and Mount Kanlaon due to their robust tree canopies. But even though the team encountered fewer tarictics in NNNP, it still has the largest estimated population because of its sheer size.

What makes an ideal habitat for hornbills then, says Paguntalan, are a combination of these protected areas: large tracts of forests with mature, tall trees. “The Visayan Tarictic hornbills are canopy dwelling birds and would require a large tract of forest with tall and large trees in order to survive,” she says.

Negros is a new frontier for hornbill research, and this new study boosts the island’s importance in hornbill conservation. Species’ population estimates in the island’s remaining forests are limited; its deep, unexplored terrains are often tagged as insurgency hotspots, making environmental research risky and difficult.

“Most of the forest left [in Negros] are either inside Protected Areas, located on steep slopes, difficult terrain and hardly accessible by vehicles, and may at times [be] reported as insurgency areas,” Paguntalan says. “It would take years and a good amount of resources (manpower and funds) before a good amount of data can be generated.”

To pull off a study of this scale, the group had thorough and massive collaboration with government offices, agencies and communities over a long period of time, even amid financing woes. The upside, Paguntalan says, is that it pushed them to come up with well-planned and smarter strategies to maximize limited resources.

Involving more people in research efforts over a longer period of time also bore fruit. With fewer than 20 ornithologists in the country who are actively working in the field and in museums, it’s important to engage local communities, whose members become their eyes and ears during surveys and are instrumental in protecting the species.

“We were also surprised by the overwhelming support from the local government units and the warm welcome and enthusiasm of the local communities participating in the event made it even more inspiring,” Paguntalan says. “And to top it all, local governments included the synchronized hornbill count in the next year’s budget for monitoring.”

Aside from updating the population database, this study provides a specific estimate of hornbill populations, which helps in the conservation and management of protected areas in Negros. For one, the high population density in Balinsasayao shows that government programs implemented since 2004 are working, Paguntalan says.

“Hardly can one encounter a hornbill in a day or two from 2004 to 2008,” she says. “But now, a visit for a day would ensure an encounter with a hornbill and if one is very lucky, see a flock of close to 50 hornbills.”

It also adds to the existing literature on hornbill ecology, which has only been limited to those in Panay and some captive species in Negros. For Negros hornbills, their feeding habits are their weak point, Paguntalan says. They feed on ripe fruits with other birds, making them easier to spot for hunters who “can easily eradicate a local population” in a single expedition.

“We barely scratched the surface in understanding their intricate relationship with our endemic and native trees and their impacts in maintaining the integrity of our forest ecosystems,” Paguntalan says. But at least now, it’s possible to effectively and efficiently monitor local avian populations. “It is replicable not only for Protected Areas in the country but also in any remaining forest habitats,” Paguntalan says. “It can even be applied to other species of birds.”