ANTANANARIVO, Madagascar — This spring, Madagascar lost a prominent champion of the country’s system of protected areas. Guy Suzon Ramangason, a former director-general of Madagascar National Parks (MNP), the quasi-governmental agency that manages many of the country’s parks, helped develop and promote numerous protected areas across the country during his long career in conservation. The island nation faces many challenges attempting to conserve its mega-diverse species and ecosystems while lifting its people out of poverty.

Ramangason died in Mauritius on April 30, according to the Agence Malagasy de Presse. He had gone there for treatment after suffering post-operative complications from surgery in Madagascar related to a hemorrhagic stroke he suffered in mid-March.

On May 9, Ramangason was posthumously elevated to the rank of Grand Officer of the National Order by Baomiavotse Vahinala Raharinirina, Madagscar’s environment minister, at a ceremony in Ambositra district, in the east-central part of the country, according to a post on MNP’s Facebook page. 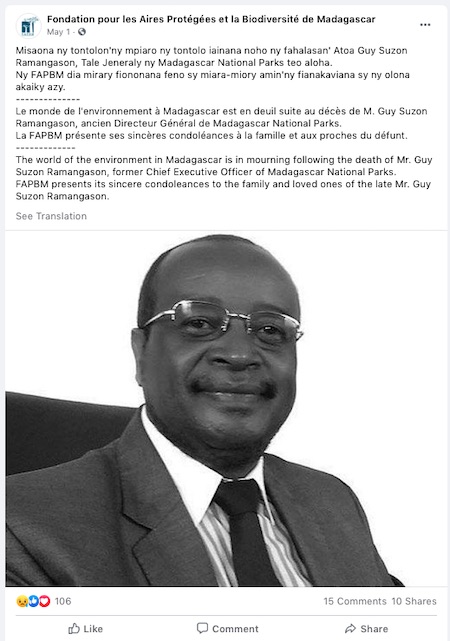 “He has always fought for the environment, but especially the forest, to be recognized at its fair value,” Raharinirina said at the ceremony, according to the post. “He has repeatedly stressed that if the forests of Madagascar were to disappear … There will be a water shortage.” The funeral took place the next day in the same area.

“It is sad because we have lost a loved one,” Mamy Rakotoarijaona, MNP’s current director-general, said, according to L’Express de Madagascar. “Not only have we lost him, but he is still young in the field of research and in the transmission of these skills to young people.”

Ramangason earned a doctorate in forest ecology from Le Centre National de la Recherche Scientifique in Montpellier, France, and the University of Madagascar. In the 1980s he taught and researched forest ecology and plant biology at the University of Madagascar in Antananarivo, then worked at various national and international organizations, including the U.N. Development Programme, the World Bank, the Tany Meva Foundation, and WWF. He held the post of general manager of the National Association for the Management of Protected Areas, which eventually became MNP, for 16 years before retiring in 2019.

According to a UNESCO memorial, Ramangason was “the backbone” of the country’s “Durban Vision,” a 2003 commitment to triple the area under protection from 1.7 million to 6 million hectares (4.2 million to 14.8 million acres). He was the coordinator of the Mananara Nord Biosphere Reserve in northeastern Madagascar, the country’s first biosphere reserve inscribed by UNESCO in 1990. He helped get Tsingy de Bemaraha National Park in west-central Madagscar, which protects a network of otherworldly limestone formations, inscribed as the country’s first UNESCO World Heritage site the same year.

“He was recognized for his charisma, dynamism, his unfailing commitment and dedication to the preservation of our protected areas, the jewels of biodiversity,” reads a memorial on MNP’s website.