In Sri Lanka, a South American flower usurps a tree sacred to Buddhists and Hindus

COLOMBO — With its blends of soft red, pink and yellow, the fragrant cannonball flower (Couroupita guianensis) is a favorite of Sri Lanka’s Buddhists when making floral offerings during religious activities. They call it sal, with religious tales linking the tree to the birth and death of Gautama Buddha, the founder of the faith. Hindus in the region call it nagalingam, a flower offered to Lord Shiva, the most powerful of gods in the Hindu pantheon.

The problem, however, is that the cannonball tree isn’t the sacred plant that countless devotees believe it to be. In fact, it didn’t arrive in Asia until the late 1800s, brought over from its native Central and South America by the British. That means there’s no way it could be part of the canon of Hinduism or Buddhism, which were established more than 2,000 years earlier.

The Handbook to the Flora of Ceylon by the British botanist Henry Triman (compiled between 1893 and 1900) doesn’t mention the cannonball flower; nor does Flora of British India by the botanist J.D. Hooker in 1875.

“These books contain details on both introduced and naturalized plants but the cannonball tree is conspicuous by its very absence in these historical scientific compilations on the island’s fauna, indicating that the tree was not naturalized or found locally at the time,” said Siril Wijesundara, former director-general of the Department of the Botanical Gardens of Sri Lanka.

“The cannonball tree was introduced to Sri Lanka with the planting of the first sapling at the Royal Botanical Gardens of Peradeniya, way back in 1881,” Wijesundara told Mongabay. He added the plant adapted well to Sri Lankan soil, reaching fruit-bearing stage after about 15 years.

A century ago, when the plant was still relatively new here, there was no confusion about the identity of the cannonball tree, Wijesundara said: it was recognized as an introduced plant. 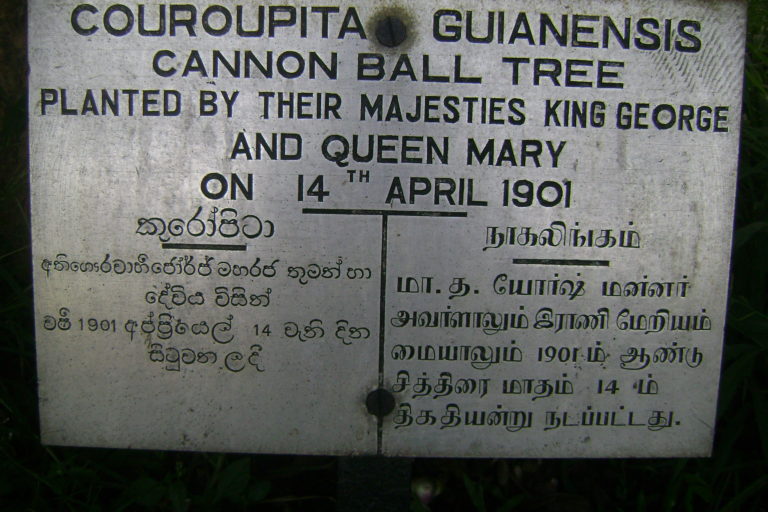 There’s no mention of the local name sal on this 1901 plaque that records the planting of a cannonball tree (Couroupita guianensis) sapling by England’s King George V to mark his visit to Sri Lanka, indicating that the confusion over the tree is much more recent. Image courtesy of the Royal Botanical Gardens, Peradeniya.

To commemorate the visit by England’s King George V to Sri Lanka (then known as Ceylon), a cannonball tree was planted at the Royal Botanical Gardens in 1901. The commemorative plaque in the local language, Sinhala, identifies the tree only by its genus, Couroupita. “If the confusion over the name sal was prevalent then, botanists who documented Sri Lankan flora would have definitely used the local name for the script, introducing the tree in the local language,” Wijesundara said.

Shelomi Krishnarajah, the current head of the Royal Botanical Gardens, told Mongabay that the original sal tree mentioned in Buddhist lore is the tree known as Shorea robusta. It’s common throughout the Indian subcontinent, including in Nepal, where the Buddha was born. “Even the legend matches. Peradeniya Botanical Gardens have several blooming Shorea robusta trees,” Krishnarajah told Mongabay.

It’s not hard to see how the fragrant cannonball tree got incorporated into the origin stories of two of world’s most ancient religions, thanks to its flower.

The cannonball flower has six petals with a base at the center, with a small bulge in the middle and a hood. At the base around the bulge, there are stamens with pollen, and on the hood that covers the bulge there are longer stamens without pollen.

One Buddhist interpretation is that the bulge represents a stupa, a shrine of sorts in which relics are preserved, while the stamens at the base represent devotees worshiping the relics. The long stamens on the hood are considered gods who have descended from the heavens to pay homage to the stupa.

For Hindus, the name of the flower, nagalingam, combines the Sanskrit naga, meaning cobra, and lingam, the symbol of Lord Shiva. According to Hindu mythology, the bulge at the base is considered the lingam, while the hood represents a cobra offering protection to the lingam.

As C. guianensis has thrived since its introduction to Sri Lanka, it’s been increasingly mistaken for the sacred sal tree over the actual sal, S. robusta. One of the most notable mistakes is the inclusion of the cannonball flower in a textbook prescribed for state-run schools, effectively mainstreaming the wrong information to the public from the outset.

According to Nimal Gunatilleke, emeritus professor of forest ecology at the University of Peradeniya, the mistaken identity of the real sal tree has led to serious problems at times.

During a conference on Ayurvedic science, a research team testing an Ayurvedic recipe reported that the combination of medicinal compounds didn’t work. Gunatilleke looked into the compounds used by the researchers and found that the team had used the bark from the wrong sal tree. “Obviously, that combination wasn’t going to work as the properties were different,” he told Mongabay.

The imposter species gained higher levels of recognition and became a “symbol of peace” in 2002, ahead of peace talks facilitated by Norway between the Sri Lankan government and the Tamil Tiger rebel group. The facilitators wanted both delegations to plant a flowering tree that was significant to both Buddhists and Hindus, and mistakenly picked a cannonball tree sapling to symbolize the new journey toward making peace.

Those peace talks collapsed, but the cannonball tree’s identity as the sal tree remains strong.

Banner image of the religiously significant cannonball flower. With its blends of soft red, pink and yellow, the fragrant cannonball flower (Couroupita guianensis) is among the favorite flowers of both Buddhists and Hindus and frequently offered in veneration. Image courtesy of Asanka Dewage.