President Jair Bolsonaro has made clear on multiple occasions that Brazil’s indigenous territories should be opened for mining and other resource exploitation, justifying such a move as a boost for the economy.

This kind of activity is currently prohibited under Brazil’s Federal Constitution of 1988 and goes against the will of many indigenous peoples. Indigenous territories are protected by law and considered to play a major role in preserving the Amazon rainforest.

In February, Bolsonaro took a step forward in his plan, proposing a bill known as PL 191/2020 that would allow commercial mining in indigenous territories. The bill has been challenged by indigenous groups and environmental organizations, and is unpopular with the public.

Still, Bolsonaro calls mining inside indigenous reservations “a dream” of his and says that “indigenous people are just as Brazilian as we all are” and therefore have the same “needs” as the rest of the people.

But who are the real potential beneficiaries of mining on indigenous lands?

A recent analysis of data from the National Indian Foundation (FUNAI) and the National Mining Agency (ANM) by Agência Pública has revealed not only the names of individuals and companies requesting authorization to mine on indigenous territories, but also that there’s been an increase in such applications in these areas in 2019, reversing the trend of previous years.

Private individuals and companies are required to request authorization through the ANM before being allowed to engage in exploration of minerals or any other subsoil resources in Brazil. The process begins with a request for authorization to survey for the substance, and from there can go through several stages until a permit is finally issued for exploration or mining. The process also defines the area of land on which mining activities may take place.

The analysis by Agência Pública took into account all of the proposals involving indigenous areas, both those that have been officially demarcated and those not yet demarcated. In some cases, indigenous lands have been demarcated to include areas of existing mining proposals, but these proposals have not been revoked. Agência Pública looked at both applications to mine on indigenous lands submitted between 2011 and 2020, and those applications filed during the first year of the Bolsonaro government (2019-2020).

Requests for authorization to mine on indigenous lands in the Amazon

The data show that the number of these mining applications for indigenous lands in the Amazon increased by 91% since Bolsonaro took office. This has been the first time since 2013 that such requests have increased.

Among the potential beneficiaries of the president’s legislation are prominent political figures from the Amazon, small prospecting cooperatives that include partners accused of environmental crimes, a global mining giant, and even an artist from São Paulo. 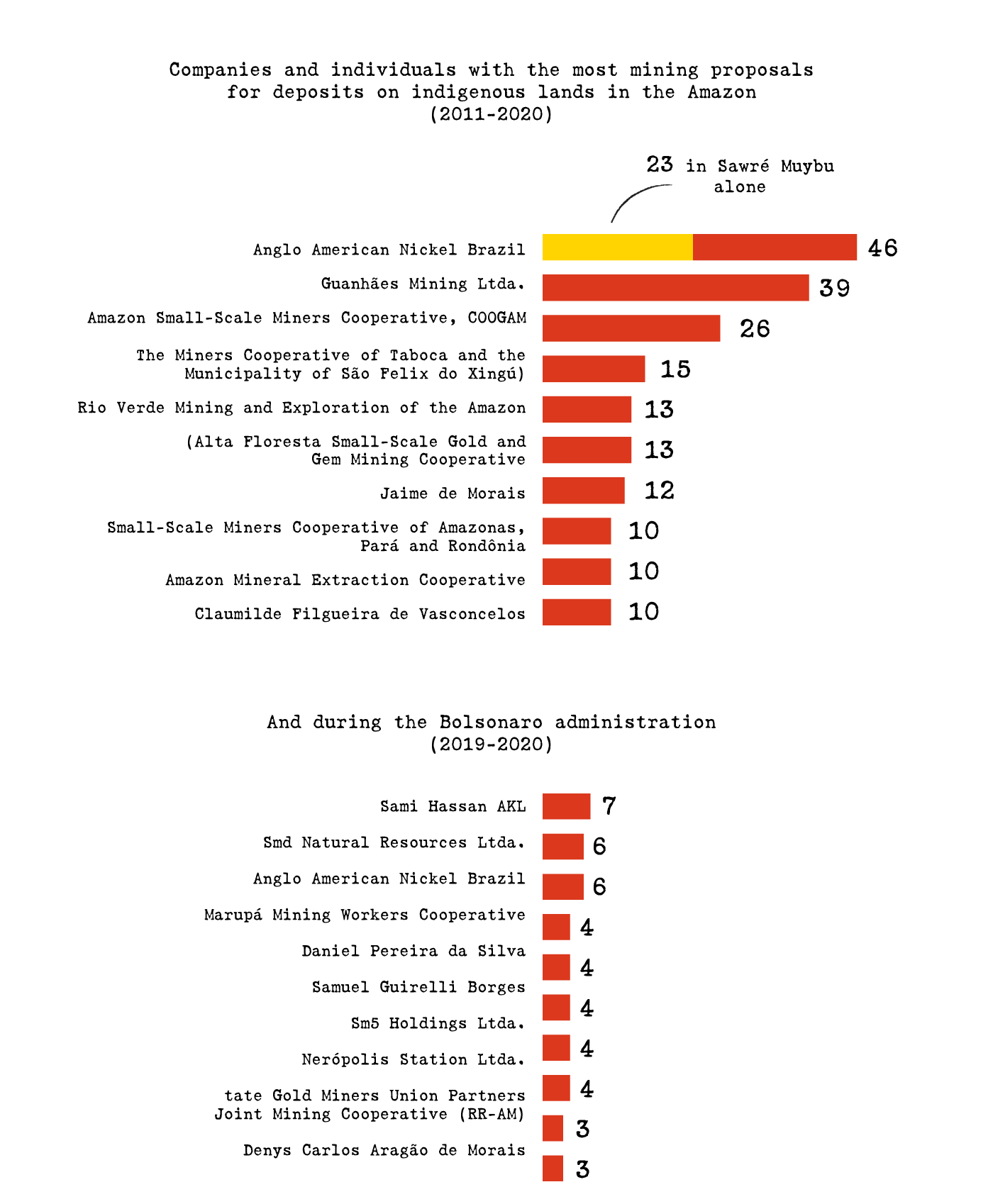 An artist leads in the number of applications submitted in 2019

The leading applicant for mineral exploration on indigenous lands during the first year of the Bolsonaro administration is architect and artist Sami Hassan Akl. He submitted seven requests for diamond exploration on indigenous lands in 2019 alone. Akl is a partner of the company Bogari & Akl Comércio Importação e Exportação Ltda., headquartered in São Paulo and involved in the art market.

Another to stand out in the survey is the multinational mining giant Anglo American, headquartered in London and Johannesburg. One of its subsidiaries, Anglo American Níquel do Brasil, the largest nickel producer in the country, submitted six requests for mineral exploration on indigenous lands in 2019, and 46 since 2011.

Anglo American currently faces lawsuits related to environmental violations in Brazil. The company’s iron ore unit is the target of legal action taken by the Public Prosecutor’s Office in the state of Minas Gerais related to the rupture of a slurry pipeline in the town of Santo Antônio do Gama. The state prosecutor is seeking a 400 million reais ($69 million) fine for the damages incurred by the communities impacted by the rupture of the Minas-Rio Slurry Pipeline. At the national level, the Federal Prosecutor’s Office has requested the suspension of permits that have already been issued to Anglo American.

In response to a request for comment, the company said it had “presented its defense during the legal proceedings and didn’t comment on the content of such proceedings.” Regarding the mining applications it submitted, a company representative said these were “based on the available geologic information,” that “authorization for such mining exploration activities are the discretion of the relevant authorities,” and that the company “only carries out mineral exploration in duly authorized areas.”

The company also said it has “conducted a review of its portfolio and rescinded all requests for areas that include indigenous lands that have been submitted up to 2015. Current applications for mineral exploration in areas that border indigenous lands may include segments of these territories. In such cases, it falls upon the National Mining Agency to ensure that limits of areas authorized for mining fall outside of indigenous lands or reservations.”

Who are the people most affected by mining

The majority of the applications to mine on indigenous lands submitted during the first year of the Bolsonaro administration have been for territories in the state of Pará. The Kayapó Indigenous Territory has been targeted with the most requests, followed by the Sawré Muybu Indigenous Territory of the Munduruku people, also in Pará.

Sawré is the indigenous territory most affected by mining over the past decade: more than 14% of all mining licensing applications that touch on indigenous areas in the Amazon affect this territory. This amounts to 97 applications, mostly for deposits of gold, copper, diamonds, and, to a lesser extent, tin and gravel.

Following Pará, Mato Grosso and Roraima are the next states for which requests to mine on indigenous land have been submitted during the first year of the Bolsonaro administration.

Increase in mineral survey and mining proposals in the Amazon 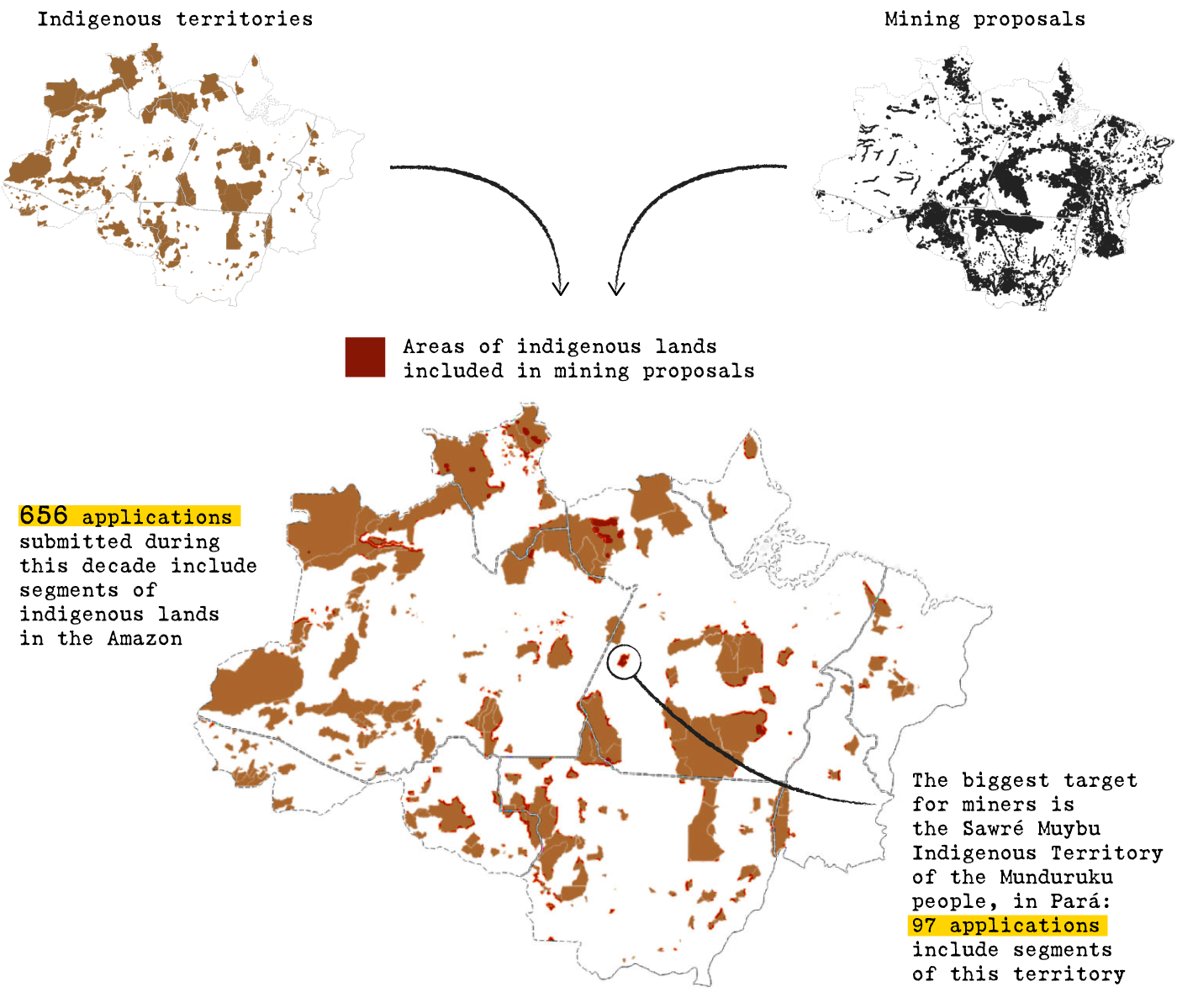 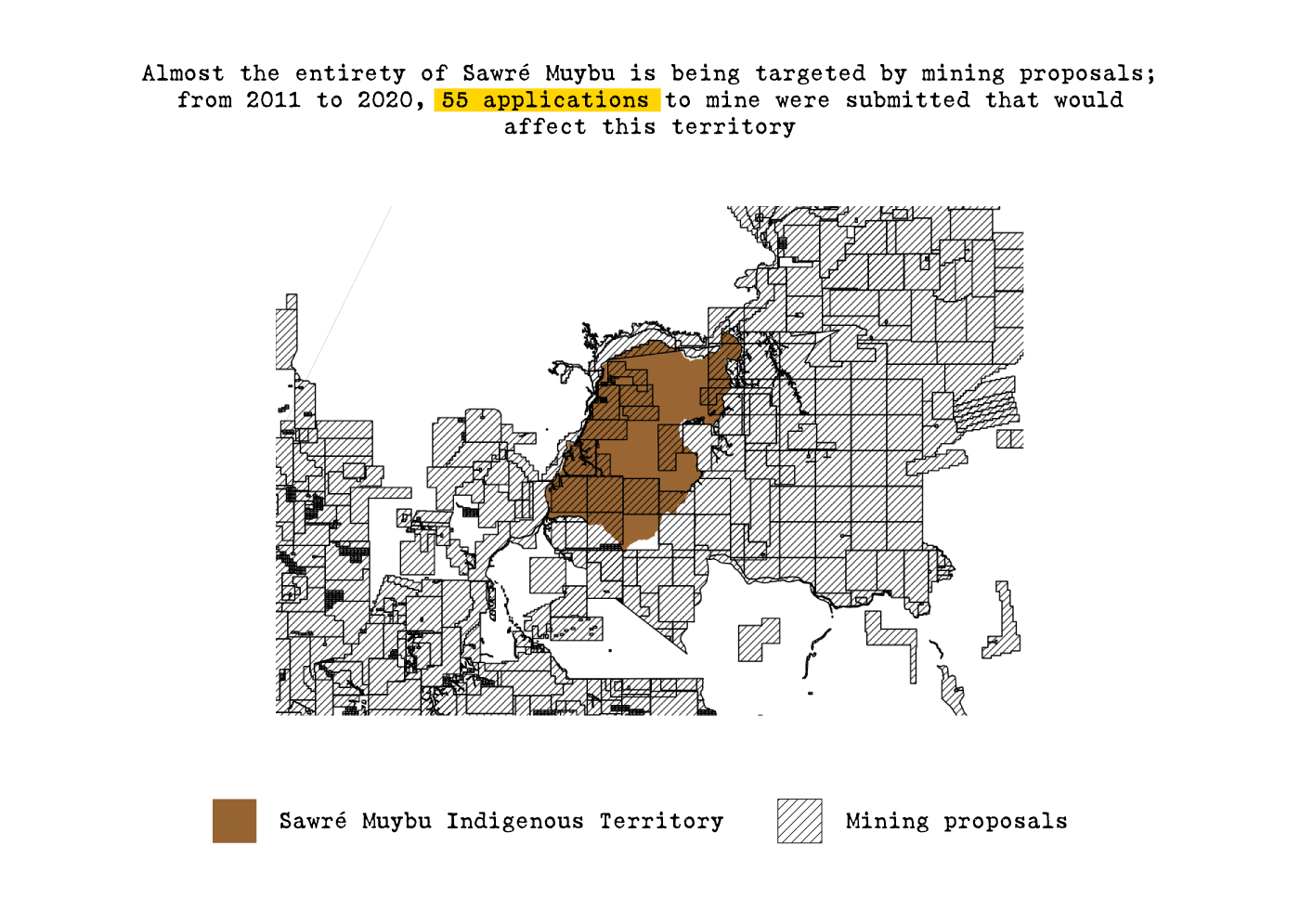 The ANM has registered mining applications, and granted mining permits, even for demarcated indigenous lands — that is, territories that have already gone through all of the stages of land regularization with the federal government, including presidential sanction. One of the territories potentially affected by issued mining permits is that of the Uru-Eu-Wau-Wau people in the state of Rondônia, whose territory was officially demarcated in 2006. Nine different indigenous peoples live on this territory, including several isolated groups.

Yet in 2013, for example, the Ariquemes Small-Scale Miners Cooperative (Cooperativa Mineradora dos Garimpeiros de Ariquemes or COOMINGA) obtained a small-scale gold mining permit for an area that includes part of the Uru-Eu-Wau-Wau Indigenous Territory. The cooperative is now the third-largest producer of tin in the country, according to the ANM’s 2018 Annual Mining Report. In 2016, the Rondônia Tin Cooperative (Cooperativa Estanífera de Rondônia) acquired a mining permit to mine cassiterite, the main tin ore, in an area that included segments of the Uru-Eu-Wau-Wau territory. The largest open-air cassiterite mine in the world is located in Ariquemes, Rondônia.

In the past ten years, the ANM has registered 656 mining proposals that include segments of indigenous territories. In addition to land belonging to the Munduruku, in Pará, the mining applications submitted during this decade have mostly included the territories of the Kaxuyana and Kayapó peoples, both in Pará, and the Yanomami people in Roraima and Amazonas. 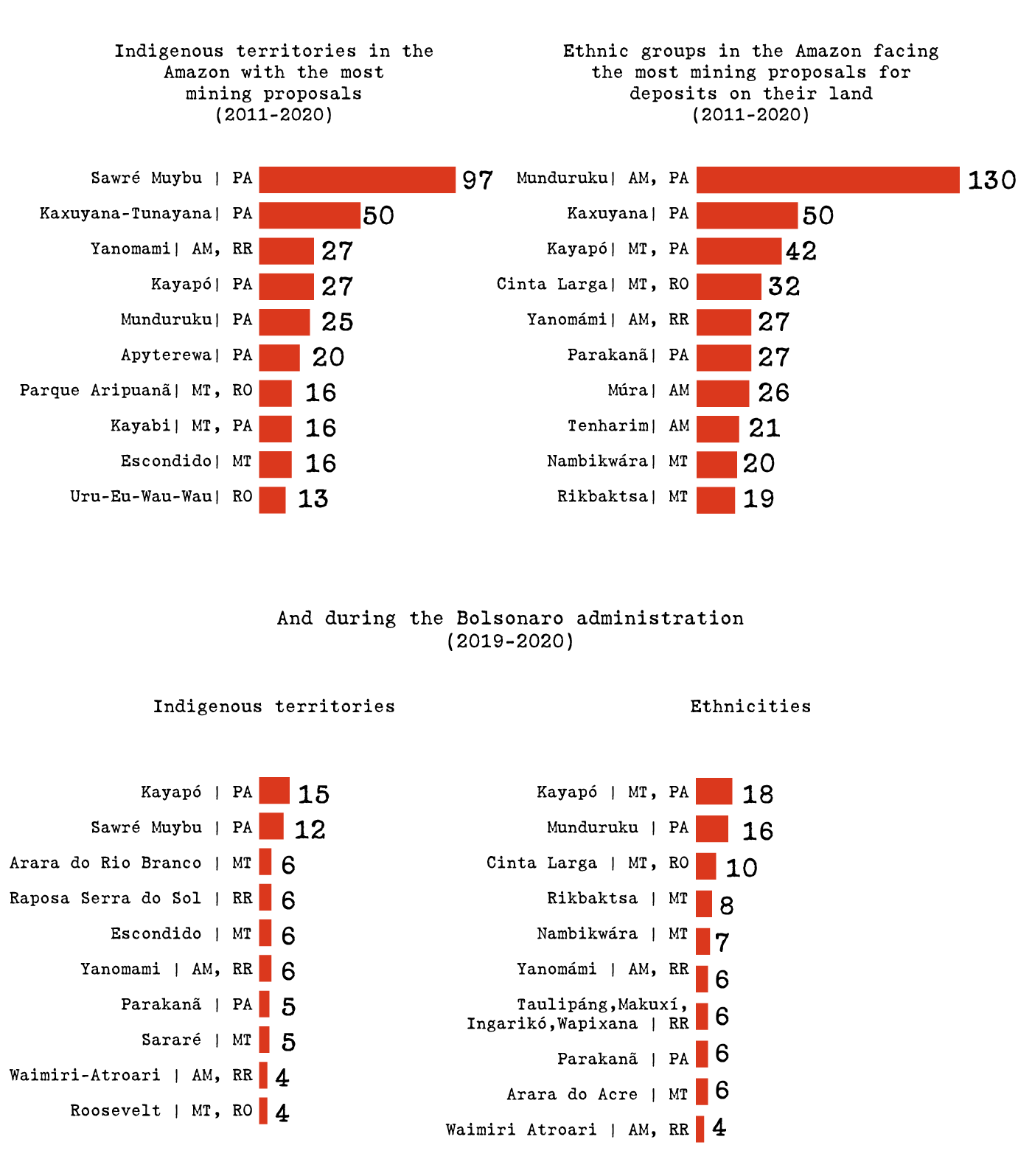 Two politicians from the state of Amazonas are among the partners of the company with the third most applications to mine on indigenous territories submitted during the first year of the Bolsonaro administration.

SMD Recursos Naturais Ltda., based in São Paulo, includes among its partners the former governor of the state of Amazonas, Amazonino Armando Mendes, and his former finance secretary, Samuel Assayang Hanan. Hanan has a long history of connections to mining: among other professional positions, he was president of Paranapanema S.A., a copper mining giant; worked in the copper extraction sector of oil major BP; was industrial and commercial director of the Brazilian Tin Company (Companhia Estanífera do Brasil or CESBRA); and was a member of the Department of Mines and Energy’s High Council on Mines.

The applications submitted by SMD are for tin surveys in areas that include part of the Yanomami territory in Roraima, and the Waimiri-Atroari territory that straddles Roraima and Amazonas.

As governor, Mendes supported moves to mine on indigenous lands. In 2017, he renewed the environmental operations permits for the Amazon Small-Scale Mining Cooperative (COOGAM) — another company that has filed applications under the Bolsonaro administration — and issued a gold exploration permit to the same organization.

The permits were issued before the conclusion of a study conducted by the Amazonas State Council on the Environment (CEMAAM) regarding mercury runoff in the Madeira River. They were suspended in full by a federal court days after being issued. In suspending the permits, Judge Maria Elisa Andrade pointed to a series of breaches of the environmental requirements for issuing such permits, which “could put the integrity of the Madeira River, as well as human health, biodiversity, and the Amazonian ecosystem at risk.”

COOGAM comes third overall for the number of applications to mine on indigenous lands since 2011. The cooperative is composed of more than a hundred small-scale miners, and operates in the states of Rondônia, Amazonas and Pará. This cooperative has submitted 26 applications to mine on nine indigenous territories in the Legal Amazon, the administrative region that spans nine states and extends slightly beyond the Amazon rainforest).

Several people connected to the organization face charges in federal court of engaging in illegal mining on indigenous lands. This includes the current president of the cooperative, who has been brought up on charges by the Federal Prosecutor’s Office of forming a criminal organization, theft of public resources, illegal environmental contamination, and the extraction of mineral resources without legal authorization. The founder of COOGAM faces similar charges in federal court.

The Marupá Mining Workers Cooperative (COOPERMINGAMA), which submitted four applications to mine on indigenous territories in 2019, is another entity with partners implicated in alleged environmental crimes. One of the cooperative’s 12 partners was investigated for involvement in fraud related to the acquisition of forest carbon credits. Another partner is the defendant in two federal court cases for engaging in unauthorized small-scale mining along the Jamanxim River in Pará, and for illegal gold extraction from the Juami-Japurá Ecological Station in Amazonas.

“It is a curious bureaucratic phenomenon: the requests are not rejected, but also not authorized. They remain what we call ‘Snow White processes,’ laying in wait for Prince Charming’s kiss,” he said. “The National Mining Agency sometimes upholds permits in this situation, in cases of permits granted before the demarcation of indigenous territories or before the Constitution of 1988. These permits are being challenged in court.”

In its response to challenges from the Federal Prosecutor’s Office in Pará, the ANM said it does not consider the absence of relevant legal regulations to exclude the possibility of leaving such mining applications pending. But in August last year, a federal court in Amazonas ruled that the ANM must revoke all pending applications for mineral exploration or mining on indigenous territories in the state.

“We don’t know if the agency will also revoke applications for other states, but these pending applications are irregular,” Santilli said. “The Federal Supreme Court has already ruled that the rights of indigenous people should prevail whether the land they have permanently occupied has been officially demarcated or not. That is to say that any permit for extraction or development activities on indigenous lands, including mining, should be cancelled or revoked. The National Mining Agency plays dead, in part to avoid being challenged in court by the beneficiaries of such permits.”

Neither the ANM nor FUNAI responded to Agência Pública’s request for comment by the time this report was published.

This report is part of Agência Pública’s ongoing series “Amazônia Sem Lei” (“Lawless Amazon”), an investigation into violence related to land regularization, demarcation and agrarian reform in the Legal Amazon. The special series also covers conflicts in the Cerrado, a tropical savanna ecoregion that is Brazil’s second-largest biome.