by Sibélia Zanon on 28 April 2020 | Translated by Maya Johnson

Recognizing the wisdom accumulated by nature over billions of years and reconnecting to it is the foundation stone of biomimicry, a branch of science gaining interest for reproducing strategies from nature to provide solutions for our times. Using nature as a guide is nothing new: if it weren’t for birds, airplanes most likely wouldn’t exist. Yet biomimicry brings two new aspects: the conscious use of nature as source of inspiration, and the systemization of research through a non-linear methodology.

U.S. biologist Janine Benyus, co-founder of the Biomimicry Institute in the Montana, wrote the book Biomimicry: Innovation Inspired by Nature in 1997 and has been responsible for propagating the science now being used in multiple applications.

Biomimicry helps in fields like health care, by tracing possible relationships between wasp poison and new cancer therapies, for example. It reproduces spiderweb technology for the beauty industry; offers improved energy efficiency to the field of engineering by observing how termite mounds or toucan beaks work; proposes the use of mushroom roots and agricultural waste to replace Styrofoam and plastic; and can be applied very well to new technologies like logistics apps. It also offers foundations for work in personal development and human behavior.

Biomimicry is increasingly becoming an important tool. Global warming, production standards that are aggressive toward the environment, elevated levels of degradation, waste and disposal, population growth: together, they all place the availability of natural resources in check and call our attention to the need for new industrial and economic parameters.

“The transcending principle behind biomimicking is that life creates conditions that are propitious to life,” says Alessandra Araújo, who did her postgraduate biology studies in biomimicry at the University of Arizona and founded the Bio-Inspirations consultancy. “Nature doesn’t create anything that generates problems ad aeternum. When an organism’s life cycle ends, it is transformed into raw materials. Even a venomous animal like coral snake or a lethal scorpion are transformed into raw material, unlike a battery or a lithium cell.”

By giving value to multifunctional design and the use of materials that nature recognizes and that can be integrated in productive cycles, biomimicry optimizes resources and is aligned with the principles of a circular economy. Unlike a linear economic model based on extraction, transformation and disposal, the circular model dissociates economic growth from the consumption of finite resources and implements renewable energy. In doing so, it transforms what would be residue into resources to promote continuity of the cycle and bring benefits to the whole system, be it economic, natural or social.

Biomimicry is widely used for energy efficiency. Just as the movement of whale fins inspired innovation in wind energy generation, the circulation of air inside termite mounds inspired the design of more sustainable buildings like the Eastgate Centre in Harare, Zimbabwe, which used precise computational simulations of thermal performance, and Council House 2 at Melbourne City Hall, Australia.

Plans for the Votu hotel in Brazil’s Bahia state are still on the drawing board, awaiting a decision by foreign investors. The project was inspired by many species’ strategies for keeping their homes cool. Prairie dog holes, for example, guided the architects in designing the bungalows, which are meant to remain well-ventilated at all times. The self-shading capacity of some cacti led to the creation of concrete walls that, aside from cooling, sustain green roofs. In the kitchen, this roof also helps keep things cool: inspired by toucan beaks, which are very efficient heat exchange systems, a copper coil attracts the hot air and runs through the of the ceiling, cooling the air that comes back into the kitchen.

A classic case of biomimicry is how the Japanese Shinkansen bullet trains were remodeled in 1989. When it entered a tunnel, the previous generation of the train would push the air in front of it at such a speed that it produced a pressure wave and sound boom that could be heard 400 meters (1,300 feet) away — a problem, especially, in residential areas. Technological development manager Eiji Nakatsu was a bird-watcher and became inspired by the aerodynamics of the kingfisher’s beak. When it enters the water at high speeds, the bird creates no impact wave — an important tactic to not scare its prey. The engineer redesigned the front end of the train accordingly, significantly reducing the sound.

Another inspiration coming from the water has been beneficial to the field of medicine. The structure of a shark’s skin can prevent bacterial growth and keep microorganisms from attaching themselves. In 2014, Colorado-based Sharklet Technologies, together with a group of scientists, published an article revealing the significant reduction of surface contamination when sharklet surface coverings were used, replicating the geometry of shark’s skin. If applied in labs and operating rooms in the future, the film would eliminate the need for chemical or toxic products in cleaning, which can be harmful to health and could reduce infections.

The deaths of birds colliding with glass-walled buildings led the German company Arnold Glass to seek out a solution in spiderwebs, which have a fiber that reflects ultraviolet light, making the webs visible to birds so they don’t run into them. Based on this observation, the company developed a line of glass called Ornilux, which reflects UV light, making it visible to birds while remaining nearly transparent to the human eye, which can’t see this type of light. The glass is already in use in buildings and houses in many countries, especially Germany and the United States.

A collection of biomimicry inspirations can be seen on the asknature.org website, part of the Biomimicry Institute. It brings together information and promotes growth of biomimicry. Among the inspirations shared is Nucleário, a product created by the Brazilian startup of the same name to make forest restoration processes more efficient. The project was the first Brazilian initiative to win the Ray of Hope Prize, the Biomimicry Institute’s annual award.

“Winning the 2018 prize was very important. The exposure we got first in the American media and later inside Brazil generated a lot of attention,” said Pedro Rutman, graphic designer and creator of Nucleário together with his brother Bruno Rutman. “Aside from the publicity, we received $100,000, all of which we invested in the company. We are currently making final adjustments to the product and will be producing in large scale by mid-2020.”

The main idea for the product was based on three elements in nature: bromeliads, for their capacity to hold water and collect biodiversity; plant litter, because it protects soil from leaching; and winged seeds, because they are nature’s strategy for dispersion via wind. The product’s light, reusable structure has a barrier that keeps cutter ants away, impedes the growth of invasive grasses and stores water for dry periods. Nucleário’s main objective is to help with post-planting maintenance, diminishing any obstacles to reforestation.

Watch the video about Nucleário here:


A Brazilian pioneer in the use of biomimicry, Natura became the world’s fourth-largest beauty company when it bought Avon in January of this year. Last year, it launched a line of hair products called Lumina, also inspired by spiderwebs. After discovering that the protein in webs is similar to that in strands of human hair, Natura reproduced the technology in labs so the product regenerates hair fiber.

One of Natura’s suppliers is Tátil Design de Ideias, founded by designer and biomimicry specialist Fred Gelli. Tátil helped Natura develop a bottle shaped like a droplet for another shampoo line, SOU. The bottle’s drop-like geometry avoids waste and uses 70% less plastic than conventional bottles. Natura also counts on consulting from Janine Benyus’ Biomimicry 3.8 for the use of biomimicry in other areas such as the sustainable production of palm oil.

Other biomimicry applications are in the advanced stages of research, like suture staples inspired by the jaw of the Atta laevigata leafcutter ant, one of the processes patented by Brazil’s National Institute of Amazonian Research (INPA) in 2010. Records show that ant jaws were frequently used for stitching wounds a thousand years ago. Industrial designer Thays Obando Brito, together with a group of researchers from the Federal University of Rio de Janeiro (UFRJ), published a study on the topic in 2017 with the goal of identifying possible biomaterials that could be used in producing the staples. 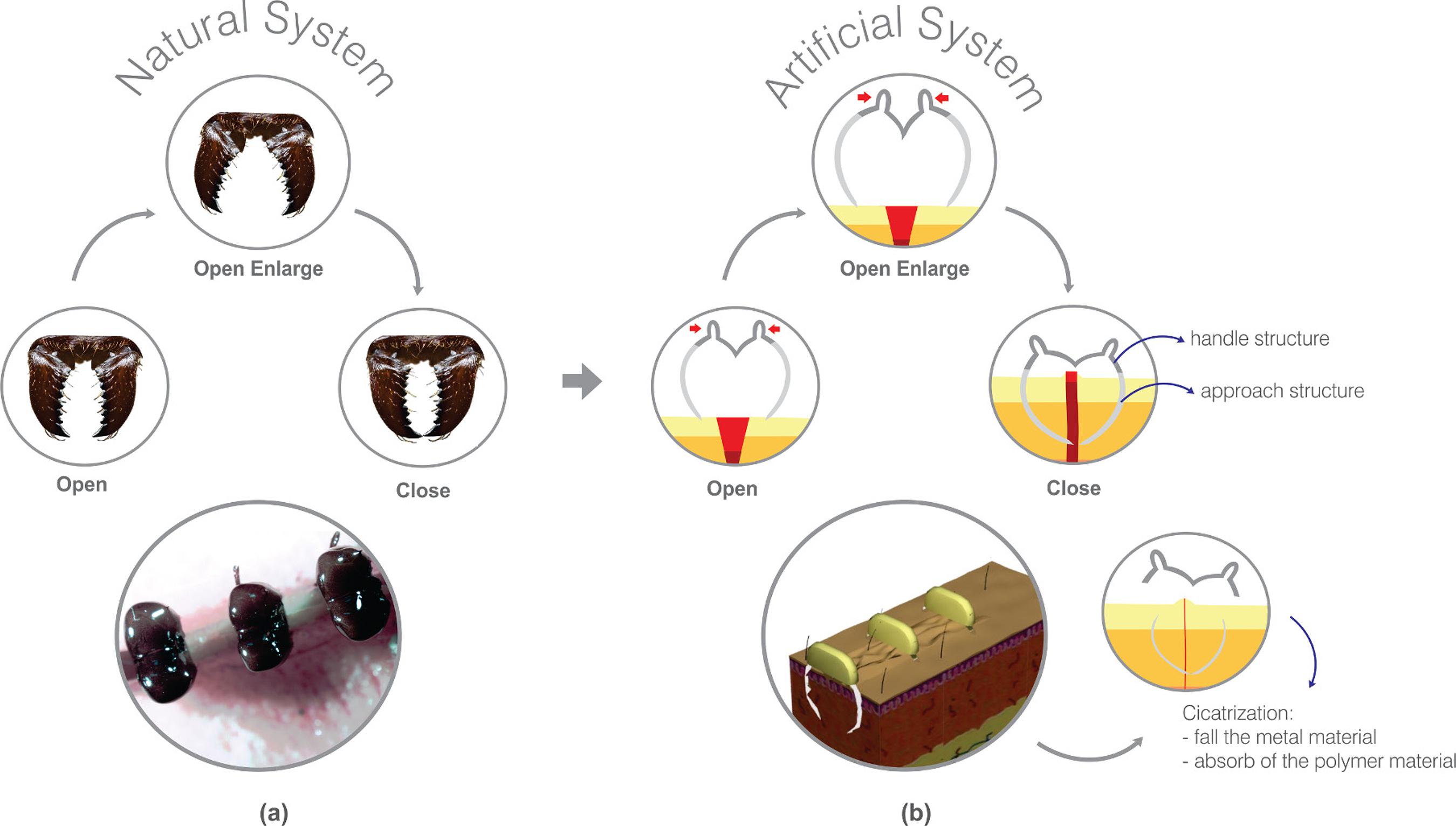 The wisdom of living organisms

Brazilian specialists are noticing growing interest in solutions that come from nature. Consulting companies are promoting immersion courses in natural environments including the Amazon and Cerrado biomes. They use biomimicry not only as an instrument for innovating materials, but also for the diagnosis and improvement of communication processes, interpersonal relationships, inclusion, and human development. Even though R&D in Brazil is going through a period of restricted funding, college programs, especially those related to design, have included the science in their curricula for more than a decade.

This year the Amazonia Science Museum (MuCA) is slated to be inaugurated in Belterra, Pará state. The museum is intended to be a center for spreading scientific values in the region and promoting thinking about the value of standing forests. “The Museum will emphasize the importance of biomimicry together with sciences like botany and zoology,” says Alessandra Araújo of Bio-Inspirations. The initiative belongs to the Pará state government, as part of its Secretariat of Science, Technology and Professional and Technological Education (SECTET), together with partners.

The private sector has also offered incentives for project development based on biomimicry. One example is the Mycena decorative line, soon to be on the market and already part of civil engineering firm Atex Brasil’s catalog. The line of ceiling, wall and cubicle coverings is made from recycled plastics and was inspired by the configuration of mushroom colonies. The product was developed by students and the Instituto Mauá, winners of the fifth edition of the Odebrecht Braskem Design Challenge in 2017. Atex, which specializes in production of rigged slabs, was a partner in that challenge and will release the product this year.

An article in Forbes magazine in 2014 ranked biomimicry first among the main technological trends that can help a company stand out on the market. Data released by economist Lynn Reaser of Fermanian Business & Economic Institute in 2013 forecast that technology and business related to bioinspiration would generate $1.6 trillion of global GDP by 2030.

Laura Landau, who holds master’s degrees in biomimicry from the University of Arizona and the Biomimicry Institute and is a researcher in innovation and technology for the Amazonia 4.0 project, says biomimicry is a new way to look at the world. She says she believes ecological relationships and the wisdom of living organisms can guide human beings toward better ways of inhabiting the planet. “I don’t believe biomimicry should merely be seen as a tool for generating innovative solutions. It is a philosophy for looking at the next solutions we will need, because it transforms the outlook of those who use it, helping them to identify the best adaptations organisms have made and to be able to use what already exists without harming nature,” she says.

This story was first reported by Mongabay’s Brazil team and published here on our Brazil site on Mar. 18, 2019.