BORACAY ISLAND, Philippines — The bats that swarmed Boracay’s evening skies were once as iconic as the pristine white sand beaches that made this tiny island in the central Philippines one of the country’s hottest tourist destinations.

A survey in 1988 counted 15,000 resident bats. But as tourism exploded on the island, the bat population cratered. In 2017, at the peak of the tourism boom, conservationists conducting an exit survey counted only 2,425 bats flying off the island at sunset. By March 2020, a similar survey found numbers were down to a startling 30 bats.

The figure is extreme,” says Julia Lervik, president of Friends of the Flying Foxes (FFF), a group of conservationists and environmentalists that has been surveying Boracay’s bats since 2004. “We barely have any bats left on the island.”

The 2020 figure is doubly alarming because it comes after the island was temporarily closed to tourism and put under an environmental rehabilitation program.

Experts point to two key factors behind the decline of Boracay’s bats, both linked to the upswing in tourist numbers: locals catch bats and sell them to both foreign and local tourists as food, and bat habitat and roosting sites have been destroyed by the fast-paced development of resorts and tourist infrastructure.

This runaway development also fouled the island’s beaches and water. By 2018, the island was declared a “cesspool” by President Rodrigo Duterte, who ordered it closed to tourism from April to October that year. During the closure, Duterte ordered the creation of the Boracay Inter-Agency Task Force (BIATF), led by the Department of Environment and Natural Resources (DENR), to oversee the island’s rehabilitation. But almost two years into the process, the situation for Boracay’s resident bats appears to have only deteriorated.

Famous for its 11 kilometers (7 miles) of white sand coastline, the island is a haven for fruit bats or flying foxes, including the endemic golden-crowned flying fox (Acerodon jubatus), classified as critically endangered on the IUCN Red List; and native species like the giant fruit bat (Pteropus vampyrus), the largest fruit bat species in the world, and the small flying fox (P. hypomelanus).

Bats around the world have recently gotten a bad reputation as potential carriers of disease following the COVID-19 outbreak. But in Boracay, cave-dwelling bats are known to help reduce outbreaks by feasting on the mosquitos that spread dengue to humans.

They also help disperse fruit seeds across Boracay and nearby islands, helping keep the ecology of the province in balance.

“[Bats are] considered an important part of the island’s booming tourism industry since bats regenerate the remaining green forest of Boracay,” Lervik says. “It enhances the beauty of Boracay especially when seen in the air as tourists planes pass by. Boracay’s potable water source also comes from the forest in the mainland, which the flying foxes reforest.”

As the bat population dwindled, the numbers of mosquitoes surged and dengue cases increased, echoing a trend seen across the province of Aklan, where Boracay is situated.

In 2019 alone, 4,680 dengue cases were recorded in Aklan, more than three times the number recorded in 2018. “Several of them have been recorded in Boracay, especially in Manoc-Manoc,” says Cornelio Cuachon Jr. of the Aklan provincial health office. 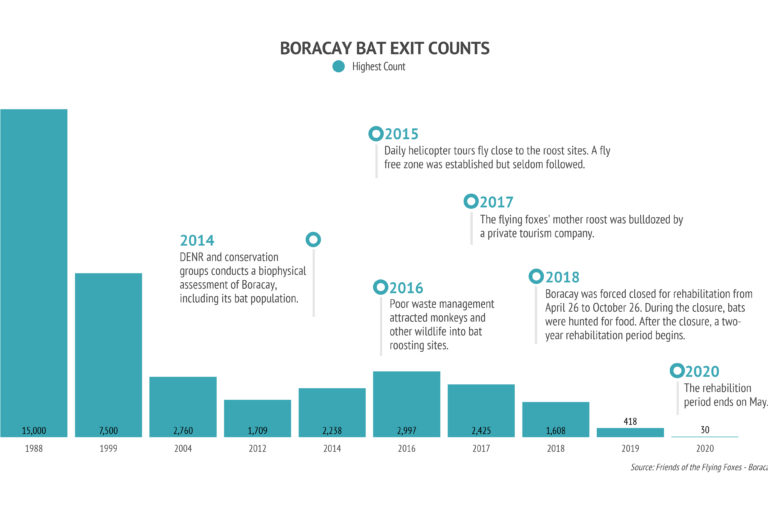 “We also found several breeding grounds of mosquitoes in Boracay,” Cuachon says. In 2019, the villages of Yapak, Balabag and Manoc-Manoc were considered high-risk areas for dengue.

Yapak Beach was once an important roosting site for Boracay’s bats, says FFF’s Lervik, quoting from a significant series of studies that point to the northern portion of the island as a key site for the bats. But these same sites are the ones that have borne the brunt of the tourism bane.

Some of these roosting sites fall within a private property, where a 219-room upscale resort has been built. To regularly monitor the bats, the group has to get permission from the developers.

Other island businesses have also fallen short of implementing sustainable practices in dealing with the bats. Lervik cites instances of boatmen and tourist guides bringing visitors near the roosting sites as part of their tour packages. Some private companies even offer helicopter tour packages in bat areas. It’s also common to hear of guides catching bats and making them fly for the delight of their guests.

Daily direct flights have also stressed the bats, Lervik says. “The airlines in nearby Caticlan [airport] now have sunset and sunrise flight schedules, arriving in Caticlan at exactly the time the bats fly on their way to feed in the mainland [island of Panay] and it directly impacted the bats during the sunset and its return early in the morning,” Lervik says.

The forced closure of the island, however, yielded some concrete results. Levels of coliform, or bacteria from feces, on the main beach have dropped more than a hundred-fold since April 2018. At least a dozen of resorts and residential areas that violated environmental guidelines were demolished during the closure. Other establishments that violated guidelines were closed, though the DENR has yet to publicly release the list of non-compliant establishments.

But these measures still haven’t been enough to improve the flying foxes’ population. FFF sees a turning point in this: the destruction of the bats’ mother roosting site in 2017 by Mabuhay Maritime Express (MME), a subsidiary of the country’s flagship carrier, Philippine Airlines. MME bulldozed around 70 trees within a 500-meter (1,640-foot) stretch without a permit.

Ilig-Iligan beach, located in the northeast side of the island, is a bat roosting site. Image by Alexey Komarov via Wikimedia Commons (CC BY 3.0)

The group, set to roll out a ferry service from Caticlan port to the island, sought to develop a road connecting the property to the beach. This has impacted the bat population significantly, FFF says. “This site is where the bats normally roost and nurture their pups (babies) as nursery trees.”

The company was fined by the environment department. But a year later, when Boracay reopened after the closure period, MME launched its ferry service that offers a more comfortable ride from the mainland of Aklan to Boracay’s beaches.

On the main island of Panay, wind farms pose an additional threat to Boracay’s flying foxes. The wind farms, in operation since 2018, lie directly in the flight path of the bats, FFF says, and are killing them. “Dead bats were found regularly on its grounds.”

Back on Boracay, the stresses on bats persisted even during the closure. Some of the local population of 40,000 people, whose livelihoods depend heavily on tourism, were reportedly catching and eating the flying foxes to make ends meet during the closure, FFF says.

The status of Boracay’s bats prompted the environment department to create a management plan for all the bat species in the Philippines, which the department says is already in the pipeline.

There are a total of 79 species of bats in the Philippines, of which 38 are endemic. Twelve of these endemic species, including 11 fruit bats, are threatened, says Anson Tagtag of the DENR’s Biodiversity Management Bureau.

“We are going to develop a management plan so that we will be guided on what types of activities to be undertaken,” Tagtag said in a statement. “We will be able measure how we progress throughout the years, and we will see and connect how bat conservation will contribute to human well-being.”

It was also FFF’s surveys that drove DENR Secretary Roy Cimatu to order the Boracay task force to come out with a policy to delineate certain areas of the island as critical habitats for flying foxes.

It’s the same recommendation given by pioneering bat researchers Harvey John Garcia and Ma. Renee P. Lorica, who conducted a study of the island’s flying mammals to seek out the patterns of the bats’ roosting sites.

With the changes in the island’s forest coverage and the threats bats face due to tourism-related developments, the researchers recommended reviewing the island’s existing bat roosting areas and fast-tracking the designation of these areas as critical habitats. They also concluded that one of the best ways to protect the island’s flying foxes would be to adopt the golden-crowned flying fox as the island’s flagship species.

“This will not only promote awareness to conserve the critically endangered bats of Boracay but will also promote local pride as an added attraction for the tourists,” the researchers say.

But the much-anticipated designation as a critical habitat, however, has been slow to materialize. Species-specific studies have been conducted as far back as 2014, yet the government has dithered on the prospect, FFF says.

Once declared a critical habitat, the ecological management of the resort island will fall under the local government. During the island’s closure, however, local officials including Aklan Mayor Ceciro Cawaling and former Malay mayor John Yap faced criminal and administrative charges for grave misconduct leading to the environmental degradation of the island. Cawaling was later dismissed from office.

“In 2018, the DENR announced that a declaration of a critical habitat would be made,” FFF says in a statement. “While it has been very vigilant in implementing other initiatives, such as road widening and [widening easement zones] on the beach, why the hesitation from the government to declare a critical habitat for a worldwide endangered species?”

With the declaration of a critical habitat in the island making little progress, the coronavirus pandemic has piled on more pressure, forcing cancellations of official meetings.

Livino Duran, the regional DENR assistant director for technical division, says the proposal is still under evaluation. “I was told that the committee has approved guidelines on the said proposal as part of the process for the declaration of certain area of Boracay a critical habitat,” Duran tells Mongabay.

However, the task force has yet to schedule a discussion of the proposal, says Natividad Bernardino of the Boracay Inter-Agency Management Rehabilitation Group (BIARMG). The priority, the group says, is to examine the possibility of extending the task force’s operation for another year and a half.

Its term was set to end this May.

As time ticks for the flying foxes, the FFF has compelled the government and its task force to focus on Boracay’s endangered wildlife. “Roost site protection is crucial for the bats’ survival,” the group says in a statement. “Why so slow in protecting them?”