A watery onslaught from sea, sky and land in the world’s fastest-sinking city

Jakarta is subsiding at record rates, thanks to decades of unfettered and illegal draining of the city’s aquifers for water that have left 40% its land below sea level. Solutions abound, but the scattershot response may not be enough to keep the city above water. Words by Johan Augustin; Images by Jonas Gratzer. by Johan Augustin on 27 April 2020

JAKARTA — The Waladuna mosque is submerged in a meter of seawater, about 3 feet deep. It’s low tide in northern Jakarta. During high tide, the water creeps up to the moss- and seaweed-covered roof of the abandoned mosque, a building that has become a symbol of Jakarta’s direst problem. Children play on top of the 4-meter (13-foot) concrete barrier that was built next to the mosque to temporarily halt the advance of the Java Sea. A man fishes from a pile of rocks next to the inundated building, which dates back to the 1980s, when sea levels were much lower. Scattered nearby are the concrete skeletons of abandoned warehouses and fish factories, long since shut down and a reminder of both a thriving past and a not-so-bright future.

Jakarta is sinking. And it’s doing so at a rate faster than any of the world’s megacities — from 1 centimeter (about half an inch) a year in some areas, up to 20 cm (8 in) in the worst-affected areas, like here in northern Jakarta.

Rising sea levels pose a threat to many coastal cities around the world, with climate change the driving force in most of these cases — from Dhaka and Bangkok in Asia, to Alexandria and Lagos in Africa, to Houston and New Orleans in the U.S. Late last year, exceptionally high tides caused severe flooding in Venice.

Forty percent of Jakarta is already below sea level, but the main reason why the city is sinking is not climate change. Instead, it’s a thirst for clean water. Less than half of the city’s population has access to piped water, leading to a proliferation of wells and pumps, often installed illegally. Over the decades, they’ve depleted the aquifers beneath the city, leading to land subsidence.

The floodwaters in Kampung Teko, Jakarta, cannot wash out to sea because the area lies below sea level. Image by Jonas Gratzer for Mongabay.

The city doesn’t actually lack freshwater; annually it has 300 days of rain, and 13 rivers flow through it. The problem is that this water isn’t retained, since areas that used to be marshlands with mangroves have over the years been filled in and paved over to make room for shopping malls and high-rise office and apartment buildings. An estimated 97% of Jakarta’s wetlands have been transformed into concrete jungle.

Over the past two decades, areas in mostly northern Jakarta have sunk by up to 4 meters, dropping them well below sea level and making it physically impossible for rain and river water to drain out into the bay. That creates an immense problem, says climate expert Dicky Edwin Hindarto, the coordinator of the Jakarta-based organization Indonesia Low Emission Network.

“Jakarta has no green spaces left. We need to increase areas of parkland and mangroves instead of surfaces covered in concrete,” he says.

Elisa Sutanudjaja, from the Jakarta-based think tank Rujak Center for Urban Studies, agrees on the importance of reducing the number of permits for new developments. She works with a number of organizations and local communities to implement sustainable urban solutions, and has been the driving force behind halting the construction permits for 17 artificial islands off the north coast. In an interview along the tree-lined banks of Citra Lake, one of hundreds of newly created freshwater reservoirs in Jakarta, Elisa lays out the fundamental problem: with the many torrential rains that frequently sweep over the city comes flooding — and the water has nowhere to go because the ground is mostly paved over with concrete or asphalt.

“We must stop existing permits and instead create new green spaces,” she says.

The problem is so bad, it’s been cited as one of the reasons behind a plan to move Indonesia’s capital to Borneo. 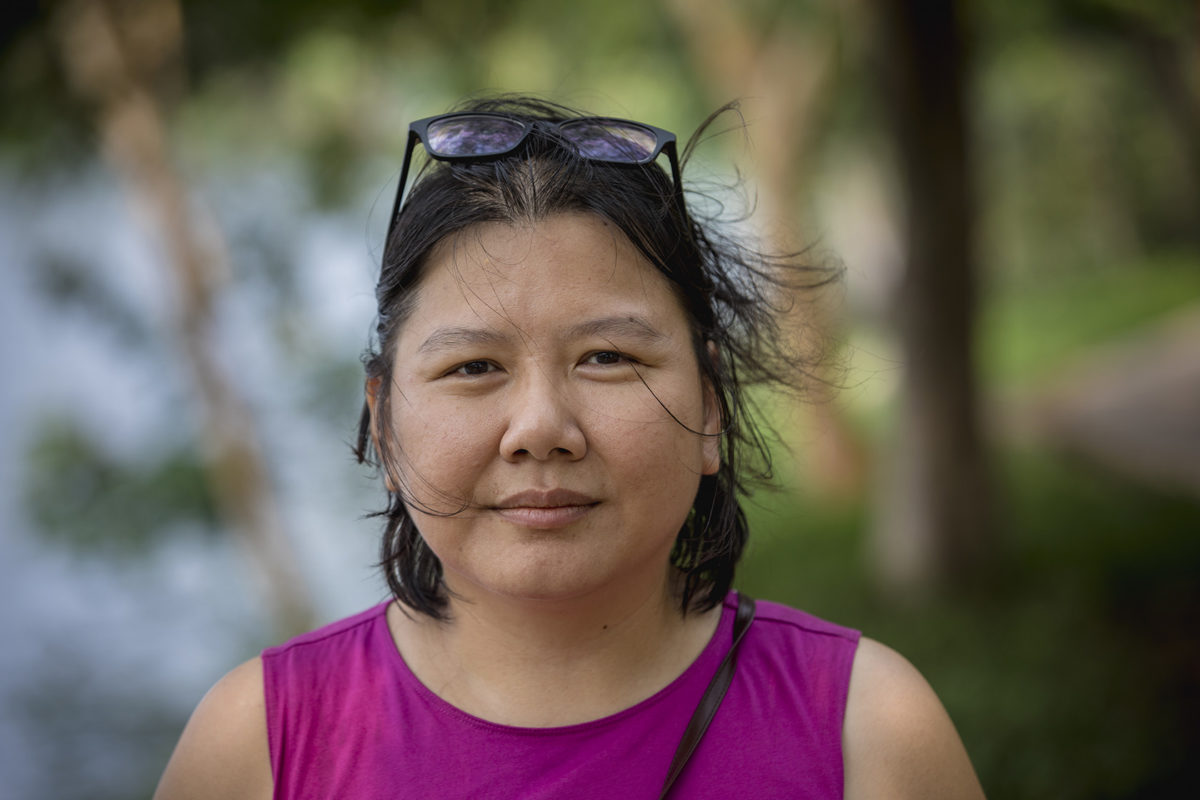 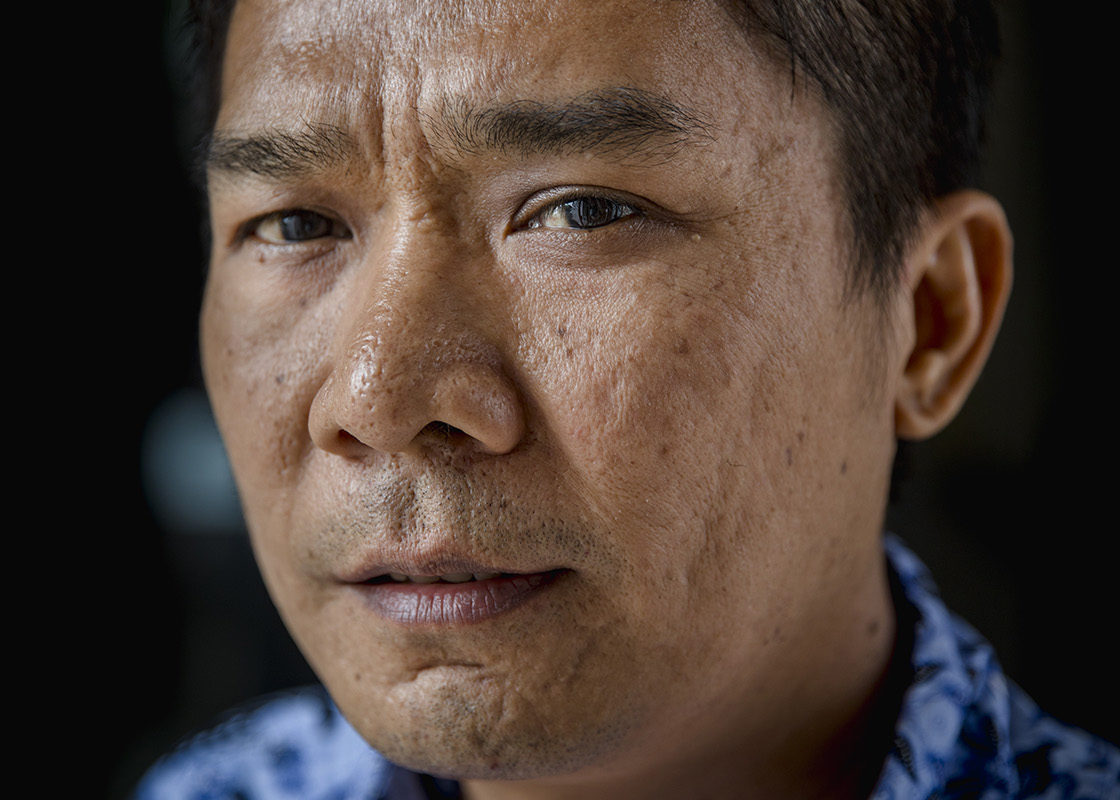 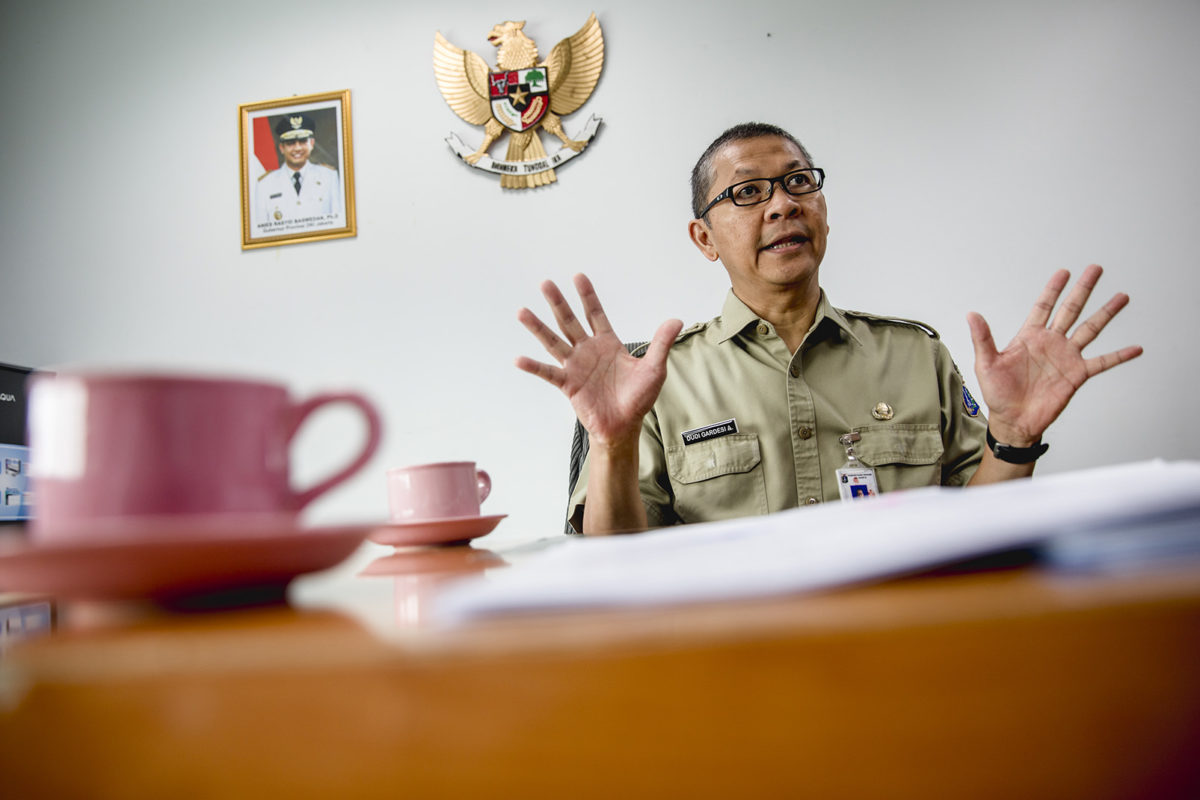 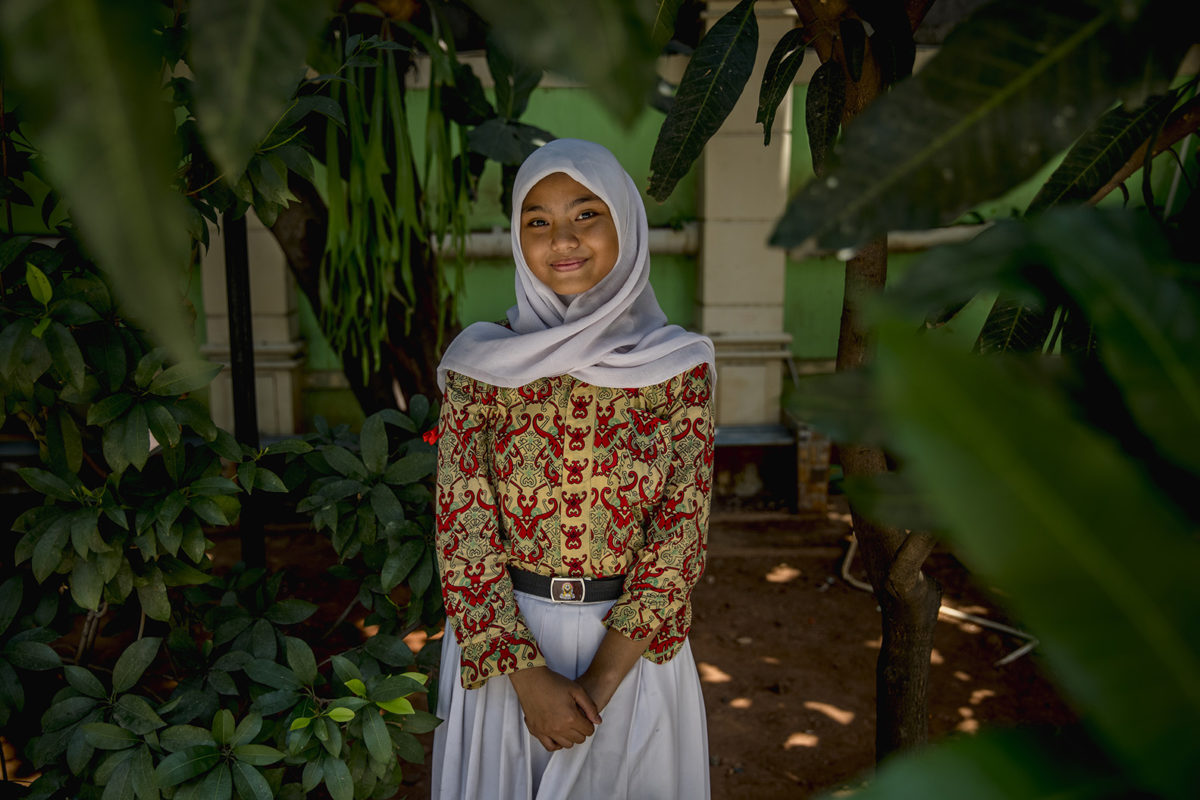 Running out of time

Yayan Suprianto views the water surrounding his house. He lives in a shed of wood planks and a rusty tin roof sitting on stilts over brackish water that’s full of algae and plastic trash. He’s a factory worker from western Java, one of millions of Indonesians who have come to the capital in search of jobs and a better life. The greater Jakarta area is home to 30 million people — the world’s second most populous conurbation after Tokyo. Yayan lives in Kampung Teko, a village of 300 people and considered to be Jakarta’s only “floating village.” What used to be lush paddy fields as far as the eye could see have all been replaced by a huge expanse of water. Years of industrial waste discharge and garbage dumping from nearby households have contaminated the water, rendering it unsuitable for drinking. Frequent rains add to the water volume and lead to floods.

The government has invested in pumps, but they aren’t enough to keep the water level down.

“The water rises every year. Before we used to have floods only during the rainy season, but now they come more frequently with the rains,” Yayan says. He adds, “We probably have to move back to our village.” 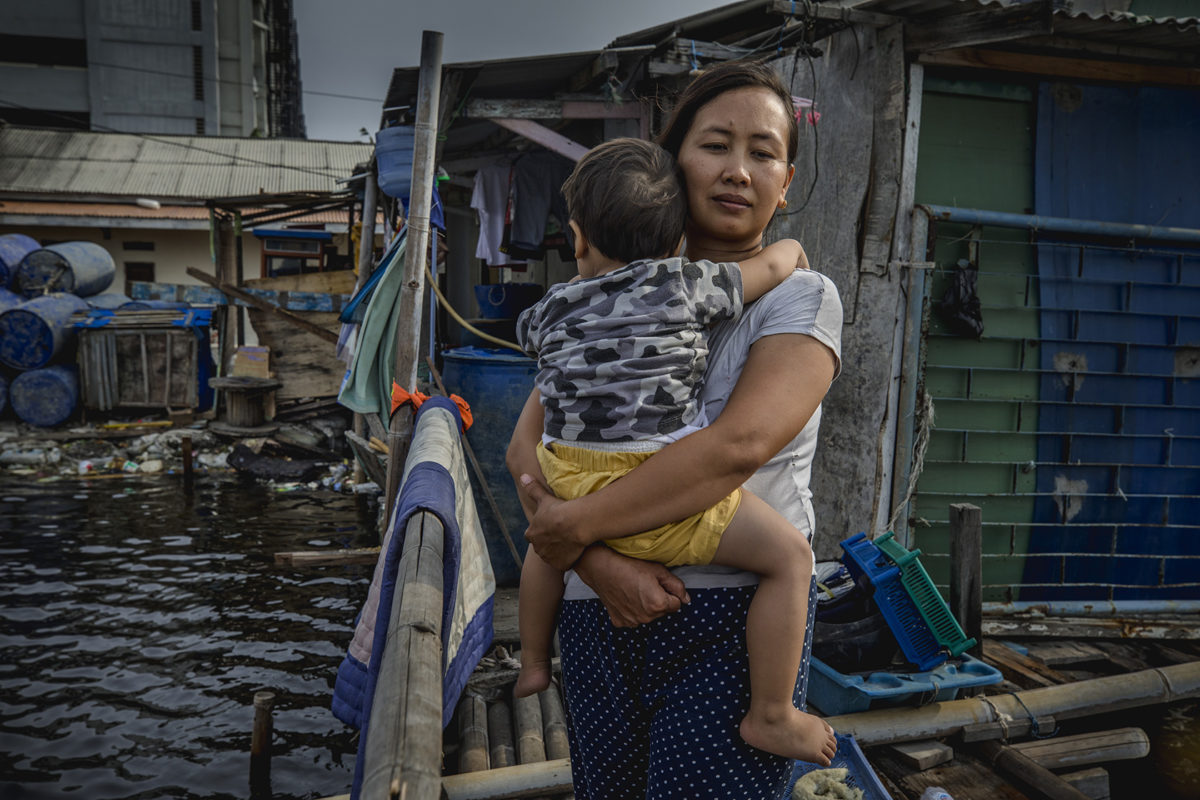 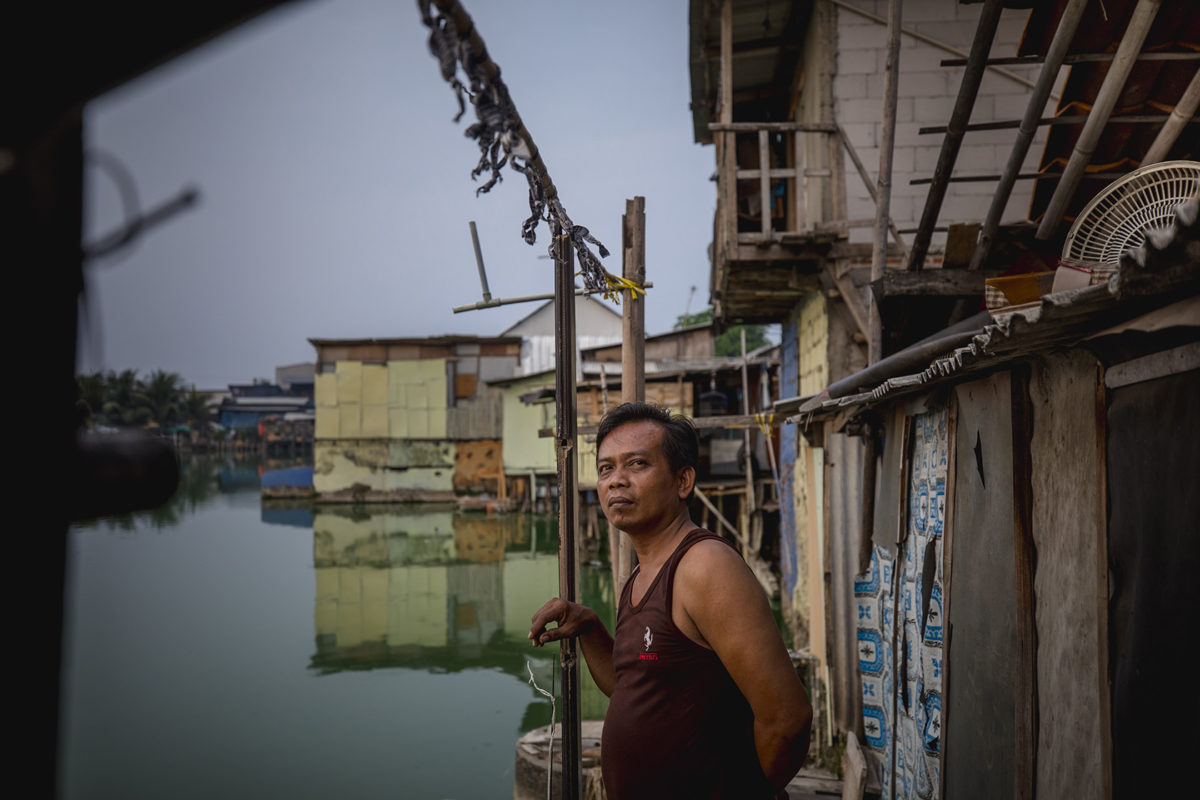 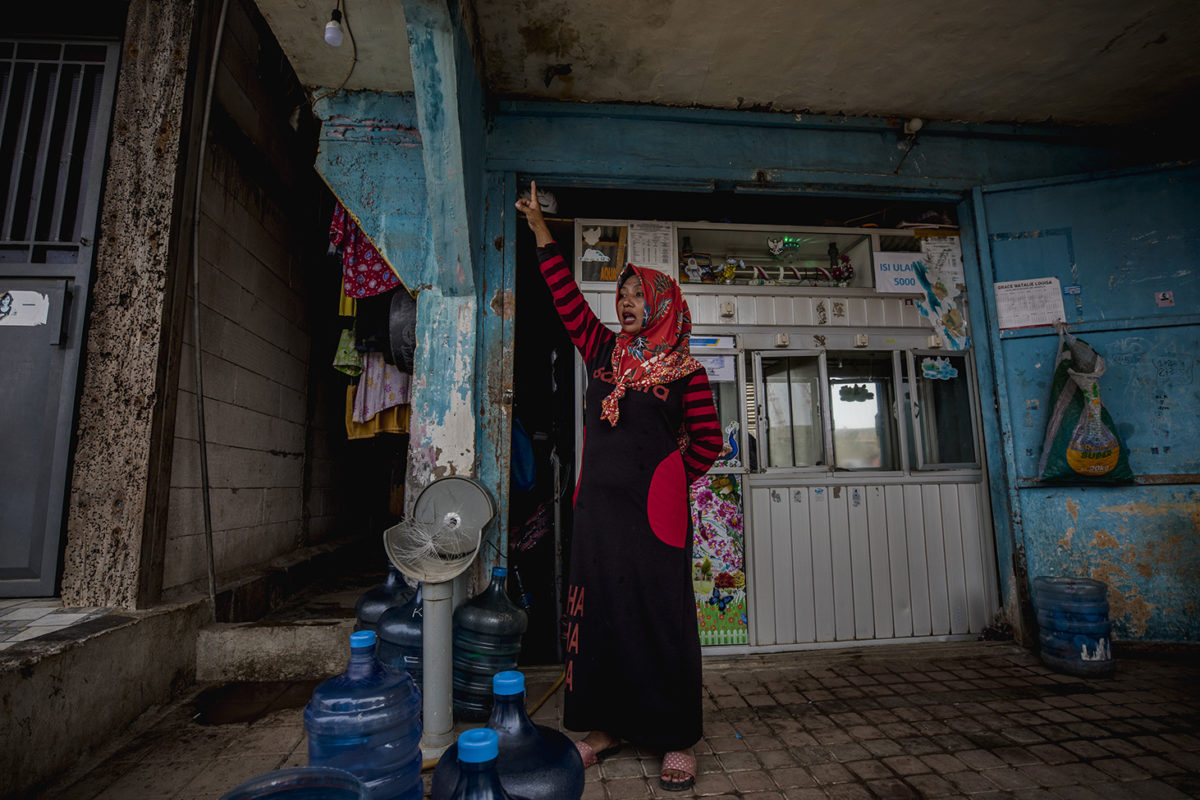 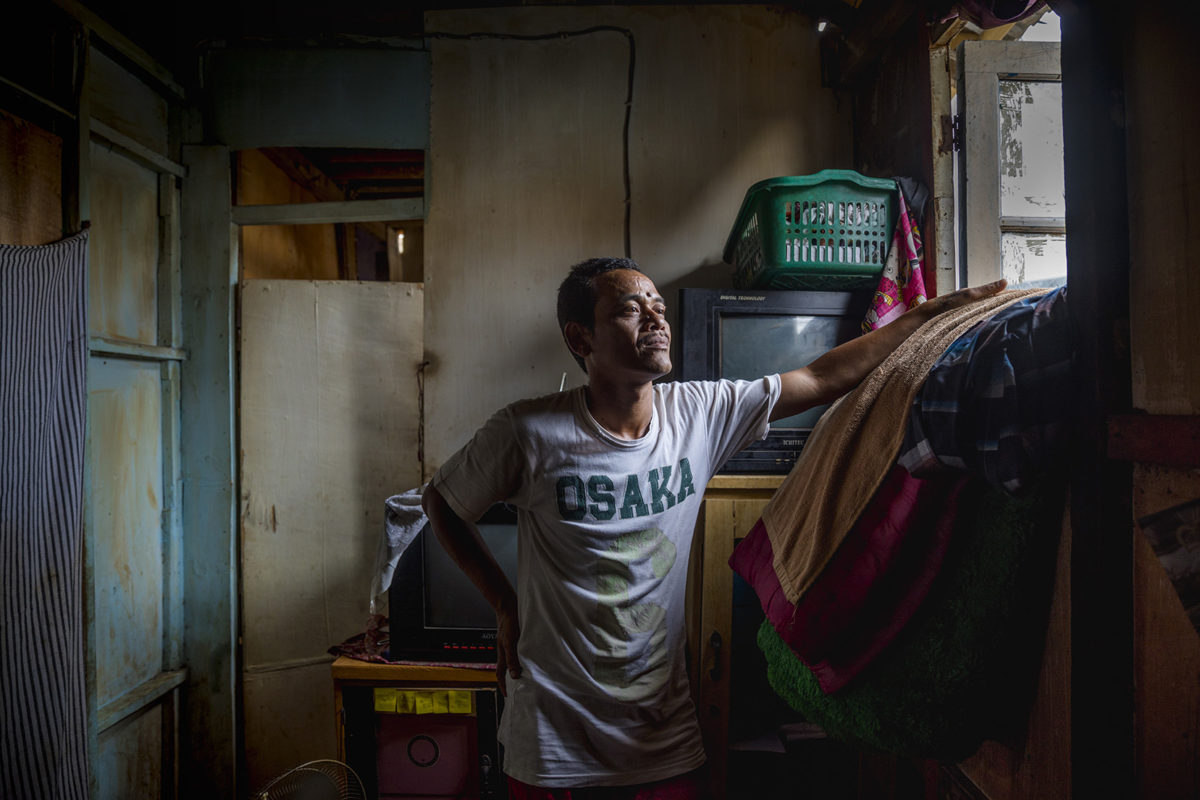 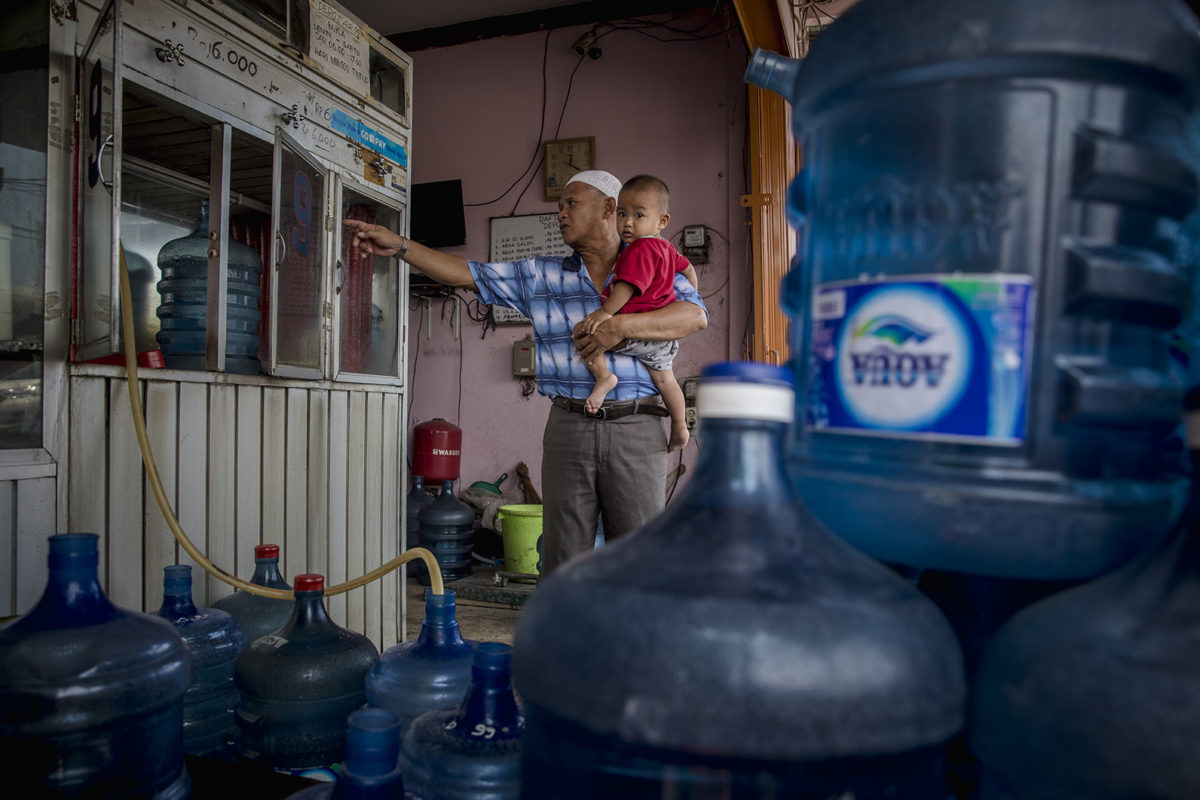 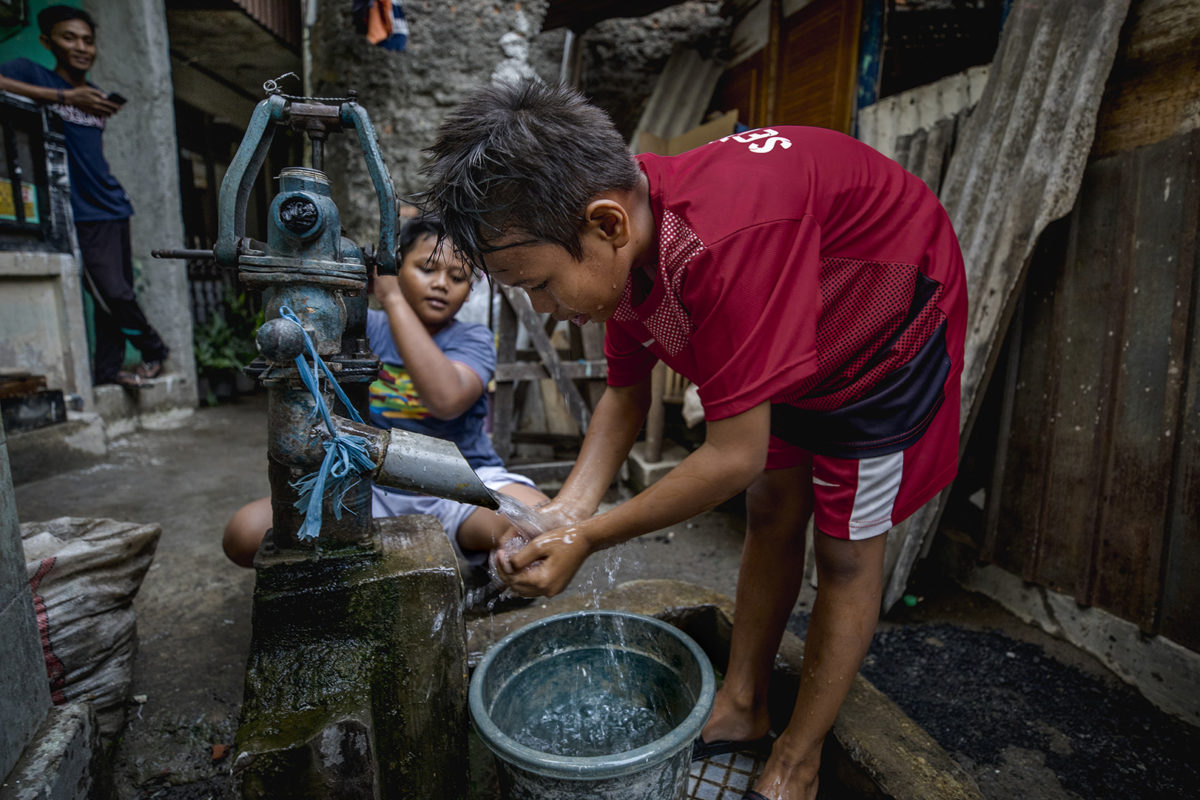 Experts say the city has a decade to act. Business as usual would result in parts of Jakarta being permanently inundated by the Java Sea, and the displacement of millions of people. By some estimates, a quarter of the city could be underwater in five years, especially the north, which is home to 2 million people and particularly prone to floods.

The government has begun to take action to turn things around. Togas Braini is the provincial government’s head of geology and groundwater. He stresses the importance of controlling and preserving groundwater levels, through closing down illegal wells and building new infiltration wells to collect rainwater, which can then be used as sources of drinking water. There are about 4,500 registered wells in Jakarta, and an unknown number of illicit ones.

These measures are meant to ease the pressure on the aquifers by providing an alternative source of fresh water. But the perennial problem of pollution remains a hurdle.

Trash clogs up waterways in Jakarta, constricting them and exacerbating flooding. Image by Jonas Gratzer for Mongabay.

In Manggarai, in south Jakarta, black sludge oozes through the canals, and the smell of raw sewage is strong. The area’s water pipes function irregularly; Manggarai residents depend on large water tanks, or groundwater, which they’re permitted to pump between certain hours.

“We rely on the trucks bringing water in containers,” says Hayana, a resident. “It hasn’t rained in a long time, and there is barely any groundwater left.”

Manggarai is where the West Flood Canal starts. It was completed in 1919, under the Dutch colonial government, and meant to carry runoff from Jakarta’s biggest river, the Ciliwung, straight out to sea. Here, sanitation workers from the city’s environmental department, known as the Orange Army because of their uniforms, rid the waterway of plastics and other waste floating on the surface. The cleanup campaign for the flood canal and other rivers across the city began in earnest in 2016. Sumarto, who joined the Orange Army three years ago, says there’s been a significant difference since then. “Before we started cleaning up the river, there was so much waste that we could play football on top of it.”

There’s still some visible trash floating by, but sea grass has returned to the bottom of the canal, and insects and fish flit along the surface.

“The wildlife is coming back. The next step is to replant bushes and trees along the rivers,” Sumarto says. 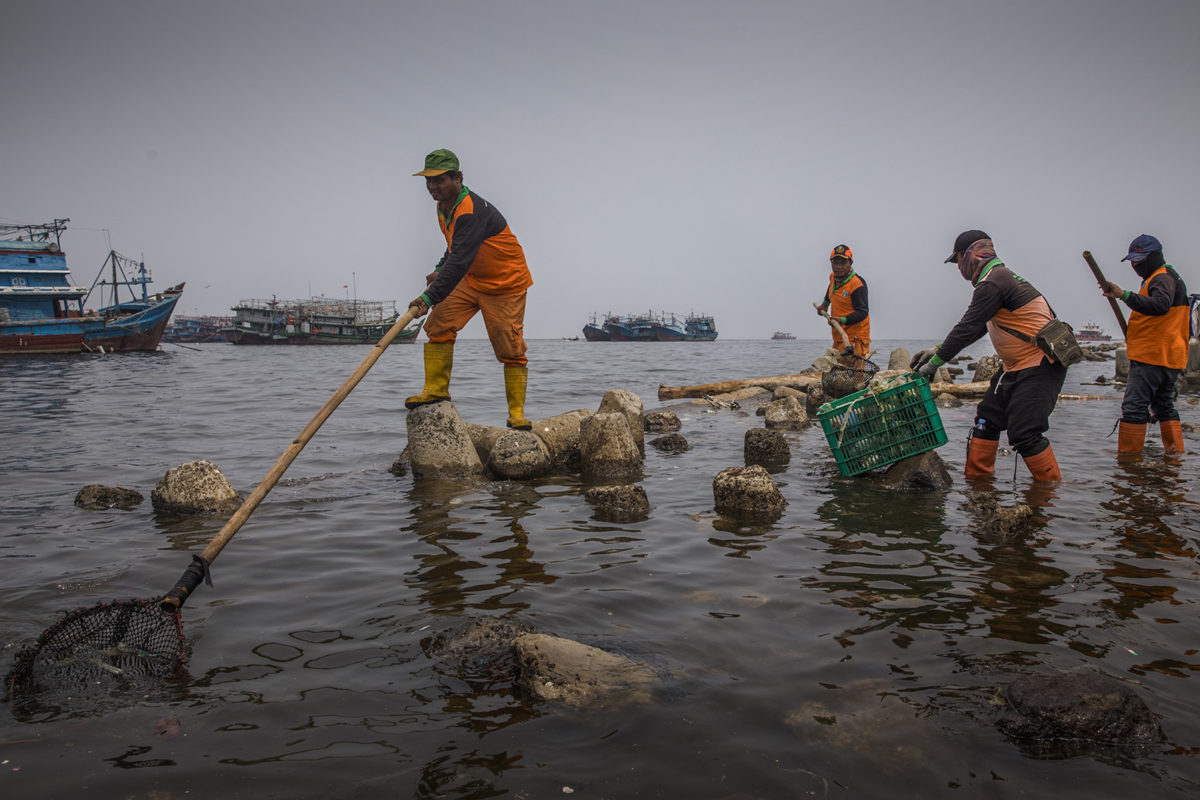 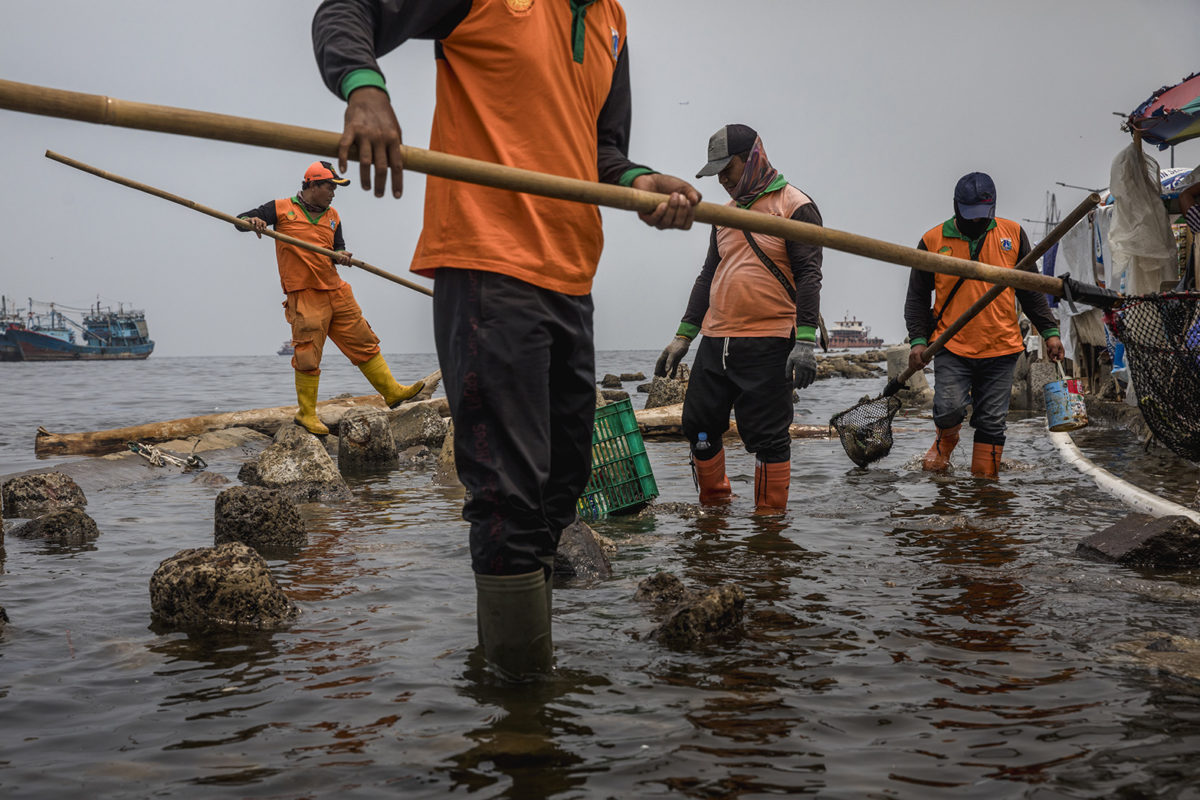 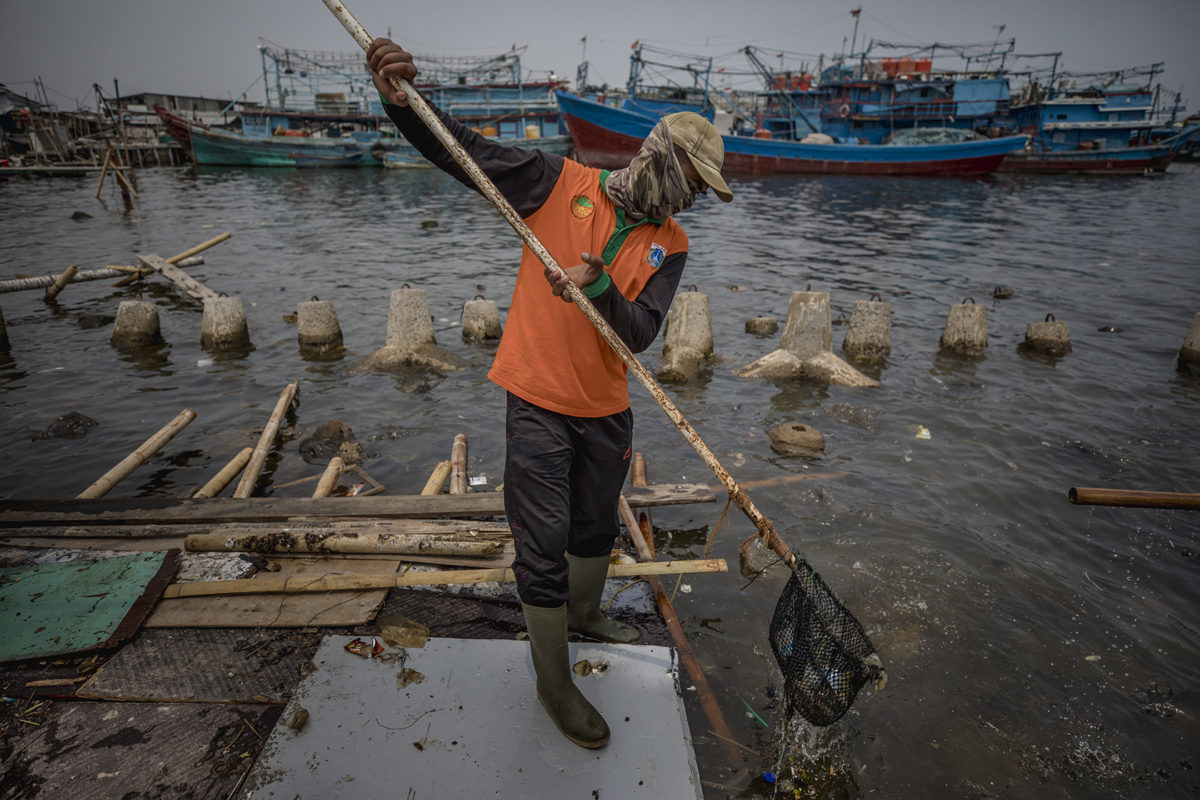 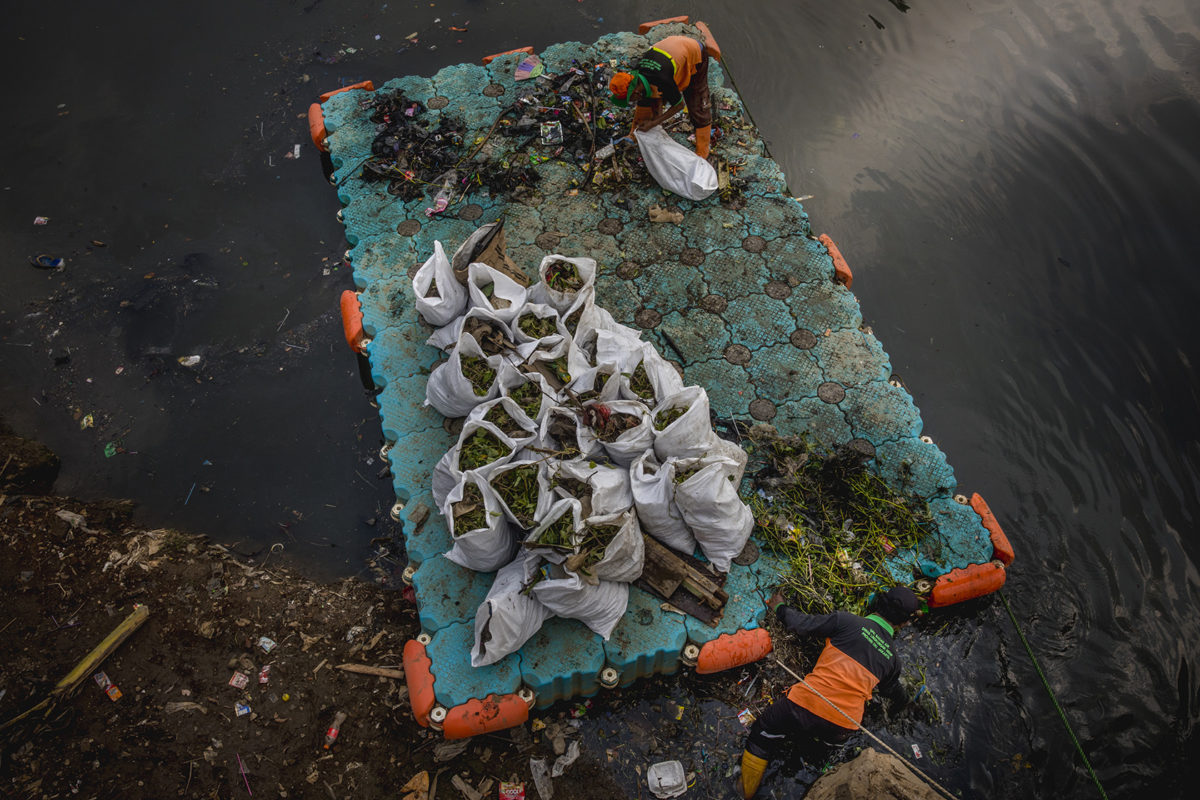 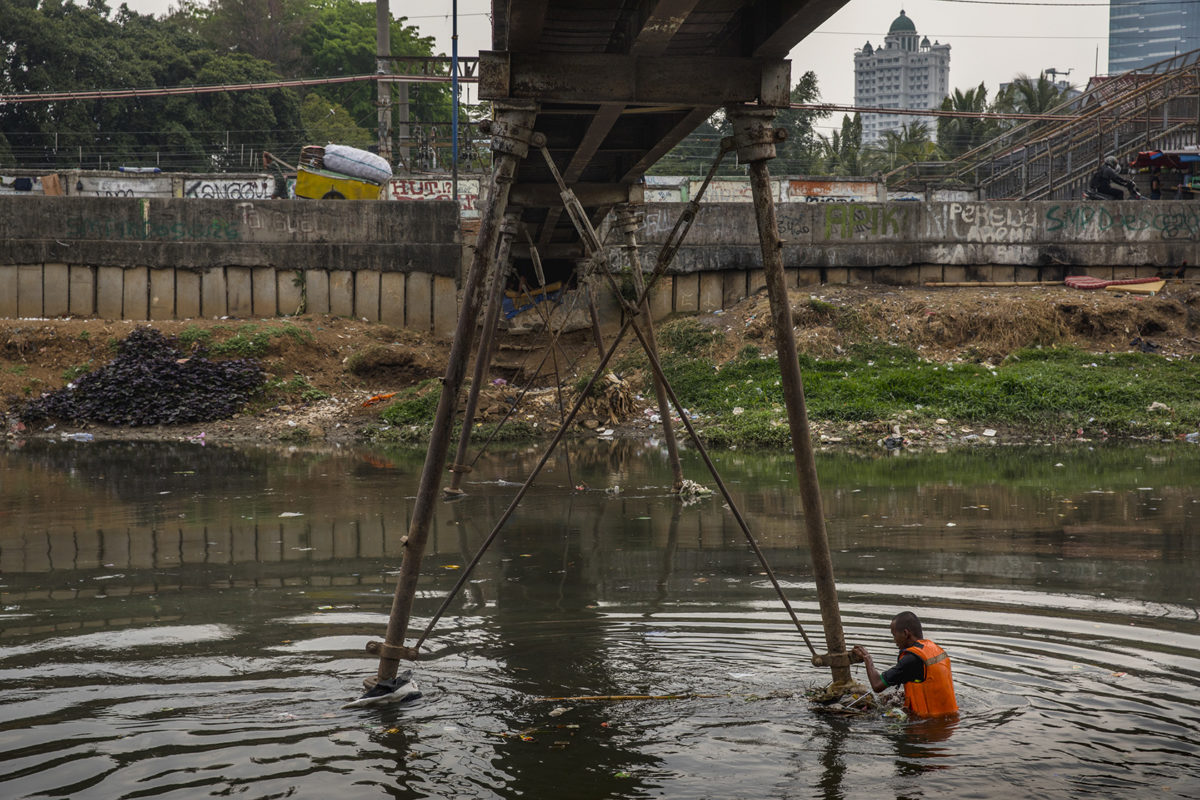 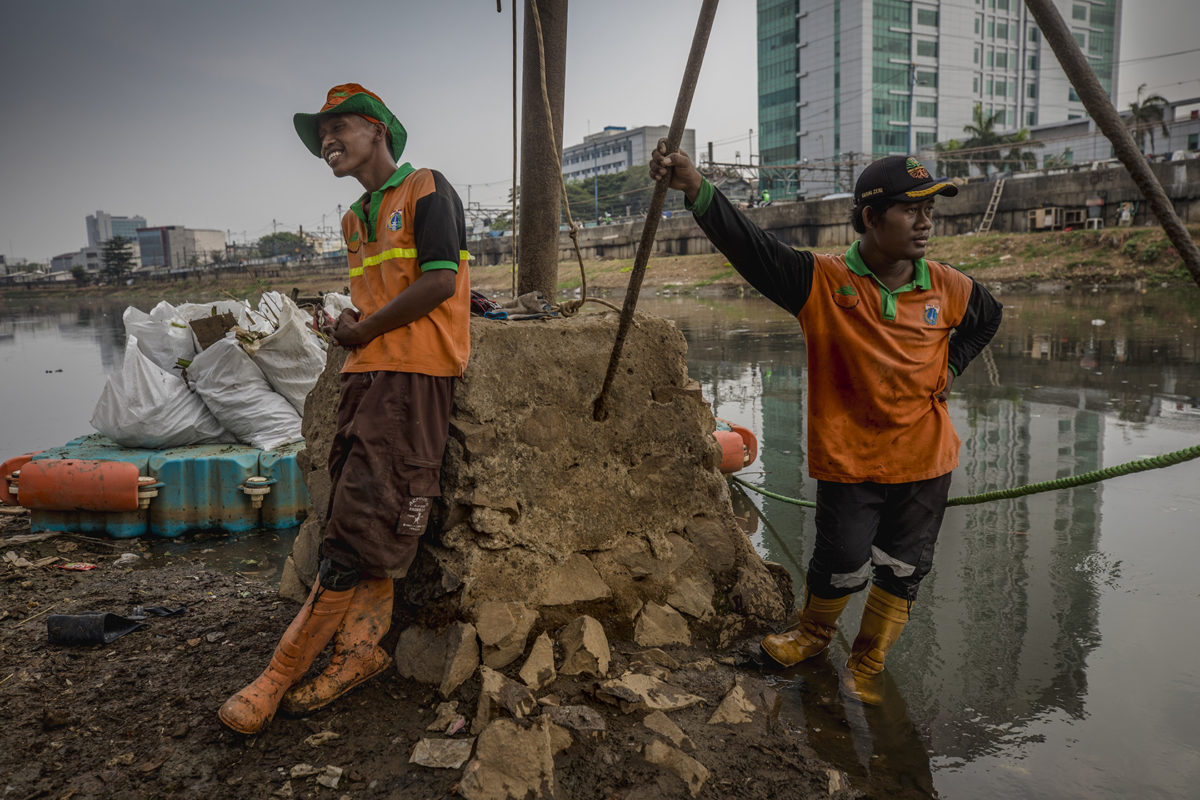 Other steps are being taken toward greater sustainability. The provincial government is moving riverside slum dwellers to high-rise social housing so that it can widen the rivers. It has also frozen new permits for shopping centers and is carrying out replanting of mangroves in the remaining wetlands. The importance of sustainability is being acknowledged more widely, particularly among the young generation of Indonesians.

The government’s effort to restore clean, free-flowing waterways is aimed at both reducing the risk of flooding and providing freshwater sources. The process is showing results, says Dudi Gardesi, the head of the provincial government’s division for water resources. He says one major issue has been when neighboring districts pollute in upstream sections of the rivers, hence the need for greater interjurisdictional cooperation.

“We will subsidize cleanups in other districts, build new infiltration wells and reservoirs, and, through regulations, decrease the extraction of groundwater,” he says.

To achieve real change, Dudi says, people must stop dumping waste in waterways, and strenuous regulations on discharge from factories and sewage should be imposed and enforced.

That requires a change in public attitudes to littering, so the government is starting with the most impressionable demographic: schoolchildren. The Jakarta government has introduced environmental science in the provincial school curriculum, focusing on sustainability.

“We have set aside a higher budget for education. I think we can reach the goals to have clean water in Jakarta by 2030,” Dudi says.

The sea wall in the Gedong Pompa neighborhood of Jakarta. This area of the city lies below sea level. Image by Jonas Gratzer for Mongabay.

State Senior High School No. 27, or SMAN 27, is one of Jakarta’s approximately 100 so-called green schools. These are public schools where environmental science is part of the curriculum, and sustainability is taught in all subjects. At SMAN 27, students and teachers have dug 13 infiltration wells to collect rainwater  and mitigate flooding. Plastic bottles and single-use plastics are prohibited; instead, the students bring their own bottles to school.

“The younger generation has a different mindset,” says 16-year-old Diah Oktavia. “We want to recycle, remove plastics and have a smaller CO2 footprint than the older generation.” 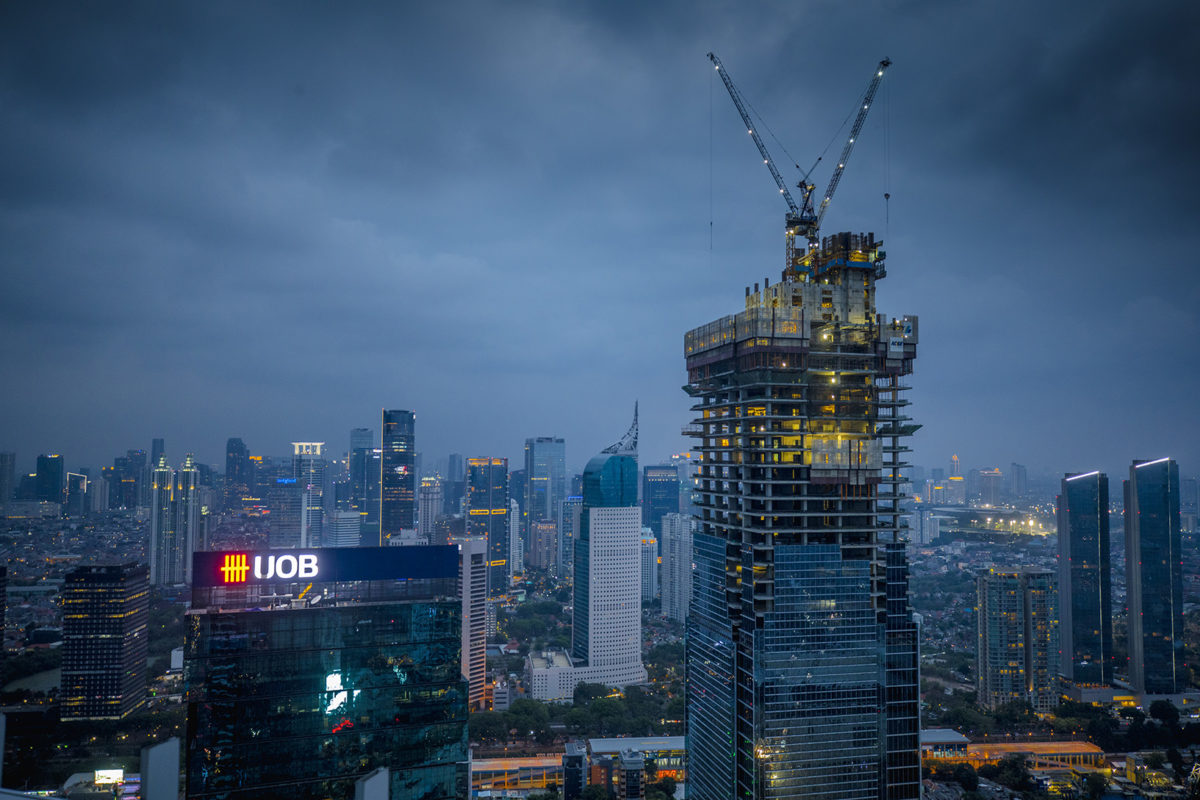 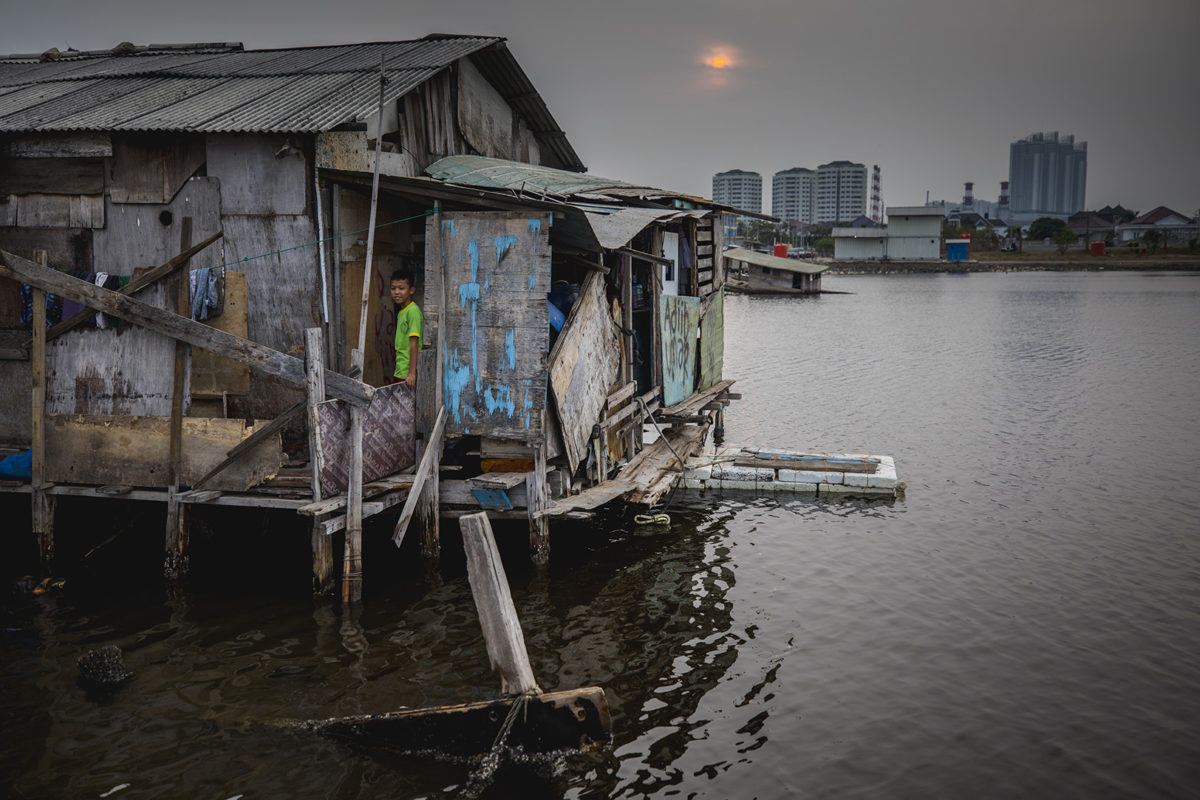 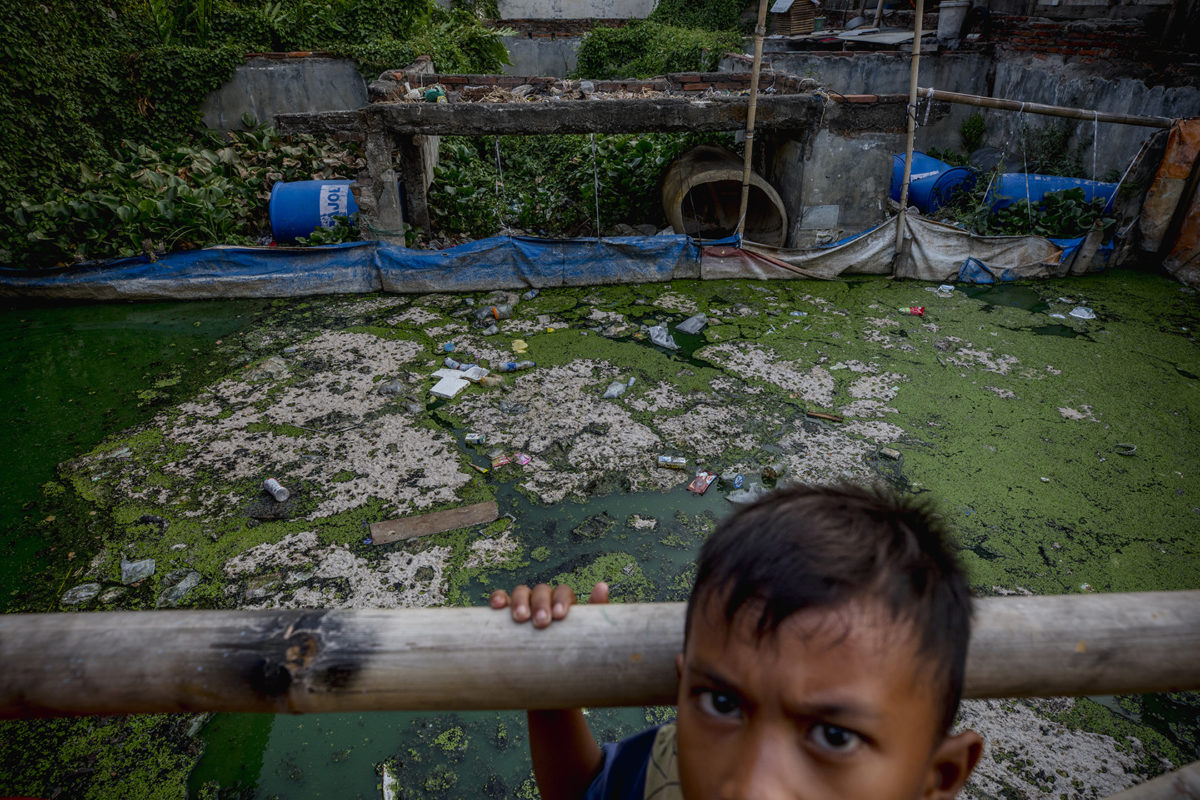 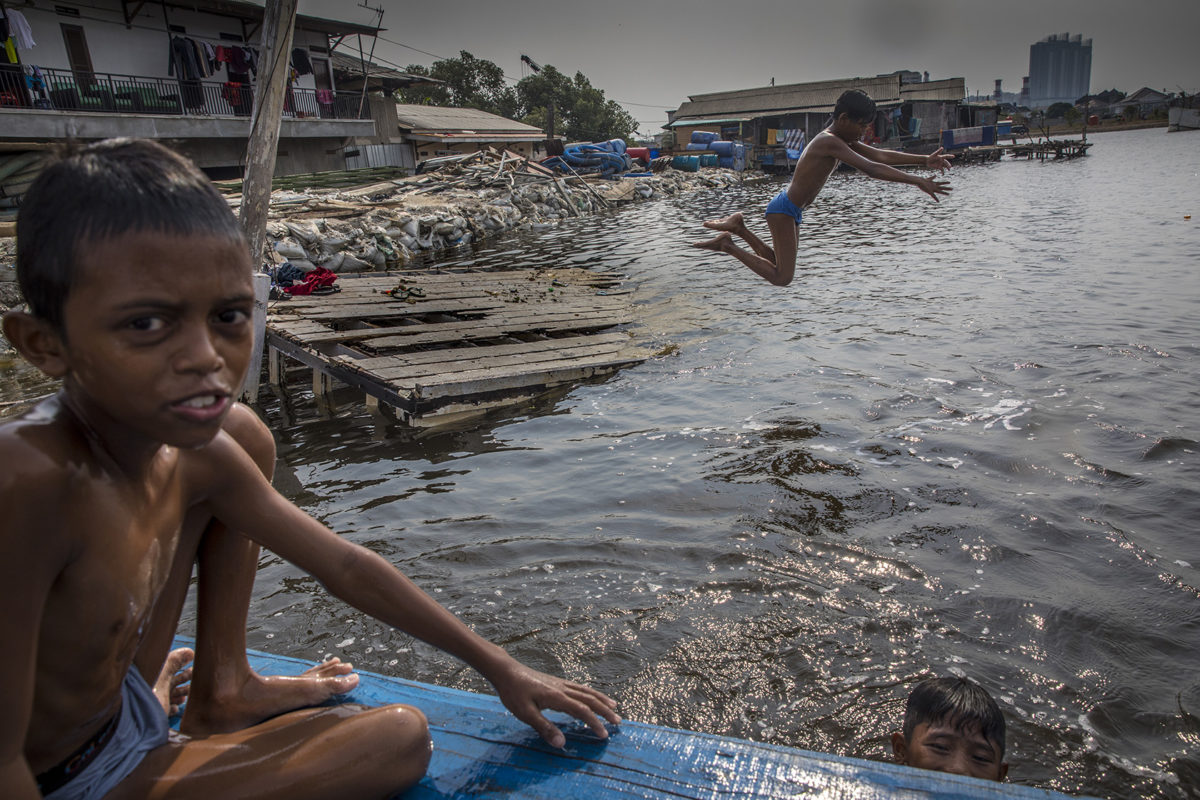 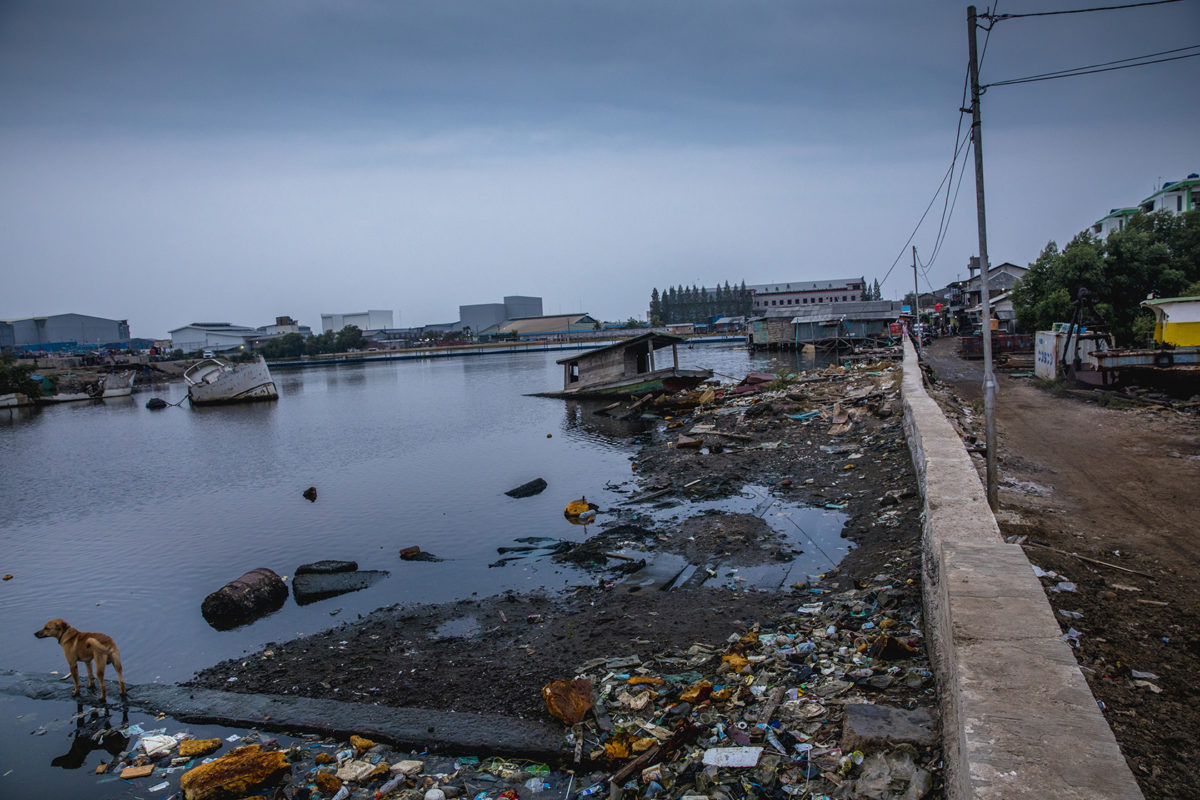 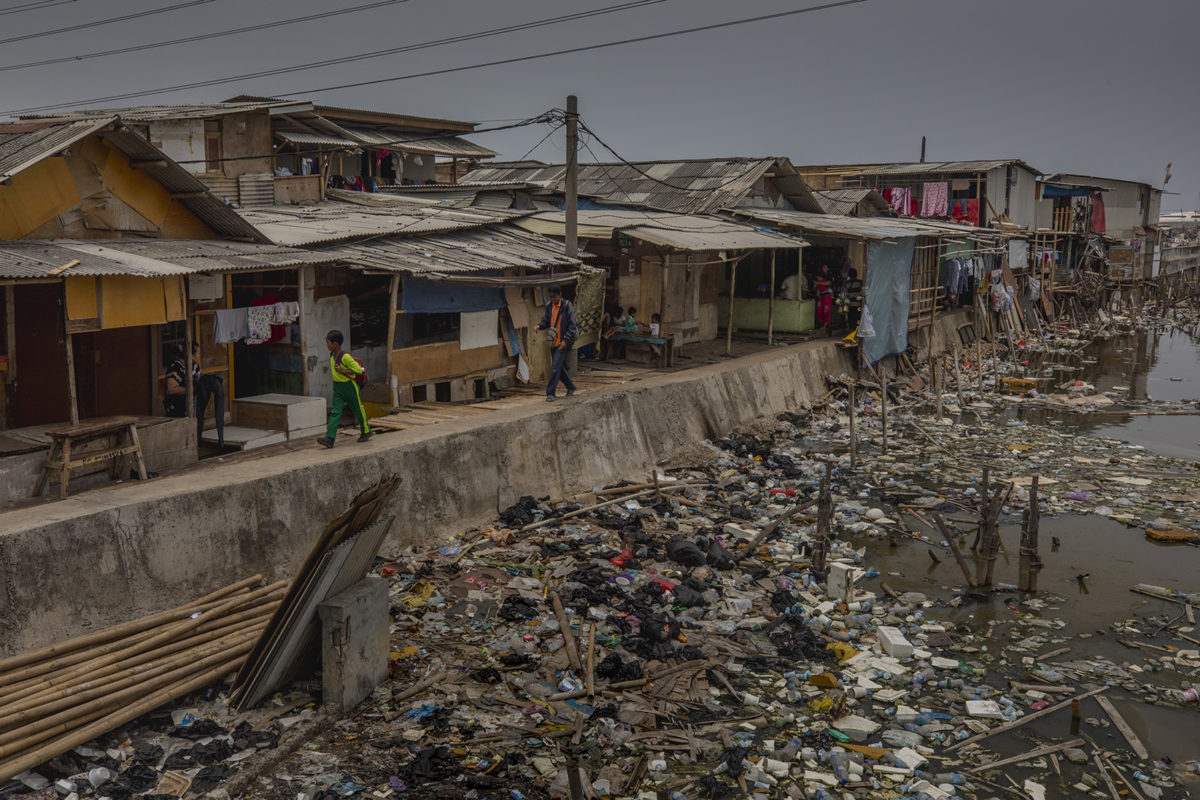 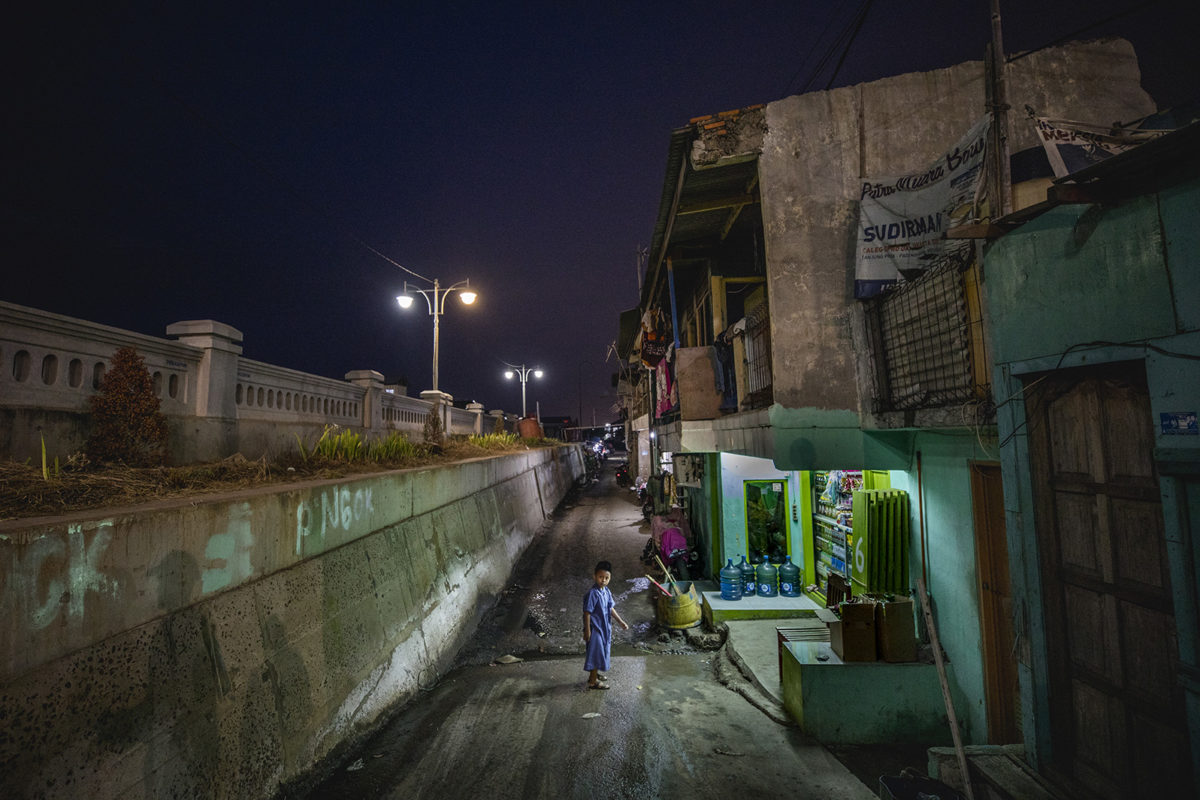 Green schools and cleaner rivers aside, the sinking of the megacity is an increasingly urgent topic. Adding climate change to the mix — bringing with it rising sea levels and increasingly severe storms — paints a grim picture for a city already struggling to stay above water.

Muara Angke is a kampong, or urban village, in northern Jakarta. Here,  the Orange Army collects plastic trash in hoop nets along a concrete seawall built to protect residents from the advancing sea. The wall stretches 8 kilometers (5 miles) now, but once completed will run 20 km (12 mi).

Dahlan lives with his family next to the wall, in a wooden stilt house. He raised the height of the house by a few meters before 2017, when this part of the wall hadn’t been built yet, to escape the rising sea levels. Now he’s facing yet another imminent threat: increasingly severe rains that cause frequent floods.

“The rainwater gets trapped in here, and has nowhere to go,” Dahlan says, pointing at the kampung hemmed in by the seawall.

Climate change and the fact that this part of Jakarta is sinking at a rate of 20 cm annually may soon force Dahlan and his family to move to an area less prone to inundation.

“The government has promised to move us, the only question is where,” he says. “We cannot afford to live in other areas.”

Banner image of a boy walking along the sea wall near the sunken Waladuna mosque in Jakarta, a symbol of the city’s rapid rate of land subsidence. Image by Jonas Gratzer for Mongabay.