In a report published last month, WRM also says Olam is failing to fulfill commitments made to villagers in the central-southern province of Ngounié before tens of thousands of hectares of new oil palm plantations were established. 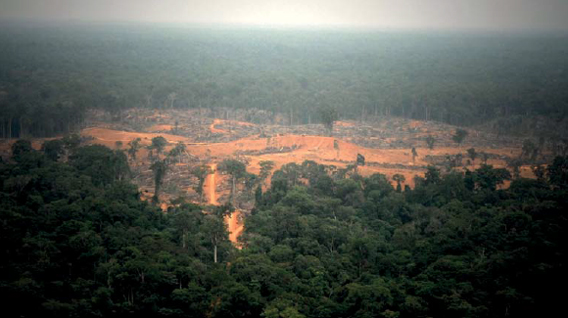 WRM says Olam’s claims to have protected forests of high conservation or high carbon value and to have sited plantations only on locations mapped as “grassland, secondary regrowth or degraded logging areas” are untrue.

“In fact, Olam hired a logging company to fell timber with any commercial value,” WRM said, “[and] the profits generated were then shared between the logging company, the Gabonese state and the communities.” The oil palm plantations could then be developed on this “degraded” land.

Olam said the allegations raised in the report are “factually inaccurate and false.”

The degradation was a result of repeated timber harvesting cycles over several decades by other companies, he told Mongabay, though Olam did recover “some marketable timber of low quality that had been ignored by the loggers.” Olam made no profit from these sales, Fairbairn said.

WRM said there was no way to check Olam’s account of when and by whom the land was originally logged, because it is withholding the documents that can establish the evidence beyond doubt.

The WRM report, which was produced in conjunction with a Gabonese NGO, Muyissi Environnement, also quotes numerous anonymous villagers describing impacts including the destruction of areas where villagers previously collected fruits and medicinal plants, the fragmentation of habitats leading to increased conflict with elephants, and contamination of water sources with agrochemicals used on the plantations.

The report says access to one forest was restricted after Olam adopted its zero-deforestation policy in 2017. Other villagers told researchers that roads are controlled by checkpoints, where guards only let through those who have company-issued permits. “If a security agent of Olam finds you carrying something you hunted or tools used for fishing, they will confiscate the meat or expel us from the places we traditionally use,” one villager said.

The report says women are particularly negatively affected because fishing is a traditional activity for them. “The OLAM people have damaged our waters, and we often catch them defecating in the lakes that still exist,” one woman told researchers.

WRM said it was necessary to keep the villagers’ contributions anonymous to protect their identities. “We have done that for several years when producing reports that expose a particular company, like Olam,” said international coordinator Winnie Overbeek.

Fairbairn told Mongabay that it maintained regular dialogue with the inhabitants of 60 villages in the vicinity of its plantations. The plantations are in line with a process to carefully balance Gabon’s development needs with the need to conserve the country’s unique forests, the company says.

“Considering the number of villages and thousands of people in the region, there may be some individuals who feel frustrated by the majority decisions, or who may reiterate issues and problems that have already been solved, and of course, some community members will legitimately raise new issues,” Fairbairn said. “However we believe the views in the report are not a balanced representation of views of the whole community.”

Lee White, Gabon’s minister of water and forestry, also rejected the WRM findings, saying Olam has conformed to the standards of the Roundtable on Sustainable Palm Oil (RSPO) and should have 100% certification by next year. Peer-reviewed studies have demonstrated that Olam’s palm plantations are carbon neutral, while Gabon, with 88% forest cover, has an overall deforestation rate of just 0.025%, he said.

This is not the first time that Olam’s activities in Gabon have come under the spotlight. A report produced by Mighty Earth and Gabon-based NGO Brainforest in 2016 accused the company of sourcing palm oil from suppliers that had cleared 20,000 ha (49,400 acres) of forest to create plantations since 2012. Mighty Earth filed a complaint with the Forest Stewardship Council (FSC), with which Olam has a “policy for association,” but this has been put on hold during ongoing discussions between the two sides.

“Olam was initially not very happy about the report,” said Phil Aikman, Mighty Earth’s campaigns director, “but after various interactions with the company and its shareholders, they agreed to a moratorium on further clearing in both the palm oil and rubber operations.”

Aikman says the FSC complaint is due to be investigated in the coming months. An FSC-appointed panel will look at how much forest was cleared; whether it was of high conservation value or, as Olam says, degraded secondary forests; and what the impact on local communities has been. That last aspect will be difficult to demonstrate objectively, he adds.

“These are common issues in the Congo,” Aikman says. “Just because they have reached an agreement with a village chief doesn’t mean everyone is happy. With palm oil development, some communities think it’s a good idea but don’t realize the impacts it will have. The WRM has produced a useful report that should be assessed by the investigation panel.”

WRM says voluntary deforestation pledges, such as that taken on by Olam, rarely work because they give the impression that an industry is properly regulated and that something is being done to lessen their impact on the environment. “They allow destructive activities to continue and expand, divide communities, weaken resistance and allow the perpetrators of deforestation and land grabbing to operate with impunity,” WRM told Mongabay in an email.