by Rafael Forsetto on 5 February 2020 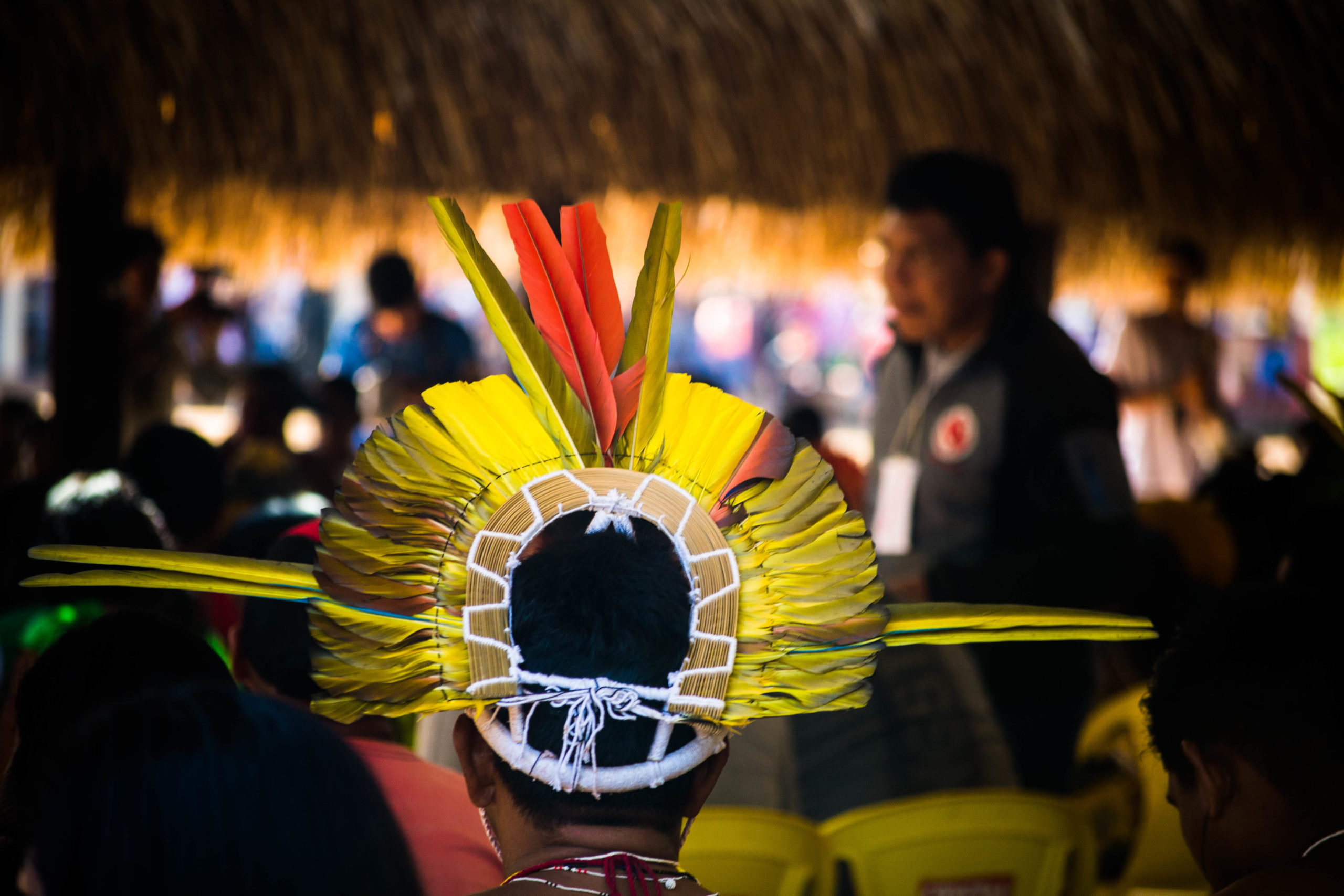 The harsh midday sun shines down in the Kayapó village of Piaraçu in the state of Mato Grosso, Brazil. Dozens of indigenous men and women sit under the cover of the House of Men, a large structure made of wood and hay that is located in the middle of the village. They are here for the Meeting of the Mebengokre Peoples and Brazilian Indigenous Leaders, a historic gathering of Brazil’s indigenous peoples to discuss the critical situation they currently face in their country. As speakers and audience members discuss and debate urgent issues, Raoni Metuktire listens attentively to the pleas and woes of those present.

The 89-year-old Kayapó leader, often referred to simply as Chief Raoni, called the meeting to help articulate a response to the Brazilian government’s incendiary rhetoric and aggressive actions against the country’s native peoples. It comes as the result of one of the most devastating years for the Amazon in recent memory. Along with the highest deforestation rates in 11 years, the violent murders of at least seven indigenous leaders contributed to the increasing hostility against the country’s indigenous peoples. President Jair Bolsonaro’s intentions of opening up indigenous lands for agribusiness and mineral extraction further intensify the already dire situation that they face.

From Jan. 14-17, more than 600 indigenous leaders from 47 different tribes met at the village, making it one of the biggest meetings to ever occur on Brazilian indigenous territory. Presided over by Chief Raoni himself, the meeting likened itself to official state negotiations, allowing time for traditional leaders, women and youths to voice their opinions. Throughout the meeting, Raoni made it clear that the indigenous peoples do not want to attack anyone, but rather to defend themselves. Speaking through translator Megaron Txucarramãe, the Kayapó leader said: “We’re not meeting here to plan for a war or conflict. We are here to defend our people, our cause, and our land … I would never call a meeting to attack someone. We are here to defend ourselves.”

Olympio Serra, a Brazilian indigenist, anthropologist and former director of Xingu Indigenous Park, stressed the historic nature of the event. “It was the opportunity that these different peoples had to answer Raoni’s call and sit down to better understand and organize an urgent plan of action against [the government’s] colonialist mentality,” he said.

The landmark debates lasted for four days and, after extensive review, resulted in the Piaraçu Manifesto, a four-page document denouncing the Brazilian government for its role in putting indigenous peoples at risk. The manifesto not only demands respect from President Bolsonaro and the government, but also clearly states that environmentally disastrous projects have no place on indigenous lands or anywhere else. “We do not accept gold digging, mining, agribusiness and leasing of our lands, we do not accept loggers, illegal fishermen, hydroelectric plants and other projects, such as the Ferrogrão, that will impact us in a direct and irreversible way,” the document says.

Brazil’s indigenous population is no stranger to megaprojects that sacrifice the environment in the name of development and profit. The BR-080 highway cuts through the indigenous territory where the meeting occurred and separates Piaraçu from its neighboring village, Pakaya. Huge trucks carrying grain cross the territory throughout the day, a visual representation of how agribusiness directly affects their way of life. During a speech at the event, Taphi Yawalapiti reiterated the importance of preserving the Amazon: “If the forest disappears, our cultures will also disappear … our languages will disappear. We need to fight for the preservation of our land; we need to unite our forces.”

Many representatives called for unity among the indigenous peoples during this difficult moment. Respect, however, was the main recurring demand during the event. “We want, above all else, respect for our lives, our traditions, our customs and the Federal Constitution which protects our rights,” the manifesto reads. Raoni and other leaders will present the final document to the National Congress in Brasília at a date not yet announced. The Raoni Institute has confirmed that the manifesto will also be available in English, Spanish and French.

Raoni himself is no stranger to the spotlight. The chief is internationally famous for his efforts to protect the Amazon and guarantee indigenous rights. Perhaps his most notable struggle is the campaign he spearheaded against the Belo Monte hydroelectric dam (formerly known as Kararaô), in the northern state of Pará. The protests spanned from the 1970s to the 2010s, but the dam was ultimately built in 2011, under the presidency of Dilma Rousseff. Nonetheless, it solidified Chief Raoni’s standing as a global figure and leading environmental activist.

Thanks to his conservation efforts, Chief Raoni’s face and emblematic lip-plate were a common sight on newspapers and television throughout the 1980s and 1990s. His boost in popularity during this time was due to highly publicized events such as the Meeting of the Indigenous Peoples of the Xingu, which received worldwide coverage thanks to the participation of British musician Sting. Since then, Raoni has lived a more reserved lifestyle away from the cameras. Recent events, however, prompted him to return to the global stage and continue his fight for indigenous rights and for the Amazon.

In 2019, he met with French President Emmanuel Macron, followed by a meeting with Pope Francis at the Vatican. This return to form did not sit well with Bolsonaro, who mentioned Raoni by name during his speech at the opening of the 74th United Nations General Assembly. In his statements, the Brazilian president said: “The vision of one indigenous leader does not represent that of all Brazilian indigenous peoples … Mr. Raoni’s monopoly is over.” Bolsonaro also used the opportunity to exalt an outspoken supporter of the government named Ysany Kalapalo as an alternative spokesperson for the indigenous cause.

The speech sparked impassioned responses all over the world, and shortly thereafter Chief Raoni’s name popped up as a contender for this year’s Nobel Peace Prize. The symbolic value of Brazil’s first laureate being an indigenous person is not lost upon his supporters. The Darcy Ribeiro Foundation is leading a campaign to rally support for the Nobel Prize.

As part of the campaign, Raoni has a full schedule ahead of him for 2020. Later this month, he will be speaking at Oxford University on environmental protection and human rights. He will also be meeting abroad with key figures to help rally support for the environmental and indigenous cause in Brazil. “The best way to do battle is through dialogue. I have been fighting ever since they started to build this road [BR-080],” Raoni says. “I don’t fight with my hands; I fight with my thoughts.”

Banner image of Tapirapé warriors before a performance during the Meeting of the Mebengokre Peoples and Brazilian Indigenous Leaders. Image by Rafael Forsetto.

This story was first reported by Mongabay’s Brazil team and published here on our Brazil site on Feb. 3, 2019.