by Débora Menezes on 7 January 2020 | Translated by Maya Johnson

The image is striking: a cross representing the first Mass held in Brazil by the Portuguese colonizers stands over a pile of Guarani brand sugar bags spilling blood out onto the floor. Above the red pool, a sign reads, “Eu sou Guarani Kaiowá,” or “I am Guarani Kaiowá.”.

The installation, a metaphor for the violence against indigenous Brazilians, was on exhibit for three months at the Centro Cultural São Paulo (CCSP) in São Paulo city, alongside a large banner reading “DECOLONIZE.” Both are references to the posture assumed by some anthropologists and advocates regarding indigenous peoples’ issues, indicating a transgression to the studies that hold the point of view of colonialism and the supposed supremacy of colonizing nations over First Nations.

“That’s really what art is for. To provoke,” says Denilson Baniwa, creator of the piece and a representative of the Baniwa, a people living along the mid- and upper-Rio Negro that runs from the state of Amazonas to the Venezuelan border. He says he believes that art can be as effective as political protests and call “attention to native issues and reach your average citizen.”

The mention of the Guarani Kaiowá people is representative of his work. Denilson  learned of their situation in 2017 in Mato Grosso do Sul, one of the Brazilian states with the highest incidences of violence against native peoples, according to the Conselho Indigenista Missionário (CIMI) Annual Report. In this state alone, 14 Guarani Kaiowá leaders were killed between 2001 and 2018, most in retaliation for attempts to access traditional lands, according to the report. “They ambush indigenous people, throw poison over the villages,” Denilson says. “These sorts of things are still rarely reported by the media.”

Aside from the symbolic cross, the exposition at CCSP also included a photo essay that Denilson called Relacionamento (Agro)Tóxico. Meu Coração é Orgânico, or “(Agro) Toxic Relationship. My Heart is Organic.”

Composed of images in which he holds fruits and vegetables at the level of his heart, it calls attention to an issue that directly affects the Kaiowá people: pesticide contamination. The issue gained prominence with the recent approval of 290 new pesticides by the administration of President Jair Bolsonaro.

Denilson also uses his art to criticize Bolsonaro’s position on environmental questions like mining on indigenous lands. In his video “Azougue 80,” the artist eats artificial fishing lures from a plate next to a glass full of mercury (called azougue in Portuguese), the poisonous metal used in gold prospecting that contaminates rivers, including those in the Yanomami indigenous territory. In the background, there’s a soundtrack of Bolsonaro chatting with someone, praising gold prospecting and comparing it to fishing. 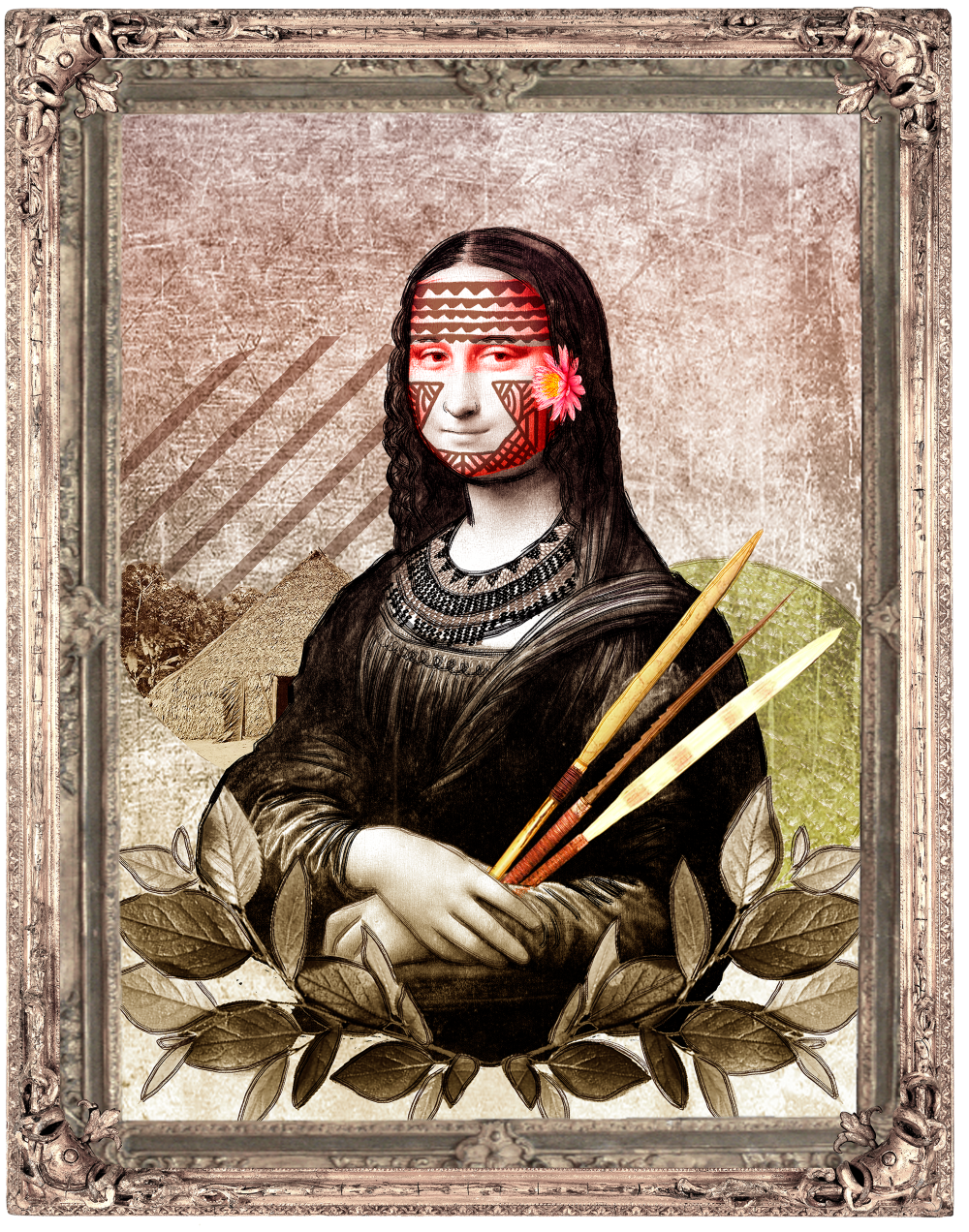 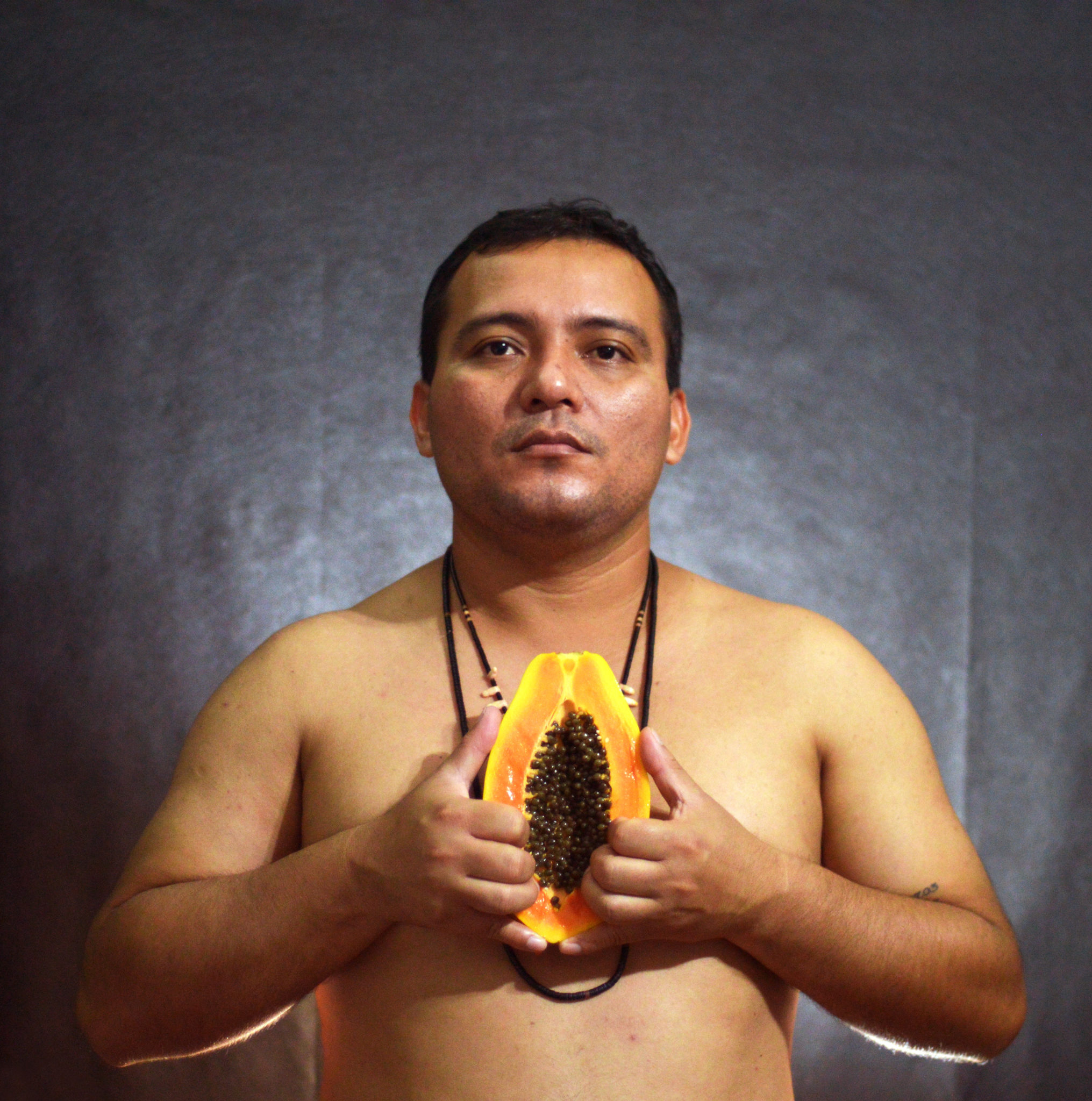 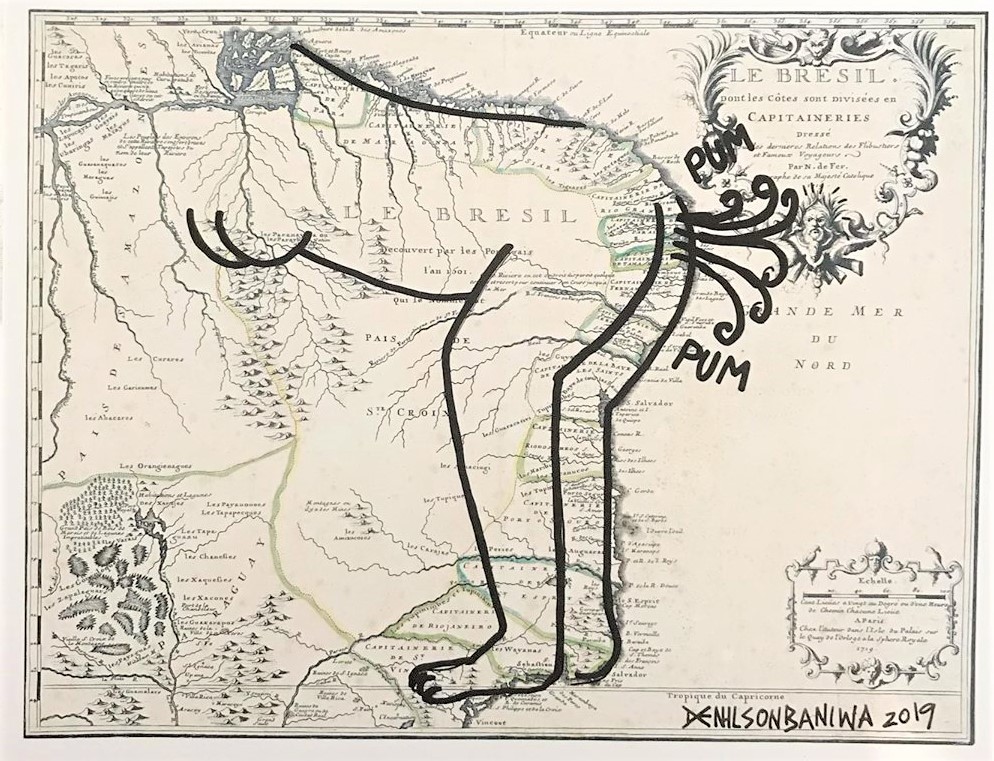 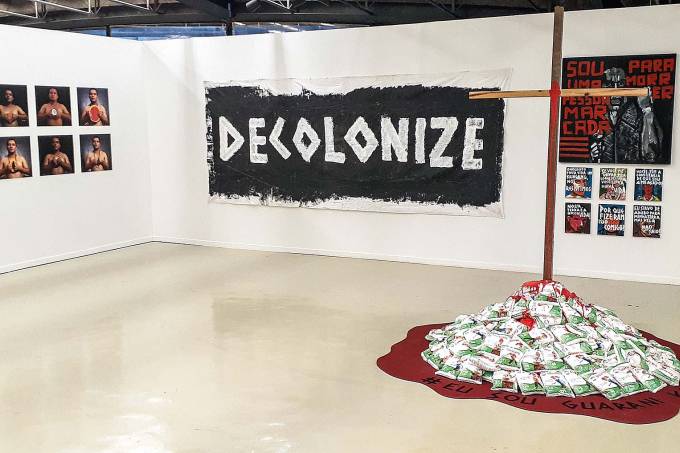 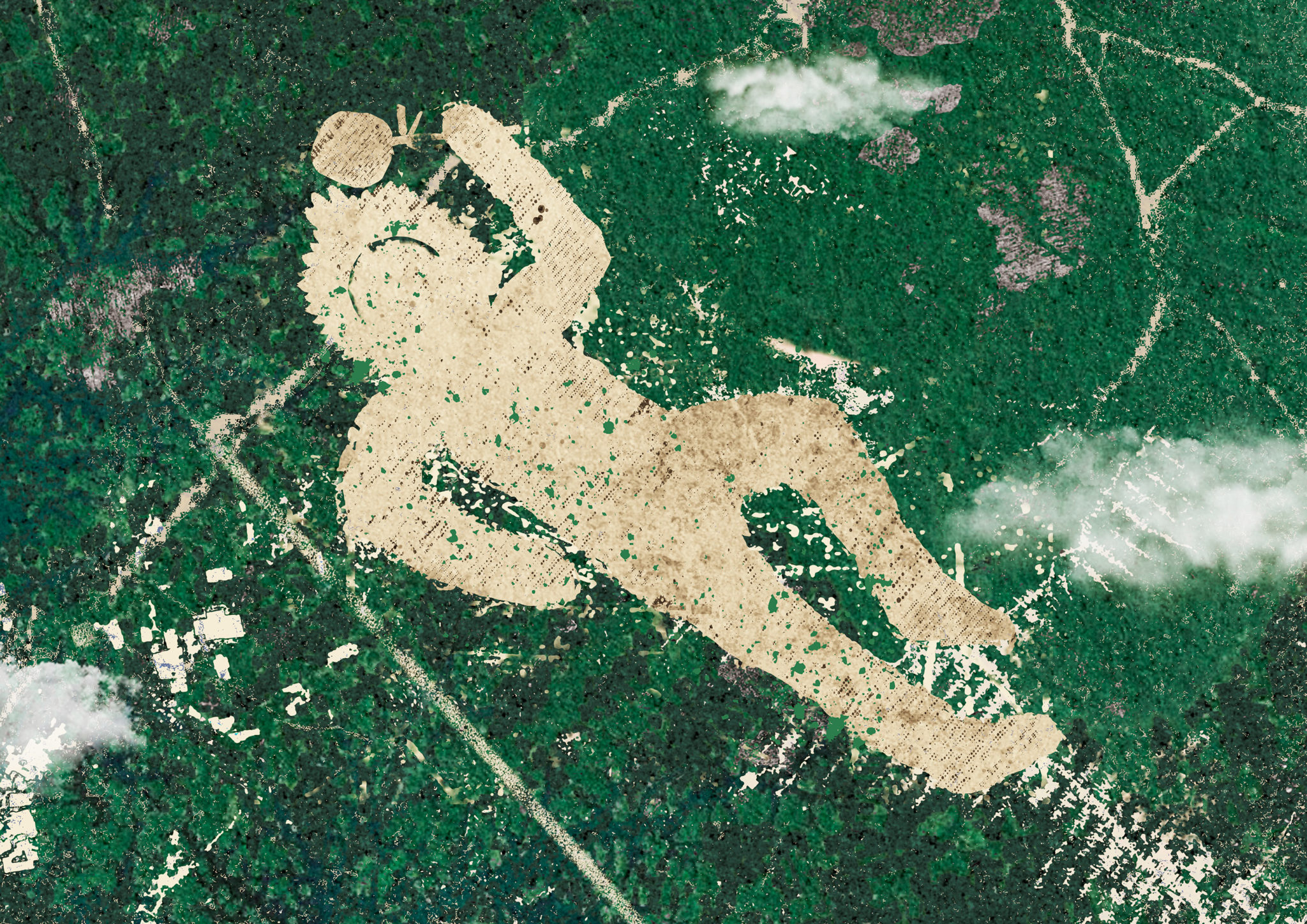 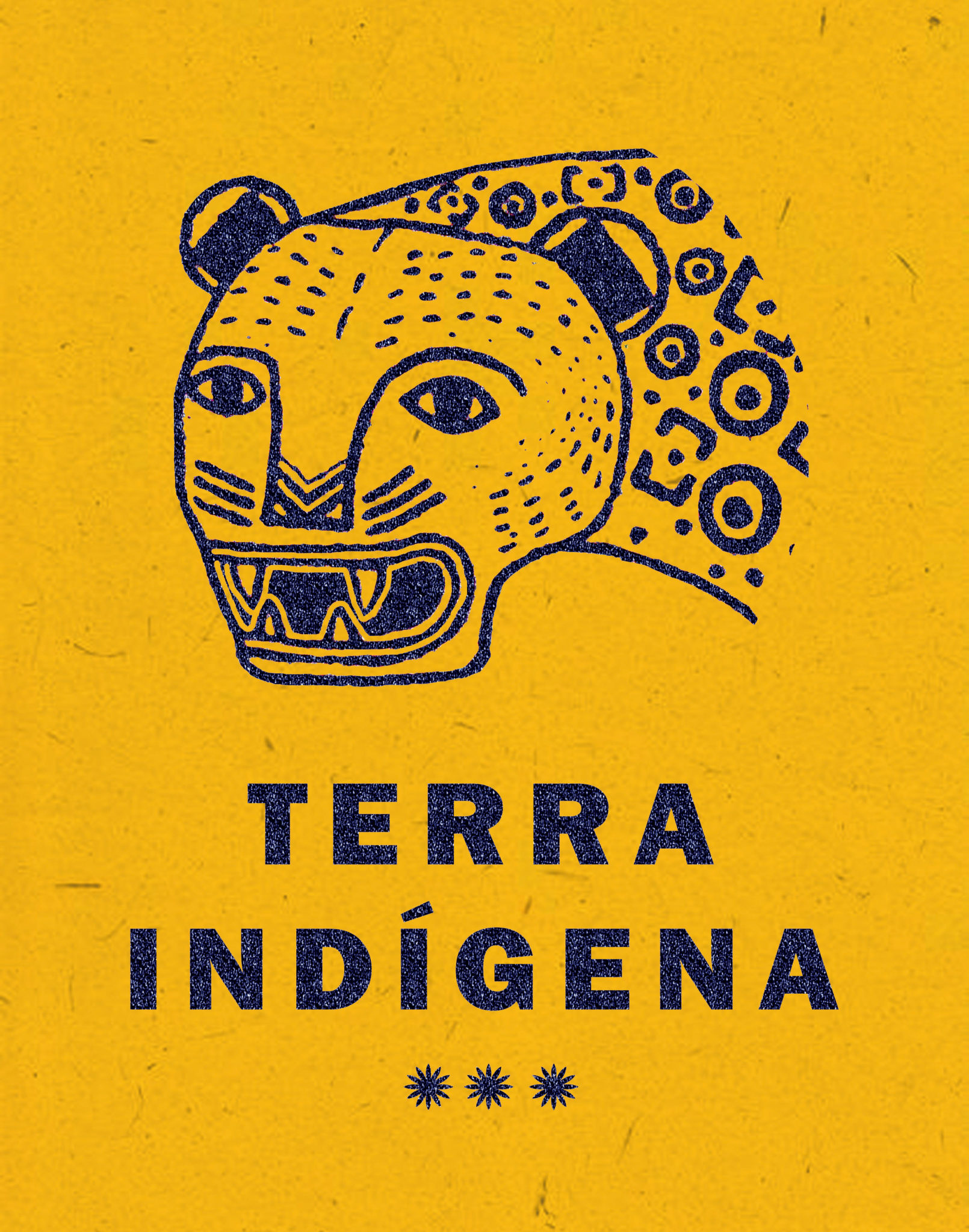 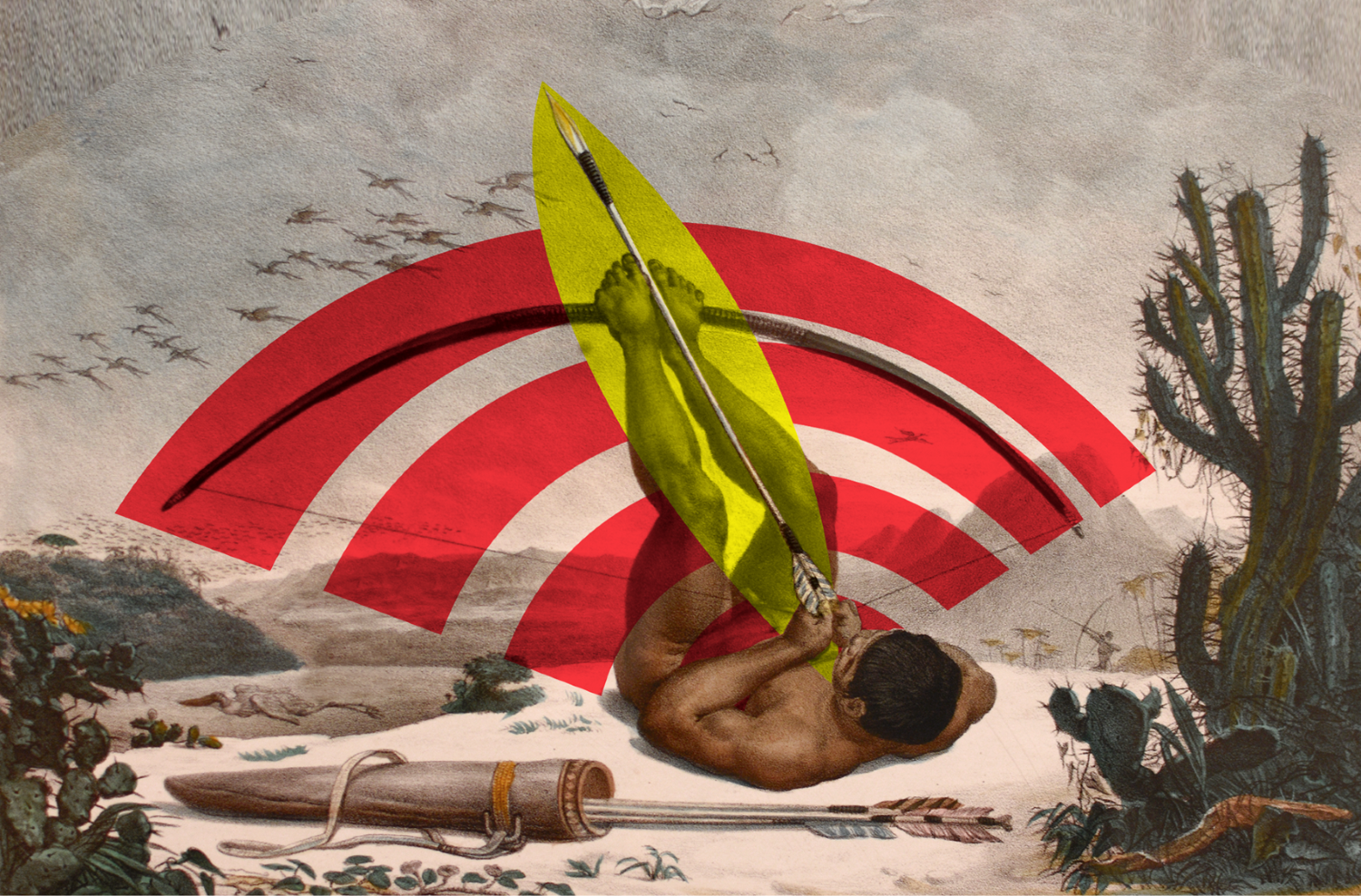 Denilson Baniwa holds an undergraduate degree in advertising and has had close contact with the struggles of the indigenous peoples’ rights movement since he was young. Born in a village in the municipality of Barcelos, in the state of Amazonas, he worked in communications for COIAB, the Coordination of Indigenous Organizations of the Brazilian Amazon, in Manaus, the state capital, when he was just a teenager. He continues to play an active role as one of the founders of Rádio Yandê, a collaborative media project involving many indigenous Brazilians.

In recent years, Denilson has occupied spaces ranging from art expositions to artist residencies in many parts of the world. In September 2019, for example, alongside indigenous artists like Jaider Esbell (of the Macuxi people) and Djuena Tikuna, he participated in the Arctic Amazon Symposium 2019, which brought together natives of the Arctic and the Amazon to explore common strategies for taking on today’s environmental issues. He also maintains a database on indigenous artists.

His work incorporates graphics, animals and references to Baniwa cosmology, but also features a touch of urban art, including wheat paste printing. Wherever he goes, he leaves a trail of posters like those he calls Terra Indígena.

“I don’t position myself as a gallery or museum artist. I do show in [exposition] spaces but prefer to occupy the city with urban art and protests,” he says.

When asked whether his work has had an effect, Denilson responds yes: “People make it a point to find out more, to understand what I’m trying to say with the pieces.” For him, the connections between current indigenous and environmental causes are what’s important and he wants people to reflect on these connections.

Having lived for years in Rio de Janeiro, Denilson says he has heard people talking about saving the Amazon and sending money to indigenous people, but he points out that “somehow, many continue feeding the monoculture that kills the Guarani Kaiowá.” He says he believes that questioning common sense, either through declarations like this or his art, can help people gain a new viewpoint on indigenous issues.

Song and language as resistance

In 2017, an indigenous vocalist sang in Manaus’s Teatro Amazonas for the first time. The region’s greatest symbol of the end of the 19th century, when rubber production drove the economy in the Amazon territory — the theater’s stage was adorned with the potent voice of Djuena Tikuna.  She was born into the Tikuna tribe, whose indigenous population of some 50,000 people is the largest in all of the Brazilian Amazon, stretching beyond the borders with Peru and Colombia.

And it was no everyday undertaking. Produced by Djuena herself, the release concert of her first CD, titled “Tchautchiüãne” (“My Village” in Tikuna), brought together music and dance groups from many ethnic groups throughout the Amazon, performing for at least 300 indigenous people in the audience. Indigenous leaders also took to the stage, including Nara Baré, the first woman to lead the COIAB, who made a pronouncement in the spirit of “Demarcação Já” (“Limits Now”), the slogan most representative of the movement calling for protection of indigenous lands.

Even though it’s located in the Brazilian state that’s home to the most native peoples, the symbolic space of the Teatro Amazonas carries a long history of negation of indigenous people, as recalled by singer Marlui Miranda at the release concert when she was invited to sing together with Djuena Tikuna. Miranda told the story of how she was booed in 1979 when she performed a song in the native Suruí language, from the neighboring state of Rondônia, in that same theater.

“Many people think that Indians are just some people isolated in the woods,” Djuena said. “I’m proud because I have been able to relay the message that we, the indigenous people, must fight for our space, fight for our rights. To sing in the Teatro Amazonas is a way to be fighting and resisting,” she declared in a video made by young indigenous women living in the Parque das Tribos in Manaus.

The 2017 show, however, wouldn’t be the only one: Djuena continues to perform regularly at the Teatro Amazonas. Once, she even sang the Brazilian national anthem in the Tikuna language.

‘Indians need to be where they want to be’

Djuena Tikuna, who has a college degree in journalism, says one of her dreams is to write many articles on her recently launched website. The site represents a great victory for a girl born on the outskirts of the municipality of Tabatinga, along the triple frontier between Brazil, Colombia and Peru, and who only learned to speak Portuguese, Brazil’s national language, at the age of 10.

Like Denilson Baniwa, Djuena also defines her trajectory as an artist in terms of advocacy and indigenous resistance to the aggressions of white men. The Tikuna language is the basis of her work, which includes traditional songs and her own lyrics on both her first and second CDs (“Wiyaegü,” which means “Fished People”), a project that includes both a book and a documentary.

“I don’t sing just to sing,” she says. “It’s much more than that. It’s to try and show that we have to value who we are and what our ancestors taught us.” For her, singing is also a form of advocay — for health, education, territory and access to culture. For five years, she has been part of the Acampamento Terra Livre, a demonstration that brings native women from across the country together in Brasilia, the national capital. During the last event, aside from singing, Djuena also participated in the collaborative coverage of the Mídia Índia movement, in which indigenous people produce news reports, videos and photos. “That’s when you begin to see how the indigenous movement is gaining strength, in spite of the struggle,” she says.

But it is in spreading her music that she prefers to address indigenous issues. Aside from a European tour in 2019 in France, Belgium and Portugal, Djuena is also touring Brazil with other native artists as part of the Social Service of Commerce’s Sonora Brasil project. The series, which runs from 2019 to 2020, is opening important spaces for the debate on the Amazon and the diversity of the people who live there. “Visibility is to occupy spaces,” Djuena says. “Indians need to be where they want to be.”

Banner image of part of the Pajé-Onça (Shaman-Jaguar) performance at the 33rd Bienal de São Paulo in November 2018.

This story was first reported by Mongabay’s Brazil team and published here on our Brazil site on Dec. 18, 2019.