According to reports, COP25, the UN climate negotiations that concluded in Madrid, Spain last week, did not yield any progress in terms of more ambitious emissions reduction pledges.

But there was at least one bold new commitment to report on: The governments of all eight members of the Central American Commission for Environment and Development (CCAD) — Belize, Costa Rica, the Dominican Republic, El Salvador, Guatemala, Honduras, Nicaragua, and Panama — presented an ambitious regional climate action plan, known as the “5 Great Forests Initiative,” that includes a pledge to protect Mesoamerica’s remaining intact forests as a natural solution to the global climate crisis.

“Nearly 50 percent of the carbon in Mesoamerica is stored in the five great forests,” Carlos Manuel Rodriguez, Costa Rica’s Minister of Environment, said at COP25. “I hope that I won’t be back here in the future talking about the 10 medium-sized forests.”

The 5 Great Forests Initiative was launched during Climate Week in NYC last September by a coalition of four Central American countries, CCAD, and local and international NGOs. The presentation at COP25 was the first time the governments of all Central American countries stood together with indigenous peoples and members of local communities, whose leadership is seen as critical to forest conservation efforts, in support of the initiative.

The “five great forests” of Mesoamerica are the Maya Forest in Mexico, Guatemala, and Belize; the Moskitia in Nicaragua and Honduras; the Indio Maíz-Tortuguero in Nicaragua and Costa Rica; the Talamanca Region in Costa Rica and Panama; and the Darien in Panama and Colombia.

These forests collectively cover more than 120,000 square kilometers, or more than 46,000 square miles. They are considered biodiversity hotspots, providing crucial habitat to more than 7.5 percent of the planet’s wildlife species, including iconic species like the jaguar and the scarlet macaw as well as rare and endangered species like Baird’s tapir, the black-handed spider monkey, and the critically endangered Central American river turtle.

The health of the five great forests of Mesoamerica has important implications for the wellbeing of humans, as well, as they sequester nearly half of the region’s forest carbon, making their protection crucial to efforts to halt global warming, and help furnish clean water, clean air, and other vital ecosystem services to 5 million people.

Yet tree cover and primary forest loss have accelerated in Mesoamerica in recent years. Since 2000, three of Mesoamerica’s five great forests have been reduced by more than 23 percent, according to Global Wildlife Conservation, one of the NGO members of the 5 Great Forests Initiative. The overwhelming majority of that forest destruction is due to global demand for beef and other cattle products, as illegal cattle ranching is responsible for some 90 percent of the deforestation that has occurred in the forests. 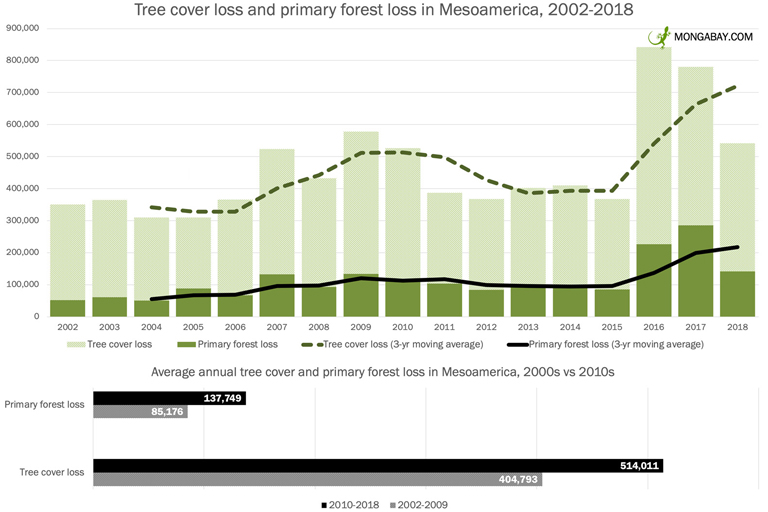 “We are sad to see the forests of the Amazon burning and the impacts on indigenous people,” Cándido Mezúa of the Mesoamerican Alliance of Peoples and Forests, another NGO member of the alliance, said in a statement. “In Mesoamerica, we have our five forests. They still exist. We can still protect them, and even expand them.”

Ending all illegal cattle ranching within the forests is among the objectives of the 5 Great Forests Initiative. The alliance also seeks to ensure that no wildlife species in the great forests goes extinct, while protecting 10 million hectares (nearly 25 million acres) of land and restoring 500,000 hectares of forest. Additionally, the initiative aims to improve the livelihoods of forest-dependent peoples, especially members of indigenous and local communities within the five forests.

“The five forests alliance is not a project, but a movement,” Jeremy Radachowsky, WCS’s regional director for Mesoamerica and Western Caribbean, said in a statement. WCS is a member of the 5 Great Forests Initiative. “We’ve been honored to join with government and indigenous partners at the COP25, but the hard work lies ahead. We must come together [to] protect Mesoamerica’s five great forests, and we invite anyone who can help to support this critical initiative.”