ANJA COMMUNITY RESERVE, Madagascar — When the Anja Community Reserve opened in 2001 the organizers of this bite-size protected area along the highway knew they’d need to come up with some way to convince tourists that Anja was worth a stop. Or, at least, come up with a way to convince their drivers. So they put out the word that anyone who brought their passengers to Anja would earn a small incentive — around 20 cents, 10 percent of the entry fee. It was a slow start. At the time, said Victor Rahaovalahy, a co-founder of the reserve, “Only one or two tourists came here every three weeks.”

Nearly 20 years later, Anja has grown into a powerhouse of community-led conservation in Madagascar. The small forest fragment that spurred the creation of the protected area remains intact, and the local association that runs Anja, Association Anja Miray, has begun to expand it by replanting native trees on the surrounding hillsides. The reserve now earns enough revenue to employ 85 guides and animal spotters and to fund a wide array of community projects, including construction of two primary school buildings and distributions of blankets for elderly residents and seeds and inputs for farmers at the start of the growing season.

The success has drawn international attention. Anja Miray’s president has traveled to Brazil and Australia to share lessons learned with grassroots conservationists from around the world, and in 2012 the association won the prestigious Equator Prize, part of a global U.N.-led initiative to promote “nature-based solutions for sustainable development.” A case study by the U.N. Development Programme completed the very next year calls Anja Miray “a benchmark for community-based tourism in Madagascar [that] has served as a model for replication.” But Anja’s potential as a model for similar projects is complicated by a factor that’s particularly hard to match in Madagascar: location, location, location.

Anja’s ticket office sits just 50 meters (160 feet) from the highway that leads to Madagascar’s capital, Route Nationale 7 (RN7). Julia Jones, a scientist with Bangor University in the U.K. who studies the effectiveness of conservation initiatives in Madagascar, recalled being hired to accompany a group of community conservation leaders from around Madagascar to the site in 2005 as part of an effort aimed at sharing best practices. “It was just hilarious, because literally all of them arrived here and went, ‘Yeah, there’s kind of a difference between where I’m from and this,’” Jones said. “This is on the RN7: Everyone who’s anyone stops here when they’re driving south, including donors, including tourists … Where we come from, [it’s] bumpety bumpety road for three hours and then walk for two hours.”

Rahaovalahy wasn’t eager to contemplate what it might have been like to launch Anja without the benefit of a major highway passing by. “Even if the RN7 wasn’t here,” he said hopefully, “we would have worked to find a solution.”

In a country where only three national parks achieved 30,000 visitors in 2018, Anja — less than one tenth the size of Manhattan’s Central Park — saw more than 12,000 last year. Those numbers may be closely related. Scan the web for vacation itineraries proposed by bloggers and tour operators, and Anja figures prominently as a pit stop halfway between Isalo National Park to the south and Ranomafana National Park to the north, both among the most visited sites in the country. It’s also en route to trekking trails in the Andringitra Mountains surrounding Madagascar’s highest peak. Crucially, the stop to look at lemurs in Anja tends to be presented as a way to break up a long travel day, which anyone who has explored Madagascar by road will take as a welcome suggestion.

The combination of Anja’s size and its proximity to the road make it an unusually easy place to spot wildlife. On a visit to the reserve one morning in early August, a group of French families with small children oohed and ahhed at a male Malagasy giant chameleon (Furcifer oustaleti). The squirrel-sized, black-striped lizard was balancing, head high, on a tiny branch less than a five-minute walk from the pavement. When a bus full of British exchange students reached the same spot, the French group moved along, and encountered a clutch of ring-tailed lemurs (Lemur catta) 100 meters (330 feet) down the path.

Every visitor pays a 20,000 ariary entrance fee (about $5.50) along with a group fee starting at $20 for a two-hour tour of the forest, including a peek at a historical tomb. Forty percent of the revenue goes to maintaining and improving the site itself, including firebreaks and tree planting. Another 29 percent funds community and social projects, like the purchase of raw materials for association members to make handicrafts and stipends for the care of orphaned children. The remainder funds the operation of the association itself. Last year, ticket sales at Anja generated more than $30,000, even though entrance fees were half what they are now. That may not sound like much, but in a country with a per capita GDP of less than $500 a year, it’s a substantial injection of cash for a small rural community. 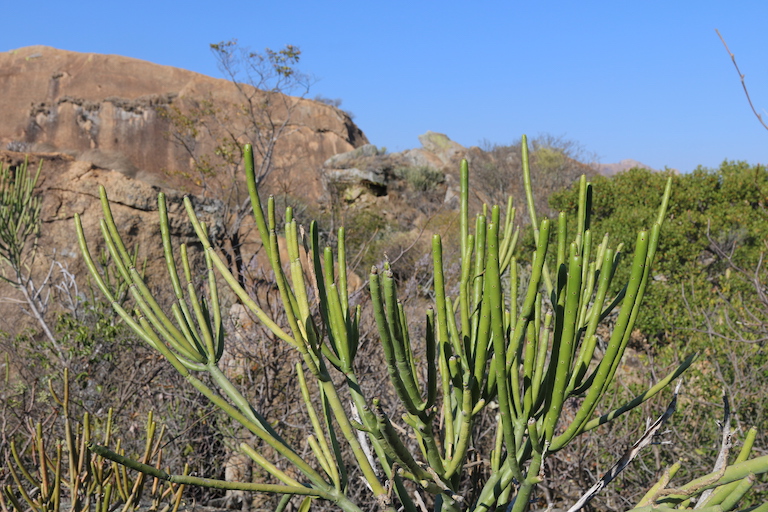 At the start, Rahaovalahy said, Association Anja Miray struggled to recruit a tiny cohort of 20 supporters for its efforts to conserve the forest inside the new protected area, even with the backing of the government, which had transferred management of the forest fragment to the community in 2001 as part of a national campaign. While some people valued the forest as the source of a spring that irrigates rice fields for part of the community, others worried the protected area would deprive them of wood and farmland. “People were already farming inside the protected area,” Rahaovalahy explained. “They were very angry.”

One early project that helped build more widespread support for conservation was paying for circumcisions for young men in the surrounding area, a traditional rite of passage that is now commonly done at a medical clinic. Today, the association boasts 650 members, most of the community, who pay modest annual dues in exchange for certain extra benefits like seeds and fruit tree saplings. According to the census that guides carry out annually during the low season, the lemur population has increased from 80 when the reserve was founded to roughly 350.

Dan Villar, a fourth-year Peace Corps volunteer who works with a fledgling protected area nearby, Sakaviro Community Park, said Anja’s visibility has created “an upward spiral of positive feedback, whereby it can continue to develop and gain recognition.” Villar said members of the association in Sakaviro clearly look to Anja as an example, but they’ve had trouble drawing tourists to the site without more support to promote it online. “Here, seeing is believing, and people have not really seen the park have success,” he said.

As it stands, Sakaviro continues to struggle with illegal woodcutting and periodic fires. Like Anja, Sakaviro has abundant ring-tailed lemurs along with birds and reptiles. Although it’s only 5 kilometers (3 miles) from the RN7, even that distance, along a rough dirt road, gives it far less visibility and seems to discourage visitors. The park sees just one or two groups a month, with many of them booking tours by phone after visiting a Facebook page Villar set up.

The legal framework that permitted so-called “transferts de gestions,” or transferals of land-management authority from the government to community groups like the ones in Anja and Sakaviro, passed in 1996. As Madagascar’s protected area network expanded beyond the footprint of traditional national parks in the late 1990s and 2000s, donors and international NGOs worked with the Malagasy government to create thousands of local forest management associations, usually with an explicit promise that conservation programs would be tied to support for rural livelihoods. But investment in these sustainable development initiatives has often come years after restrictions on local people’s use of natural resources — if at all.

Researchers in Madagascar have repeatedly demonstrated that such restrictions imposed by conservation projects have the potential to cut into household income or rural livelihoods, whether calculated in cash — one report estimated an annual hit of $1,400 per household — or lost access to bushmeat. Along with improvements in farming techniques, ecotourism is often presented as an important prong in the strategy to reverse this trend.

But there’s a risk in setting up community conservation programs in Madagascar under the assumption that they can rely on ecotourism to generate meaningful local income. A 2013 analysis by the International Union for Conservation of Nature and Natural Resources (IUCN), for instance, singles out Anja alongside another well-known community ecotourism operation, the Analamazaotra Forest Station near Andasibe National Park in eastern Madagscar. “It comes as no surprise that both are situated along ingrained tourist routes, benefitting from geographic location and existing infrastructure,” the authors note.

Consider the experience of the Lemur Conservation Association, a consortium of universities and zoological gardens across Europe that has made a concerted effort to promote ecotourism in northwestern Madagascar. Despite a collaboration with an established tour operator, the initiative’s annual report offers a frank assessment of the challenges facing comparatively remote ventures like theirs: “Tourists had to walk about three hours to join the camp and many of them complained about the long walk.” Poor cellphone service and an unreliable water supply posed additional problems.

Other would-be ecotourism destinations have suffered from an “if you build it, they will come” approach by government organizations and large NGOs. In a master’s thesis based on research in the region around Anja, Sam Cameron, program coordinator for the Fianarantsoa-based NGO Ny Tanintsika and a partner organization in Scotland, describes a variety of “white elephant” infrastructure built to welcome tourists who never came. In Namoly, a community near the entrance of Andringitra National Park in southeastern Madagascar, for instance, the global NGO Conservation International funded the construction of a trail network in a community-run forest that soon became overgrown. As one resident put it to Cameron, “We should really do maintenance but why bother when there’s no income from tourists? It’s like working rice-fields that have no water.”

Cameron said inflated hopes of income from ecotourism often backfire, and reinforce conflict in community organizations working on conservation. As a result, she said, people feel misled and end up “fighting over the really small advantages that do come.”

More broadly, like so much else in conservation, ecotourism’s viability hinges on major political forces that are beyond the scope of any one destination. After a coup d’état that ousted the president in 2009, international arrivals in Madagascar fell by nearly 60 percent; a decade later, they have yet to rebound to 2008 levels.

And then, of course, there are the roads. Despite the fact that the average international visit in Madagascar lasts three weeks, there’s only so much you can see when travel on the heavily potholed two-lane national highways is so slow. In the absence of better infrastructure, going off the beaten track often means giving up one or more vacations days for travel.

But a good reputation helps. Barbara Vanlaere, who was visiting from the Netherlands with her husband Geert and their two grown children, said her family went out of their way to come to Anja. “We passed two days ago, and we made a detour to come back to be here in the morning,” she explained, gesturing at the massive telephoto lens around her husband’s neck. If you’re in Anja at the right time of day, they’d heard, you’re practically guaranteed to see lemurs.

Rowan Moore Gerety is a reporter and radio producer in New York. His work has appeared in Harper’s Magazine, Scientific American, and on National Public Radio, among other outlets, and he is the is the author of Go Tell the Crocodiles: Chasing Prosperity in Mozambique.